While solving her own problem, Jodi Pliszka developed a bankable product. 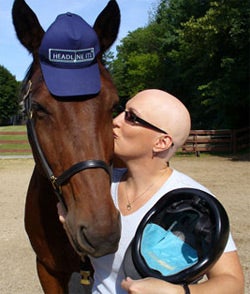 Jodi Pliszka gives her horse, Leo, a kiss after a strenuous ride. She uses HeadlineIt inside her helmet to prevent sweat from rolling into her eyes.

Jodi Pliszka is a clinical therapist by background, and an author and inventor by circumstance. Pliszka has alopecia, an autoimmune disorder that treats hair as an infection and kills it. She's been wearing wigs since she lost her hair at age 20. And therein lies the problem that prompted Pliszka to become an inventor.

She leads an active lifestyle as a triathlete and a black belt in tae kwon do. But being active when you wear a wig means that sweat, salt and oil gather on your scalp and roll into your eyes, especially in Pliszka's case: Alopecia eliminated her eyebrows as well as her hair. Says Pliszka, "I needed something that would keep the sweat out of my eyes while exercising and add longevity to my expensive wigs, hats and helmets."

After a fruitless patent search for potentially useful products, she decided to try her hand at creating her own. The result was HeadlineIt, an ultrathin, lightweight, disposable liner for hats, helmets and wigs--a product she spent $350,000 developing. She expects sales this year to climb above $500,000, and she has her sights set on topping the $1 million mark in 2010. She has a design patent on the product and anticipates approval of her utility patent shortly.

Pliszka began the invention process in 2001 with a synthetic car chamois she had on hand. She tested various shapes and hot-glued the final design to fit comfortably inside a wig. "It worked like a charm," she says. "But I needed something that would be more high-tech and have more benefits and not just be this big chunk of material."

It took nearly three years to get the design patent. In the meantime, she wrote two award-winning children's books, starring her sphinx hairless cats Bella and Gizmo. The books reach out to children who are different in some way from their peers.

In 2005, Pliszka's first book, Bella and Gizmo's Adventures: The Hairless Sphinx Cats, was published. The next month, she received her first patent.

TV's American Inventor got wind of her invention in 2006 and invited her to audition. "They must have searched through the patent office looking for interesting inventions," Pliszka surmises. Selected as a finalist, she went to Los Angeles for 2½ months. "They took away our computers and our cell phones. It was wonderful. We got to sit out there and work on our projects uninterrupted--except for the cameras shooting us 24/7." She was granted five minutes each night to talk to her family.

Top scientists helped her find the materials she needed for her HeadlineIt prototype. "I was like a little kid in a candy store," she says. "I had laid out all of these specifications. I wanted it to be able to breathe, be lightweight and pass sensitivity testing." The scientists came up with an array of high-tech materials and helped her test them.

Perfecting the shape of the liner was another months-long project. "It's all physics," she says. "It's notched so, as you hold it in your hand, it cups to fit any size or shape of head without having to size it." In a big hat, it expands to nine inches; in a child's hat, it will lie smoothly without lumps.

There were plenty of additional details: finding an adhesive that wouldn't stick, ruin the cap or wig or leave residue behind; sourcing the materials; teaching the manufacturer how she wanted the product folded and placed in the box; obtaining a bar code; selecting the shipping cartons; and determining appropriate labeling on the cartons.

Pliszka finally put the product online in 2007, and it sold instantly.

Her first target was the medical market, including hospitals and cancer centers. "My main focus was making a product for cancer patients to save them time, because every cancer patient needs more time," Pliszka says. The product also saves them money because they don't have to replace their wigs as frequently.

"It's gone bonkers," Pliszka says of her product. "It's the No. 1 accessory for wigs."

Tips for Inventors
Pliszka has plenty of advice for would-be inventors:

By 2008, she was ready to launch HeadlineIt's active version. HeadlineIt accounts include safety distributors such as Grainger Industrial Supply, as well as QVC London, Valero Energy Corp., Sunoco, Chesapeake Energy, Alliance Energy, Pepsico and the U.S. Marine Corps. "We've donated thousands of liners to our troops," Pliszka says. Distribution has expanded to seven countries, she adds.

Four-time Olympian Sheila Taormina used HeadlineIt while competing in the modern pentathlon in the 2008 Beijing Olympics. "The liner kept sweat from dripping into my eyes, and I had the best show jumping performance of my career," Taormina says in an endorsement on the HeadlineIt website.

HeadlineIt remains a home-based business, although Pliszka has about 35 manufacturing and catalog representatives and a distribution facility that stores and ships her product.

Her dad is the CFO, and her mother is a silent partner who assists with the accounting.

"Losing my hair helped me find who I am. God gave me a shiny bald head, a good education and a voice to make a difference in the world," Pliszka says. "I truly believe in walking through the doors that he opens for me."

No matter what she does, Pliszka says her main focus will always be helping people. Sometimes that means helping people psychologically. With HeadlineIt, she can help people physically, as well.

Still, Pliszka says, "My greatest accomplishment is making a little sick kid be able to smile and come out of her shell because she sees this bald lady read this book [about being bald] with this little bald cat in her arms."