Why Fab Is Bleeding

By Andrea Huspeni
November 22, 2013
Opinions expressed by Entrepreneur contributors are their own.

Once a media darling, lately Fab has been in the spotlight for reasons it would rather not be.

From the continuous management shuffle to layoffs and pivots, Fab has seen more shakeups than a James Bond martini. And with these restructurings, the New York City-based ecommerce site has been hemorrhaging uncontrollably. When it will stop, no one knows.

A company in turmoil.
The bleeding began this past April, when Fab announced it was changing its business strategy --moving away from its flash-site model, where it sold limited-supply items, to a more traditional, global storefront. At the time, CEO and co-founder Jason Goldberg said he wanted Fab to become "the world's No. 1 design store" and was looking to take on Ikea and Amazon.

Since this grandiose plan, the company has gone through several layoff rounds -- the most recent being last week, where it gave 81 staff members in its New York office their three-month notice. In July, the company axed more than 100 jobs among its European staff, a move made to eliminate duplicate positions in its Berlin and New York offices. And again this past October, the ecommerce company reduced its staff by 20 percent, citing technological advancements and costs as reasons.

Related: Fab Cuts 20 Percent of Staff in Fresh Round of Layoffs

Since April, more than 10 executives and high-level managers have left Fab, including its chief marketing officer and the head of European business. Fab COO Beth Ferreira will be leaving by year end.

By far the biggest blow is the departure of Fab's visionary co-founder and chief design officer Bradford Shellhammer, who announced his exit earlier this month. In the past, co-founder Jason Goldberg often cited Shellhammer as Fab's secret weapon. For instance, when a journalist asked about Fab's competitors, Goldberg replied, "This is a taste business. They didn't have a Bradford." 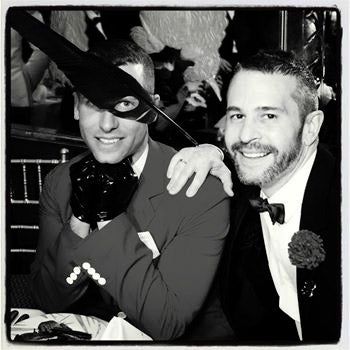 Well, now, neither does Fab. And as the person that approved every single item to appear on the website, his shoes will be hard to fill.

In addition to eliminating positions, the company has also cut verticals, specifically vintage, food and pet categories, in order to have a more narrow focus. Amid all the changes, both Goldberg and CTO and co-founder Nishith Shah decided they will not take a salary in 2014.

While this restructuring seems drastic -- given the short time period, along with the number of shakeups – Fab maintains it was necessary to get the company on track.

"Fab is undergoing management changes as we realign the business to execute on our 2014-2017 plan," says Deborah Roth, senior vice president of global communications at Fab. "There will be a number of management changes involved as we streamline the organization."

What went wrong.
Prior to these change in strategy, Fab was focused on growth over profit. The company raked in $115 million in sales in 2012, but while its top-line revenue was growing massively, so were expenses.

To increase brand awareness for its flash-sales model, the company had taken on high customer acquisition costs. Howard Morgan, a partner at First Round Capital, a firm that invested in Fab, told The Wall Street Journal, "We had a great group of customers who bought a lot and other customers who came once for a sale yet they were not long term profitable," he says. "We were paying a lot to get them, but they were not profitable."

These costs, plus other advertising channels, bloated Fab's marketing budget to $40 million, or 35 percent of revenue, in 2012, a figure Goldberg has said he wished was $10 million less.

Plus, running a strictly daily-deals site is logistically tough and takes resources -- everything from uploading inventory, determining shipping and return strategy, having customer service in place, writing content and perfecting images.

"Just the nature of the flash-sale business is that basically every single day you're opening a new store with hundreds, if not thousands, of products," Goldberg told AllThingsD earlier this year.

This can start to eat at a company's revenue. Fab was seeing 29 percent gross margins in 2011 (presently they are at 43 percent). Something had to give: The company needed to trim the fat and put more of a focus on narrow and deep, not wide and shallow.

"To get profitable while providing our customers with benefits like exclusive merchandise, free shipping, free returns, and low prices, we can't just grow revenue. We also have to carefully manage our costs," Goldberg told employees in an internal memo.

Was Fab's fall inevitable?
From where Fab started and where it is today, this possibly was the only route it could have gone to become a household name.

When Goldberg and Shellhamer launched Fab in 2010, the pair had originally set out to create a gay men's social network, known as Fabulis. After a year of seeing little traction and having blown $2 million in investor money, the duo decided to pivot to a daily-deals site.

In 2011 Fab was born. Incentivizing subscribers through the refer-a-friend model, where people got perks like discounts and free shipping, when their friends joined or made a purchase, along with creating an air of exclusivity with its invite-only model, Fab grew to be one of the fastest, if not the fastest, e-commerce company on the web. The first day Fab sold $65,000 in merchandise and 18 days later, it had $1 million in sales. Less than three and a half months in, the company had one million subscribers.

Fab through the years:

These metrics caught the attention of investors, all banking of this flash-sales model to be big. In 2011, the company raised more than $48 million in funding from tech honchos like Andreessen Horowitz, First Round Capital, SV Angel and SoftTech VC.

Unfortunately, for investors involved, the flash-sale model didn't pan out and Fab is experiencing the repercussions.

Not only are they seeing a management shuffle but Fab's numbers are looking grave. In October the company had 673,364 total visitors, down 5.5 million total visits from its two-year peak in November of 2012. 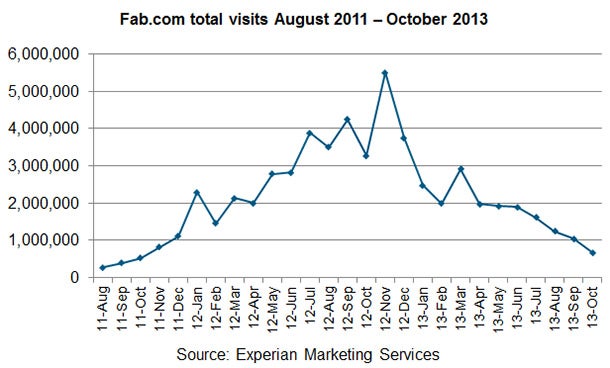 The company is also rumored to miss its $250 million revenue target this year, a similar story to 2012, when it missed its stretch revenue goal by $25 million.

That said, no one can argue that Fab has seen tremendous growth through customer acquisition, developing a strong brand presence and creating strong relationships with vendors. More than 14 million have registered with Fab, a product gets sold every five seconds, the company has worked with more than 15,000 global designers and it has a presence in 30 countries. Chances are good the company would not have scaled so quickly had it decided to take the traditional route and open a conventional e-commerce store.

Also Fab is in the business of e-commerce, an industry that takes time to develop. Case in point: Amazon launched in 1997, has raised more than $3.3 billion and is still not profitable.

Investors still have faith in Goldberg and are expecting him to turn Fab into a profitable company within 18 months, according to The Wall Street Journal. This year alone, Fab has raised $165 million. Whether that will be enough to start Fab's healing process remains to be seen.