Why Man vs. Food Is Worth Watching

By Carol Tice
August 3, 2012
Opinions expressed by Entrepreneur contributors are their own. 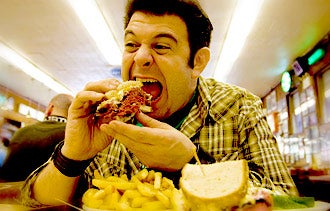 I am not a fan of eating contests. They seem to symbolize the worst of American excess. Despite that, I've gotten hooked on Travel Channel's show Man v. Food.

What makes this show appealing, even if the quantities of food consumed are often appalling? Man v. Food has seen four successful seasons with a fifth airing soon, and seems to air nearly round-the-clock, all thanks to the charming personality of host Adam Richman.

Like any good leader, the affable Brooklynite brings personal qualities to his role that make you want to follow what he's doing. How has this man conquered not just food, but TV?

Here are the facets of Richman's personality that have made the show a hit:

1. He's likable. Unlike so many haughty restaurant celebrities, Richman won't be found shouting angrily at anyone or telling them the dish they slaved over is inedible. He's polite and charming. His mom even appears in some episodes. Given the general trash-talking tenor of most reality TV, Richman succeeds by being refreshingly nice.

2. He's curious. This man doesn't just swoop down on an Amish diner or a Southern shellfish shack and inhale vast quantities of food in record time. First, he talks to the owners and learns their story. Where did they learn to cook this food? Why is this their passion? What ingredients create the unique flavors? When he sits down to partake of the local signature dish, he's fully briefed on what makes it special, and so are we.

3. He's brave. A leader should be willing to take on the tough challenges, as Richman does when sweating through a meal rife with ghost chilies or tackling a 12-egg omelet. Even while you're moaning, "Ewww, gross!" from the safety of your couch, you admire that he's crazy enough to try it.

5. He shares the spotlight. Though Richman's mug is ever-present on the show, he makes each episode a celebration of the towns and eateries he visits. Richman has also evolved the show into a new iteration, Man v. Food Nation, in which local participants shoulder some of the food challenges. This key decision, to stop doing all the overeating himself, should help ensure long life for both Richman and the Man v. Food brand.

How does your business reflect your personality? Leave a comment and let us know your key traits.