July 23, 2019
Opinions expressed by Entrepreneur contributors are their own.

Yuri Elkaim's childhood was plagued with health issues, from asthma to eczema and chronic fatigue. Although he was a star athlete, he was always tired after soccer practice. One night, just days before his seventeenth birthday, the exhaustion was almost too much to bear.

Elkaim stepped into the shower and began lathering with shampoo. When he looked down at his hands, they were covered in clumps of hair. Panicked and confused, he jumped out and looked in the mirror. A bald patch the size of a quarter stared back at him. "What is happening to me?" he wondered.

The next morning, he woke up to a pillow covered in hair. The rest fell out within weeks — including his eyebrows and eyelashes.

The hair loss marked the beginning of a lifelong health journey, which started with finding answers to his own questions and led him to helping others do the same. Elkaim eventually built a seven-figure health and fitness empire, stumbling through years of trial and error along the way.

At the pinnacle of his industry, he decided to help other "healthpreneurs" find the same financial freedom he had by scaling their businesses the right way. Yet again, Elkaim proved that when he finds the secret to success, it doesn't stay secret for long.

After that fateful night in high school, Elkaim was diagnosed with alopecia universalis, an incurable autoimmune disorder that causes hair loss. Faced with bewildered stares from his classmates, he felt as if he went from "hot athlete" to "alien" in a matter of weeks. 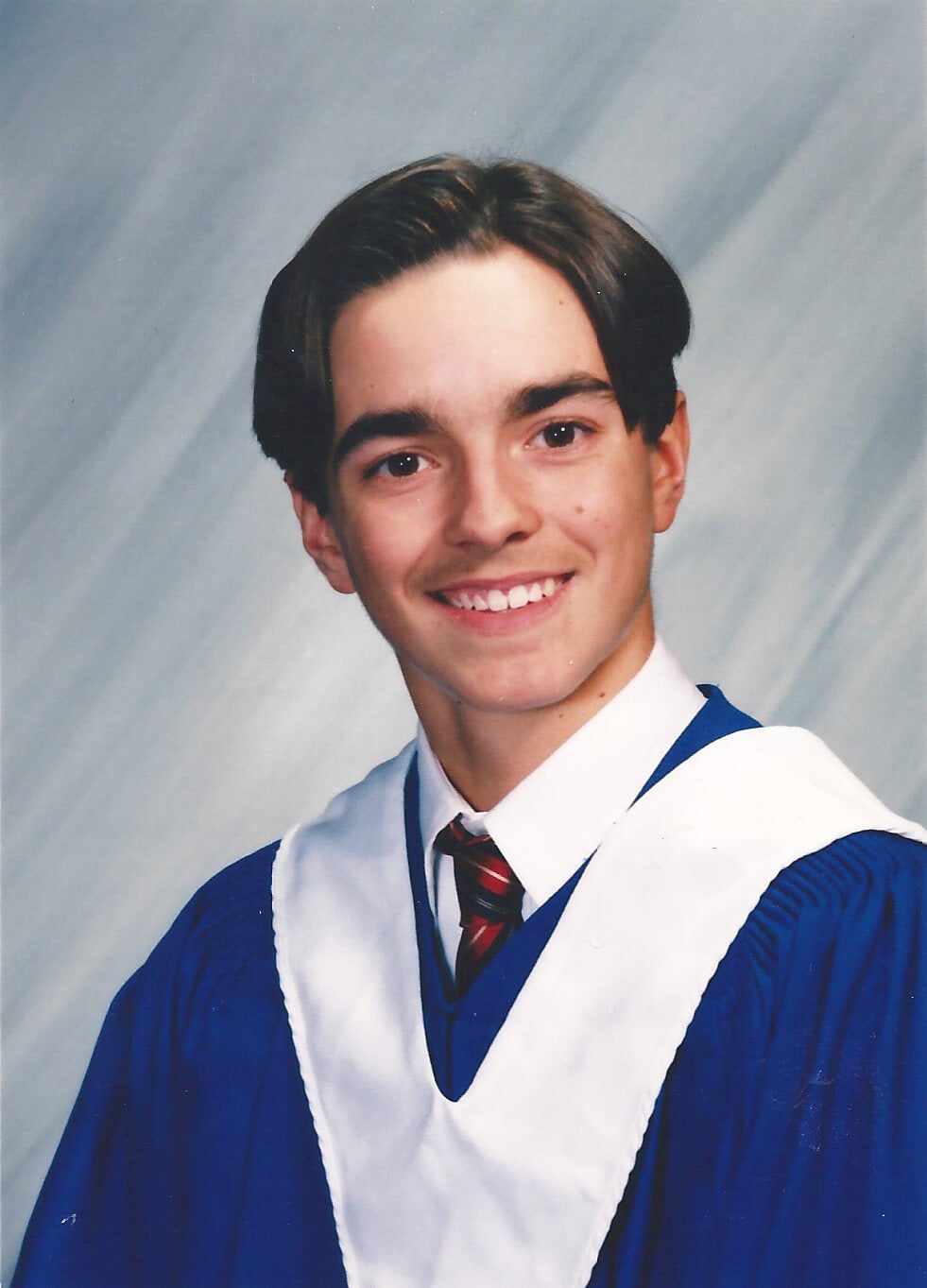 Elkaim consulted with various specialists who had no answers to the cause of his alopecia or how to treat it, so he vowed to find them on his own. He enrolled at the University of Toronto for kinesiology, which is the study of body movement and how it can promote health, but still couldn't find answers.

Despite his asthma and fatigue, he played for the school's soccer team while working as a personal trainer. Elkaim also played as an amateur on the Toronto Lynx professional team.

Some of his hair grew back, but his shaved head had become his claim to fame, so he kept it that way. Missing eyebrows and eyelashes, however, still plagued him.

When he graduated, Elkaim was snagged by the reserve team for the Lille OSC professional soccer club in France. Playing professionally was his childhood dream, but living his dream wasn't as glamorous as he had imagined.

"I was on a stipend of about $80 a week, which I kept in a cup on my kitchen table. There would only be a few coins left at the end of the week," he recalls. Although he loved the sport, he didn't like the politics involved or the inability to decide where he would play. His inner entrepreneur craved freedom and control over his future. After one season on his probationary contract, Elkaim decided to return to Toronto and began to work as a personal trainer again.

He earned around $20 an hour working long days at the gym followed by volunteering as a soccer coach at his alma mater. "I felt like a slave to my job, trading time for money and struggling to make ends meet," says Elkaim. "I wanted something bigger and freedom to live on my terms."

Exhausted and underpaid, the 25-year-old knew this wasn't the life he wanted. So when his then-girlfriend, Amy Coates, decided to visit an open house at a holistic nutrition school, Elkaim tagged along. What he learned would change his life.

From nearly broke to the peak of his industry.

At the open house, Elkaim realized that his health issues could be linked to his diet. "Growing up, I mostly ate processed and fast food. I might've been fit, but I wasn't healthy."

Elkaim enrolled on the spot and adopted a much cleaner diet for several months, flooding his body with vegetables. Soon, his asthma and skin problems vanished and his energy increased. Within two months, most of his hair had returned, including his eyebrows and eyelashes.

"When I learned to eat properly, I remember thinking, "No wonder I lost my hair,'" says Elkaim. "In four years at a top university, I never learned this information. I realized others must also be in the dark."

He created his own approach to eating and exercise by combining his diet with his athletic and fitness expertise. In 2006, while he continued working as a trainer, he began building an online health business to reach more people with his message.

Elkaim struggled with frustration and overwhelm as he slowly mastered online marketing. For three years, the earnings from his health business were below the poverty line. In 2009, he was able to quit personal training and support himself with the business, but he still wasn't where he wanted to be.

Elkaim decided to attend several live events where he could learn from others, such as Yanik Silver's Underground Online Marketing Seminar and Ryan Lee's Continuity Summit. "I didn't have the money, so I bought the tickets on credit cards. That was the best decision I ever made."

Those events led Elkaim to find the mentors who would help him achieve success. Today his health and lifestyle site, YuriElkaim.com, generates multiple seven figures while helping thousands. He has appeared on national TV shows like "The Doctors" and "The Dr. Oz Show," and his YouTube videos have been seen by millions.

"I spent years trying to do it on my own," says Elkaim. "I was working hard, but I wasn't working on what matters: mindset, marketing the right way, monetization, and self-managing systems."

Things were looking up. But they took an unexpected turn in 2012 — when he lost his eyebrows and eyelashes again.

A man with a makeup routine.

Elkaim had recently received a routine tetanus shot, which was the only explanation he could think of for the hair loss. Still, "I felt like a fraud," he says. "Was there no truth to what I was teaching? So I did what any grown man would do: I started using makeup."

He continued sharing YouTube content, though viewers occasionally commented on his funny-looking eyebrows, which he was filling in with brow liner every day. "I was crippled by fear that I would be found out," says Elkaim. "It was exhausting." This continued for almost two years.

Just as live events had changed his professional life, another changed his personal life. In 2013, Elkaim attended Mindvalley A-Fest, a personal and business development event that took place in the Dominican Republic that year. One of the exercises involved giving away something meaningful. "I knew I needed to get rid of the makeup," says Elkaim. "I couldn't keep hiding behind a mask anymore."

The next morning, he threw the brow liner in the trash. When he shared his first YouTube video without it, he was flooded with support.

Elkaim's business continued to grow. As an act of visualization, he added the cover of his book "The All-Day Energy Diet" onto a mock-up of the New York Times bestseller list and looked at the image daily. Nine months later, the book reached the No. 2 spot on the list.

Other health professionals were asking for business advice, and he realized he had an opportunity to help a lot of people. He began doing workshops in 2014, and Healthpreneur was born.

Elkaim shared the marketing techniques he used to build his health business. But after about a year, he realized this wasn't impacting his clients fast enough; after all, it took nearly a decade to build his brand.

Meanwhile, Healthpreneur had grown from zero to a million dollars. Elkaim compared what he was doing and what he was teaching. He had narrowed his focus to four steps: attracting leads with Facebook ads, driving them to informational webinars and an online application, and inviting the right people to have a phone conversation about potentially working together.

When Elkaim began teaching his clients this "Perfect Client Pipeline," many went from selling $100 ebooks to five-figure coaching. He has an uncommon message: "First, build your income, then your influence. Most do that in the wrong order, which is why they struggle in business. 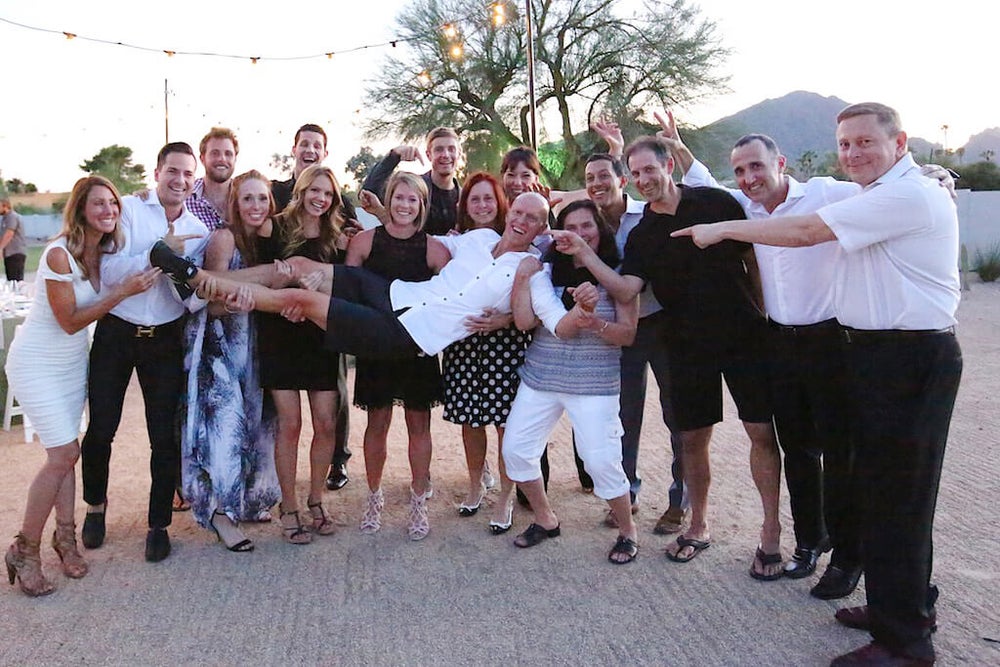 Elkaim helps health professionals clarify and streamline their marketing, create results for their clients, and charge what they're really worth, which he says is easier when you're selling results instead of yourself.

Today, Elkaim and his team coach a group of almost 300 clients through his Health Business Accelerator program. He says one-on-one coaching is "outdated," and that groups benefit both the mentor and mentees.

Once they've built the foundation, those ready to exceed seven figures and make a bigger impact can join his Luminaries Mastermind, with around 25 members, or attend his annual event, Healthpreneur Live, where he caps attendance at 250 people to keep the community intimate.

Healthpreneur's mission is lofty: to help 1,000 entrepreneurs 10x their businesses so they can collectively impact more than 1 billion people — while living on their terms. 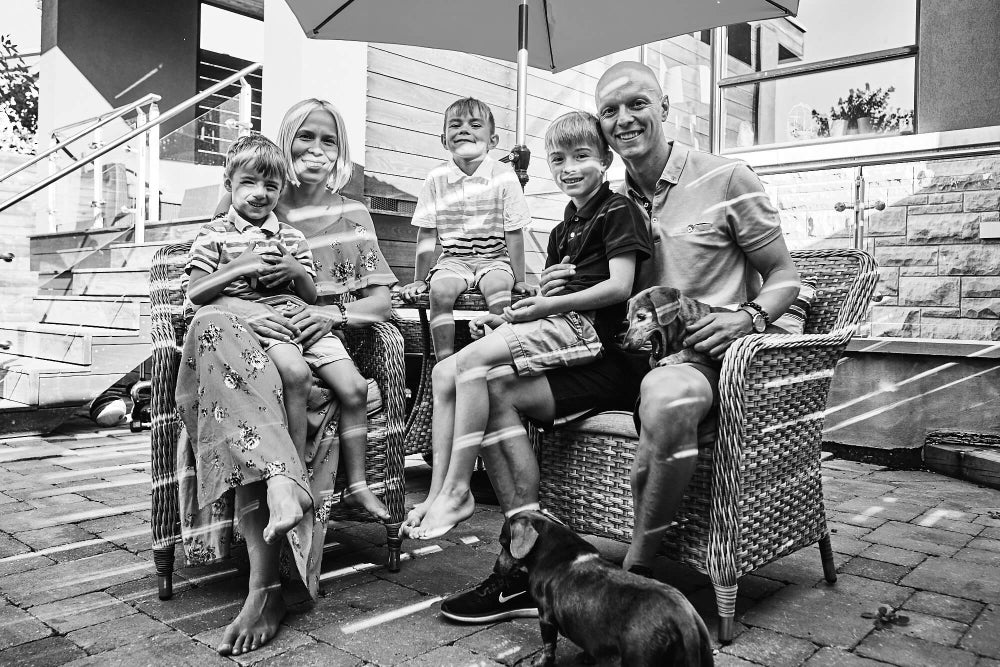 Elkaim with his family of five, which became six in June 2019.
Image credit: Yuri Elkaim

Elkaim works between 9 a.m. and 3 p.m., when he picks up his three sons from school. He and Coates, now his wife, have been together for nearly 15 years and recently welcomed their fourth child. They leave Toronto often and have taken the boys everywhere from Mexico to Morocco.

Elkaim's next goal is also ambitious: living to 144 years old. He may not have hair, but he just might have the health and energy to do it.