Here's what scheduling each five-minute chunk of my day and skipping breakfast taught me.

What happens when you try to run your day like Elon Musk, but you're neither a CEO (sorry, Mom) or a billionaire? I decided to find out by breaking up my schedule on Tuesday, April 17, into five-minute time slots à la the CEO of Tesla and SpaceX. I double-majored in theater in college, so I was planning to take on this challenge through some method acting -- but since Musk has been sleeping on the Tesla factory floor and skipping showers as of late, I decided to spare my co-workers.

Musk reportedly sleeps about six hours per night, wakes up around 7 a.m. and usually skips breakfast. We share the same wake-up time, but due to my inability to turn off reality show satire UnREAL the night before, I hit snooze for an extra half-hour. Skipping breakfast wasn't as difficult, but I couldn't stop thinking about the pesto pasta I'd brought for lunch. And like Musk, I didn't take any phone calls all day to maximize productivity.

Perhaps the single biggest hallmark of Musk's routine? His oft-reported five-minute schedule blocking system. At work, I got started with segmenting out my day, but I had to plan things out a few different times as new responsibilities came up. The five-minute blocks had me feeling extremely productive for small tasks that tend to last longer than they should (checking email, brainstorming article ideas, publishing a story online). But they felt pointless when I had to block out many five-minute chunks in a row for larger tasks (writing, ironing out the angle for a new article, planning for an upcoming call with a source). And whenever there was a risk of something running over and encroaching on the rest of my schedule (like our team's relatively relaxed morning news meeting), my stress level spiked. (I'm running late -- I'll have to change every single upcoming time in my Google doc! And that'll take another five minutes!) 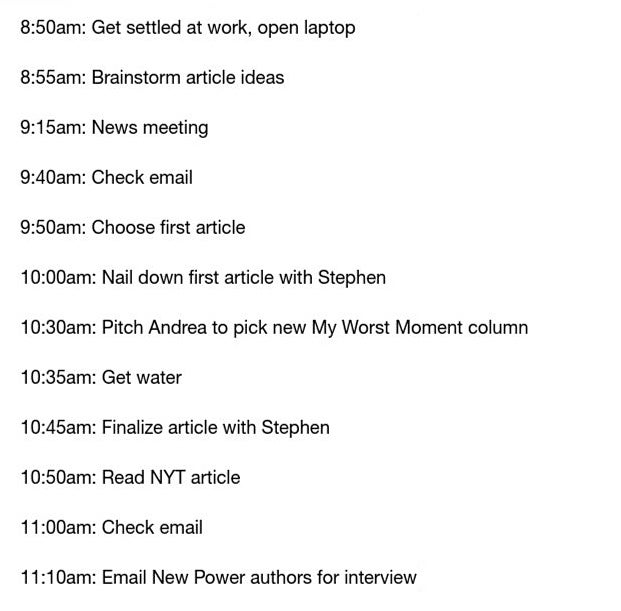 Musk's five-minute scheduling trick did teach me something new about productivity: It made me realize how often I stop whatever I'm doing to read or reply to new emails. The five-minute blocks kept me largely on track, and I got more work done faster because new messages weren't interrupting my workflow. Loosely scheduling out my day and closing my inbox when it isn't time to check email are two things I'll take away from this experience.

As for something Musk's schedule is unsurprisingly missing? Work-life balance. He reportedly wolfs down lunch -- during a meeting -- in no more than five minutes. Because of the sheer amount of aforementioned pesto pasta I brought, it took me 10. To stick to his schedule as much as possible, I only spent five minutes socializing with my co-workers -- then, with a longing look at the lunch table, I retreated to my desk for another five-minute block.

Needless to say, I wasn't a big fan of Musk's quasi-lunch break. Giving your mind a rest can be vital for mental health and focus -- in fact, research published in 2017 suggests that intentionally scheduling breaks to allow your mind to wander might lead to benefits in problem-solving and planning. Plus, who doesn't love lunch?

Speaking of work-life balance: Musk reportedly works about 85 to 100 hours per week, but until I'm worth $19.5 billion, I'll pass on that.