By Jennifer Wang
June 23, 2009
Opinions expressed by Entrepreneur contributors are their own. 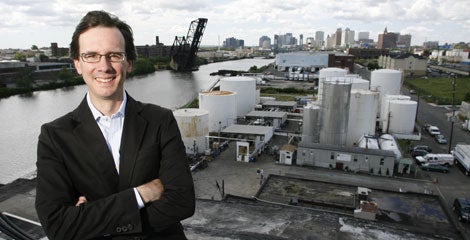 First off, tell me how the biodiesel industry--and Innovation Fuels in particular--benefits small business owners.
We're a fuel provider, so if a business runs a commercial boiler or a back-up power generation system, or has a fleet of vehicles . or is in need of marine transportation or rail, we provide fuel for all of that. And biodiesel is priced lower than petroleum-based diesel.

Do you have a lot of small business clients?
We do. Most of them are heating and oil distributors, small mom and pop shops that distribute heating oil to residences. A lot of our vendors are small business too . and we also sell them back biodiesel that they run in their trucks and delivery vehicles.

And is there a lot of opportunity in biofuels for small business?
There is for suppliers. Except for feedstock, most of the companies we deal with are local businesses, and we use them for a range of services--everything from pipe installations to accounting. So there's a domino effect as we increase the size of industry.

Can you elaborate on small business job creation?
So Innovation Fuelshas created 38 jobs in our three offices over the past two years. Most of these hires came in by end of last year. This year, we've brought in seven more.

In addition, we did an analysis of companies and jobs we support outside our industry, and I can tell you there are over 30 businesses we support. We directly support 127 jobs outside our company--we buy animal fats and chemicals, we use lab services--and even beyond that, we're helping to create 38 additional jobs with all of the construction projects we have going on.

How is that possible in this economy?
Well, we're growing significantly. From a sales perspective, we made more in the first five months of [2009] than we did all last year.

What do you attribute this growth to?
I attribute it largely to the biodiesel industry and our position near a harbor. This is where the heating oil market is, and more heating oil customers have been using biodiesel to burn their boilers and furnaces. There's also an interest in that area that's really spurred things on.

Plus, we actually formed our company in 2007 . so in 2008, we were just gaining our stride, which is why we started out the year with a very strong group of people fully functioning and producing significant quantities of biodiesel.

So if you're growing, you may actually support more as time goes on.
Yes. And the industry overall is growing, so there's a lot of potential here for small business.

What would stimulus funds do to pricing?
With stimulus funds, the price could go significantly lower than the marketplace rate. If the federal government were to match on a per-barrel basis what they provide to petroleum-based oil companies in terms of incentives and rebates, our prices would be even lower than they are now.

How much are we talking?
Right now, on a per-gallon basis, we can be five cents under, and when prices are going up, we're able to give even more of a discount.

That's pretty significant. And what do they provide petroleum-based oil companies?
Something like $2 billion to $3 billion a year in direct benefits, and then there's all these indirect benefits. And we don't get any of that. Right now, we as an industry are getting incentives of about $500 million.

Then why are there arguments against more investment into biodiesel?
Most of the arguments are assumed around the belief that there's a requirement for infrastructure improvements, that biodiesel does not fit into the current infrastructure.

And that's largely due to ethanol, where you have to make upgrades to fueling infrastructure like pipelines in order to include it. We typically get lumped into that [category], and they say it doesn't make sense . because we'll have to completely overhaul the distribution system. But that's not the case.

There's about $50 billion in the stimulus earmarked for renewables: Is that something you think would cause more biodiesel firms to crop up?
It will probably cause less. There are 176 biodiesel plants in the U.S. right now, but most of those are small and don't have operating efficiency. They can't offer a lower-cost product, even with government incentives. Most of them are shut down or way underutilized, so you definitely need economies of scale.

Could someone step in and merge these smaller firms?
It would work only if we made significant gains into our feedstock. Most of those facilities are operating using soybean oil. Those costs are high and as a result we have to pass them on to the customer.

I know that Innovation Fuels is doing research into next-generation biodiesel crops. What's the status of that?
We are developing crops like pennycress and other non-edible plants. That's ongoing and probably the most active part of our industry right now. We need to find the right crops before we can do something [revolutionary].

Are there any indications of just how big the industry could get?
It's not specific to the biofuels industry, but the Environmental Defense Fund put together a [Less Carbon, More Jobs] map of all the energy efficiency and solar companies in the U.S. It's a work-in-progress--like, we're not on there yet--but it shows how many green jobs and business opportunities are available if we continue the transition to a greener economy.