By Carol Tice
October 13, 2009
Opinions expressed by Entrepreneur contributors are their own. 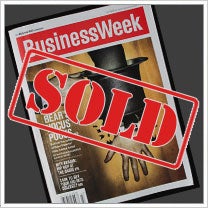 It's been bargain week in the business-selling marketplace. The poster child: shrinking BusinessWeek's sale for less than $5 million to Bloomberg on Tuesday.
Also making news: California's largest and oldest independent bookstore, Vroman's, which purchased another indie, Book Soup. In both cases, the acquisition moves likely mean the difference between survival and death for the acquired.
Still, many commentators seem more sad than relieved as they contemplate how business values in so many sectors have declined. And it is sad to think of owners putting so much money, time and sweat into their businesses only to see them bring so little in the end.
The marquee selloffs reflect the general trend, a study from the business-marketplace BizBuySell.com shows.
On the good news front, BizBuySell's Insight Report showed the number of business sales is stabilizing. At the half-year, the site tracked a 50 percent decline in closed sales compared with the same period the year before. In the third quarter, sales were down half as much, 24 percent in a year-over-year comparison.
Comparing the second quarter of this year with the third, the trend looks even better -- closed sales actually rose 7.4 percent in the third quarter when compared with the second quarter. A year ago, that comparison showed a 30 percent drop.
One possible reason business sales are increasing? The data suggests it may be because prices are lower. Median sale price for closed deals in the third quarter was $149,000, down from $189,500 at the same point last year. Median revenue was $328,704 a year.
Clearly, it's time to fight for your business's life, unless you want to see it on the sale block for a pittance. I thought Steve and Jennifer of the blog My Wife Quit Her Job did a great job recently of talking about how important this is. Their online wedding linens site had been churning out a six-figure income for several years on cruise control. But they did a review of the business anyway, just to stay vigilant.
The review turned up three new competitors that had entered the market, and might well have eaten their site's lunch in time if they hadn't analyzed the situation and taken steps to maintain their market position. Just a reminder that now of all times, it's important for business owners to stay on their toes...or they may find themselves out of a job.