George Steinbrenner's Contribution to the Business of Baseball 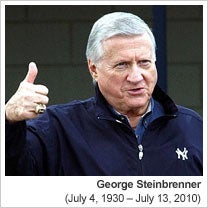 Tonight at Angels Stadium in Anaheim, Derek Jeter of the New York Yankees will take the field as the starting shortstop for the American League in the 81st annual Major League Baseball All-Star Game. Jeter's $22 million annual salary makes him one of the highest-paid players in the game, thanks in large part to his former boss, George Steinbrenner, who bought the entire team in 1973 for less than half that amount, and who died this morning at the age of 80.

To say the least, Steinbrenner was a polarizing figure, loved by some for taking an also-ran franchise and restoring it to its former glory, and hated by others for bringing pure, unadulterated capitalism to baseball. But the simple fact remains: The team he bought for $10 million in 1973 (actually 8.8 million after he sold two parking lots thrown in as part of the deal) is now worth an estimated 1.6 billion, nearly $800 million more than the second-place Boston Red Sox, a fact The Boss would no doubt have enjoyed--as long as they weren't ahead of the Yankees in the standings. You don't get that level of success without being a tireless innovator, and Steinbrenner was, quite literally, a game-changing force in baseball. But having said that, he also mixed in a healthy dose of bedrock business sense. Love him or hate him, here are just a few things to appreciate.

He spent money to make money. These days, you can't throw a baseball in any direction without it hitting someone ready to complain about how overpaid the game's players are. But just as Steinbrenner was taking over the Yankees, free agency was taking hold in baseball, and he took full advantage. In 1975, he made Catfish Hunter the highest-paid player in the history of the game with a $640,000 annual salary that was more than six times what he had been paid the previous year. After the 1980 season, he signed Dave Winfield to a 10-year, $23 million contract, which again became the highest salary ever paid to a player at the time. Yankee third baseman Alex Rodriguez now makes $10 million more than that--in one season. But in terms of percentages relative to what the owners are worth, players' salaries are still well in line with the rest of the business world--and no one goes to the ballpark to watch the owners, a fact Steinbrenner was quick to recognize as part of the cost of winning.

He had a distinct management style. Quite possibly the understatement of the century, but it's something every true entrepreneur needs, and Steinbrenner had it in spades. He was famously hands-on as an owner, changing managers 20 times in his first 23 seasons as owner, including firing manager Billy Martin five different times. He publicly called out players--especially high-priced stars--when he wasn't happy with their performance on or off the field. Then there's the Yankees' famous grooming policy, which to this day doesn't allow facial hair other than a mustache, or hair below the collar. Since Steinbrenner took ownership of the team in 1973, only three employees have been continuously employed.

He made the right deals with the right people at the right times. The ability to form profitable alliances was at the heart of Steinbrenner's innovation--and of the team's success and value. He was the first owner to sell cable TV rights, and when that relationship began to go south, he simply formed his own network. He also signed a 10-year, $97 million contract with Adidas in 1997, the first such contract at the time. Technically, Steinbrenner was just another MLB franchisee, so these sorts of deals often ruffled all the wrong feathers. But they also netted million for Steinbrenner, for the Yankees and, eventually, for all of baseball, and were quickly and widely imitated.

He never took himself too seriously. Like many entrepreneurs, Steinbrenner was as much a brand as he was a businessman, and he never shied away from that brand. It started as early as the late '70s, when he fired Martin as part of a Miller Lite beer commercial, to which Martin responded, "Not again." After he publicly scolded Jeter in the press for partying too much, the two appeared in a Visa ad together club-hopping. He even hosted Saturday Night Live in 1990, dreaming of a Yankees team where he was not only the owner, but also served as the manager and played every position.

Steinbrenner was larger than life in the world of baseball, but he was equally transcendent in the world of business. They say that if you're not pissing someone off, you're probably not very good at your job. So you can hate the Yankees if you want--plenty of baseball fans do--but The Boss deserves his due.