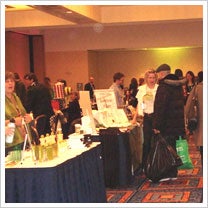 There's nothing quite like a room full of entrepreneurs to lift one's spirits. Just when stock market lows were getting me down and doubts about how helpful the Economic Stimulus Plan would actually be for entrepreneurs were sinking in, I shut off the computer and headed to the Green Product Expo in NYC. There, I reveled in the energy and optimism of entrepreneurs. Never mind that they're in the thick of things, serving as the first line of defense where they're personally battling it out with the credit crunch and nervous, price-conscious consumers.

In that room, on the fourth floor of the Marriott Marquis in Times Square, I soaked in the entrepreneurial spirit and felt protected somehow from what was happening on the other side of the door.

Don't get me wrong. I'm not saying that the economy never came up in my discussions with the entrepreneurs in attendance. Lee Archer, cofounder of New Wave Enviro Products, a manufacturer and distributor of eco-friendly products, admitted that his business has been affected by the economy when the company that was making the filters for his reusable bottles apparently went out of business and that he has had to deal on several occasions with retailers that don't pay up. Yet, despite the challenges, Lee was overall optimistic and was excited to see what types of innovative companies would emerge from this recession as has been seen in past recessions.

Other than New Wave Enviro Products, which Lee started more than a decade ago, and b. happybags, which launched six years ago and was one of the first to bring reusable bags to the market, many of the entrepreneurs were startups. Michael Dwork just launched his line of environmentally-friendly dinnerware made from fallen leaves (literally) last month but can't get the product out fast enough to meet the demand. It seems as though fortune has been with him since the beginning. In order to compete in a business plan competition, he had to create a one-page website for his company, Verterra. With zero advertising, site visitors were soon inquiring about ordering products. So is green still hot even in this economy? Michael believes that as long as the product is authentic and offers a unique value proposition, consumers will definitley be interested.

Products ranged from 100% biodegradable doggie doodie bags (created by three guys who met in law school) to reusable waste-free lunch bags (created by two friends who were both moms and who cringed at the avoidable waste occurring at schools) and the startup stories, as usual, didn't disappoint.

Maggie Mohs was cleaning houses with traditional cleaners when she started suffering from an allergic reaction. When she couldn't find a green cleaner that didn't have fragrances or dyes added in, she called upon her sister-in-law to help her develop her own line of products.They incorporated the company, Simply Neutral, in August 2007.

Pete and Cathy Delantar founded Nature's Legacy, a global manufacturer of home furnishings and garden accessories, in 1996, but, during a cleanup of agro-forest debris, they came up with the idea of turning that debris into sustainable products. In 2004, they launched NaturesCast, a manufacturer and distributor of sustainable and versatile products such as furniture, home accessories and jewelry.

As a writer for Entrepreneur magazine, I talk to a lot of entrepreneurs, but since I'm interviewing entrepreneurs across the country, I don't always get to meet them in person. To be surrounded by them, feel the energy and excitement in the air, and get a taste of the innovation and ideas, was truly invigorating and refreshing. The economy isn't the best right now--it's hard to not be reminded of that constantly--but the spirit is still alive, and the entrepreneurs that I met today are far from slowing down.