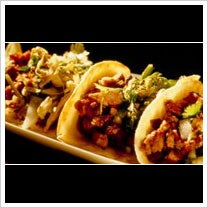 Kogi Korean BBQ, an Asian-fusion taco truck, has created a sensation in Los Angeles in part by using Twitter to beam its latest location to fervent customers.

While other well-regarded taco trucks in the L.A. area have made their names by staking claims to well-trafficked intersections, Kogi is a roaming gastronomical party--adding an element of hide-and-seek to its already unique pairing of Asian-flavored elements (Korean barbecue beef, soy sauce, cabbage) to the palette of the Mexican taco. As the Los Angeles Times reported recently, Kogi is the brainchild of Filipino Mark Manguera and his Korean-American wife, Caroline. Her sister Alice helps the pair with Twitter, broadcasting the truck's latest location.

With a serious chef, Roy Choi, on-board, the truck has caught the attention of L.A. hipsters, movers and shakers. The rolling eatery is sometimes accompanied by a DJ. And Manguera has fielded interest from celebrity intensive restaurant-and-club chain SBE.

For now, reports the Times, Kogi is sticking to the road: It recently rolled out a second truck.