The Launch: On the Scene with Big Papa's BBQ

By Laura Lorber
November 19, 2010
Opinions expressed by Entrepreneur contributors are their own. 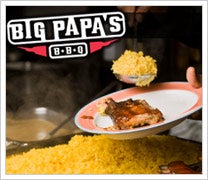 It was a chilly 38 degrees standing on the corner of Broadway and 9th in downtown Denver. A group of us huddled. Some of us had notebooks, some had cameras, some simply brought a bodacious appetite. Together we waited for the main event.

And then it happened. The sweet smell of barbeque flooded the air. Our cold noses met with the warm scent when the shiny Big Papa's BBQ smoker and support van finally rounded the corner -- with Big Papa himself pulling the smoker.

It was there, in the shadow of the Westword building an experiment began. More later on the strategy behind the location.

No, this is not a kooky experiment involving smoked meat enthusiasts. No definitely not -- I'm a vegetarian. The food still smelled good. Instead, this is the story of how the Social Sauce challenge began -- as a pop-up event in downtown Denver.

The idea behind the event is to start a grass-roots campaign to help build loyalty around Big Papa's BBQ. And, hopefully, create a swell of social media fans and enthusiasts to help bolster Big Papa's presence on social platforms. The Social Sauce team -- led by Denver-based LeeReedy/Xylem Digital -- tweeted to the staff at Westword, Denver's alternative magazine, about an hour prior to the event. The tweets offered up free barbeque around lunchtime. Passersby were welcomed, too.

The first 75 people got free barbeque. As the crowd lined up for the free lunch, the team collected basic information --first name, last name and email address -- in exchange for barbeque. A fair trade when you're hungry. Those who came for the meal were also issued coupons for 50% off on the next visit to Big Papa's.

A handful of Westword employees, as well as a wayward UPS man, made their way to the barbeque. And who do you think was among the crowd? Patricia Calhoun, editor in chief of Westword. And thus, a local story was born. Location matters, and this was not accidental.

The event served as a launch pad to see firsthand what happens when a small business executes on a simple social media campaign. The strategy for Big Papa's calls for events twice a week.

So, does Westword pick up the story? How does the experiment affect Big Papa's bottom line? Stay tuned and follow our progress on Twitter #socialsauce.