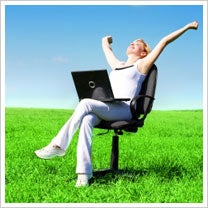 Ever doubt the power of Twitter or wonder what exactly its purpose is? Those still skeptical should take a look at Twestival, a global event that took place yesterday. Volunteers organized the events in 185 cities in a mere three weeks, tweeters tweeted about the events to get the word out and countless numbers gathered on the day of in cities across the globe--from Shanghai to Taipei to Brisbane.

And at the center of it all was charity:water, a non-profit organization that aims to bring clean, safe drinking water to people in developing nations by funding sustainable clean water solutions in areas of greatest need. The mission: to raise $1 million for a very global cause.

At Twestival NYC, the turnout was impressive. At 7:45 pm, the line was already down the block to enter M2 Ultra Lounge, a more than 10,000-square-foot club that was the chosen locale for the more than 1,000 expected Twestival attendees.

Once inside, the massive space was soon buzzing with activity. From casual to chic, from web comedians to financial consultants, people were meeting face to face--offline. Twestival NYC was full swing in motion and, just as all the other cities' events had streamed live throughout the day, so was NYC for others around the world to see.

In all, the event was an interesting mix of Big Apple glitz and glamour with the clubbing scene, the $17 cocktails, the huge charity: water backdrop that served as a red carpet photo opp, the cool DJ (Eclectic Method) and the stark reality of what was taking place outside of New York City, outside of the United States.

In the center of the club, water jugs were stacked high as a reminder of why we had all gathered and Scott Harrison (at left), the founder of charity:water transported us into developing countries with a brief talk illustrated by photos of the brown, dirty water that women and children must walk miles to get.

Every Twestival event was organized solely by volunteers. In NYC, 25 people had created this event from a blank slate. For Twestival NYC, money was gathered through ticket sales (of which 100 percent would go directly to charity:water). And Harrison estimated that NYC alone would raise approximately $18,000--enough to build three wells and change countless lives.

Twitter may be dismissed as a tedious platform centered around 140-character tweets. It may come across as a silly time-zapping exercise with no inherent purpose. But cutting-edge innovators are using tools like Twitter to realize the seemingly impossible. Sure, it's not really necessary to constantly be updating your network about what you're doing presently via Twitter. But these quick updates have actually brought communities of people together and have created a dynamic flow of online interaction.

For me, last night was proof that when that flow is directed to a bigger purpose, the outcome can be astounding. When you stop and think that Twestival was happening all across the globe on February 12, 2009, that video was being streamed live so that even those in Australia could partake in NYC's Twestival, that communities of tweeters were mobilized into action, it adds layers of meaning to what Twitter and other social networking tools can represent for entrepreneurs.

Take a moment to think about how social networking platforms like Twitter, Facebook, LinkedIn can spread the word about your business, can resonate with your consumers, can make you a part of this 21st century form of communication.