Yeah, yeah, if you blinked you missed it. By now you've probably heard that Facebook made a weak tweak to its corporate logo yesterday.

The logo's letters thinned out, the vowels grew rounder and the "a" lost its bold overhang flourish. Basically, Big Brother Blue's logo typeface got even more basic. The underwhelming refresh -- the first change to the generic wordmark since its creation in 2005 -- is so slight, you probably didn't even notice it.

Related: 5 Must-Haves for a Successful Logo

In case you're wondering, the update didn't affect Facebook's iconic favicon, its solo letter "f" logo. Hold the freakout, it will remain the same.

The subtle refinement to the full-name logo, which Facebook rolled out quietly, notably under the media radar, looks a little less hard-edged and friendlier in general. It's also more mobile-friendly, branding expert and chief creative officer of Siegel+Gate told the Wall Street Journal, which he claims is no accident. "This is actually a huge change and it's much more than the "a,'" Belk said in the Journal's report today. "It's driven by mobile." 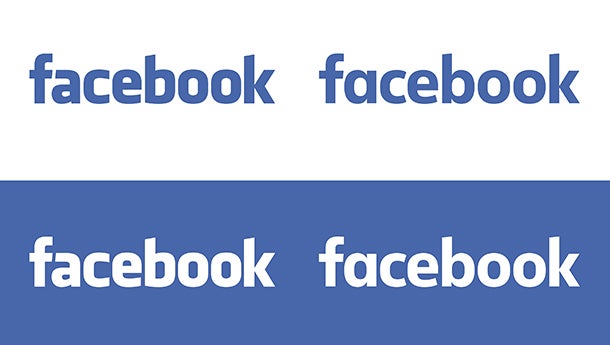 For its part, Facebook isn't saying if the goal of the mild refresh was to make the logo easier to read on smartphones and tablets. The Menlo Park, Calif.-based social media giant is drumming the friendlier overall beat.

Here's an official statement on the justification for the logo modification from Facebook's creative director Josh Higgins, as provided to Entrepreneur by Facebook this morning:

When Facebook's logo was first created in 2005, the company was just getting started and we wanted the logo to feel grown up and to be taken seriously. Now that we are established, we set out to modernize the logo to make it feel more friendly and approachable. While we explored many directions, ultimately we decided that we only needed an update, and not a full redesign. We worked with Eric Olson — whose typeface Klavika was used in the original logo — and developed a custom typeface to reflect where we are now and where we are headed.

Now that "The Facebook" is all grown up -- it certainly is at 1.44 billion monthly users per month strong -- the company is hungry for yet more users across the globe, specifically the 4.4 billion still-unconnected people in far flung corners of the world that it aims to hook on social media through its ambitious Internet.org initiative.

Related: People Are Freaking Out Over Spotify's New Logo

Facebook also told Entrepreneur that the new logo will grace its corporate signage at all of the company's offices and "anywhere that represents Facebook, Inc., or our family of apps and services, which includes Instagram, WhatsApp, Messenger, and Oculus." Better get used to the new look, people. It's about to be everywhere.

So far, reactions to the leaner logo on Twitter are mixed, though nowhere near as pointed as reactions to Spotify's recent logo color tweak. Not yet. Give "em time.

.@ChrisTauziet I didn't think somebody could strip more personality out of Facebook. Amazing feat.

@ChrisTauziet I liked how the double-storey "a" lined with the "f"... but the notable changes to "a" "b" give more balance... Overall ?

Related: How to Design the Perfect Logo (Infographic)