How a Young Fashion Designer Stands Out in a Crowded Market

From listening to customers to creating a unique product, Rebecca Minkoff shares her top tips.

By Jason Fell
May 5, 2011
Opinions expressed by Entrepreneur contributors are their own.

When Rebecca Minkoff co-founded a New York-based luxury handbags company in 2005, her goal was to develop a high-quality product that was both practical and sexy. What she didn't expect -- especially in the competitive fashion industry -- was that sales would rise so quickly.

"We came out at a time when contemporary bags were hot and exciting," says Minkoff, who is 30 and also the youngest business owner on the WPO list. "We definitely rode that momentum and learned how to build a business along the way."

Minkoff's journey into the fashion business started when, at age 18, she moved from St. Petersburg, Fla., to Manhattan and landed an internship at fashion-design house Craig Taylor. She worked closely with the CEO "who took me under her wing and taught me about the whole business," Minkoff says.

By the time she left the company in 2001, Minkoff was already working on her own designs. Her first taste of national recognition came when actress Jenna Elfman -- best known for her starring role in the TV sitcom Dharma and Greg -- wore an "I Love New York" T-shirt Minkoff designed on the Jay Leno show. After the appearance, retailers began calling and Minkoff spent the next six months "sewing T-shirts on my living-room floor."

Although Minkoff continued designing, starting a full-fledged company was daunting. So, her older brother, Uri, who had founded a small handful of health-care and technology startups, joined her, and the duo officially launched Rebecca Minkoff LLC in 2005. Minkoff serves as creative director, while Uri is CEO. The company's first prototype was a leather satchel Minkoff called the "Morning After Bag."

"I envisioned a bag that you'd want to take with you on late nights out when you weren't sure where you'd wind up or when you'd come home the next morning," she says. 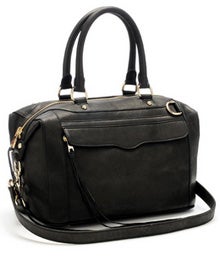 The $500 bag struck a chord with consumers -- including celebrities such as Lindsay Lohan and Hayden Panettiere. Minkoff's line has expanded beyond handbags to include accessories and women's apparel, which are sold in 300 U.S. retail stores -- such as Nordstrom, Bloomingdales and Saks Fifth Avenue. This spring, the 30-person company launched a new division called Ben Minkoff, named for Minkoff's grandfather, which manufactures and sells men's bags and accessories.

How to Break into a Crowded Industry
Minkoff's fast-track growth is particularly notable because she found success in an already crowded and fiercely competitive fashion industry. While the number of fashion-design houses has decreased 2.3 percent annually since 2005, industry revenues have been growing 0.6 percent per year, giving the remaining players an increasingly bigger piece of the market, according to IBISWorld, a market-research firm based in Los Angeles.

Here, Minkoff shares her top three tips for launching a business in a competitive industry: