Coyote Peterson of 'Brave Wilderness' says his job does not bite.

Even though his videos are some of the most viscerally impactful on the internet -- ever see a guy get stung by a Japanese Giant Hornet? -- Coyote Peterson's key to YouTube success is shockingly mundane. "Stay consistent with your content," he tells Entrepreneur. "If you're going to start, don't stop."

It's a philosophy that has worked for him. Known as "the Internet's Steve Irwin," Coyote is the top wildlife YouTube star in the world. His "Brave Wilderness" series -- in which he's been bitten by literally hundreds of animals -- has over 13 million subscribers and 2.3 billion views. And that's just the beginning.

Related: How the Creator of Epic Meal Time Continues to Find Success 8 Years After His First Video

This year alone, Coyote has written a book (King of Sting), been on the receiving end of the most painful sting in recorded history, launched a new digital series about dinosaurs in partnership with the Jurassic franchise, and announced that he will be face of an all-new Animal Planet series debuting in 2019.

Based on our conversation, the YouTube star somehow hasn't bitten off more than he can chew. Here's how he does it.

We launched our channel in Sept. of 2014 and never expected it to grow this big and this fast. It pretty much started with an episode about me catching Common Snapping Turtles, and from there it was off and running. We had 52 episodes already shot when we released the channel, so it was just about releasing content as frequently as we could, and that consistency is what drew people toward it. In addition to that, what I think makes our content so successful is my own and my team's background in filmmaking. We put a lot of thought into the content we produce -- from the music, to the cinematography, to the way we unfold the elements of the story. In a way, what we produce on YouTube are "mini-movies," and I think a lot of our viewers and brands we work with notice and appreciate it.

How did you get into filmmaking and what inspired your love for wildlife?

I have been into filmmaking since I was in high school. I was heavily influenced by filmmakers such as Steven Spielberg, and the way he always kept the audience in suspense from shot to shot using so many interesting techniques, from lighting and shot selection to music. My love for wildlife was heavily influenced by my mom, who always had me in the outdoors exploring as a kid, and certainly wildlife programs and presenters like Steve Irwin, Austin Stevens, Marty Stouffer, Jeff Corwin and Bear Grylls.

Related: YouTube Star Remi Cruz Built a Lifestyle Brand With Millions of Followers by Staying True to Herself

How much time do you spend on a video, and what does that entail?

Each episode is unique, and some take longer than others. For example, the episode titled "Wolverine Face Off" took nearly four days to shoot and two weeks to edit. Whereas an episode about a red-eyed leaf frog that we find in the rainforest of Costa Rica happens much more quickly. You stumble upon the frog, film the episode, and can have it in the can in a matter of minutes. Post on an episode like that takes around one to two days. So, it's a huge difference.

What bite or sting hurt you the most? What did it feel like?

Most painful bite was from a Gila monster, and that was an accidental bite. It felt like hot lava slowly working its way from my thumb, into my hand, slowly up my arm and eventually into my shoulder and chest. It was super scary, and there is no anti-venom; you must ride out the pain as your body absorbs the venom. My most painful sting came from the Executioner Wasp, that episode comes out late December and it was, without question, the most painful a sting has been. My arm was swollen for days, and eventually a small hole rotted in my arm from the venom at the sting site. Let's just say you wouldn't want to get swarmed by an angry nest of X-wasps. 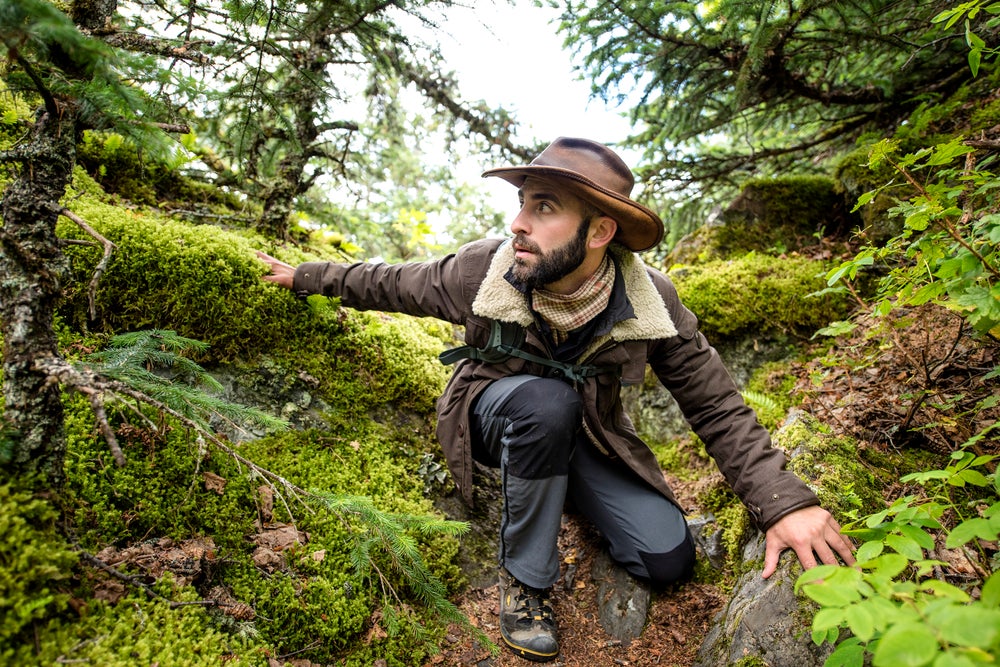 What are the other most painful stings?

It used to be the Bullet Ant, but in November we named the Japanese Giant Hornet as a more painful sting. As of December, the most painful sting in the world will be the Executioner Wasp. So the top stings in the world, as of now, and in my opinion -- because remember pain is always going to be opinion based -- are as follows, least painful to most painful: Velvet Ant aka Cow Killer, Tarantula Hawk, Warrior Wasp, Bullet Ant, Japanese Giant Hornet, Executioner Wasp. These stings rank as a "four" on the Insect Sting Pain Index, which is the highest ranking you can get. Talk about a world of pain!

Content is all based on what we get per location. We batch produce, which means that if we go to a location, we aim to get as much content as possible. Our record is 26 episodes in three weeks -- that happened last year in Australia. We release content based on what episode has gone through post production. We have a more "top secret" strategy as to what we release and when, but I can't give away those secrets!

Our channel is monetized just like all other channels, based on Google ads that are placed before the video plays and sometimes during the middle based on its length. Other than that, we occasionally do branded partnerships with partners that speak to the same sense of adventure as the Brave Wilderness brand, such as our recent series titled "Jurassic World Explorers." Over four episodes, we were able to be a digital microphone for Universal Pictures' Jurassic World franchise, creating exciting new content exploring the real-world science and paleontological aspects of the dinosaur kingdom.

Have you alwyas had an interest in dinosaurs?

I've been a fan of the Jurassic franchise since 1993 and the release of Jurassic Park. It's arguable to say that I am one of the biggest fans in the world, and certainly the biggest that has an audience like the Brave Wilderness channel. So, when the opportunity to team with Universal Pictures presented itself we were on-board 100%. We just produced the first season of "Jurassic World Explorers," a series that takes an in-depth look at the dinosaurs of the franchise and how some of them compare to modern day reptiles and birds, and where dinosaurs now exist through the world of paleontology.

One of the greatest joys of YouTube has been that it gives the creator freedom to post when it works for the creator's schedule. There are no demands. However, it's super difficult to keep up with releasing content every week, and more than once a week. So, like I said, it's a tough road, but it can be done and you must really work at it to make this into a brand.

I'm honestly not sure, ha, no one has ever asked that question. Maybe that it's an easy job, because trust me, it's anything but easy. But like I said, if you love what you do and are dedicated to your craft, even the greatest challenges become a ton of fun.

How have you seen your online pursuits evolve into the world of offline?

Our biggest project to date is a partnership with Animal Planet, which was just announced a few weeks ago. We will be producing a series for them in 2019 that will take our adventures to even more remote stretches of the planet. Our goal is to feature some of the planet's most iconic predatory animals like Great White Sharks, Polar Bears, Komodo Dragons, Anacondas, etc. I can't reveal too much about the series just yet, but as it develops into 2019, I promise things are going to get exciting!

Tell us about your new book, King of Sting. What is the "Schmidt Pain Index"?

King of Sting is about my climb up the Insect Sting Pain Index that was created by Justin Schmidt to rank the pain of insect stings. In my own way, I have evolved the index slightly by dethroning the Bullet Ant from being the most painful sting in the world and listing the Japanese Giant Hornet and the Executioner Wasp as being the two most painful, putting the once first-place Bullet Ant in third place. The index has been my map over the past three years to creating our famous sting episodes, and it has been so much fun bringing people excitement and education about insects. This content is certainly some of our most popular on the channel, Brave Wilderness, which is currently the No. 1 destination for animal enthusiasts -- with 2.3 billion views earned, and over 13 million subscribers. The book is now available anywhere books are sold.

See below for five of Coyote's favorite videos:

1. Final Sting: "The Brave Wilderness channel is debuting our most anticipated YouTube video to-date this December: the most painful sting in recorded history. Fans have been begging for me to try the sting of the 'Executioner Wasp,' rumored to have a sting so painful that it could rewrite the science behind the Schmidt Insect Pain Index, and it really does pack a punch I will never forget!"

2. Wolverine Face Off: "In this episode, I realize one of my childhood dreams: the chance to come face to face with a Wolverine. Working alongside wolverine conservationist Steve Kroschel, I become the first show host to ever enter an enclosure with an unharnessed wolverine, one of the most ferocious predators on the planet!"

3. Jurassic World Explorers: "Working with the Jurassic franchise was a dream come true! We've been able to bring our fans deep into the world of the dinosaurs, while also exploring parallels of the ancient creatures in the modern age."

4. Animal Planet: "Buiilding upon our massive digital presence, we're excited to bring the Brave Wilderness Emmy Award-winning content to a new platform in 2019: television! I will star in the new original series taking audiences on wild expeditions and rare, up-close animal experiences. The team and I, including our director Mark Vins and wildlife biologist Mario Aldecoa, call the partnership a triumph to the community we've created on YouTube -- now being able to bring Brave Wilderness to 360+ million homes worldwide and over 200 countries with the deal."

5. King of Sting: "I dreamed of writing an offline companion to the popular 'sting' videos on the Brave Wilderness YouTube channel. Reading is something I want my audience of kids and families to pursue as a way to continue learning about animals, and hopefully to inspire them to explore the outdoors together. The book features full-color stills from the show, beautiful illustrations and is packed with facts about the creatures we encounter. The King of Sting is a dream book I'm really proud of, and it's available online and anywhere books are sold."