Gamefly's Sean Spector gives us a peek inside his game-rental empire.

Video games have come a long way since Pong and Pac-Man. But with high tech comes even higher price tags, a source of pain for plenty of passionate gamers. Enter Sean Spector, who, in 2002, co-founded Gamefly, an online company that is to gamers what Netflix is to movie lovers. The company was venture-backed from the start--even on the heels of the dot-com bubble burst--and is now profitable. Spector, who now serves as Gamefly's senior vice president of business development and content, shares some of his secrets to online success. 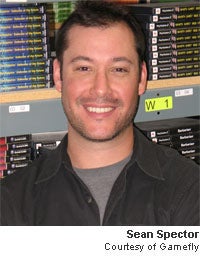 What inspired you to start Gamefly?
I had a voracious appetite for video games, and I couldn't afford to buy all the games I wanted to play. I think that's the conundrum for most gamers: They want way more than they can afford. I looked at the traditional rental model--which is the brick-and-mortar model--and realized that it was pretty good for movies, but it was broken for games. I figured there had to be a better way, and it really came down to my personal desire to play more games than I could afford to buy.

What were some of the hurdles you faced during startup?
When we started this company, it was post-bubble burst. Nobody was really looking at funding dot-coms. They had sort of gone out of fashion--especially dot-coms that held inventory. So it was definitely a contrarian play, for us as well as for the investors. It was a really good time to start a company, not that dissimilar from the way things are today. Really good companies are going to emerge from this shakeout, and I think the same thing happened back in 2002. Real business models need to be created to sustain growth and become profitable. I knew from Day One that we would have a real business model that generates real revenue, and not the reliance upon "If we build it, the profitable model will come." That's the critical thing: To have a business model from Day One is the better route to take rather than trying to say you'll figure it out a couple of years in.

How do you deal with the obvious comparisons to Netflix?
We embrace it because Netflix is a great company and they run their business extremely well. It's definitely a form of flattery because they've done an amazing job of making sure that they focus on their customers. I think all businesses can take a page out of Netflix's playbook and see how well they've done by focusing on their customers.