'So Many Lightbulbs Went Off': How This Couple's Stress-Soothing Invention Blew Up During the Pandemic

The Apollo Neuro is a new anxiety-reducing wearable backed by powerful research, and the powerhouse couple behind it has high hopes for combating the mental health crisis.

By Frances Dodds
April 6, 2021
Opinions expressed by Entrepreneur contributors are their own.

The beginning of Kathryn Fantauzzi and Dave Rabin's love story was, in many ways, a harbinger of the product they would go on to create together: The seed was planted in the real world, but it came to fruition by way of technology.

The co-founders of Apollo Neuroscience met 11 years ago on a porch at a house party in Saratoga, NY — only, Fantauzzi wasn't there for the party. She was house-hunting with her then-boyfriend, and stopping by to check out a place they'd heard about from some mutual friends. While her boyfriend was inside scouting the house, Fantauzzi waited on the porch. There, Rabin stood in the shadows, sipping a beer. They started chatting, and their chemistry was instant.

When her boyfriend came outside, Fantauzzi bid Rabin adieu, but as she walked away she caught herself thinking, "Why am I moving in with this guy when there are guys like that?" Six months later she was boyfriend-free on OkCupid, and this time, she and Rabin's ships did not pass in the night. They matched! But even after the fireworks of their first date, it took them weeks to make the connection about their past meeting. It had been so dark that evening on the porch, after all. The moment of their revelation, Rabin says, "So many lightbulbs went off."

It would be the first of many lightbulb moments for the couple, whose interests, training and strengths have curved around each other like a yin and yang of purpose-driven ambition.

A stubborn gap in the field of psychology

Dr. Rabin, 35 (MD, PhD), is a neuroscientist and board-certified psychiatrist, and Fantauzzi, 33, is a tech transfer expert — specializing in how to get science and tech discoveries out of the lab and into people's hands. As early as their first dates, they joked about starting a business together, but during the early years of their relationship they satiated their collaborative impulses by hosting monthly musical events at their home in Albany, NY, and then Pittsburgh, featuring local bands. "All of that community organizing was really where we got our first taste of working together," Fantauzzi says.

Related: Why Your Mental Health Is the Key to Your Success in Business

For many years, Rabin was drawn to a stubborn gap in the field of psychiatry: how to help the millions of people suffering from treatment-resistant anxiety, stress, depression and substance abuse, often triggered by PTSD. Particularly, Rabin was keen on developing convenient noninvasive treatments with no risk for addiction. During his residency at the University of Pittsburgh, he began researching what would eventually become the Apollo, and he and his co-researcher Dr. Greg Siegle entered a competition for funding from the university's Innovation Institute. Rabin went to a few meetings and realized there was more business talk than he could keep up with, so he went home and asked Fantauzzi to help him out. At the time, she was working at a $20 million tech commercialization accelerator with the NY State Energy Research and Development Authority.

"A novel touch therapy that signals safety to the brain"

So fast-forward to January of 2020, when the couple launched Apollo Neuroscience after five years of development and clinical trials.

The Apollo device, using Rabin's words, is "the first scientifically-validated wearable technology that actively improves energy, focus and relaxation, using a novel touch therapy that signals safety to the brain." It looks like a fitness tracking watch that can be worn on the wrist or ankle, where it sends gentle vibrations through the body, mimicking sound waves from music. The idea is to improve a user's heart rate variability (HRV), which indicates how quickly you're able to recover after a stressful experience. People who are chronically anxious or stressed often have low HRV, so their bodies and minds are never fully relaxing, or recovering — and they're more likely to develop chronic depression, insomnia, cardiovascular illnesses and other ailments. With the Apollo app on your phone, you can choose from different settings like "Energy and Wake Up," "Clear and Focused," "Social and Open," "Meditation and Mindfulness," and "Sleep."

The Apollo is the result of numerous findings during research and development. First, the team recognized that a wearable device made the most sense because it could alter a user's mindset without requiring active engagement. "A wearable device was ideal for helping people with chronic stress because they could use it to feel better anytime and anywhere," Rabin says. "Things like meditation and yoga can really help someone suffering from depression or anxiety, but when you're stressed or overwhelmed, it is physiologically harder to take those actions and change old habits." 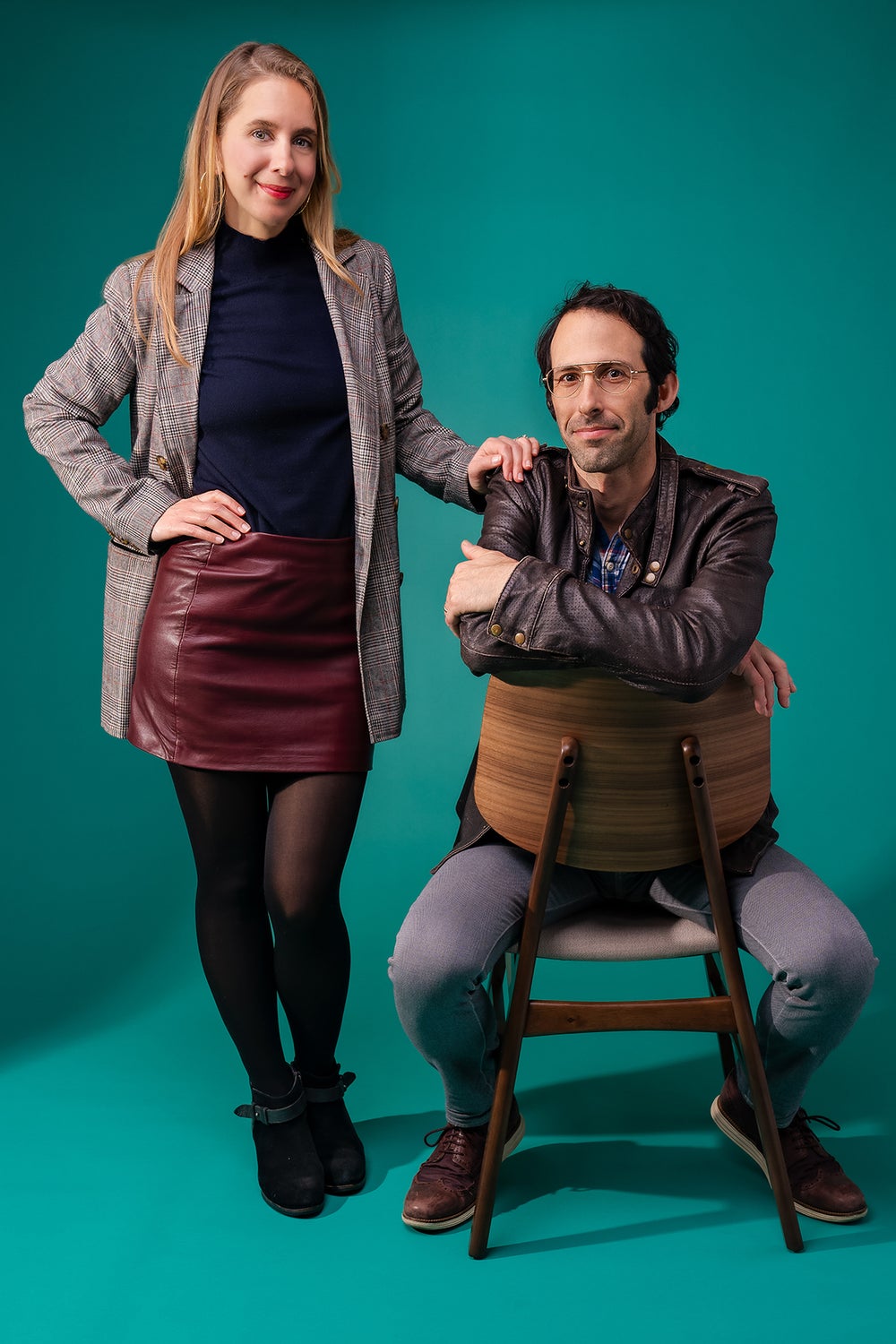 Second, they decided that vibrations based on musical sound waves were the desired stimulus (as opposed to low-grade electrical currents, which can have more adverse side effects and generally scare off consumers). They chose various sound wave vibrations for the different settings based on research around how different types of music affect the mind. "You can't overuse Apollo Neuro and it's very safe, just low frequency sound waves — like music composed for your body instead of your ears," Fantuazzi says.

Third, based on early user feedback, they decided that a wrist or ankle wearable hit the right combination of effectiveness and what people would actually use. There are now a few other products on the market that purport to do similar things to the Apollo, but they're mostly earpieces that look a little like headsets from the "80s. "People aren't going to want to wear a headset on their head all day," Fantauzzi says. "Who wants to walk around the office or the grocery store wearing a thing on your head? We designed Apollo Neuro to be worn on the wrist or the ankle to make it easy and effortless to use during the day and when you sleep."

Does this thing work?

Of course, after all of this, the most important question was: Did this thing work? In clinical trials, the answer was resoundingly "yes." In the first double blind clinical trial, the results showed a 25% improvement in cognitive performance among those using the Apollo, and improved their HRV two to three times their average rates within three minutes. A second study on a group of children suffering from ADHD, autism and anxiety, kids wearing the Apollo engaged more during their therapy sessions, and, afterward, their anxiety scores were cut in half. In a two-week study at a long-term skilled nursing facility, nurses who wore the Apollo saw a 40% reduction in stress. And in hundreds of case studies and in an ongoing University of Pittsburgh clinical trial in subjects with PTSD, over 90% of subjects reported reduced feelings of hypervigilance and a boost in calm, mood, and attention within 2 weeks of using Apollo that continued to improve over time.

Fantauzzi and Rabin always understood that a product like this could help a lot of suffering people, but when they launched Apollo Neuroscience in early 2020, they couldn't have fathomed the tidal wave of interest the pandemic would bring for such a product. People were stressed out, stuck in their houses and trying desperately not to self-destruct. After launching, the Apollo sold out in the first two weeks, and — while the team faced huge challenges in responding to the demand — "in the end, we blew our sales goals out of the water," Fantauzzi says. The team has tripled from less than 10 people to nearly 30.

"Humans are not designed for the way we live"

At the heart of its mission, the Apollo is working within a paradox: While mental health has always been a problem that received too little attention, it's undeniable that the situation is spiralling out of control. "Humans are really good adapters but we're not designed for the way we live," Fantauzzi says. "In the last 20 years we've experienced an unprecedented rate of change in our daily lives. Of course people are stressed out, distracted and overwhelmed." While there are many factors to blame, one aspect of modern life is key in the mental health crisis: technology. So, in large part, the Apollo is a piece of technology meant to help your mind and body recover from the pace of life in a technology-driven world.

This is not lost on Fantauzzi and Rabin. But as we feel around in the dark for solutions to balance societal expectations, dire circumstances and our mental wellbeing, the couple hopes the Apollo can act as a kind of softening buffer between the jarring, accelerated transitions of everyday life.

"On top of life's responsibilities, now there's an added pressure of modern society to be constantly connected to technology," Rabin says. "As a result, it is harder than ever to take time for ourselves to recover in between activities, responsibilities, and emotional stress. When we're this overwhelmed and overstimulated, even simple changes like waking up, falling asleep, and getting jazzed up enough to function at work can be difficult. Apollo Neuro reminds our bodies that we're safe by activating our parasympathetic nervous through silent vibrations so that our minds can be clear, focused, and present in the face of adversity."

Related: It's Time for Startup Culture to Talk About Mental Health

Amazon Must 'Cease And Desist' With Its Retaliation Against Unionization Efforts, Judge Says