By Jason Fell
July 3, 2012
Opinions expressed by Entrepreneur contributors are their own. 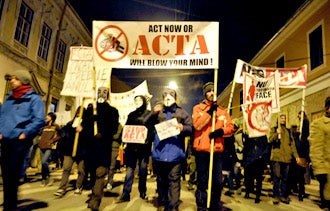 A new effort to ward off federal internet antipiracy laws is gaining traction among technology entrepreneurs and organizations around the world.

Alexis Ohanian, co-founder of social news site reddit, and Josh Levy, a campaign manager at internet and media-advocacy site Free Press, have helped create the "Declaration of Internet Freedom," a movement against proposed legislation that threaten free sharing of information online. Examples of bills that are on the group's radar include the Stop Online Piracy Act (SOPA), the PROTECT IP Act (PIPA), the Anti-Counterfeiting Trade Agreement (ACTA) and the Cyber Intelligence Sharing and Protection Act (CISPA).

Since it launched yesterday, more than 100 people and organizations have signed the declaration. Among them are internet pioneer Vint Cerf and Cheezburger Inc. founder Ben Huh.

The Declaration of Internet Freedom is hinged on five main principles:

SOPA and PIPA, which aimed to punish "rogue" websites that publish or sell pirated content, were effectively sidelined in Congress this year after several online and in-person protests. The groups behind both bills pledged to continue their efforts to find a solution that has wider approval.

Similar proposals have also attracted the wrath of internet advocates. ACTA is a multination agreement that aims to force internet-service providers worldwide to act as "internet police." CISPA, meanwhile, is a proposed law in the U.S. that would call for the sharing of certain online information between tech companies and the U.S. government.

"These battles remind us how fragile the free and open Internet is -- and make it clear that if we don't fight to protect it, no one will," Levy wrote in a blog post.

Will you support the Declaration of Internet Freedom? Tell us why or why not in the comments below.