This Mighty Exoskeleton Can Give You Superhuman Strength (Sort Of)

Ever lift something heavy at work and throw out your back? You're far from alone. The Bureau of Labor Statistics says more than one million American workers injure their backs on the clock every year -- usually when schlepping something they shouldn't hoist on their own.

The solution so far? Nada. Contrary to popular belief, not even back braces and back belts -- the kind you see on Home Depot and construction workers all the time -- can safely help us carry the load.

Related: Say Hello to the Robotic Personal Assistant of Your Dreams

Now, enter the FORTIS exoskeleton, Lockheed Martin's answer to this age-old and serious problem. It's an anthropomorphic, ergonomically-correct shoulders-to-toe body fortification apparatus. Translation: It's a jointed exosuit that gives people who wear it the superhuman ability to lift all kinds of hefty tools, parts and other payloads like they're light as a feather.

So, if a tool (or other object) is too heavy, the idea is that you can hold and use said tool for long periods of time without suffering the usual sore back, legs, etc.

And there's no mind-scrambling rocket science to how it all works, either. To boost a wearer's strength and endurance, the FORTIS simply transfers the weight of heavy loads -- weighing up to 36 pounds -- from the wearer's body, through the exoskeleton and directly into the ground. To grip and lift weighty objects, it uses a gravity-defying (and freaky-looking) mechanical claw called the Equipois zeroG arm. And that's it.

Oh, and if you're rolling your eyes thinking, "Pssssh, 36 pounds isn't that heavy," then imagine lifting a 15-foot canoe, a three-year-old kid or five gallons of water with basically zero effort and without feeling it at all, tough guy. That's pretty much exactly what you could do with a flexible FORTIS strapped to your body.

To see the FORTIS in action, check out the video below:

Sure, you could carry all kinds of cool things with it, but the FORTIS is specifically designed to make industrial overhead work lighter, easier and less dangerous. And, because Lockheed is a defense contractor, the first lucky muscles to try it out are members of the armed forces, specifically sailors. The U.S. Navy is testing two of the exosuits.

Lockheed says its strong suit reduces a wearer's muscle fatigue by 300 percent. It also increases a wearer's work rate between two and 27 times. Together, those bennies allow workers to do something they might not want to do: work longer. Though not necessarily harder, at least not physically.

Related: This Guy Is Like a Real-Life Bionic Man

If this thing becomes widely available at some point, it could have applications in a number of industries -- basically anything that deals with inventory. 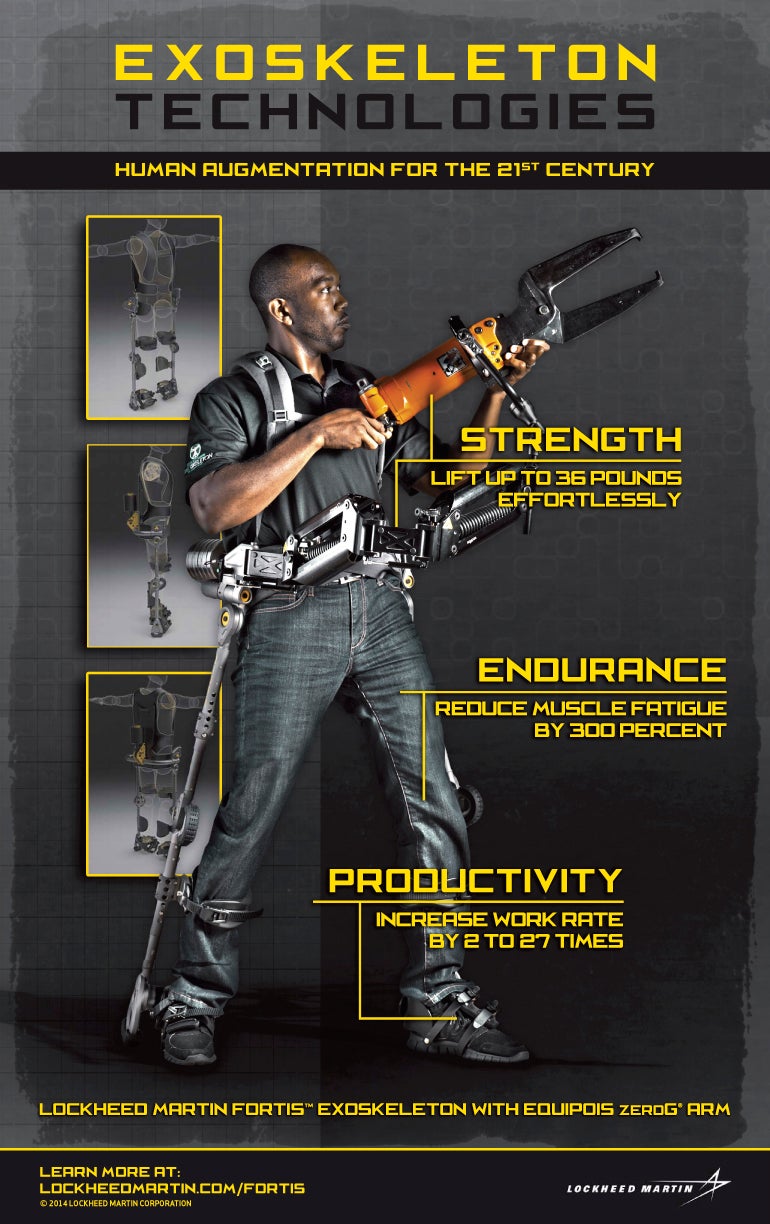 This isn't Lockheed's first stab at a working exoskeleton. In 2011, the company revealed an exosuit that is much stronger than its current offering. Appropriately called HULC, Lockheed's first robotic exoskeleton was built for soldiers on the battlefield. The hulking, hydraulics-propelled HULC is battery-powered and lets users to lug loads of up to 200 pounds for up to 12 miles in a single charge. Now that's a strong suit we'd like to have in our hand, er, on our bones.

Related: The U.S. Military Wants to Inject People's Brains With Painkilling Nanobots That Could Replace Medicine