On Saturday, a full page ad comprising a single tweet appeared in the New York Times to promote Inside Llewyn Davis ahead of this Sunday's Golden Globes.

While critical blurbs have long been used in promotional materials to considerable impact, the incorporation of a tweet into a movie ad raises new issues of ownership and calls into question the legalities of appropriation. 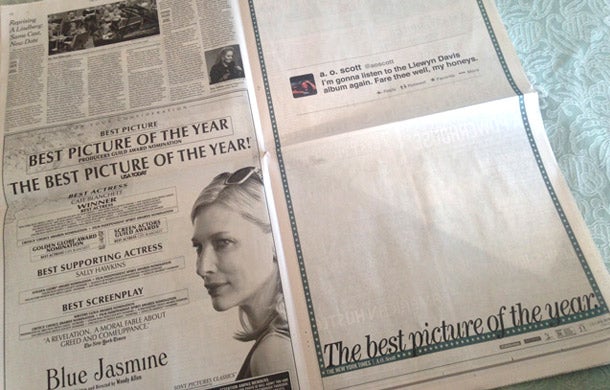 According to Twitter guidelines, "explicit permission of the original content creator" must be received for use in ads, and "the full text of the tweet" must be incorporated--both of which tenants seem to have been neglected in this instance.

When asked on Twitter if he had ceded permission to CBS Films--the studio behind Davis--Scott replied, "kind of." And the tweet had in fact been altered to omit the mention of two of the film's competitors. Initially, it read:

You all keep fighting about Wolf of Wall St. and Am Hustle. I'm gonna listen to the Llewyn Davis album again. Fare thee well, my honeys.

Scott himself seemed mystified that something he'd written in passing would be reclaimed as a full-blown ad. "I'm sorry," one of his followers joked, "but I see all of your tweets now in hard copy in the middle of a sea of white space."

While CBS Films declined to comment, the New York Times stated, "Generally we accept movie ads that include quotes from our critics from reliable sources."

Twitter does not comment on individual violations, and so the question remains about what the social networking service can--and should--do to enforce its terms of use.

Related: Fake Twitter Followers: How Many Do You Have?