Michon Ellis, CEO of Chicago's integrative marketing agency LimeGreen, had a morning meeting with some important clients. But instead of making dinner reservations at a Michelin-starred restaurant like Alinea, he planned to meet them for a power breakfast at the East Bank Club where Mayor Rahm Emanuel, Jennifer Hudson, former Chicago Bear Otis Wilson and Oprah Winfrey reportedly work out over multitasking breakfast sessions. Ellis is one of many busy CEOs who prefer the power breakfast, a short concise breakfast meeting in a setting that is often frequented by high-profile professionals, usually cheaper than dinner and lunch, and always good for brainstorming. "The power breakfast is the most effective meal because attendees bring a fresh perspective to the table," says Ellis whose clients include McDonalds, Wrigley, Dell, and Toyota. "By lunchtime, you have the work day on your mind so it's difficult to focus. At dinner, you're worn out from the day. For breakfast, both parties are fresh, energized and willing to make a deal."

Fred Yassini, general manager of the East Bank Club Grill estimates that breakfast meetings have jumped 30 percent in just the last year, with some ordering full breakfasts and others talking over smoothies and a coffee. "We've seen more morning meetings here in the Grill over the past year than ever before"

Though Mad Men's martini-soaked power lunches and glitzy dinners might recall a bit of midcentury glam, they leave a distinct 21st century hangover. But today's power meal breakfasts are often served in hotel restaurants to give time-short and airport-tethered visitors the advantage. Daymond John, CEO & Founder of FUBU is a fan and frequents Loews Regency Hotel himself. "I prefer the early power breakfast to the three martini lunch, a ritual not always conducive to decision-making. Breakfast meetings are concise, direct and put people at ease while also having the ability to fuel creativity," he says from his New York City office. "The ideas discussed are taken directly to the office and often executed immediately, as they are the first thing on your mind."

Well, that and maybe where to go for lunch. 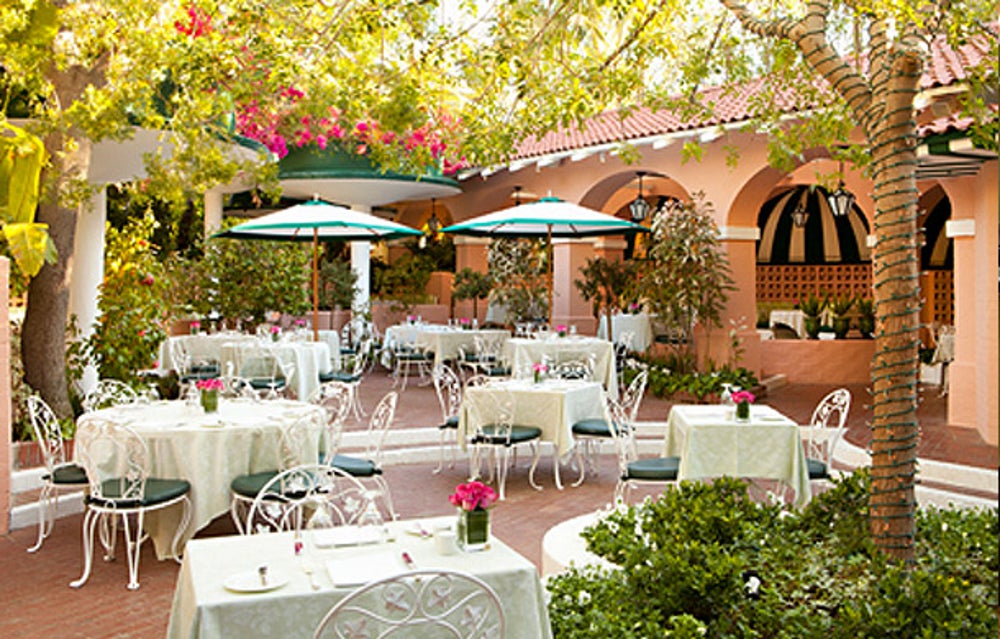 Agents, producers, actors and directors from all corners of the Los Angeles basin out-health one another over kale and mushroom egg white omelets, fresh carrot juices, and blueberry yogurt smoothies at this elegant and legendary Pink Palace where power breakfasts have increased 15 percent just in this past year. 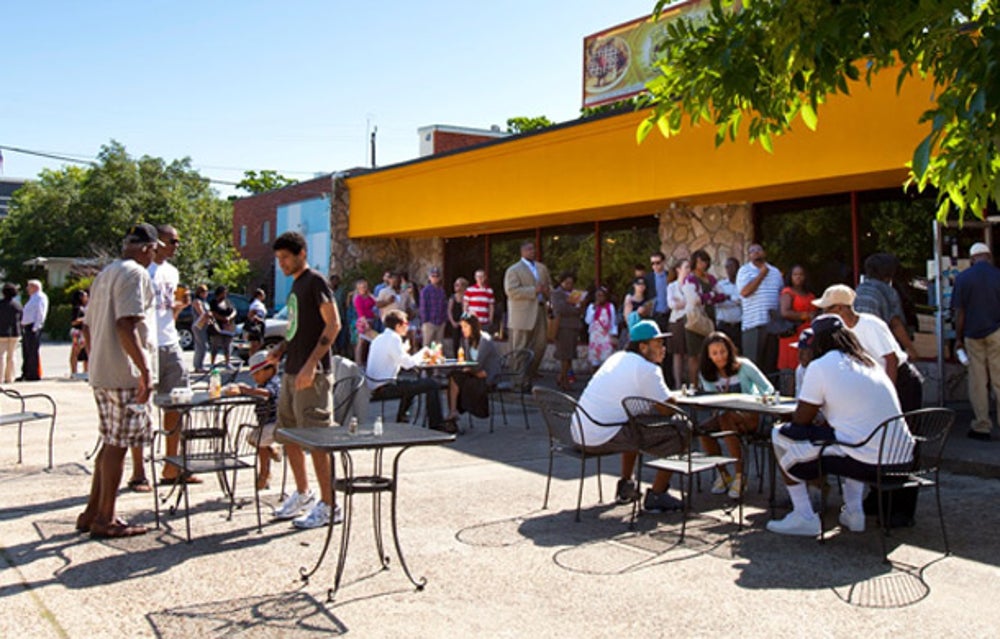 Not all power breakfasts are health-oriented. Thanks to its convenient midtown location between downtown and the Texas Medical Center, Houston's go-to power breakfast spot offers politicians, oil executives, bankers, CEOs, doctors and lawyers the chance to indulge in katfish & grits, or wings & waffles. "We've seen an uptick in the 7 A.M-9 A.M. weekday breakfast business in the past two years. A lot of people come to meet people they've never met before — a lot are out of towners meeting local business people," says owner Marcus Davis. 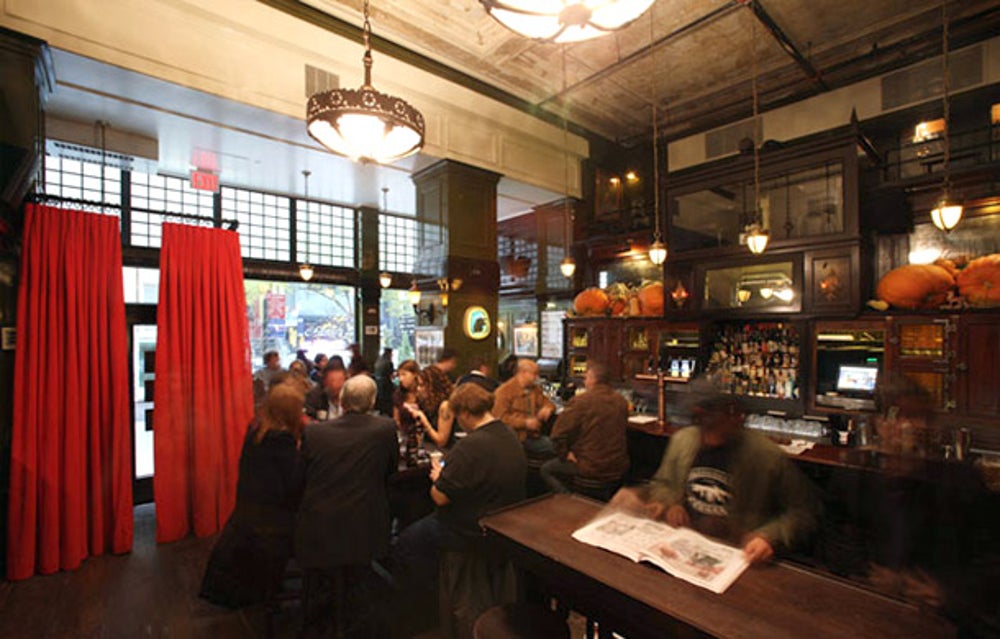 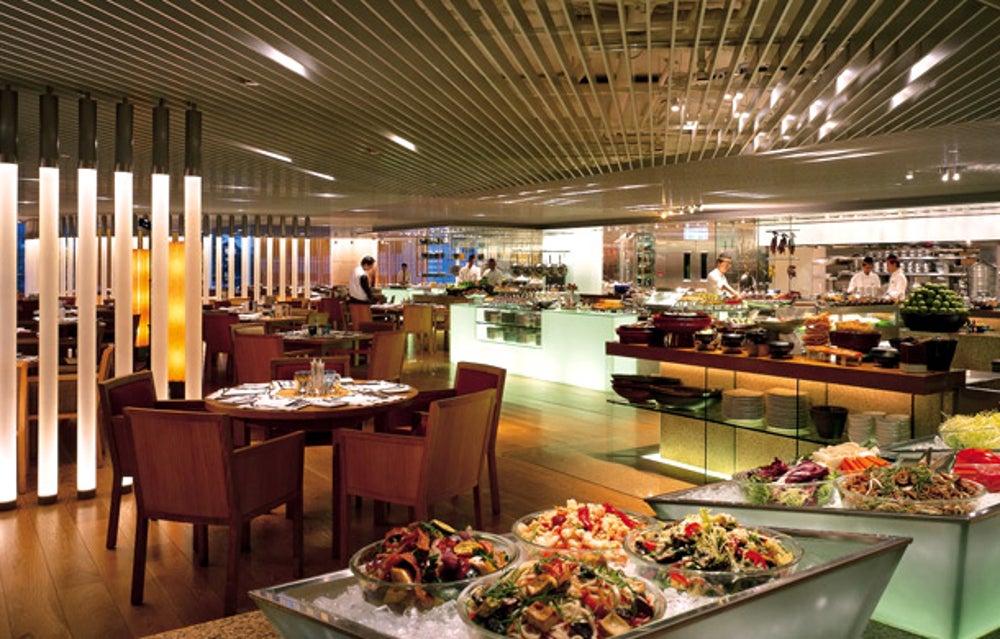 Asian hotels are legendary for their worldly breakfast buffets, but none more so than this bustling hotel buffet plating up everything from fish-flecked congee and lotus paste buns to dense dinklberger bread, flaky croissants and Eggs Benedict, ideal for multinational business meetings. Buffet-wary CEOs can ascend to gilded 57th-floor Petrus, where Victoria Harbor views and eggs (soft scrambled with mascarpone or shirred with truffled goose liver) add an empirical flavor to your morning. 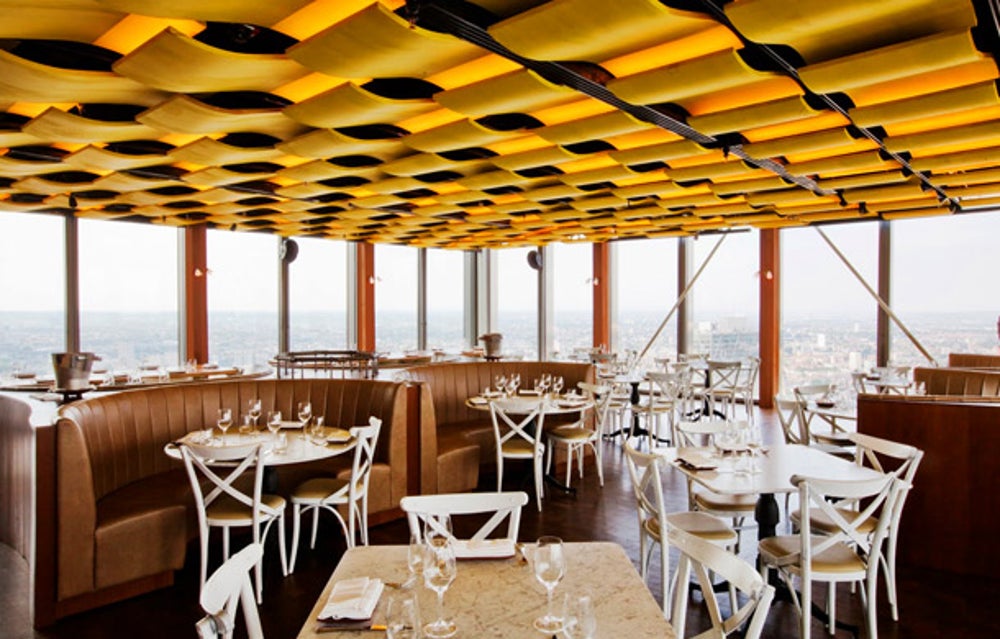 It's a mixed crowd here, with everyone from the city elite to young entrepreneurs and the fashion crowd. Early birds come to impress their out-of-town clients with a view of London's Shard and Gherkin spiked skyline should beeline to the Heron Tower's 40th Floor. The artisan 'Full English' includes Scottish black pudding and trotter-braised beans while the signature Duck 'n' Waffle dish features a crispy leg confit and fried duck egg with a drizzle of tangy mustard maple syrup. 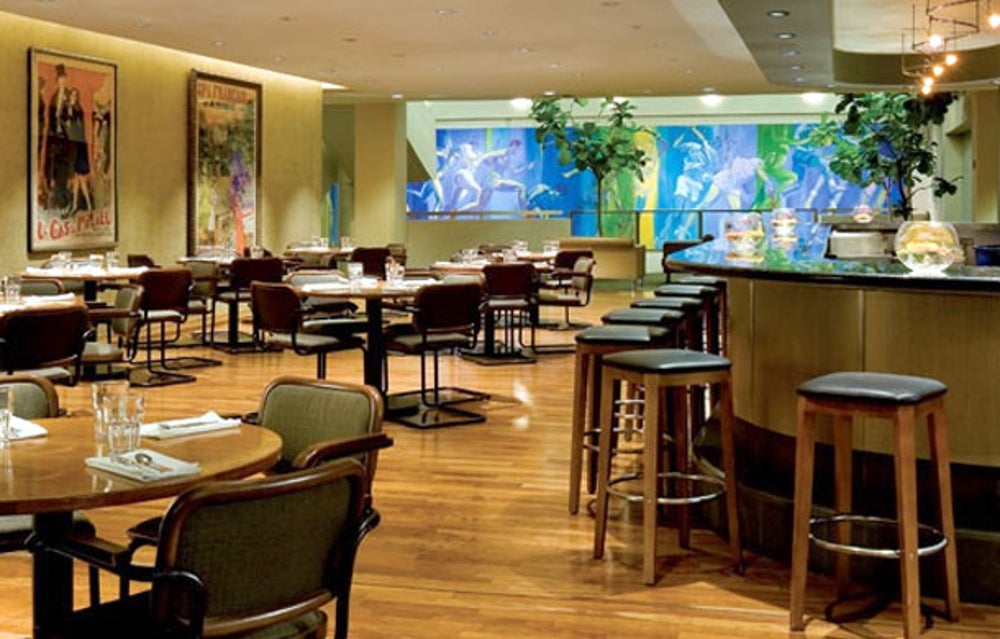 Frequented by Oprah and Jennifer Hudson, this Chi-Town's fitness club features a juice bar serving up combos like the Energizer (Carrots, Apples, Beets and Celery) and smoothies like the Chicago Storm (Mango Sorbet, Banana, Coconut, Pineapple Juice, Orange Juice, Fat-Free Vanilla Yogurt). If your morning Pilates or butterfly stroke laps leave you in need of more protein, hit the Grill for a heftier vegetable breakfast burrito or plate of sweet potato and chicken hash. 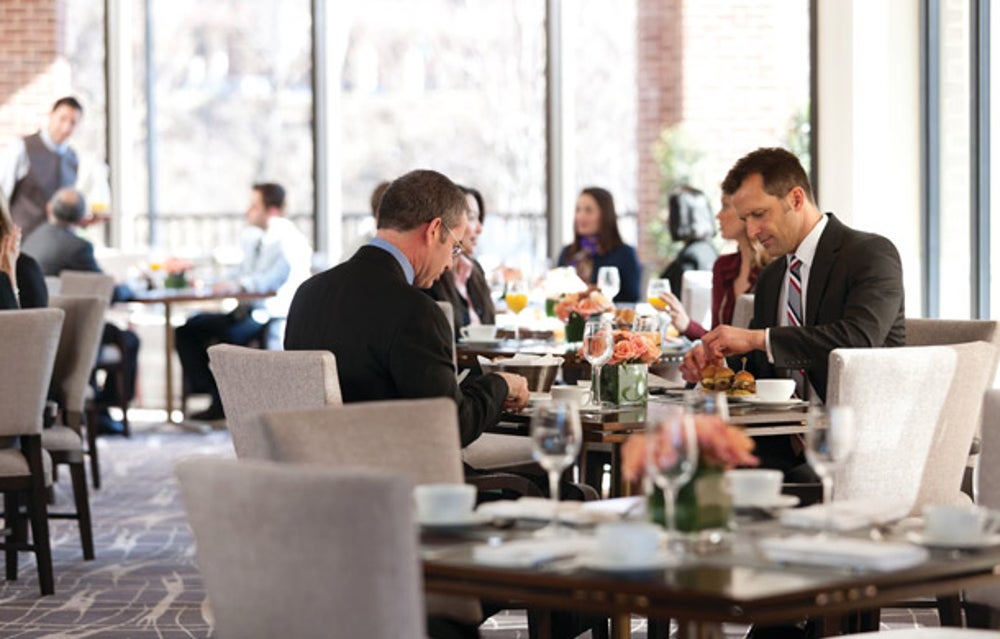 An array of international newspapers greets the morning politicos at this Georgetown go-to overlooking Rock Creek Park. Here, Jay Z and Beyoncé go unnoticed while senators, lobbyists and policy shifters like Hillary Clinton (who purportedly has a favorite corner table) get all the attention. Signature dishes include the Virginia ham, Gruyère, and egg on toasted brioche, Chesapeake crab and Boursin stuffed egg-white omelets and organic oatmeal with local apple butter. 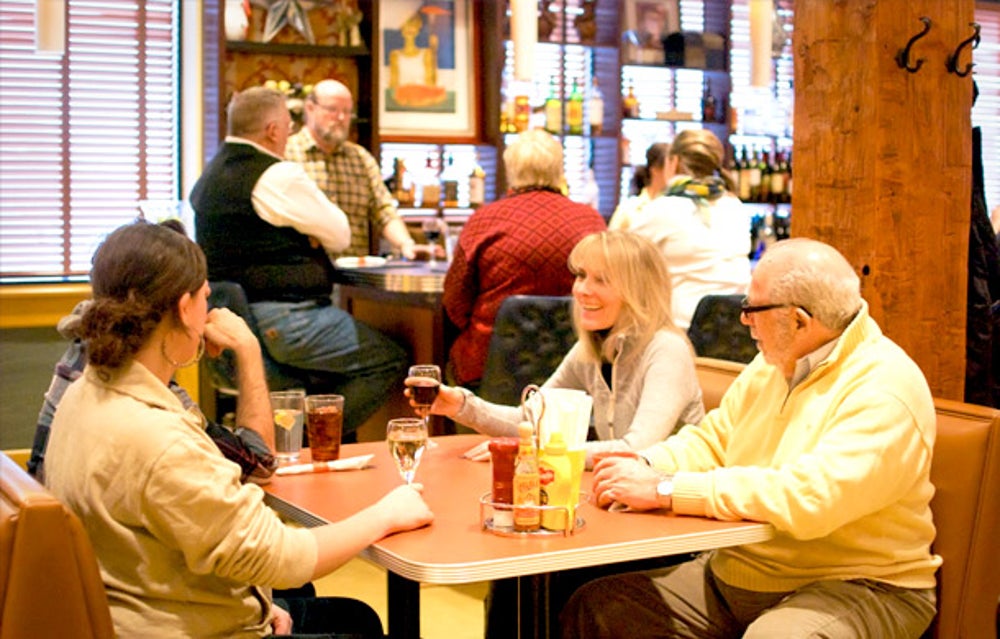 The Twin Cities suburb is home to companies like General Mills and Allianz while 17 other Fortune 500 Companies are nearby. "I hit up Good Day Cafe due to its convenient location; it's a great place to see and be seen by current and potential clients," says Alexis Walsko of Lola PR, a 17-year old PR agency. The easygoing eatery is frequented by former Chicago Bulls player and All 4 Kids founder Trent Tucker and Rich Kupchella, CEO of Bring Me The News who come for the famed quiche spiked with roasted tomatoes, caramelized onions, fontina and basil, Kobe corned-beef hash, and apple soufflé pancakes. For lighter fare, try a Dreamsicle smoothie, made with mandarin oranges and vanilla yogurt.