5 Amazing Inventions That Are Helping the Visually Impaired

In articles about leadership, we often talk about the importance of having vision. You need an idea of where you want your company to go and how you’ll get there. You need to know the trends in your industry before they happen in order to stay on the cutting edge.

The innovations below prove that, and then some. They’re designed to help some of the 6 million Americans who have a visual disability, making it easier for them to go about their daily lives.

From shoes that tell you which direction to turn to an app that makes your iPad Braille-friendly, here are five of the coolest innovations that are helping the blind and visually impaired.

1. Shoes that guide you in the right direction 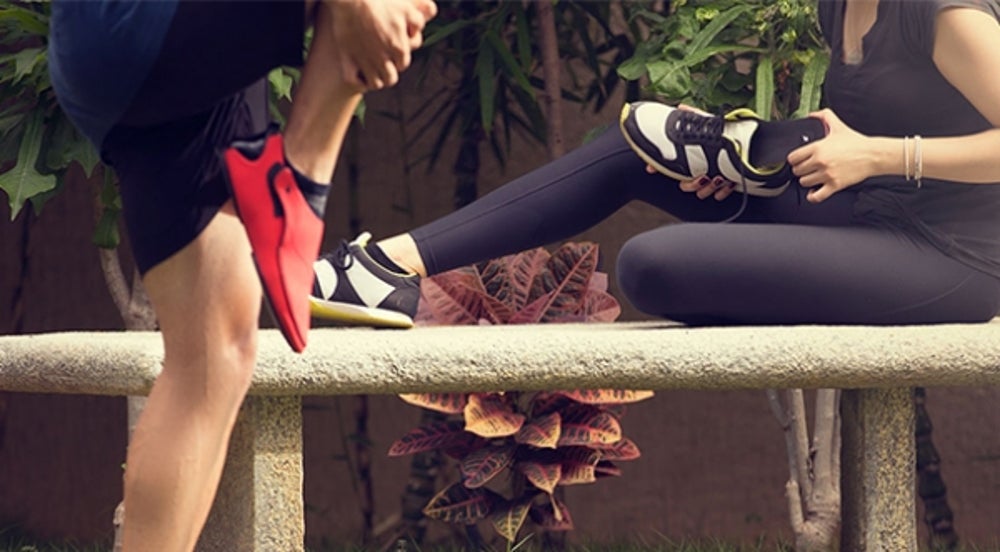 Now, if you’re walking somewhere new, you no longer need to focus on the audible directions from your smartphone. Let Lechal shoes or insoles be your guide instead. The insoles of the shoes connect with the corresponding app (available for iOS, Android and Windows) via bluetooth. Then, as you walk, a vibration will alert you when you need to turn. A buzz in your left shoe will signal you to take a left -- the buzzing gets stronger as the turn nears -- and a vibration in your right shoe means to turn in that direction. If you need to turn around, both feet with vibrate at once.

While the footwear can’t yet help you avoid obstructions in your path (this feature is expected in the next model), it allows the 285 million people around the world with visual impairments to focus more on your environment. “Touch is such a valuable sense, and it’s underused,” says Krispian Lawrence, the founder of Ducere Technologies, which makes the product. “Most tech today that’s available for the visually impaired gives them audio feedback, but if you’re visually impaired, your primary sense is your sense of hearing, so the feedback is more of a distraction from letting you focus on what’s around you.”

The shoes, which an estimated 30,000 people have pre-ordered, are expected to start shipping early this summer. Bonus: they’re also great for navigating hiking trails. 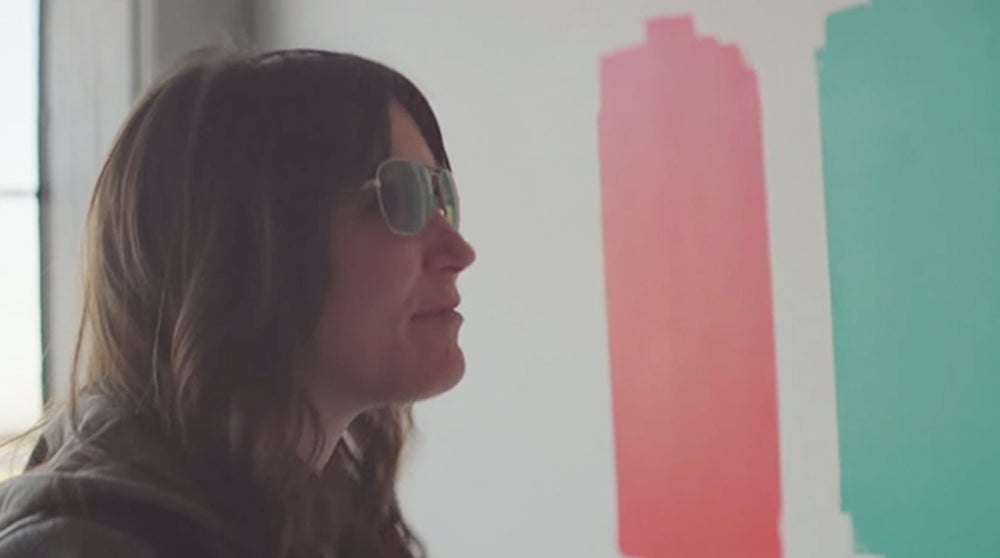 Although they look like typical sunglasses, Enchroma Lenses help colorblind people see all different hues. Color blindness results from spectral overlap, which is when the photopigments (aka: light-absorbing molecules in retinal cone cells) absorb more light than they should. Usually, of the three types of cones in the retina, one absorbs green light, one absorbs blue light and a third absorbs red light. If a green cone absorbs too much red light, for example, that spectral overlap means that the person will have a difficult time distinguishing those colors.

The good news is that in the large majority of cases of red-green colorblindness (over 80 percent), the amount of overlap is not complete, making it possible for the lenses in EnChroma shades to help. The exact technological process is tricky -- it involves computer algorithms and linear programing before the filter was even created -- but the Cliff’s Notes are that they help to separate the crossing signals between cones, creating more color variation. This article talks more about it.

Related: This New App Aims to Be the Yelp for People With Autism 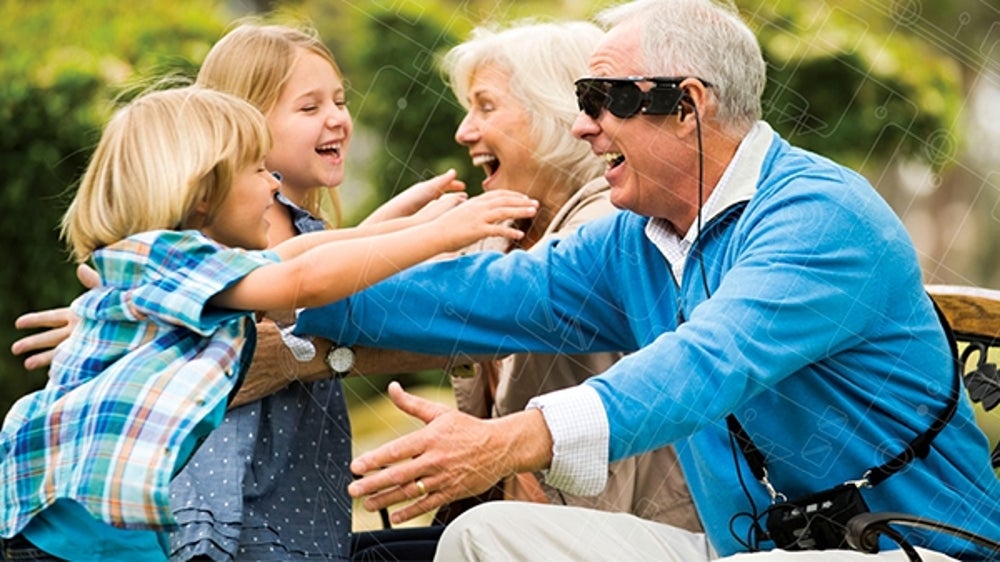 You may have seen the video of a man who sees his wife for the first time in years through the use of the Argus II, a so-called bionic eye. Dr. Robert Greenberg, CEO of Second Sight, worked for 25 years to make that one recorded moment possible.

Greenberg is the man behind the Argus II, which is designed to help patients with retinal pigmentosa -- a degenerative disease that leads to blindness -- to have some form of vision. The system received FDA approval in 2013; Greenberg received 300 issue patents of technology in the process.

First, in an outpatient procedure, patients are implanted with a small device that sits on their retinas. The passive device is only activated when the patients wear the corresponding glasses, which has a camera. Then, when the glasses are on, the signal from the camera gets turned into electrical impulses on a patient’s eye. These impulses allow the patient sees a spot of light corresponding to what’s in front of them.

Dr. Greenberg says the resulting image is low-resolution and in grayscale, though he has figured out how to produce color and says the device could be upgradeable. He compares it to lights on a scoreboard or pixels on a monitor.

More than 100 people have used the device, which retails for just under $145,000 (plus surgery and physicians fees), and the responses are universally positive. “We hear many stories about being able to see a loved one again and move about independently,” he says.

4. An app that points out who and what’s around you 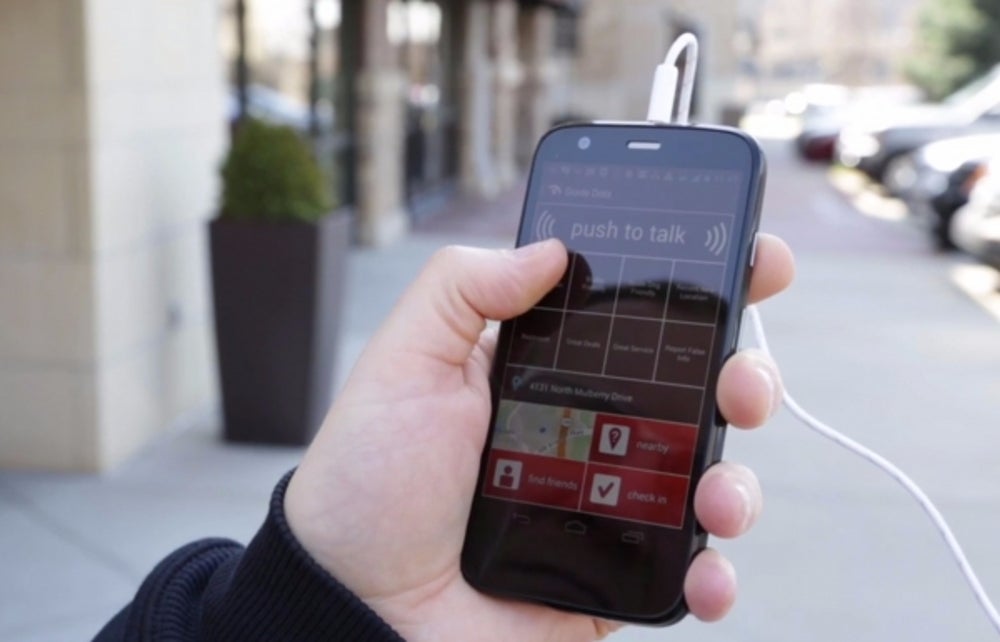 Although this is the second directional product on the list, this one is an app that relies on audio rather than vibration. Guide Dots, the result of a collaboration between three different teams spanning three continents, is different in that it works with social networks and crowdsourcing sites to provide extra information. In addition to connecting with Facebook to see which friends are nearby, or informing you of points of interest with geotagging, the app lets you check in to places and also responds to simple voice commands. In 2013, the beta version of Guide Dots was shortlisted at the Cannes Lions International Festival of Creativity. It’s free for Android.

5. An app that brings a Brailler to your tablet 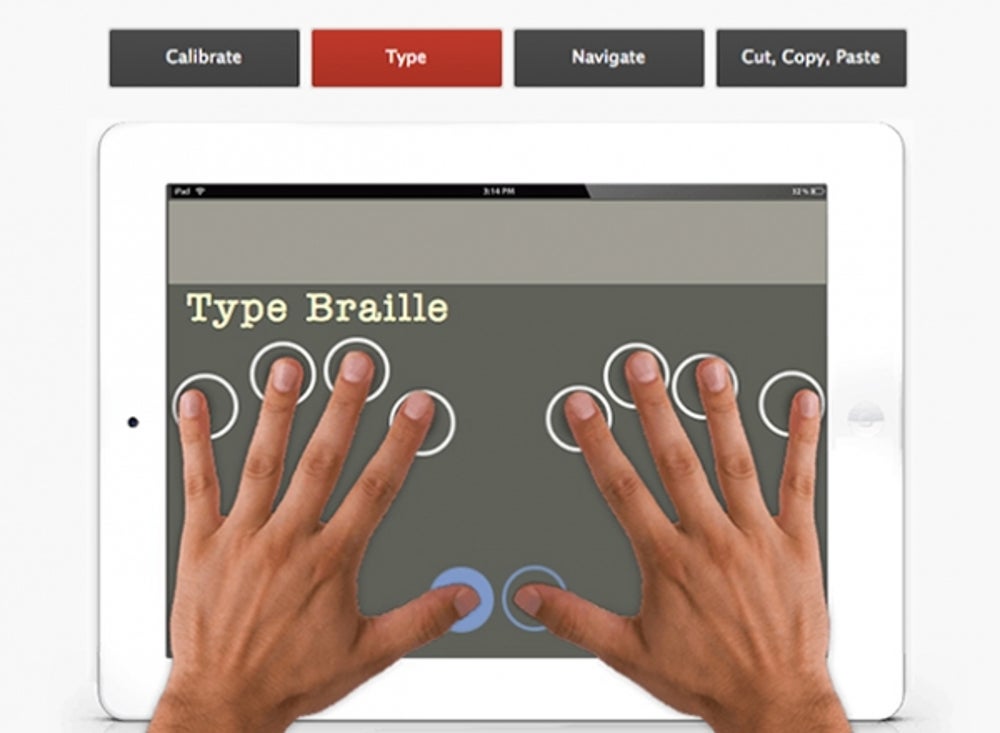 Before he mentored students in a summer engineering program at Stanford University, Sohan Dharmaraja went to the Stanford Office of Accessible Education looking for his next idea. He found it when someone showed him a Brailler, the laptop-sized, typewriter-esque device that people with blindness use to write up documents.

The only direction given for the summer program was that participants had to “do something on a tablet,” so Dharmaraja thought of making a modern brailler that can be used with today’s tablet technology.

Meet iBrailler Notes. He worked with an associate professor of mechanical engineering Adrian Lew and with Adam Duran from New Mexico State University to create a prototype in just two months. The free iOS app -- meant only for the iPad -- is a flat-screen brailler. By placing both hands on the tablet, the app calibrates to put the keys under a user’s fingers. To recalibrate, the user just lifts their hands off the screen, them places them down again. Using the standard finger combinations of a physical brailler, a user can type notes or documents. Other features include one-click access to Google (the search results are then read aloud with Apple’s VoiceOver option) and the ability to edit the documents using cut-and-paste. Moreover, the app can be used to express mathematical formats, supports multiple Braille standards and offers three different colorblind-friendly palates as well as large text for users who retain some vision.

As Dharmaraja told the Stanford Report, “Being born with a disability shouldn't mean you get left out of today's technology revolution.”