15 Internet Relics We Miss (and Some We Don't)

Remember the days of dial-up internet? Or when you were greeted with “Welcome! You’ve got mail!” whenever you logged into your AOL account? Or how about your quirky AIM screen name you used to chat with “buddies”?

If you’re older than 17, you know exactly what I’m talking about. The nostalgia runs deep.

Nowadays, we take for granted our speedy Wi-Fi- and 4G-enabled smartphones. But the world wasn’t always fairies and unicorns. Before the magical lands of Facebook, Gmail and social media, well, the internet was a completely different place.

Take a trip down memory lane with these 15 internet relics.

13 Pivotal Internet Moments That Forever Changed How We Live, Work and Play

Why the Internet Needs the WayBack Machine, the Site That Archives the Web 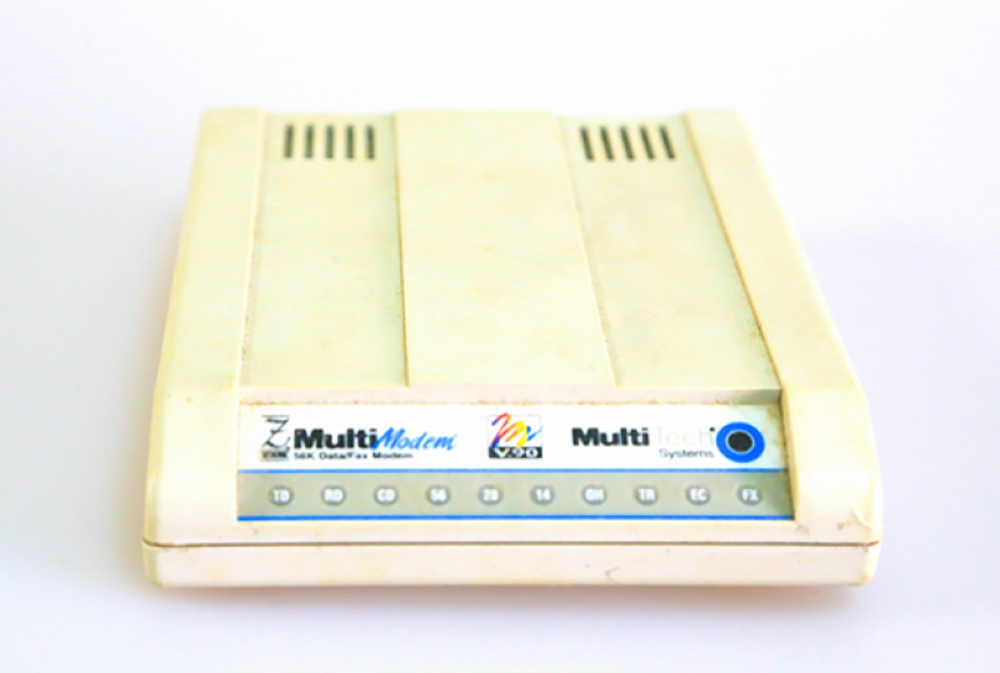 Well, maybe we don’t really miss it, but it’s safe to say that for most of us, that dialing and ringing sounds of the dial-up modem is stamped in our memories forever. The 15 minutes spent disconnecting the landline, connecting the computer and waiting for the ringing to finally commence were the efforts we took to once get on the web.

I can hear it in my head now: The distinctive and terrifying sound, which became totally obsolete after cable modems and Wi-Fi.

For most people, browsing the web didn’t last long -- you had to disconnect when someone needed to make a phone call.

Check it out here to jog your memory. 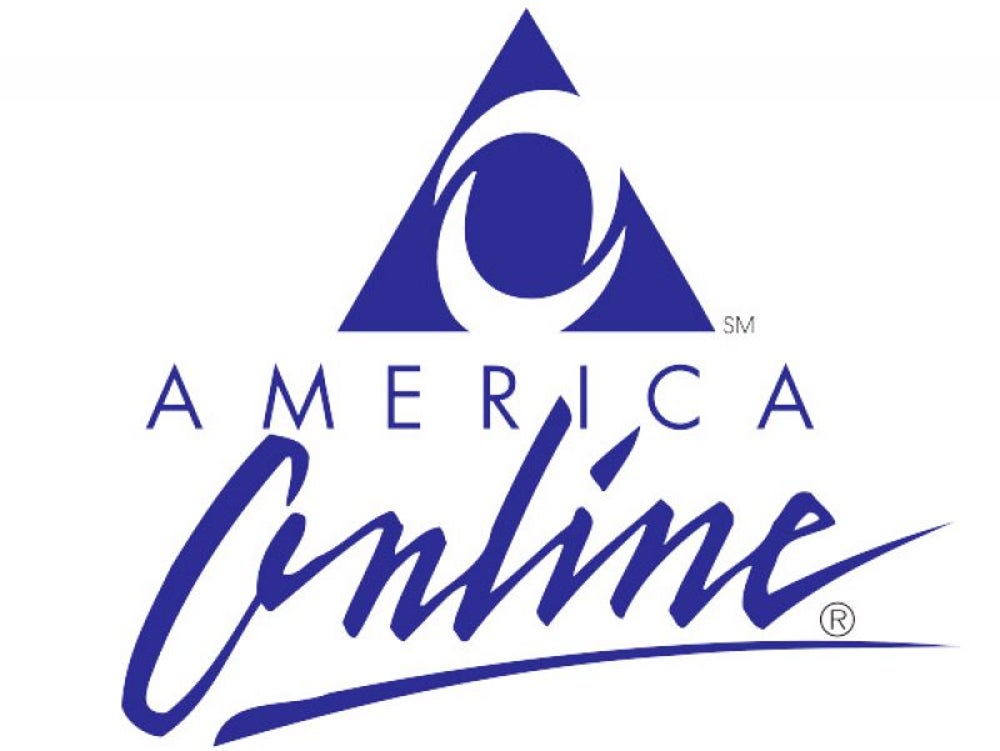 Nowadays, you log into your email and expect to have a jam-packed inbox. But remember the days before email became a societal norm? For most of us, after logging into our AOL accounts, we had the joy of a voice greeting us with “Welcome, you’ve got mail!”

On our way out, AOL’s voice would give us a pleasant “Goodbye” too.

Not only was the “You’ve got mail” notification something people associate with their first email accounts, it was also inspiration for the hit '90s rom-com You’ve Got Mail with Tom Hanks and Meg Ryan. A love story sparked from an "over-30s" chatroom under anonymous screen names, You’ve Got Mail was an early presentation of the internet’s influence on popular culture. 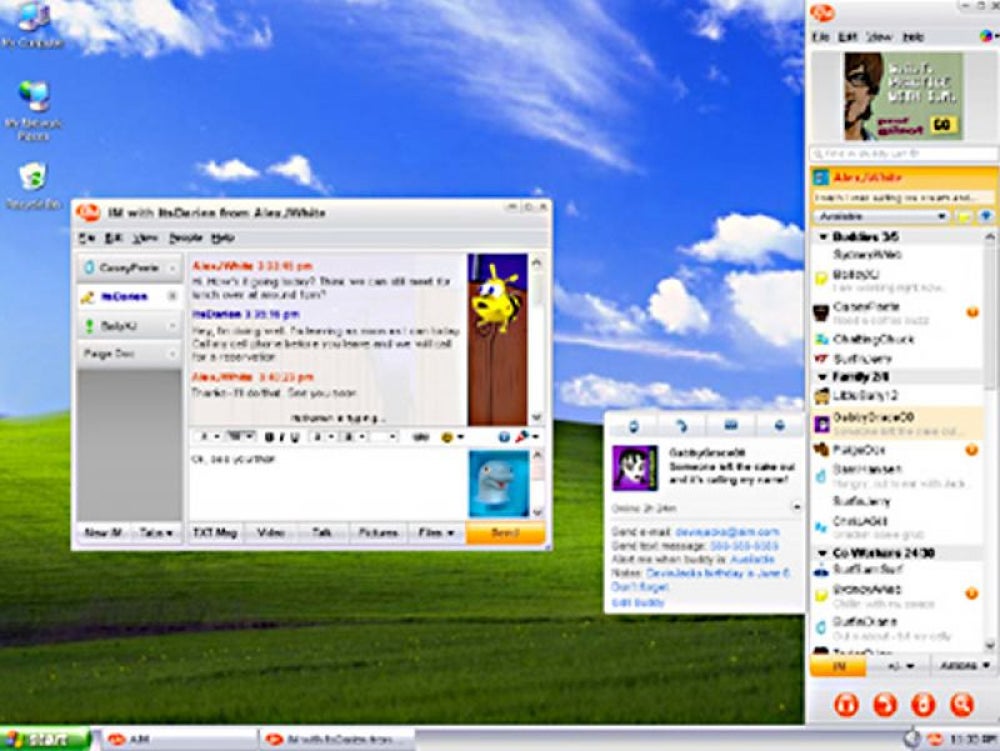 Ahead of its time, AOL Instant Messenger (aka AIM) was the Facebook Messenger of the '90s. Being able to socialize with friends in a virtual setting was a whole new ball park at the time. And it didn’t stop there: Personalized screen names, icons and buddy lists all made the program that much more exciting.

We all remember our first AIM screen names (especially you '80s and '90s kids out there). And embarrassing as they may be, we can’t help but feel a pang of nostalgia for them.

Instant messaging programs gave way to the future of instant communication with smartphone apps WhatsApp, Facebook Messenger and Viber. You may even go as far to include Twitter, which broadcasts your conversations and statuses to a larger audience.

AIM was the gateway to social virtual interaction. 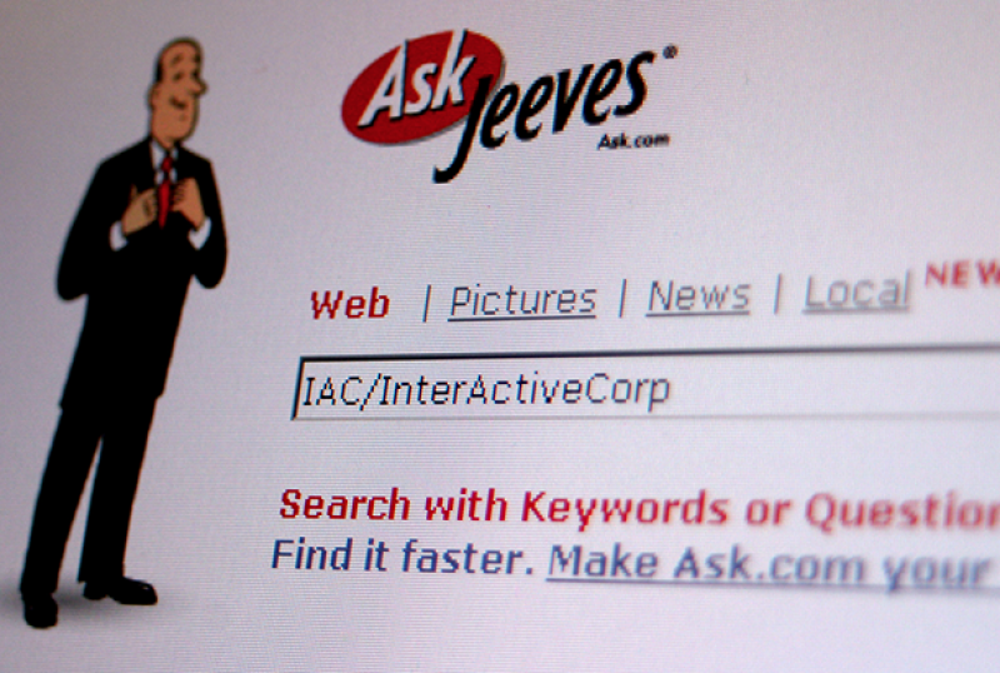 Before Google, there was our favorite man with all the answers: Jeeves. Set up to answer questions in a gentleman-like manner, the “butler” was a go-to when you needed information on any subject.

Loved for his humor and charm, Jeeves was dropped in 2006 -- along with the site’s overall popularity as well. Although the site is still around as Ask.com, without Jeeves it will never be the same.

Related: 13 Pivotal Internet Moments That Forever Changed How We Live, Work and Play 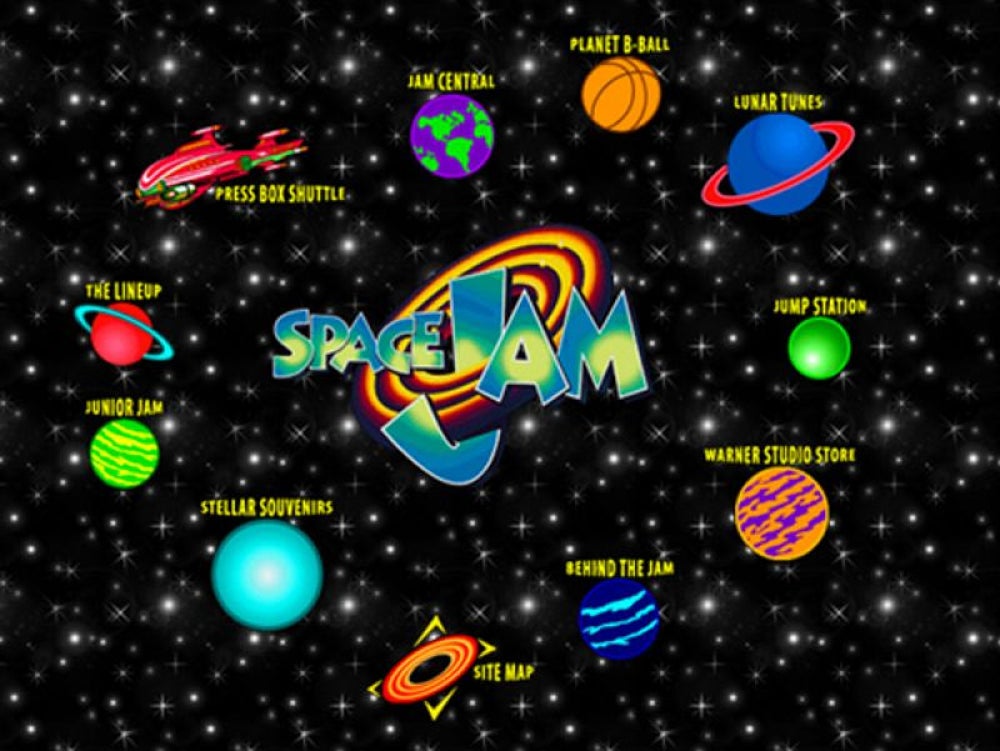 Forget Wordpress or GoDaddy. In the late '90s, when you needed to create a website you turned to GeoCities. Where else could you publicize your life through an animated web page garnished with dancing cats and twinkling little stars?

Back when virtually no other tech company was offering free web hosting, GeoCities filled the demand for personalized websites. Celebrities, brands, businesses, movies (check out Warner Bro.'s Space Jam) -- everyone used Geocities. That is, until Yahoo came around and purchased GeoCities in 1999 -- marking the beginning of the end for the web-hosting service. 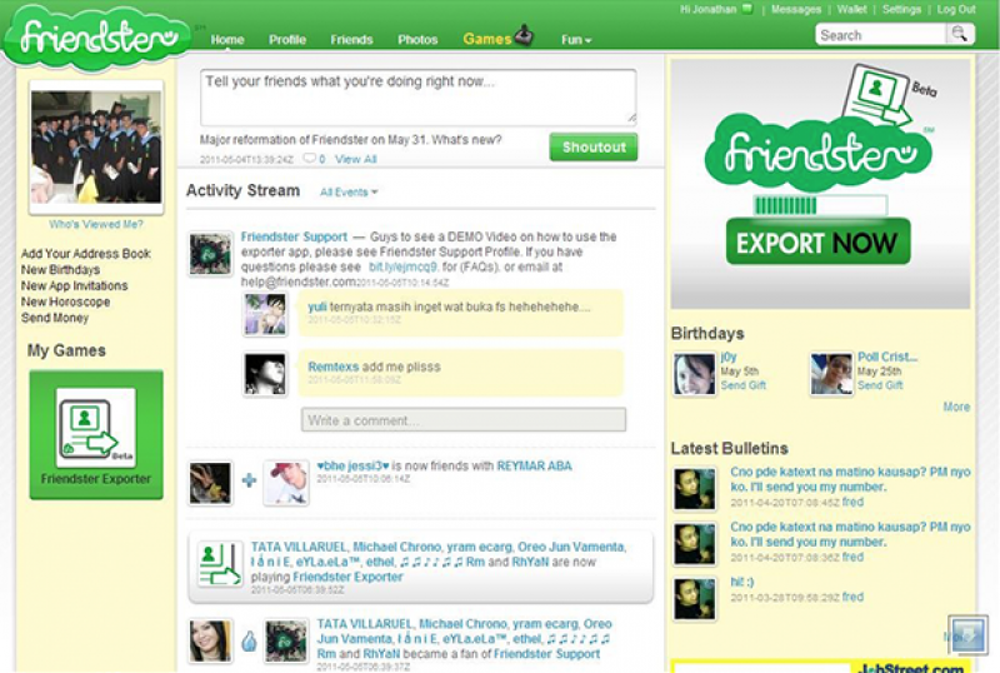 Back when Facebook was open to only college students, there was Friendster, the “mother” of social media.

“Credited as giving birth to the modern social media movement,” as reported by CBS News, Friendster was the social site to link up with old friends and stalk ex-lovers (until later when you found out that users were notified who viewed their profiles -- embarrassing, yes, but hey, we’ve all been there!).

Friendster was fresh, exciting and addicting. It made meeting strangers through the web less intimidating and socially acceptable -- before we realized how dangerous that actually was. But with a number of technical hiccups, Friendster eventually lost steam and fell into the throes of its rival, MySpace. 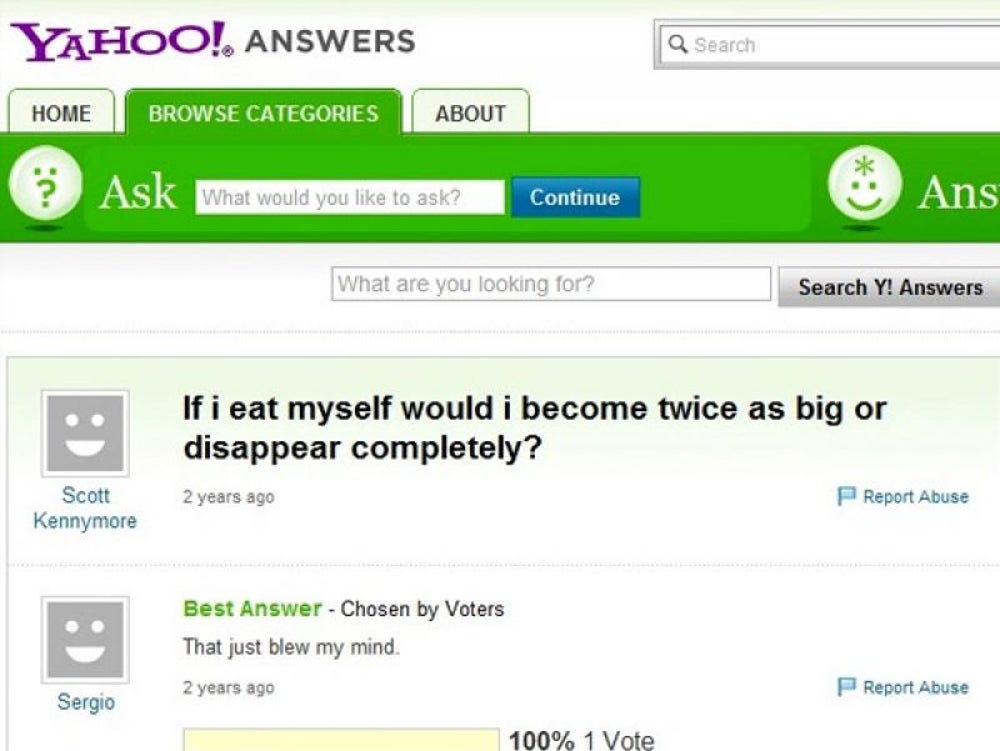 "HOW DO I TURN OFF CAPSLOCK? I ACCIDENTALLY TURNED IT ON YESTERDAY AND I DONT KNOW HOW TO TURN IT BACK OFF."

Someone can help you with that! In 2009, when you sought real answers, Yahoo Answers was a great place to go, as you’d typically receive a response within minutes. And if you had a rather embarrassing question, you could post anonymously.

Nowadays, flooded with trolls and ghosts, getting a question answered on the site is highly unlikely -- or it will take a long time. We recommended sticking to Google. 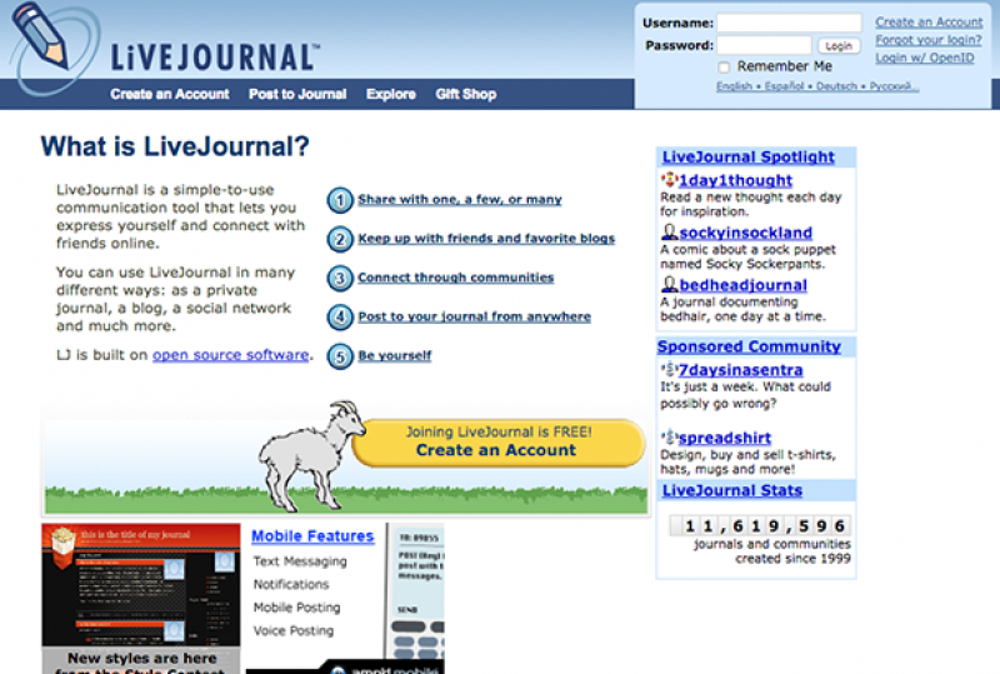 Before Facebook, Twitter, MySpace and even Friendster, LiveJournal was the go-to blogging platform that people took to to share what was going on in their lives.

Forget about actually writing a letter or jotting down thoughts in a diary, LiveJournal made life easier. It offered internet users a way to communicate with friends through open letters, write about your personal life or connect with users of the same interests. LiveJournal was the mother of blogging.

Before you tear up at the demise of LiveJournal, we have news for you: You can still blog on the platform -- it surprisingly still receives a number of monthly active users.

Related: 15 Throwback Web Pages That Show Us How the Internet Has Changed 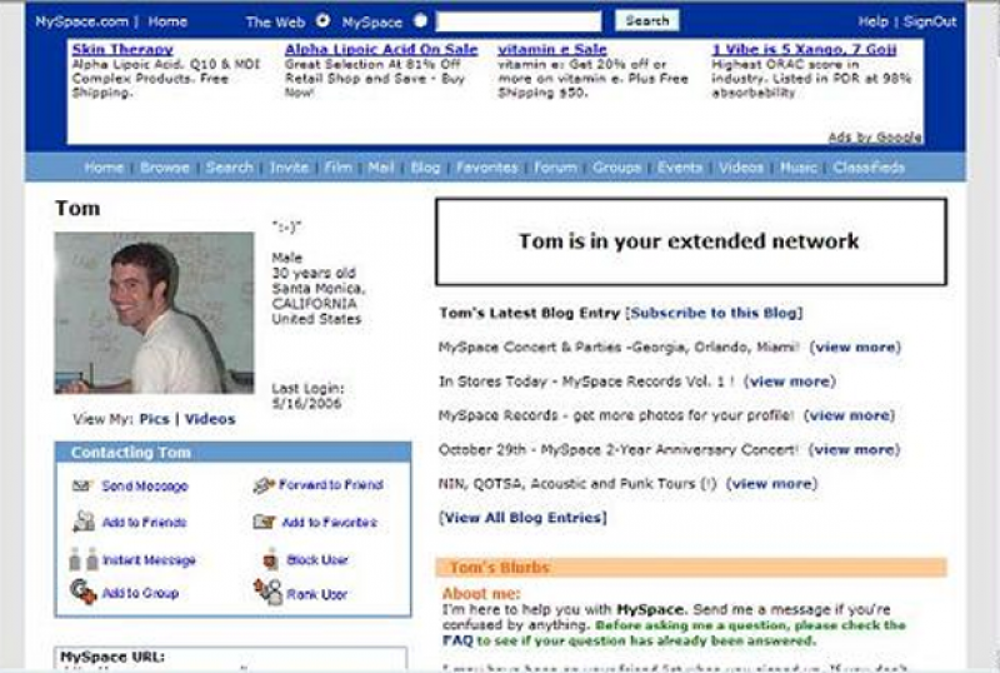 Before Facebook ruled the world, there was MySpace -- the social networking site that attracted kids and (young) adults alike. The social channel not only let you connect with friends, but bedazzle your personal page, add obnoxious background music, take and share quizzes and pick and choose your “Top 8” friends (seven if you exclude Tom). 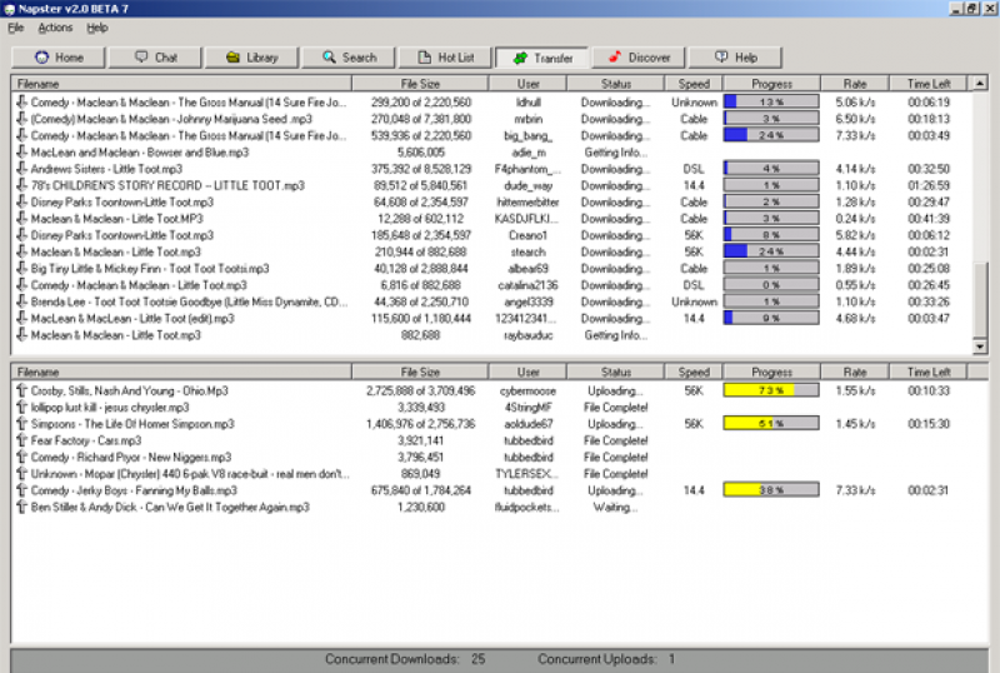 Launching the digital music revolution, Napster was one of the most popular online music services -- as well as one of the most controversial. With angered artists and record labels, Napster’s demise was long foreshadowed. The company lost a copyright lawsuit in 2000, dealing it a fatal blow. Why continue to use Napster if you actually had to buy the music?

Bought out by Rhapsody in 2011, Napster eventually fizzled. However, earlier this year, Rhapsody changed its name to Napster, marking a return of sorts. 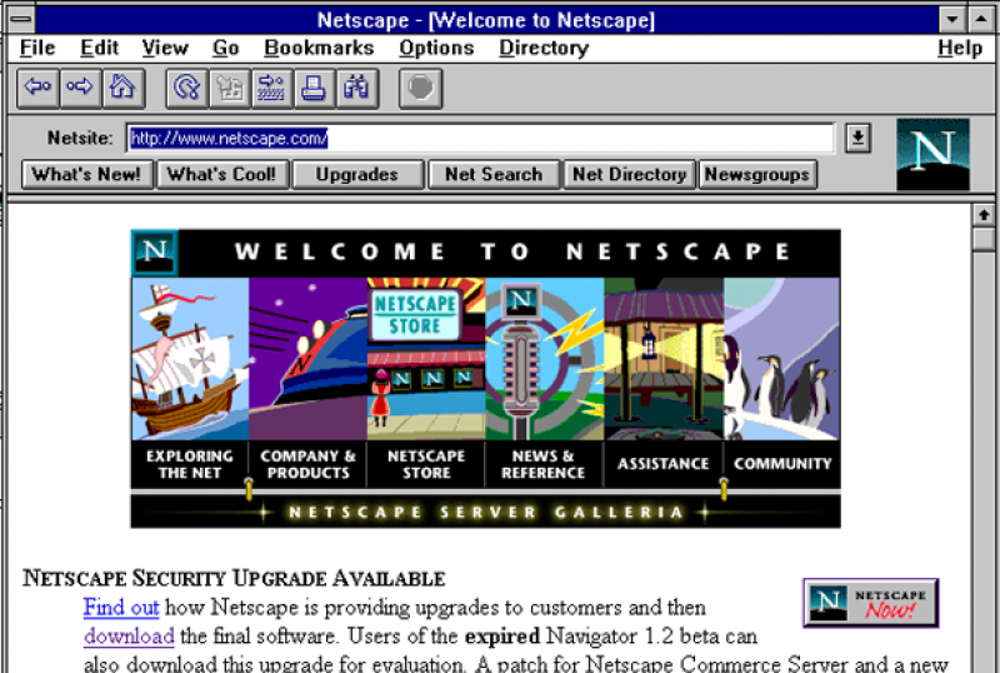 Browsing the web used to come at a cost. In the early days of internet browsing, Netscape was not only the leader, but the first company to monetize the World Wide Web -- that is until Internet Explorer came around and dared to challenge it. In its short-lived era of dominance, Netscape soon lost the “browser war” to Microsoft’s IE, which offered free services and an easy-to-navigate system.

Regardless of its defeat, Netscape marked the beginning of internet browsing. Its slow and painful decline launched a revolution that shaped the future of internet navigation forever.

Related: Netscape's 18th Birthday is Here. Here's Why You Should Care. 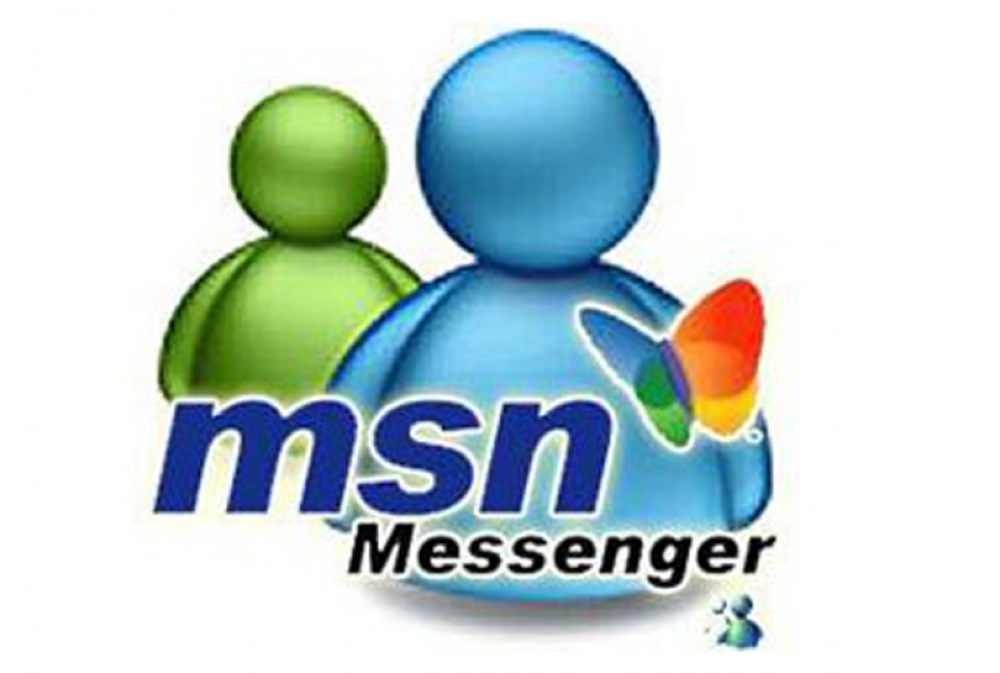 Were you an AIM or MSN baby? Usually, that depended on where most of your friends signed up.

In a battle against AIM, Microsoft’s messaging service fought for chat dominance in the late '90s and early 2000s. Like AIM, creating a personalized username and choosing an emoticon were the first steps to launching your virtual social career. MSN even let its users “nudge” a friend who wasn’t responding quickly enough. 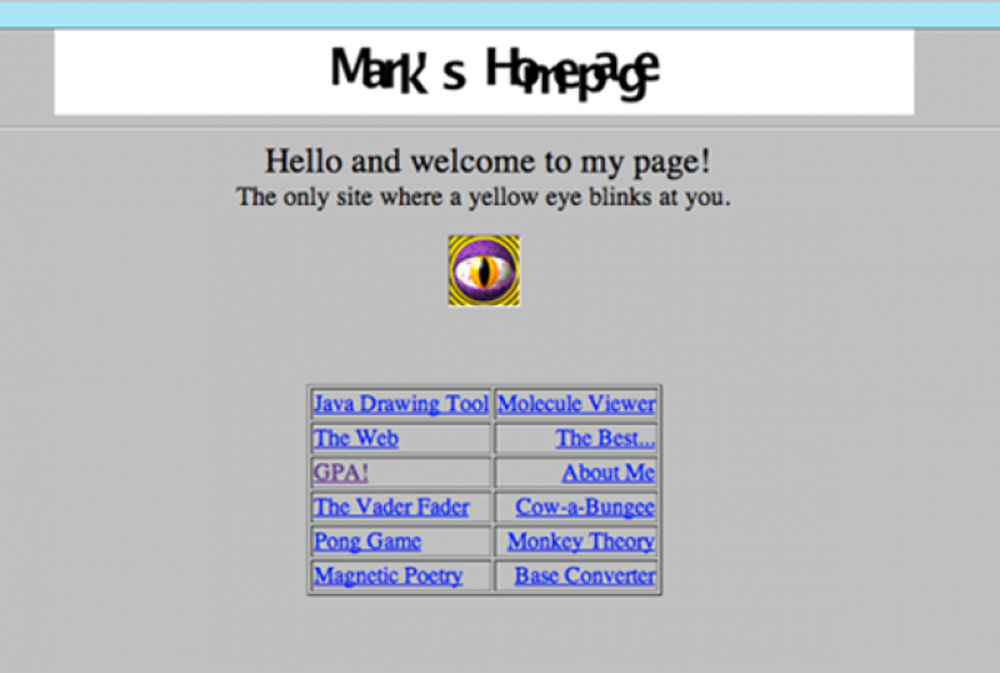 While the internet was still in infancy, website host AngelFire was born. Like GeoCities, AngelFire offered people a chance to create their own webpages, with their own URLs (with Angelfire.com at the beginning).

These horrendous-looking sites spread like wildfire in the '90s -- even Mark Zuckerberg had one.

Ultimately, they set a great example of how a website shouldn’t look.

Related: Why the Internet Needs the WayBack Machine, the Site That Archives the Web 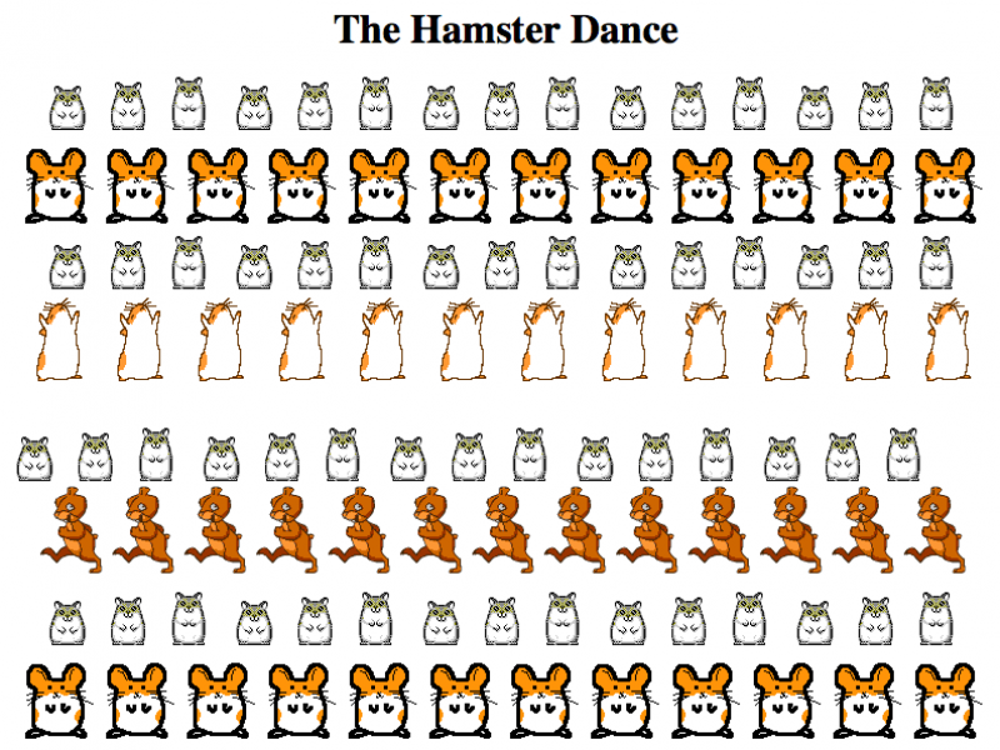 Don’t remember the hamster dance? Maybe that’s because you spent your precious time on the internet looking up useful information. For those of us who had time to waste, the hamster dance was a global '90s hit.

As one of the first GIFs, the animation featured 392 hamsters dancing to Roger Miller’s “Whistle Stop.” And if that’s not strange enough, the GIF went viral -- taking over millions of computer screens around the world from emails to blogs to even newsgroups.

The early GIF influenced commercials, music and merchandise such as clothes and toys. 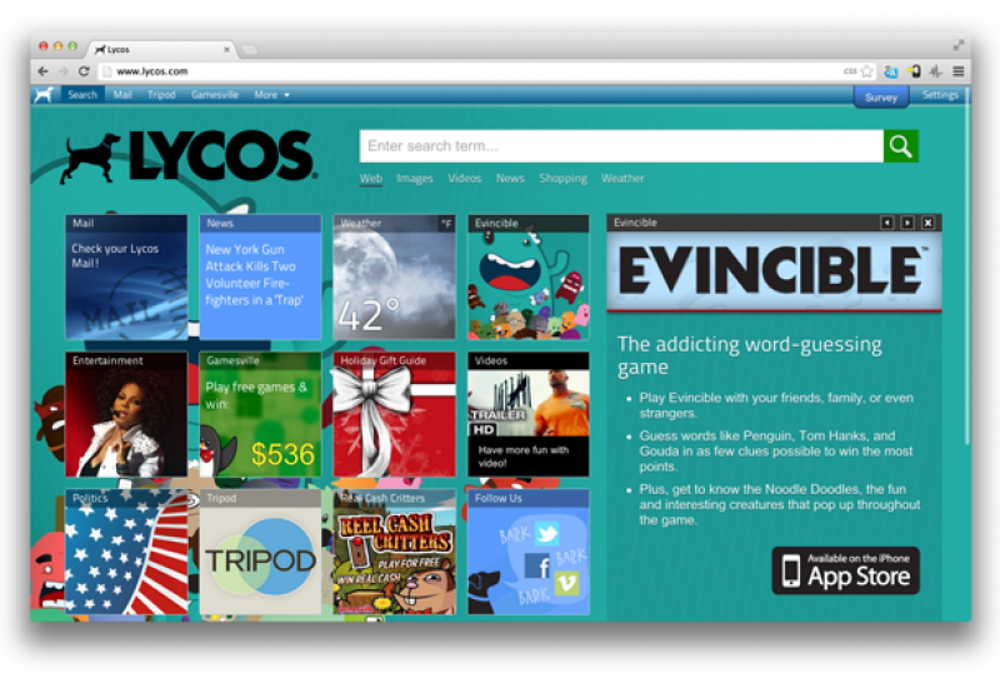 One of the earliest of its time, Lycos, the search engine that doubled as a website host, catapulted into popularity in the early '90s with its massive and growing catalogue of web documents. With the most accurate web searches, Lycos was one of the early databases that organized search results in ranking of relevance and word matching.

Also like GeoCities and AngelFire, it contributed to the ugly homepage fad. Allowing users and companies to create their own websites, Lycos flew to success -- enough so, that it's still in business today. So if you wish to take a peek into the forgotten history of the web, head over to Lycos -- although the experience won’t quite be the same. Ch-ch-ch-changes.