For these companies, commemorating Pride is about more than sporting rainbow colors.
Next Article

It's been two years since the Supreme Court ruled in favor of marriage equality in all U.S. states, and this week marks 48 years since the Stonewall riots in New York City. On June 28, 1969, violent demonstrations broke out between LGBTQ patrons of the Stonewall Inn and police who attempted to raid the bar. Stonewall was a watershed moment for the modern LGBTQ rights movement, and it’s been commemorated annually ever since.

Today, remembrance of this momentous event takes the form of Pride events every June. People around the world celebrate the progress that has been made for LGBTQ rights and liberation over the past half century, as well as speak out to promote further decreased marginalization of people who are underrepresented or oppressed.

Related: How 10 Brands Thoughtfully Chimed In on President Trump's Inauguration

Pride Month 2017 is coming to a close, and the past few weeks have been filled with parades, street fairs, performances and other events. Many of these were sponsored by companies, from banks to mobile carriers. NYC Pride alone had 61 corporate sponsors this year.

Some people have expressed skepticism of brands sponsoring, retrofitting their logos with rainbow colors or otherwise participating in Pride, arguing that these companies are opportunistic, or simply looking to get in on the party -- in some cases without providing substantial support for marginalized groups broadly.

Companies should be aware of these concerns when they acknowledge or celebrate Pride. Many intend, through their participation, to signal that they value LGBTQ rights as human rights, and that demonstrating this is worth any pushback they may face, including from potential customers whose values differ. They aim to convey solidarity, allyship and oneness, often in a symbolic way. Many take it a step further and offer support or donations to organizations dedicated to human rights work.

“If you do it for the right reasons, rather than it just being a billboard for your product, you will build trust that you are there because you want to be an ally,” said Tiffany Apczynski, vice president of public policy and social impact at Zendesk, in an interview with MarketWatch.

Click through to see how various brands celebrated Pride this year. 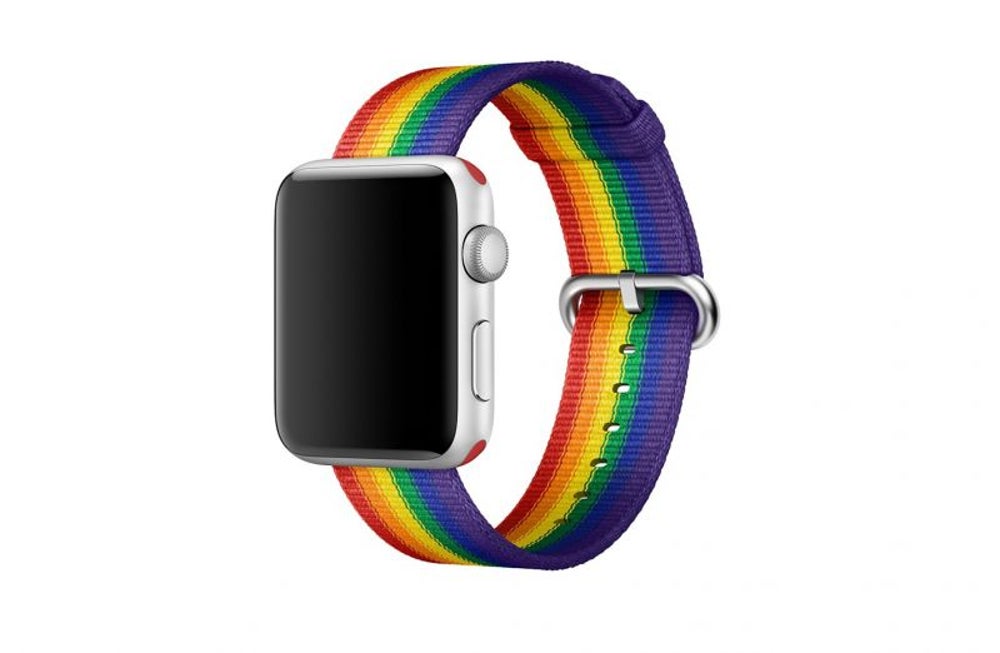 Apple debuted a rainbow-striped nylon watchband for Pride this year, from which it is donating some of the proceeds to LGBTQ advocacy organizations. On the webpage for the $49 band, the company specified GLSEN, PFLAG, The Trevor Project and ILGA as beneficiaries.

Related: Tim Cook Is Gay. But As Apple's CEO, That Isn't His Biggest Revelation. 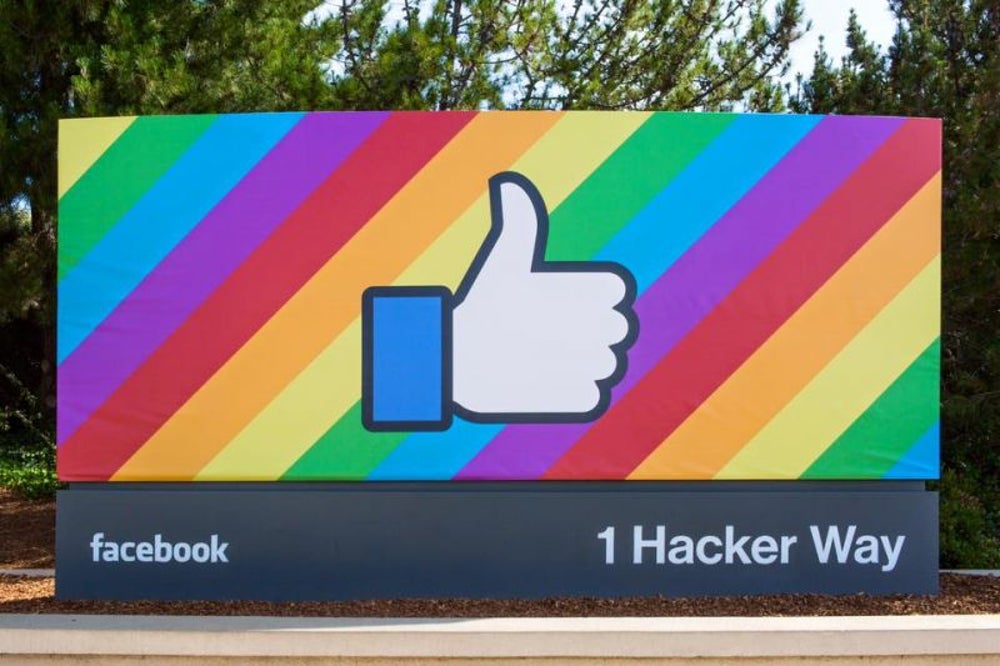 The social networking giant rolled out several features to celebrate Pride, from rainbow profile photo borders to stickers and other special effects for photos shared in Messenger. It also encouraged users to start or support fundraisers supporting LGBTQ causes and laid out its “commitment and participation,” explaining the ways in which it has supported “LGBTQ rights, through [its] products, policies and benefits to [its] employees” over the years.

However, one Pride feature Facebook added caused controversy: a new limited-edition “reaction” symbol under the “like” function, available to some users alongside the existing emotive faces and heart.

“People in major markets with Pride celebrations will be able to use a temporary rainbow reaction during Pride month,” a Facebook executive wrote in a news post. “You can also like this page to access the reaction, however, because this is a new experience we’ve been testing, the rainbow reaction will not be available everywhere.”

The fact that the rainbow option was not available everywhere made some wonder whether Facebook meant to minimize the number of anti-LGBTQ rights users who would see it.

Both Lyft and its competitor Uber have added features to their apps such as rainbow cars (or cars with rainbow trails behind them) in years past. On June 7 of this year, Lyft announced that it would donate $100,000 to LGBTQ causes over the next 12 months. The company partnered with the Human Rights Campaign on an initiative called “Round Up and Donate,” which allows Lyft users to change their settings to round their fares up to the nearest dollar and donate the extra cents.

Related: Lyft Co-Founder John Zimmer: 'You Should Never Veer Off the Path of Your Own Values' 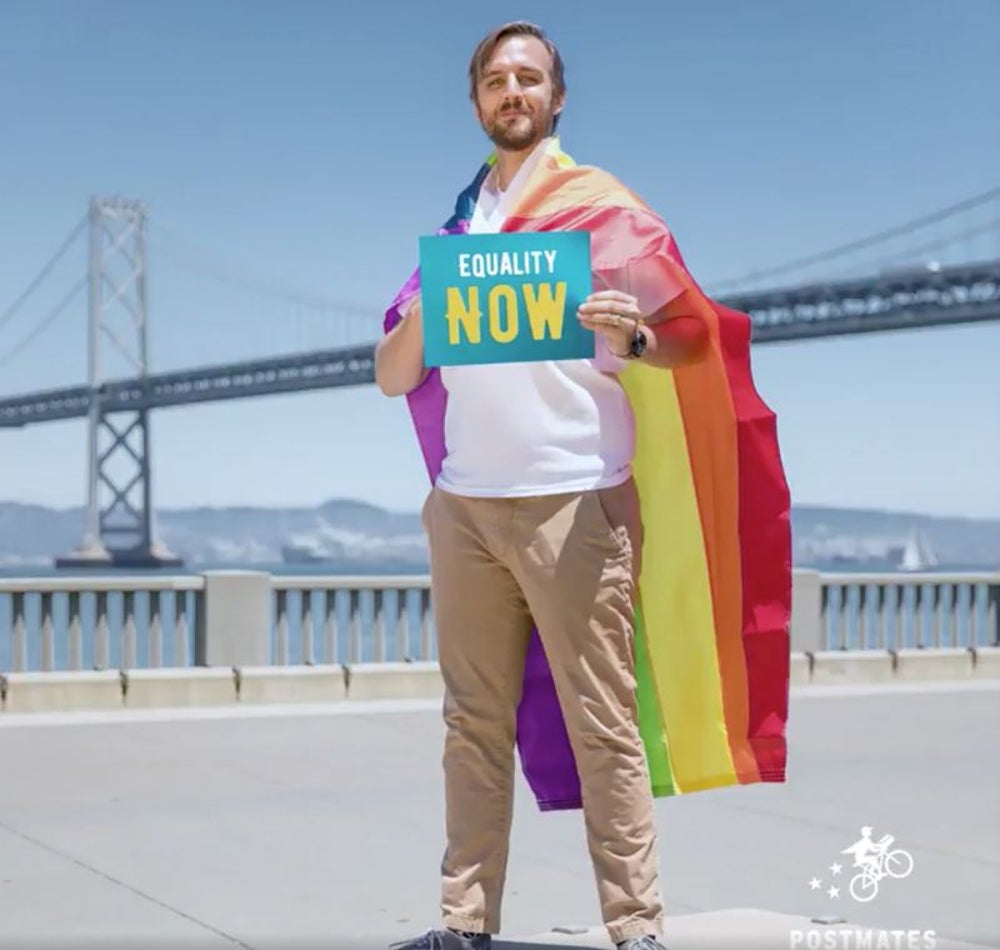 Another company that partnered with the Human Rights Campaign was delivery service Postmates. On June 23, the company launched the following campaign on Twitter.

What does #PRIDE mean to you? Tell us w/ #PrideFTW @Postmates & we’ll donate $1 to the @HRC for every post! #LoveIsLove #Pride2017 pic.twitter.com/nkIHMmbeak

Related: The People You Hire Make or Break Your Business, Says the Founder of Postmates

During Pride weekend (June 24 and 25), Postmates also offered a special promotion in cities across the U.S. The company waived the delivery fee when customers ordered food from participating restaurants. 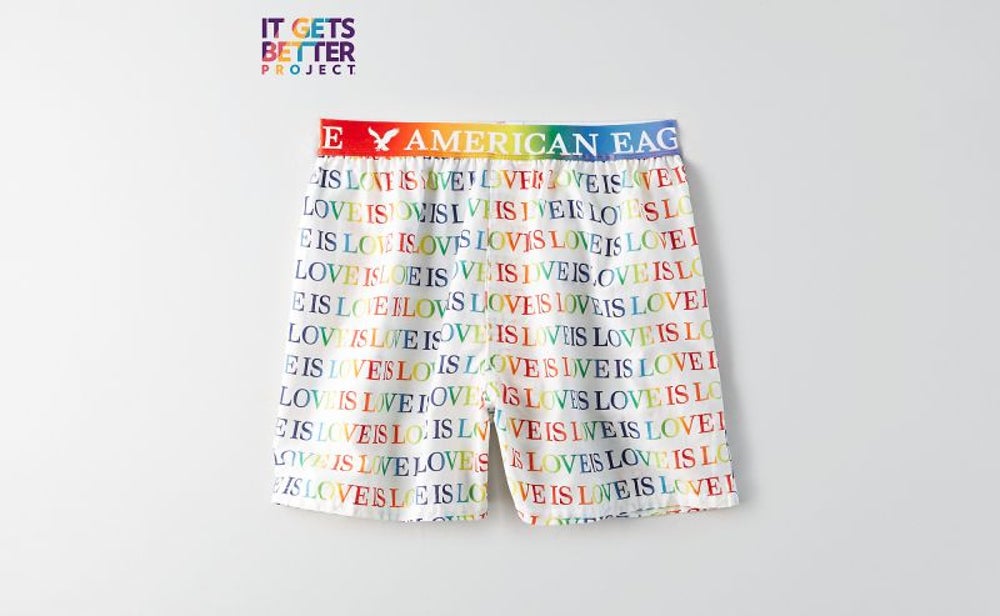 The clothing retailer sold special T-shirts, tank tops, underwear, necklaces and more as part of its 2017 Pride Collection. According to the company’s website, 100 percent of the proceeds went to the It Gets Better Project in support of LGBTQ youth.

The music streaming service launched a Pride page, led by a section called “I’m With the Banned” featuring combinations of animations, videos and music that tell stories about the LGBTQ community’s fight against intolerance and unjust laws. The page also has playlists with names such as “Fierce” and “Transcend,” as well as artist-curated playlists from acts such as Perfume Genius and Betty Who and activist-curated playlists by Alicia Garza, Jose Atonio Vargas and more. 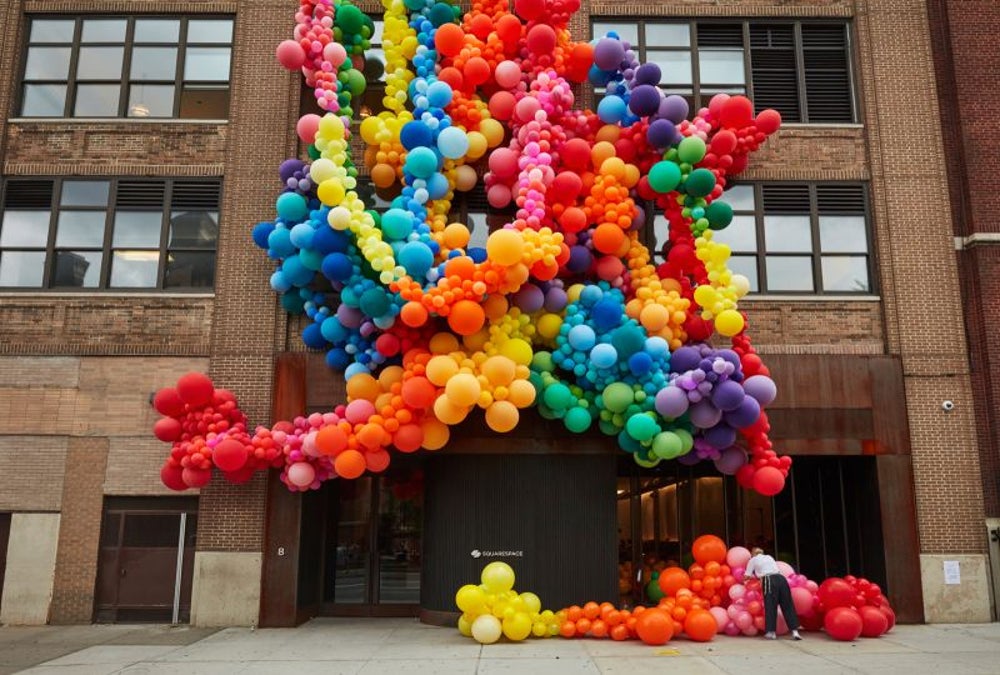 Moving beyond two-dimensional web design, Squarespace collaborated with Los Angeles-based artist and Squarespace customer Geronimo Balloons (Jihan Zencirli) to build a multicolored 15,000-balloon installation on the facade of its Manhattan office building -- located just a few blocks from the end point of the New York City Pride March. The weight of the balloons totaled 500 pounds. Squarespace also sponsored New York City Pride and wrote in a blog post that, as a company, it will continue its “commitment to Diversity & Inclusion through many events and partnerships to come.”

Related: What We Learned From Touring Squarespace's Gorgeous New Headquarters 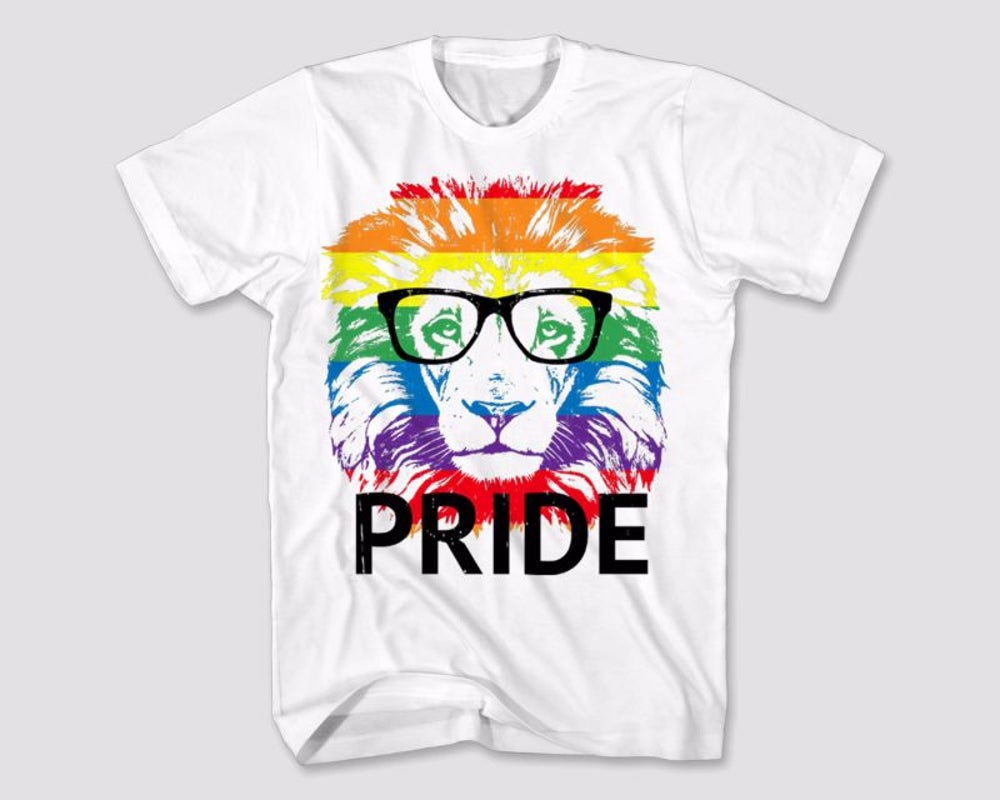 Target has long supported LGBTQ causes, the most prominent recent example being its controversial move to allow transgender customers and employees to use the bathroom of their choice. This year, its line of Pride products includes enamel pins, T-shirts, a unicorn pool floatie and more. The retailer even has shirts for kids that say "I Heart My Moms" and "I Heart My Dads.”

Target first announced company support for marriage equality in a 2014 amicus brief and began incorporating more gender-neutral products and signage in 2015. The company also partners with organizations such as GLSEN. 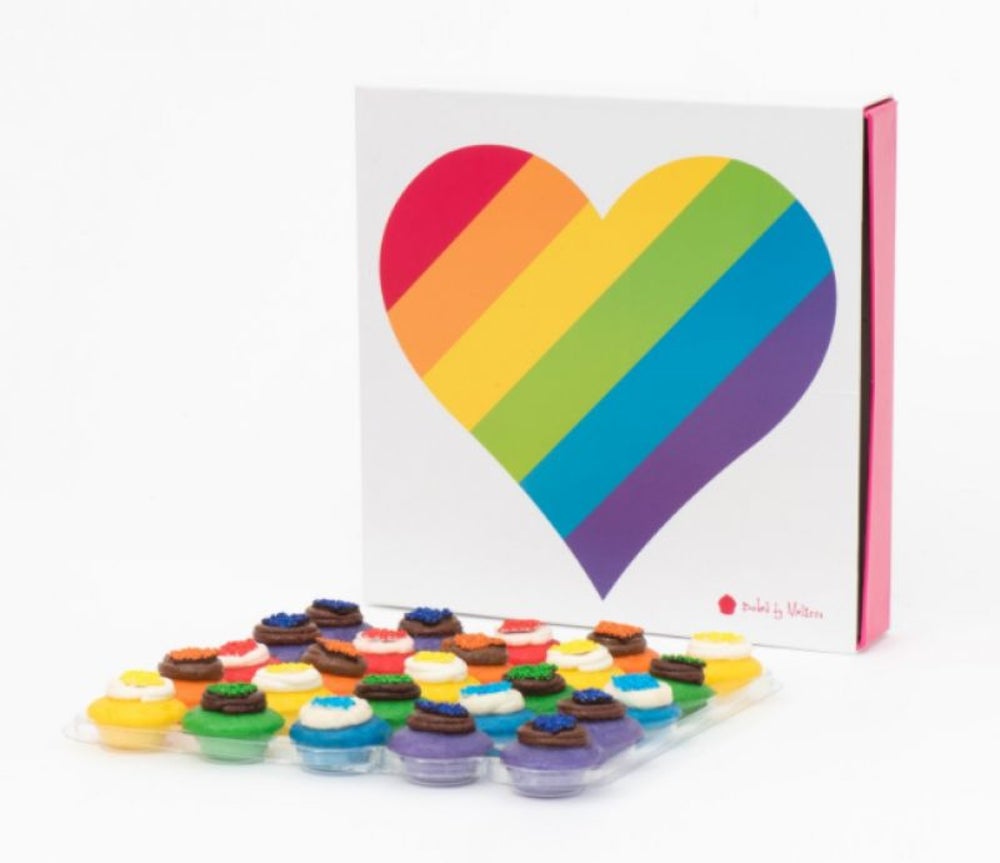 The New York City-based tiny cupcake chain offered a spectrum of flavors in special Pride boxes, decorated with a rainbow-striped heart. “Love comes in all shapes, colors & cupcakes!” Baked by Melissa wrote on its website. The bakery chain also specified that 10 percent of net proceeds from the Pride-themed cupcakes would go to the Lesbian, Gay, Bisexual & Transgender Community Center.

Related: From Cupcakes to Muffins: How Baked by Melissa Plans to Find Sweet Success Once Again 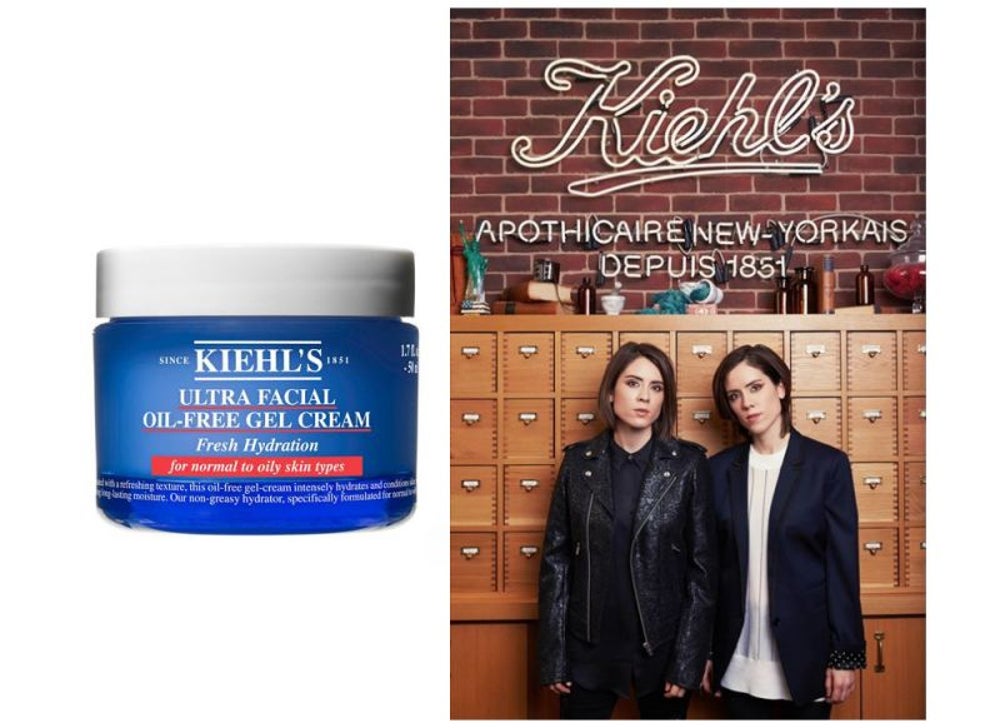 The skin-care company has sponsored New York City Pride since 2010 and participated in the March since 2003. This year, it’s donating $15,000 to The Ali Forney Center, Hetrick-Martin Institute (HMI) and the Lesbian, Gay, Bisexual & Transgender Community Center to support housing, healthcare and education services for New York's LGBTQ young people. Kiehl’s will donate $5,000 to each of these organizations and has encouraged each of them to find a donor to match its contributions for a total of $30,000 raised. The company also accepted donations in its eight New York City stores.

Kiehl's also joined forces with the Tegan and Sara Foundation, an organization named for the sister musician duo meant to help LGBTQ women around the world get access to health services and business opportunities. Through this partnership, Kiehl’s released limited-edition bottles of two of its facial creams, from which it will donate up to $5,000 (100 percent of proceeds) to benefit the foundation.

3 Ways to Foster an LGBT-Friendly Workplace

These Are the 100 Most Powerful LGBT Executives in the World

Promoting Inclusivity Beyond Pride Month: Why We Should Support the LGBTQ+ Community Year-Round