By John Rampton March 13, 2015
Opinions expressed by Entrepreneur contributors are their own.

Every entrepreneur knows that the success of their business ultimately rests on their shoulders. Yes, the product you build and the team you hire are important, but your ability to lead is what carries your company.

With that kind of pressure, it’s easy to feel stressed, lonely and overwhelmed at times. Every great leader has faced a challenge that defined their greatness, which is why we often turn to their advice when needed.

Whether you’re an entrepreneur, business owner, or team leader, here are 50 inspirational quotes on leadership for when you need a little pep talk.

A leader takes people where they want to go 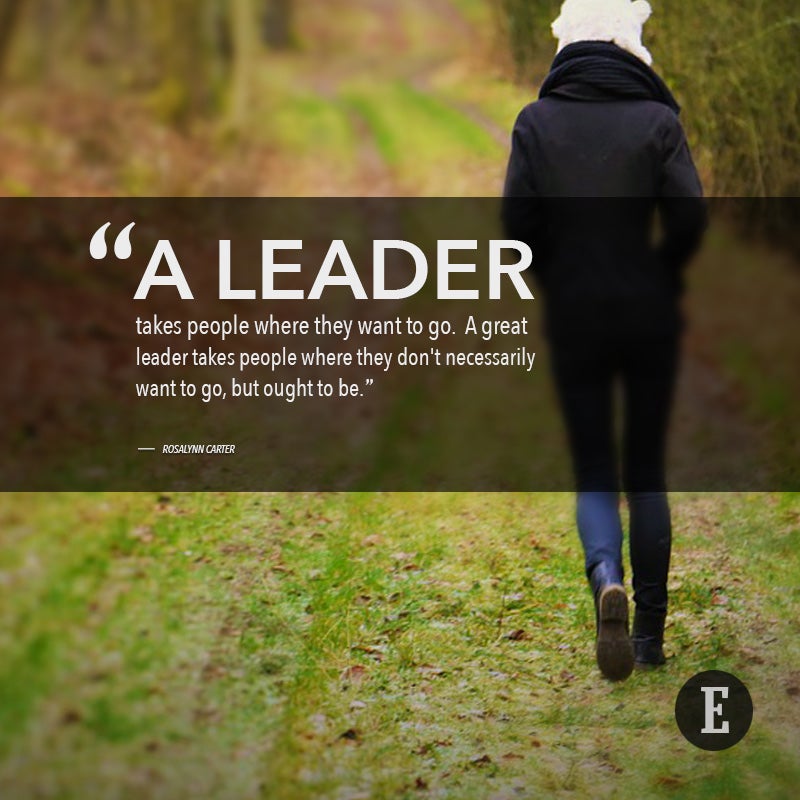 A leader is best

“A leader is best when people barely know he exists, when his work is done, his aim fulfilled, they will say: we did it ourselves.” - Lao Tzu

It's hard to lead

"It's hard to lead a cavalry charge if you think you look funny on a horse." -  Adlai E. Stevenson II

"Great leaders are almost always great simplifiers, who can cut through argument, debate, and doubt to offer a solution everybody can understand." – Colin Powell

The first responsibility of a leader is to

“The first responsibility of a leader is to define reality. The last is to say thank you. In between, the leader is a servant.” - Max DePree

If your actions inspire 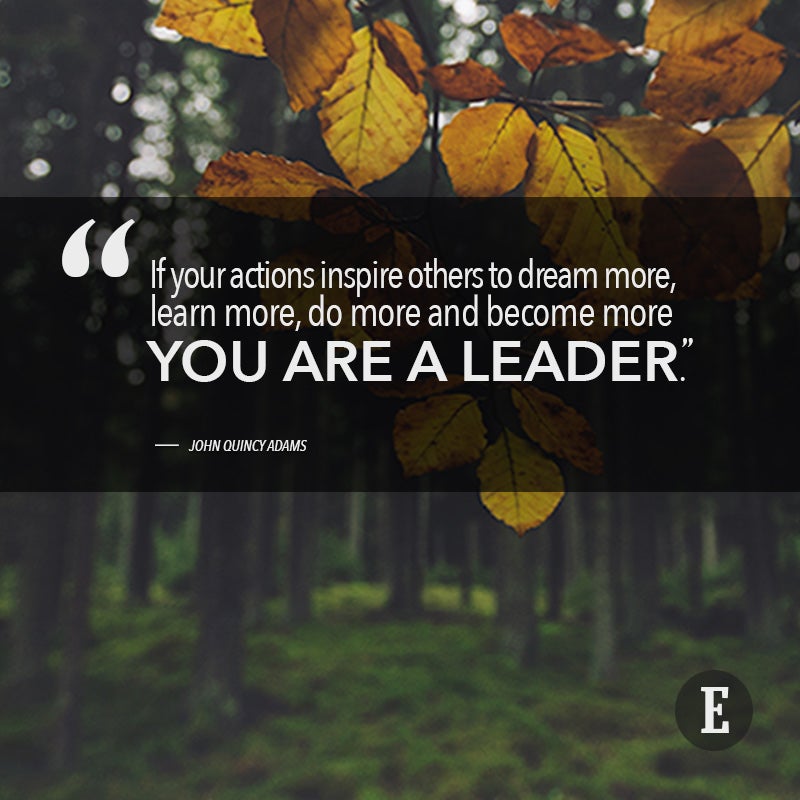 "If your actions inspire others to dream more, learn more, do more and become more, you are a leader." – John Quincy Adams

“A leader is a dealer in hope.” - Napoleon Bonaparte

"A leader...is like a shepherd. He stays behind the flock, letting the most nimble go out ahead, whereupon the others follow, not realizing that all along they are being directed from behind." - Nelson Mandela

He who has never learned

“He who has never learned to obey cannot be a good commander.” - Aristotle

Leadership is the art

"Leadership is the art of getting someone else to do something you want done because he wants to do it." - Dwight D. Eisenhower 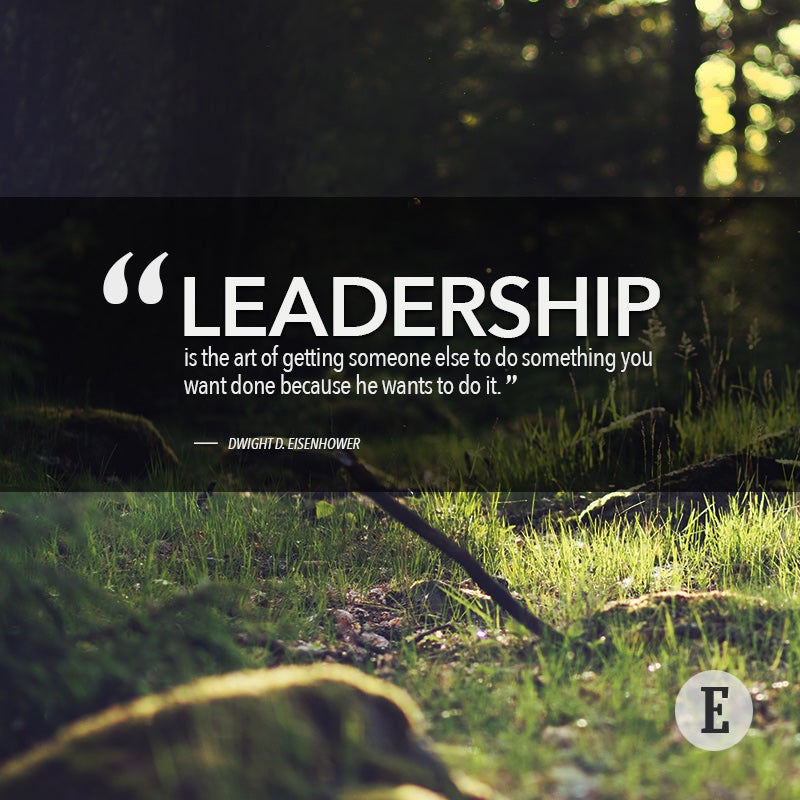 As we look ahead

"As we look ahead into the next century, leaders will be those who empower others." – Bill Gates

A good leader is a person who takes a little more

Become the kind of leader that people would follow

“Become the kind of leader that people would follow voluntarily; even if you had no title or position.” - Brian Tracy

"The leaders who offer blood, toil, tears and sweat always get more out of their followers than those who offer safety and a good time. When it comes to the pinch, human beings are heroic." – George Orwell

I start each day by telling myself

“I start each day by telling myself what a positive influence I am on this world.” - Peter Daisyme 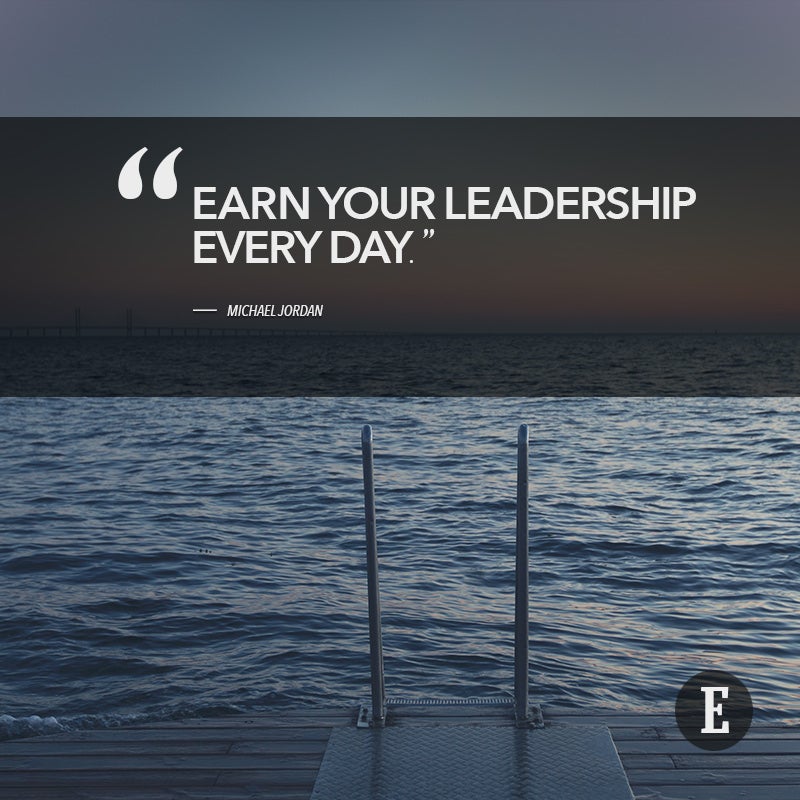 Before you are a leader

Leadership is lifting a person’s vision

“Leadership is lifting a person’s vision to high sights, the raising of a person’s performance to a higher standard, the building of a personality beyond its normal limitations.” - Peter Drucker

My job is not to be easy on people

"My job is not to be easy on people. My job is to take these great people we have and to push them and make them even better." - Steve Jobs

The led must not be compelled

"The led must not be compelled. They must be able to choose their own leader." – Albert Einstein 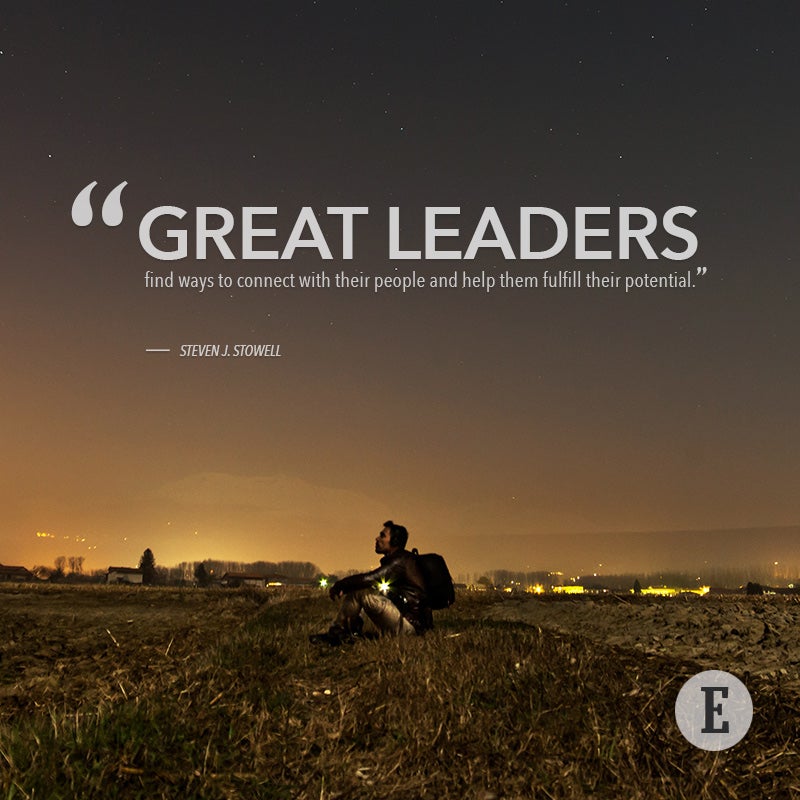 “Great leaders find ways to connect with their people and help them fulfill their potential.” - Steven J. Stowell

To have long-term success

"To have long-term success as a coach or in any position of leadership, you have to be obsessed in some way." - Pat Riley

If you think you are leading

"If you think you are leading and turn around to see no one following, then you are just taking a walk." – Benjamin Hooks

The challenge of leadership is to be strong

“The challenge of leadership is to be strong, but not rude; be kind, but not weak; be bold, but not bully; be thoughtful, but not lazy; be humble, but not timid; be proud, but not arrogant; have humor, but without folly.” - Jim Rohn

A man who wants to lead 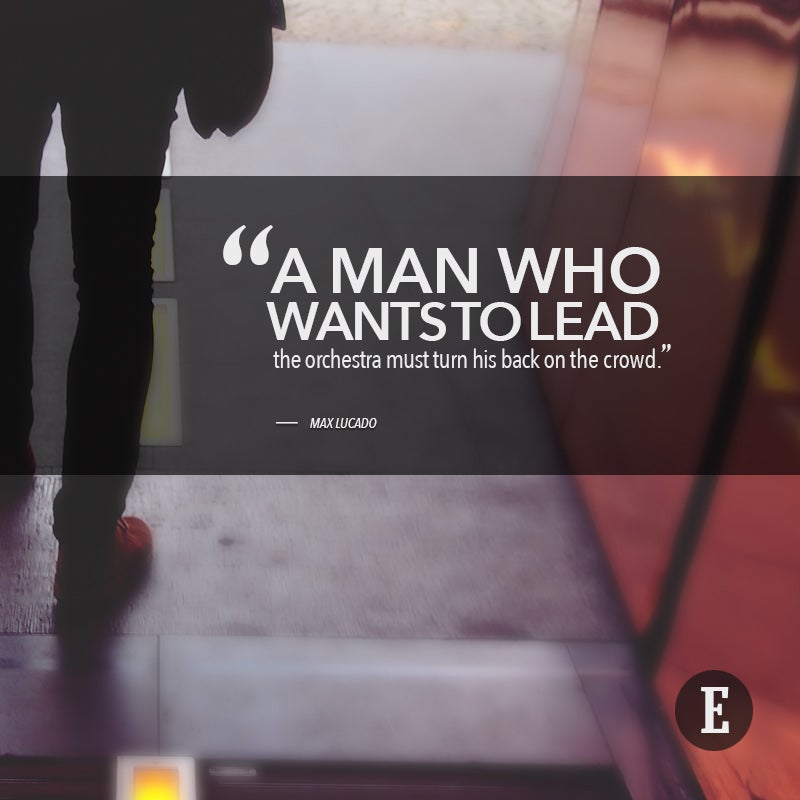 "A man who wants to lead the orchestra must turn his back on the crowd." - Max Lucado

To do great things is difficul

It is absolutely necessary...

"It is absolutely necessary...for me to have persons that can think for me, as well as execute orders." - George Washington

Leaders aren’t born, they are made

"Leaders aren’t born, they are made. And they are made just like anything else, through hard work." - Vince Lombardi

“A cowardly leader is the most dangerous of men.”  - Stephen King

A man always has two reasons

"A man always has two reasons for doing anything: a good reason and the real reason."- J.P. Morgan

Not the cry, but the flight 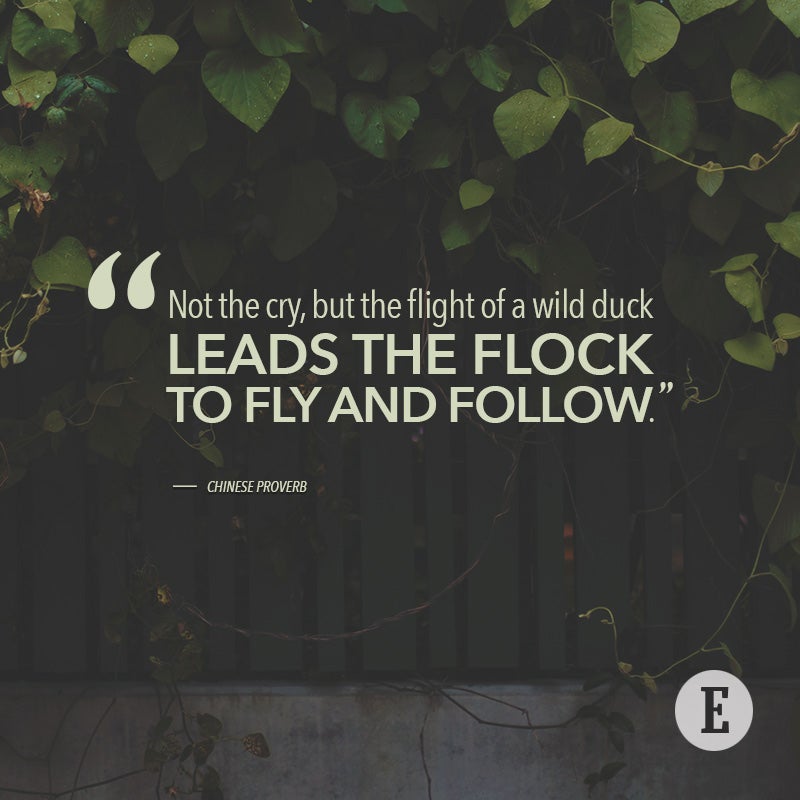 “Not the cry, but the flight of a wild duck, leads the flock to fly and follow.” - Chinese Proverb

The ultimate measure of a man

No man will make a great leader

“No man will make a great leader who wants to do it all himself, or to get all the credit for doing it.”  - Andrew Carnegie

Average leaders raise the bar on themselves

Those who try to lead 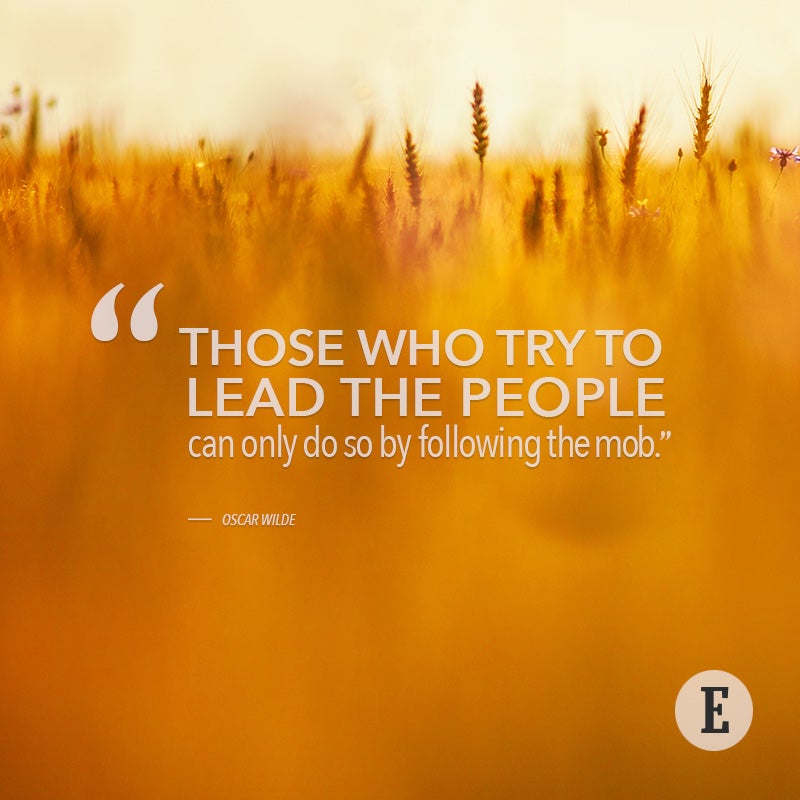 "Those who try to lead the people can only do so by following the mob." – Oscar Wilde

Outstanding leaders go out of their way

“Outstanding leaders go out of their way to boost the self-esteem of their personnel. If people believe in themselves, it’s amazing what they can accomplish.” - Sam Walton

Example is not the main thing

“Example is not the main thing in influencing others. It is the only thing.” -  Albert Schweitzer

If your actions create a legacy

“If your actions create a legacy that inspires others to dream more, learn more, do more and become more, then, you are an excellent leader.” - Dolly Parton “I am reminded how hollow the label of leadership sometimes is and how heroic followership can be.” - Warren Bennis “In this world a man must either be an anvil or hammer.” -  Henry W. Longfellow

“It is absurd that a man should rule others, who cannot rule himself. (Absurdum est ut alios regat, qui seipsum regere nescit.)” - Latin Proverb

The history of the world 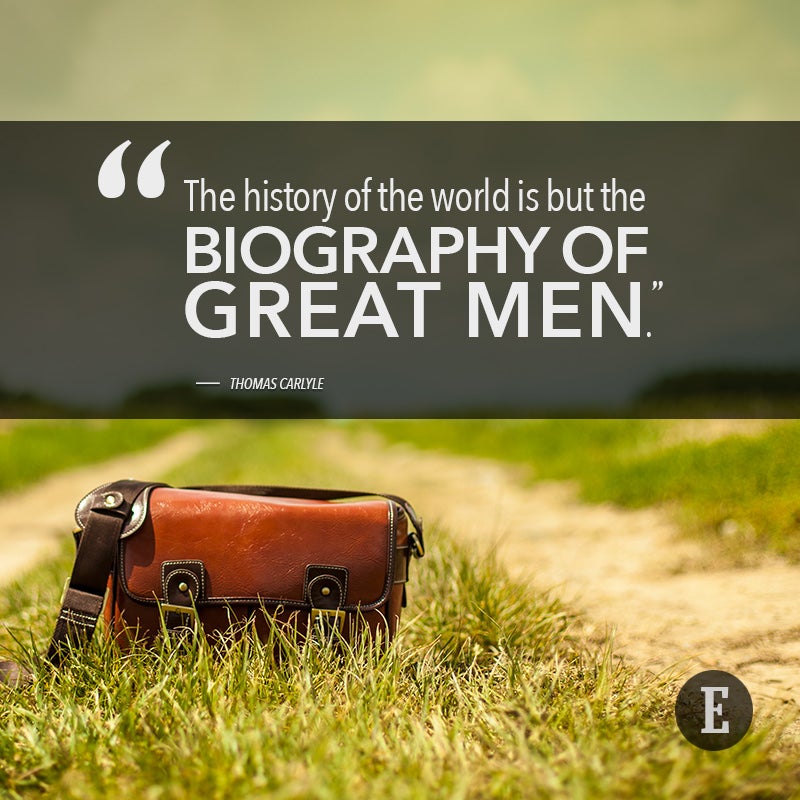 “The history of the world is but the biography of great men.” -  Thomas Carlyle

A ruler should be slow

“A ruler should be slow to punish and swift to reward.” - Ovid

You don’t have to

Rely on your own strength of body and soul

“Rely on your own strength of body and soul. Take for your star self-reliance, faith, honesty, and industry. Don't take too much advice — keep at the helm and steer your own ship, and remember that the great art of commanding is to take a fair share of the work. Fire above the mark you intend to hit. Energy, invincible determination with the right motive, are the levers that move the world.” - Noah Porter

I cannot give you the formula for success

He who has learned 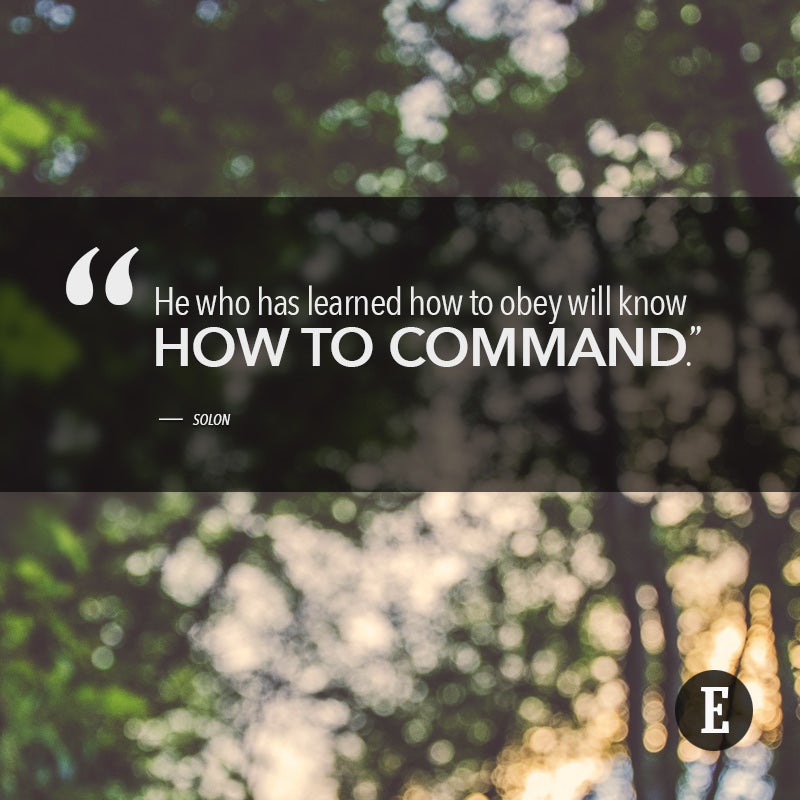 “He who has learned how to obey will know how to command.”  - Solon

If one is lucky

“If one is lucky, a solitary fantasy can totally transform one million realities.” - Maya Angelou

The best executive is the one who

“The best executive is the one who has sense enough to pick good men to do what he wants done, and self-restraint to keep from meddling with them while they do it.” - Theodore Roosevelt

“Screw it, let’s just do it.” - Richard Branson

Don't Let a Recession Ruin You. Here's How Your Business Can Thrive During Hard Times

Good Bosses Show Their Human Side. But What If the Boss Is Freaking Out?

Find Your Flow Through Deep Work and Unlock Your Superpower

iScanner Is a Digital Office on Your iPhone

Elon Musk Sets Record Straight on Potential Purchase of Professional Sports Team: 'They Were My Fave Team as a Kid'