A New Dawn for Solar

Namaste solar is harnessing the power of the sun--and politicians. 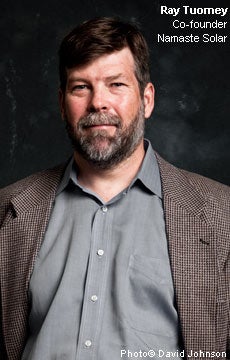 Blake Jones, 35, began his engineering career as an oilman. But after three years working for KBR Inc., a subsidiary of Haliburton, he had a change of heart. After relocating to Nepal, he quickly moved up the ranks at Lotus Energy, one of the most promising renewable energy companies in Asia. Three years later, after Colorado passed a sweeping energy bill that called for a massive investment in alternatives, he returned to the states and headed to Boulder in 2004 to start Namaste Solar with co-founder Ray Tuomey, 44. Today, the employee-owned company, with a mission statement that's more about altruism than the all-mighty dollar, is Colorado's leading installer of solar photovoltaic systems, with 700 installations to its credit--including units for the governor, a senator and a congressman.

The front range of the Rocky Mountains, with its steady winds and above-average sunshine, is expected to become one of the hubs of the new alternative energy grid, and Namaste is in an excellent position to capitalize. Already, the 155-person company has doubled its revenue every year of operation. It was impressive enough to merit Jones the honor of introducing President Obama last February, when he signed the Economic Recovery Plan.

"Today, the average citizen's awareness of global warming and energy policy has increased dramatically," Jones recently told the website The Daily Green. "There are multiple benefits to going solar, and it's becoming a very bipartisan issue, with people who are environmentalists right next to people who are concerned about fighting the war on terrorism."

Keep an eye on:Abound Solar: Abound Solar hit it big when it developed a new process for producing "thin film" solar panel modules. Watch as it becomes one of the first companies to meet the skyrocketing demand for solar panels.

A123Systems: This MIT spin-off has leveraged its expertise in nanoscale materials to become one of the world's leading suppliers of high power lithium-ion batteries, which are expected to become an integral part of hybrid and electric cars.

Ecotality: With plug-in electric out next year, the demand for fast-charging stations is a major emerging market. Ecotality's 440-volt fast-charge stations, which can rejuice a lead-acid battery in 10 to 15 minutes, are primed to fill the gap.

EEStor: EEStor's ceramic ultracapacitors will give batteries a run for their money. Charging in just 3 to 6 minutes, they're manufactured without hazardous chemicals and are slated to debut in Zenn electric cars in 2010.

Entegrity Wind Systems Inc.: This company, which manufactures wind turbines on Canada's Prince Edward Island, produces the most tested and durable ones in the business.

Greenline: Making biodiesel is one thing; making the equipment that makes biodiesel is a much tougher game. Greenline produces the cleanest small- to midsize waterless biodiesel refineries in the U.S., which has primed it for massive expansion.

SAGE Electrochromics Inc.: This glass company is the world leader in electrochromatics--that is, glass that turns from clear to tinted with the flip of a switch, saving big bucks on air conditioning. And it's already going international.

Veranda Solar: Veranda Solar, is marketing portable solar panels that can hang out of windows or clip to gutters. At $400 to $600 per system, it's serving a niche that "big solar" hasn't reached.