Chris Guillebeau and the $100 Startup

By Bryan Keplesky
March 13, 2012
Opinions expressed by Entrepreneur contributors are their own. 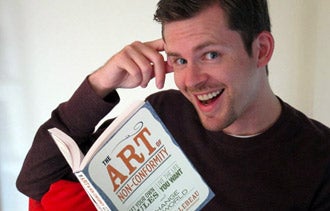 Chris Guillebeau, author of "The Art of Non-Conformity," is interested in freedom -- and in helping dissatisfied people who are seeking a change and don't know what the next step is in a limited job market. He poses the following question in his new book "The $100 Startup:" What if today was your last day of working for someone other than yourself? He previewed the book, which will publish in May, at SXSW Interactive in Austin, Texas.

Guillebeau says he hopes to inspire people to ask, "Do I have enough freedom?" and, just as important, "Am I creating freedom for someone else?"

To write the book, Guillebeau surveyed more than 1,500 entrepreneurs earning at least $50,000 for their business and wrote about 50 case studies. Half are from U.S. entrepreneurs. Each entrepreneur had to be generating revenue with a skill (or skills) that can be easily acquired by anyone. And, many of those profiled never considered themselves entrepreneurs before, had no strategy or even the intention of starting a business.

Guillebeau found that each of the companies had three things in common.

1. Each entrepreneur found a way to combine their passion with something that people would pay for. (He calls this "Passion & Usefulness.")

2. Each company gave people what they really want, not what they say they want.

3. Each company's product was somehow tied to making people happy. The more a product was related to happiness, the better.