By Cheryl Winokur Munk
June 7, 2012
Opinions expressed by Entrepreneur contributors are their own.

A decade ago when Beth Heller and Tami Quinn opened Pulling Down the Moon in Chicago, "fertility yoga" was little-known. Today, they operate four centers in Illinois and one in Rockville, Md., offering a variety of services to women trying to get pregnant.

"Never did we imagine that it would grow into a $1.3 million company," Quinn says. To generate interest in their yoga classes, Heller and Quinn initially sent out marketing materials to area fertility doctors. As the customer base grew, so did the company's holistic offerings, which now include acupuncture, nutritional counseling, Chinese herbal medicine and massages. 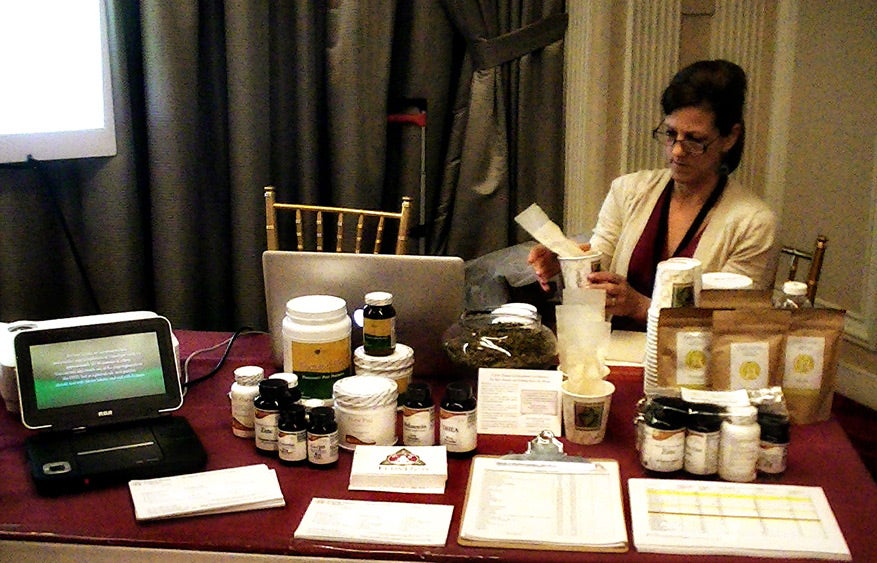 Heller sets up a booth at a medical conference in Chicago, where Pulling Down the Moon offered consulting services to doctors.

Pulling Down the Moon's story is an increasingly familiar one. As the number of fertility doctors has grown, so too has a cottage industry of yoga centers, acupuncturists, nutritionists, massage therapists, online sites and CD-makers that claim to increase a woman's chances of conceiving. While the scientific evidence is limited, there is growing belief among both doctors and patients that stress-reducing techniques, acupuncture and proper diet can increase the probability of pregnancy.

About 10% of U.S. women ages 15 to 44, or about 6.1 million, have difficulty getting or staying pregnant, according to Centers for Disease Control and Prevention. Many are so desperate to have a baby that they'll spend hundreds of thousands of dollars trying.

Erin Paas, a 35-year-old marketing executive in Chicago, has been on a quest to conceive for more than a year, using a combination of Eastern and Western treatments. A client of Pulling Down the Moon, Paas has tried acupuncture, massage, yoga, meditation, Chinese herbs and Reiki, a Japanese healing practice. She did three rounds of intrauterine insemination and recently started her first in-vitro fertilization cycle.

So far, insurance has covered the medical bills, but Paas has paid about $6,500 out of pocket for the alternative treatments. While she might reevaluate down the road, she says she's staying the course for now because she feels more mentally and physically prepared for the infertility procedures.

"There are good days and there are bad days, but I would not be able to do IVF if I had been where I was last year," she says. "For me right now, the benefit definitely outweighs the cost of it."

Pulling Down the Moon doesn't promise clients they will get pregnant, but does say its treatments may help patients with fertility issues. For example, it says acupuncture can be used to help regulate a woman's menstrual cycle, relieve stress, regulate hormones, improve the success rate of IVF and decrease the likelihood of miscarriage.

While some doctors believe practices like yoga and acupuncture are a waste of time and money, others encourage their patients to try holistic treatments along with traditional medicine. At Pulling Down the Moon, a new growth area is consulting with doctors who want to develop a holistic program for their own practices.

Business is also growing for Patti Safian, an acupuncturist in Montclair, N.J. She started out doing acupuncture for friends who were having trouble conceiving and shared office space with other businesses. But last year, she opened her own office to accommodate her growing practice. Now, she uses a combination of acupuncture and herbs, as well as nutrition counseling, yoga and massage with her infertile clients. She sees 35 to 40 women a week and recently hired a few more acupuncturists to meet customer demand.

As interest in holistic fertility treatments has grown, so too has the competition. For example, there are at least a dozen acupuncturists in Hoboken, N.J. -- a 1.28-square-mile town -- where Aradhna Behl has her practice. Even so, Behl says she continues to get referrals and almost 70 percent of her business involves women with fertility issues. "The whole Western fertility industry is kind of dehumanizing," she says. "Women come in not having any answers" to their infertility problems.

Some businesses are attracting the infertile, even without marketing directly to them. For example, Jackie Keller, whose Los Angeles company NurtiFit LLC offers meal programs and nutrition counseling for women of all ages, says the number of clients with fertility problems has increased by roughly 25 percent in the past two years. She doesn't specifically promote her services to women seeking to get pregnant, but believes people seek her out because proper nutrition is an important factor in a healthy pregnancy.

Keller finds many are frustrated with the process of trying to get pregnant. "I have a lot of conversations with people who are desperate for help in this area and will try anything if it has a reasonable chance of working -- or even if it doesn't have a reasonable chance," she says.

Women trying to conceive face the risk that some companies may take advantage of their desperation and vulnerability. Even so, the Better Business Bureau says it receives relatively few complaints about acupuncturists, masseuses, holistic healers and those offering similar services. But the agency doesn't handle complaints about medical issues, only a company's business operations, such as advertising or billing. So any complaint data would not include couples who tried to use such services to conceive and were unsuccessful, according to Katherine R. Hutt, a spokeswoman.

Because they are catering to such a vulnerable population, small businesses that work with fertility patients need to take steps to protect themselves against liability claims. Any false or misleading information in their marketing, for instance, could result in a lawsuit, says Melissa B. Brisman, an attorney in Montvale, N.J., who specializes in reproductive law. Holistic providers need to be careful what they promise, Brisman says. "If your uterus has a tear, no amount of acupuncture and yoga is going to help," she says.

Entrepreneurs should make sure they're covered by liability insurance and become familiar with the specific laws of the states in which they operate. Fertility doctors sometimes get sued when patients don't become pregnant, and acupuncturists, nutritionists and yoga teachers are equally at risk, Brisman says. "Pregnancy is such a sensitive area. Even if you are acting in a completely appropriate way, clients who don't become pregnant could become upset even if you don't do anything wrong."