In the first of a four-part series, a look at how the serial entrepreneur is betting on startups to revitalize Las Vegas with his $350 million Downtown Project.

While most people cringe at information overload, Tony Hsieh appears to welcome it. The Zappos CEO is known to have a penchant for research and a knack for using it in business experiments. He begins each one as if it will ultimately bring him closer to solving a theoretical jigsaw puzzle. And, if all goes as planned, his latest and largest experiment may do just that.

Just a few miles north of the Las Vegas Strip, a gambling mecca clustered with the largest U.S. casinos and hotels, Hsieh is leading a five-year, $350 million urban experiment to revitalize the city's downtown. That's where Zappos headquarters will be located this fall when it moves from Henderson, Nev., to the old City Hall building. Investing in the surrounding downtown area is in part a way to support the growth of Zappos.

Hsieh cites data showing that innovation and productivity tend to increase when cities get larger, whereas the opposite is more likely when companies grow. "We want to avoid that fate and create an interesting hybrid between corporation, community and city that's never really been done before at this scale," he says.

Entrepreneurs are watching the Downtown Project closely, as $50 million will be invested in tech startups and another $50 million in local small businesses, including a Shipping Container Park, an outdoor market where entrepreneurs will use converted shipping containers to test retail and restaurant concepts. Another $50 million will go toward education, including the creation of a community theater, dubbed Inspire Theater, to host lectures and other educational events. The remaining $200 million is earmarked for real estate.

Hsieh points to urban economist Edward Glaeser's Triumph of the City (Penguin Press, 2011), as a book that has guided the thinking behind the project. Glaeser, an economics professor at Harvard University, observed the Downtown Project in its early stages when Hsieh invited him to speak to Zappos employees last year. "Entrepreneurship is the lifeblood of urban reinvention, and it's certainly what the downtown project is all about," Glaeser says.

To be sure, any project of this magnitude is likely to have its share of challenges. Glaeser says it can be difficult to create a walkable downtown in a city where people are used to driving everywhere. It also remains to be seen whether the community can appeal to the "married and dull" crowd as much as the "single and hip" youth, he says.

While the city appears to embrace the project, Glaeser says there are no guarantees it will be free of government roadblocks in the future. "It always makes sense to be worried about the potential downside with government," he says. Spending millions to overhaul a city is certainly risky, but given Hsieh's track record at Zappos it appears to be "a planned risk, not a particularly outrageous one," Glaeser says.

With innovative and often contrarian approaches in business, Hsieh transformed Zappos into a billion-dollar brand lauded for its culture and sold it to Amazon Inc. in a 2009 deal valued at $1.2 billion. He still runs the company and his popular book Delivering Happiness (Business Plus, 2010), has served as a guide for many entrepreneurs looking to build a productive and happy team. Hsieh hopes his efforts to rebuild downtown Las Vegas, long in disrepair, will be just as transformative.

During a recent interview in downtown Las Vegas, Hsieh shared his biggest surprise, a valuable lesson learned and his criteria for the project's success. Edited interview excerpts follow. 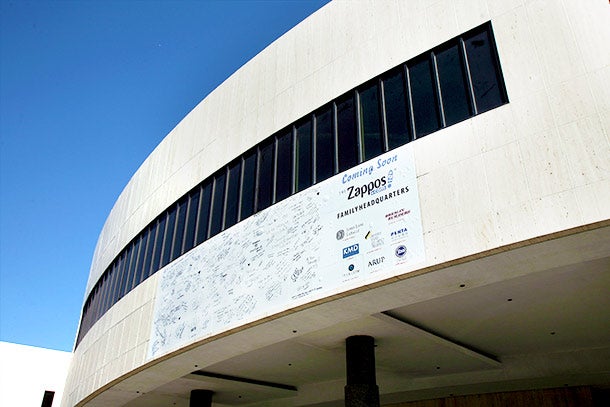 Entrepreneur: You like to experiment with ways to create "collisions," encounters where people randomly run into each other and share ideas. How are you doing this in downtown Las Vegas?

Tony Hsieh: With the design of our new corporate campus, we're shutting down the sky bridge that connects the garage to the building, so employees have to go out to the street and through the central plaza to get to work, so we'll get more collisions that way. Also, in designing the Shipping Container Park, we'll have everyone go through one entrance, but the exit is at the opposite end of the park; that's to get them to walk one extra block to where they parked.

Entrepreneur: What has been the biggest surprise so far?

Hsieh: Buildings take a lot longer to construct than I would have thought, even when it sounds simple, like the Shipping Container Park. In theory, the Container Park was supposed to be cheaper and faster, which was the original point of doing it. It turns out it's not faster because we're asking the city and state to do things they haven't really done before. And it's not cheaper. But we've found ways to work around delays. For example, while we're waiting for the Inspire Theater, we've been doing our speaker series and events out of construction trailers, and even there, sometimes 150 to 200 people show up.

Entrepreneur: What stands out as a major lesson you've learned, going from growing a company to overhauling a city?

Hsieh: Like for any startup, the most important thing is you need to say no to a lot of things and really focus. Downtown is much bigger than the Fremont East area that we're focusing on, but when we first started, there were potential projects in the Arts District, at Huntridge Theater and Symphony Park -- only about a mile away. We realized if we wanted to be involved in those, then we would lose focus and not do any of them well. So, we made an explicit decision if anything falls out of the borders of the Fremont East area, even if it's an amazing opportunity, we'll pass on it. Once Fremont East is happening, then we can expand into other areas.

Entrepreneur: In Triumph of the City, which has helped to guide the Downtown Project, education is noted as the most reliable predictor of urban growth. You have a slightly different and wider interpretation of that.

Hsieh: Our belief is that ongoing learning is probably the most predictable factor, and college campuses just happen to be probably the path of least resistance in most cities. What matters is learning, and there are other ways to learn beyond formalized education, like Skillshare [a community marketplace for classes that the project invested in], and the Downtown Speaker Series or people from different industries just sharing ideas and innovating. We want to help create a culture of open collaboration, and that's another way to view education.

Related Video: Skillshare and Changing the Way We Learn

Entrepreneur: Other cities are undoubtedly watching this to see how it unfolds. What do you think they can learn from it?

Hsieh: Hopefully, it will inspire them to believe this is possible for their community. When they see the popularity of the lectures and other educational events in the construction trailers, it might help some of them realize you don't need an expensive building to build community. If this can happen in Las Vegas of all places, the city that many might say was voted least likely to succeed in terms of community building and so on, there probably isn't any good excuse for any other city.

Entrepreneur: How will you ultimately measure the project's success?

Hsieh: When it becomes a truly walkable neighborhood where people don't feel like they need a car. When we have no involvement with most of the companies moving here, until after they're here. Right now, we tour people around, and there's a little bit of a recruiting aspect to it. When downtown Las Vegas becomes known as a place of entrepreneurial energy and inspiration, and it's seen as a replicable model for other cities and communities to reinvent or revitalize themselves. When the impact is beyond just Las Vegas.

Entrepreneur: What does the Downtown Project mean to you personally?

Hsieh: Everyone likes being around nice people who are creative and innovative, so it's an opportunity to create a higher concentration of that within a walkable distance. And it's cross-disciplinary, meaning there are different types of thinking involved in it, like being creative and analytical. I'm also the type of person who gets bored easily, and here you meet new people with new project ideas every day. I find it a really interesting puzzle to try and figure out.