For these entrepreneurs, going under was just the beginning.

By Michelle Goodman
December 8, 2009
Opinions expressed by Entrepreneur contributors are their own. 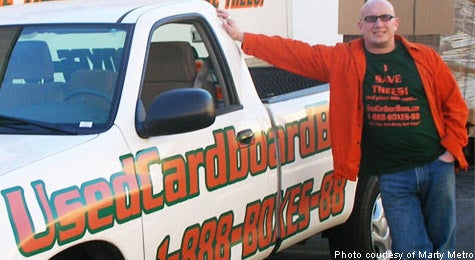 Only thing was, Metro couldn't figure out how to turn a profit.

"The sales weren't the problem," he explains. "It was the operational costs. We couldn't get the boxes, inventory them, store them and sell them in a way that actually made money."

Three years later, Metro's green business was still in the red and he was forced to shutter it. Saddled with $300,000 of personal debt, he found himself selling his office furniture on the sidewalk and back on the market for a day job.

While some would be discouraged, Metro doesn't consider his failed business a waste of time or money. The lessons learned, skills acquired and contacts made have since served him well. So well, in fact, that he raised enough venture capital to re-launch in 2006 as UsedCardboardBoxes.com--a web-based version of his original business.

Reputation Is Everything
Like Metro, you may not walk away from a venture with any cash in pocket. But that doesn't mean you'll leave empty-handed.
"What you build up when you start a company is a network of people--investors, vendors and suppliers," says Shikhar Ghosh, who teaches entrepreneurial management at Harvard Business Schooland has been starting and running high-tech, venture-backed companies for 25 years. "In the U.S. there's a huge willingness to back you again if you've been honest in your dealings with investors."

The next time you start a business, "You'll need graphics, you'll need an accountant and you'll need a lawyer," says Sharon Miller, CEO of Renaissance Entrepreneurship Center, a small business development organization in the San Francisco Bay Area. "Those are good relationships to maintain and sometimes really hard to develop."

All well and good, but won't having a business go belly up mar your reputation?

Not if you've done your best to make sound business decisions and treat investors, employees and customers with respect, Ghosh says. "Your track record stays with you. Not so much whether your business failed or succeeded, but how you deal with adversity. That reputation aspect becomes critical," he explains.

Metro will attest to that.

The Best Education Money Can't Buy
Other takeaways from a business that's gone bust: all that real-world market data and managerial experience that no MBA classroom can give you.

If, like many entrepreneurs, you learn that customers do not fancy your product or service the greatest innovation since the personal computer, you can tweak your offerings to meet their needs. In other words, Ghosh says, "You just got the most incredible market research."

"Do something with your 20/20 hindsight," Miller says. "Ask yourself, 'Where are the areas I could have planned better?'"
For Metro, planning better the second time around meant tackling the fact that boxes are bulky to store and expensive to ship--the initial reason his profits floundered.

In his business' latest incarnation, "We have nine distribution centers and we've become very focused on operations to move boxes locally rather than across the country," Metro says.

But improving on past business decisions isn't the only benefit of looking at a failed venture through the rear view mirror. So is pinpointing which tasks you excel in and which you're better off delegating, Ghosh says.

"It's important for entrepreneurs to recognize that they're rarely good at everything," he advises.

Julie Parrish of Portland, Ore.--on her fifth business in 14 years--concurs. Now CEO of CG Media, which publishes Hotcouponworld.com, a web community for cost-conscious shoppers, she focuses on "the nuts and bolts of how we make money"-- handling contracts, managing advertisers and overseeing finances--and leaves the people side-- managing the site's developers and moderators--to her business partner.

"When you've had multiple businesses, what you bring forward to the next one makes everything go smoother," Parrish says. "If I didn't already understand the accounting pitfalls, I wouldn't be able to make good decisions about how people get paid and when to go out and chase funding."

How Those Who Fail Bounce Back
So how do serial entrepreneurs pick themselves up and dust themselves off after a business flatlines?

"Any entrepreneur going into a venture should recognize that the probably of failure is well above 50 percent," Ghosh says. "Most successful entrepreneurs have failed before and after their success."

For that reason, he recommends, "You have to set some objectives beyond 'This thing's going to make me a lot of money.' You're trying to build up a network of people and resources and a series of experiences."

To remain buoyant, keeping your personal life and your professional life separate is a must, business veterans warn.

"I've seen a lot of entrepreneurs fall into the trap of using all the money they have just to keep the business running," Ghosh says. "Don't risk your family, and don't commit yourself to financial loss that will take you many years to recover from. If you can, do it with other people's money."

For Parrish, the separation of the personal and entrepreneurial is more a mindset.

"The company doesn't define you," says the serial entrepreneur, who has had two businesses fail. "Who you are defines you. I can take that anywhere--not because I'm Julie, CEO of CG Media, but because I'm Julie with all this business experience."

"Failing is not the end," he says. "Failing is just a speed bump. It's a lot more fun succeeding, but entrepreneurs don't just envision success. They love the process."