When the coffee giant opened a 'stealth' outlet in its own hometown, it was the espresso shot heard around the world.

By Jason Daley October 13, 2009
This story appears in the November 2009 issue of Entrepreneur. Subscribe » 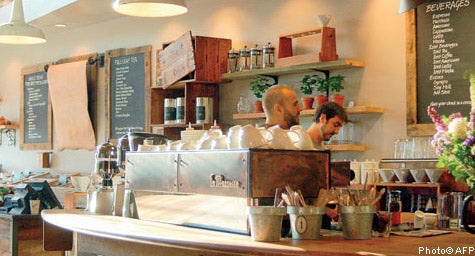 Last summer, when the butcher paper came off the windows at the former Starbucks in Seattle's Capitol Hill neighborhood, locals found a narrow little cafe called 15th Ave Coffee & Tea, serving espresso pulled from a manual La Marzocco machine by hipster baristas with a flair for latte art. Drip coffee is made cup by cup from small-batch-roasted beans brewed in an $11,000 ceramic-filtered Clover machine. The pastries come from the local Essential Baking Co. One wall is papered over with pages from Plato's dialogues, and the chairs were salvaged and refurbished from other cafes. The communal table is made from weathered ship timbers, and even has a notch where the mast used to poke through. Every morning, there's a "cupping," a tasting of some of its more exotic brews.

With so much to admire at 15th Ave, it's easy to miss the "Inspired by Starbucks" tagline stenciled on the front window--yep, the new cafe is still a Starbucks and it still serves coffee made from its ubiquitous beans (though there's more variety and some extra TLC at 15th Ave). In fact, the cafe is part of a three-store test in the Seattle area of a more "independent" Starbucks concept, and the 16,000-unit chain has hinted that it may be the vanguard of a larger rollout of "unbranded" cafes. A leaked corporate memo, the Seattle Post-Intelligencer reported, has outlined plans for the next location, also in Capitol Hill, to be called Roy Street Coffee and Tea.

So why would a company that has colonized most of the known world over the last two decades slough off its billion-dollar brand? It turns out that some chains and franchises have realized something many consumers have felt for years: Big isn't always beautiful. For a growing slice of the population, "Walmart," "Starbucks" and "chain" have become dirty words, while local, independent and unique have become core values. Now, many big chains are developing creative ways to capture a market that has rejected them, and franchises, which usually have local ownership, are starting to play up the neighborhood and community aspects of their stores.

Take for example the new Edition line of hotels by Marriott. When the first batch opens next year, each will have its own architecture and style, designed by Ian Schrager, whose hip, white-curtained lobbies defined the boutique hotel concept in the 1990s. Houston's, a casual restaurant group based in California, makes each outlet unique by varying the architecture and decor, and putting local foods on the menu. The Firkin group of pubs, found across the U.S. and Canada, gives each bar its own name and a different layout. "Some of our pubs are in basements, some are on rooftop patios," says Larry Isaacs, spokesman for the Ontario-based pubs. "If you went to our pub in Chicago, you wouldn't ever know there's one in Flint. We try to leverage the franchise model and keep the local feel."

Chains like these, along with 15th Ave Coffee, bring up bigger questions for small business and franchise owners--are chains completely anathema to the world of the local, indie and authentic? Can a business owner harness the advantages of economies of scale and still maintain a store that is an organic part of the community? Marko Grï¿½nhagen, a researcher at Eastern Illinois University who is studying entrepreneurial "pockets" within franchise systems, thinks a little independent spirit is a good thing for a chain.

"There's a common assumption that every aspect of a franchise is predetermined by a franchisor--the appearance and decor are typically standard," he says. "But in other areas, to a large extent franchisees have a lot of freedom in what they do. That freedom may be a source of competitive advantage, and a franchisor that allows you to do things on your own may make you more successful than other franchisees."

Starbucks is being coy about long-term plans for the 15th Ave concept and refused comment for this story. But it seems like the latest maneuver in the chain's battle to regain its soul from a legion of automatic espresso machines. Howard Schultz, who created the original and much-lauded Starbucks "coffee bar" concept in the 1980s, recently returned as the CEO. In short order, the company apologized for its poor customer "experience" and introduced the mild Pike's Place Roast to combat its "Charbucks" reputation. It launched a slate of neighborhood and eco-friendly designs for new stores. It even shut down more than 7,000 units in the U.S. one February evening in a grand gesture to retrain its baristas. It also reduced prices and slashed 18,000 jobs.

And now there's 15th Ave. This new, idealized Starbucks (maybe that explains the Plato on the wall?) has been the subject of intense speculation by industry watchers and critics. Peter Merholz, president of brand strategy and design firm Adaptive Path, says the company created a "stealth" brand to quietly steal the customer base from mom-and-pop cafes, which still control 57 percent of the market, instead of directly challenging low-cost corporate coffee rivals McDonald's and Dunkin' Donuts. Others, like marketing guru John Moore, suspect the new cafes are "learning labs" to help the company reboot its customer experience. John Gerzema of the advertising agency Young & Rubicam wonders if Starbucks is sandboxing a new back-end service similar to what Amazon.com provides to small online retailers: Independent coffee-shop owners could plug into Starbucks distribution network but still retain local credibility and control, and the 'Bucks could expand its business without adding retail locations.

Starbucks has neither confirmed nor denied that it is pursuing any of those paths. Bruce Milletto, CEO of Bellissimo Coffee InfoGroup and a leading industry watcher, thinks the company's motivation is more basic: Starbucks is returning to its roots as a comfortable "third place," a living space that goes beyond the home and the office. "People want to have 'their' coffee bar, and they want to have 'their' coffee," says Milletto, who remembers when Starbucks was a hip chain of four or five shops. "Starbucks has realized that's a niche they're no longer filling."

There's at least one franchise chain that has built its entire brand around that kind of localism and independence. The Great Harvest Bread Co., launched in 1976, is a $100 million- per-year brand with 220 stores in 42 states. Walk into any Great Harvest, however, and you'd think you were in an independent bakery. The franchisor requires its owner/bakers to display the company name and grind flour fresh daily--and that's it. The menu, decor, sourcing and other details are up to the franchisees, though the company does provide recipes and a model bakery for inspiration.

"I think there's a general evolution of franchises," says Great Harvest's CEO Mike Ferretti. "Before they reach critical mass, every store is a freedom franchise, and owners can do their own thing to survive. When the franchise reaches critical mass, that 25- or 50- or 100-store mark, then they start enforcing the rules."

Think of it as the "Green Awning" moment, when consistency and image become as important as products. In Great Harvest's case, that crackdown never took place--but it wasn't because of negligence. "In the mid-1990s, when we opened our 25th or 50th store, we said, 'This is cool! Let's stay unique,' " Ferretti says. "And that's the point where we separated from the pack. It was a conscious decision at that point to say we kind of like the funky individual neighborhood bakery thing."

Jeff Weissman, who has run his Great Harvest location in Washington's Lake Forest Park neighborhood for over 20 years, doesn't feel as if he's part of a corporate operation. "We're essentially a non-franchise," says Weissman, who moved to Seattle to open his Great Harvest after working in his family's industrial hardware and steel business in Montana. "This system allows us to make our own choices and reflect the area we live in and our own personality."

But the training that Great Harvest provided to get his shop up and running, as well as the close-knit network of franchisees who share information and product sources, has made the venture much easier. The company's corporate offices aren't totally hands-off either. As the prices of wheat and honey have skyrocketed, they've decided to start a collective buying system, though, of course, opting in is optional.

There are disadvantages to turning away from the conformity of traditional franchises--Weissman, who refuses to use bleached white flour, has had to deal with confused customers looking for white breads they've found in other Great Harvest locations. "A large number of customers understand us and know each store has individual differences," he says. "But an equal number don't understand."

That's the kind of problem Starbucks is just beginning to tangle with. For the company, whose 11,000 U.S. locations are corporate-owned or licensed outlets in grocery stores and airports, there's no franchisee to help navigate a store into that local sweet spot. And so, 10,999 of them have waltzed down the same streamlined road. "Once you have thousands and thousands of stores, it's difficult to have consumers look at you in the same way," Milletto says. "I think in coffee, the small independent will always win out if it's doing a fantastic job."

The Little Franchise on the Corner

The Little Franchise on the Corner
Starbucks may be toying with taking things local, but The Great Harvest Bread Co. and other chains have found ways to tailor themselves to a community. Here are four franchisors that have successfully bridged the local divide.

Dunn Brothers Coffee
This St. Paul, Minn.-based franchise is the ninth-largest coffee chain in the U.S., but most of its 92 locations can be mistaken for indie coffeehouses--beans are roasted daily in the store, local music and art are the featured decor, and owner/operators are encouraged to make their stores hubs of neighborhood activity.

Roosters Men's Grooming Center
With plush leather barber chairs, dark wood interiors and hot facial shaves, Roosters is trying to bring back the era of the men's barbershop. Each of Roosters 25 locations across the country has a unique waiting/lounging area, and each owner is encouraged to keep tabs on neighborhood gossip and repeat the big fish stories barbershops used to be known for.

Rock Bottom Brewery
Head to any two of this Colorado brew pub's 29 locations and you'll never find the exact same beer. Each brew master is empowered to ferment recipes that cater to local tastes and often use local ingredients and water sources, leading to dozens of microbrews. In many cities that lack independent craft breweries, Rock Bottom has become the preferred beer-snob hangout, and the chain's hopheads routinely take home top awards from the most influential beer fests.

Hamburger Mary's
This chain of nine restaurants was developed to fill a specific niche--to offer a family restaurant in gay neighborhoods. Each location has its own sense of style, from bright purple facades to more understated architecture. Franchisees are allowed to go wild with customizing decor, and they have a free hand to book local cabaret acts, Pride parties and even bingo nights.