Why Everyone Should Talk About Politics While Networking 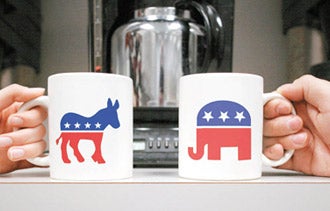 Yes, I believe everyone should talk about politics while networking . . . if they’d like their network to go up in flames, that is.

I admit that I chose the headline to get your attention. But to be clear, talking politics in the course of doing business -- or networking for business -- is definitely not a good idea.

Given the current highly divisive presidential election campaign, I thought it was a good time to write about politics and networking. Entrepreneurs often have very strong opinions about who should be their leader, and those opinions often bleed over into networking meetings.

Before I did my graduate work in organizational behavior, I received a bachelor’s degree in political science. As a student, I was very interested in politics -- and I still am. Even so, I do not discuss politics while I am out networking. Why? Your politics simply aren’t relevant to your professional life and your goal of building your business. A political discussion in the context of networking is distracting, and even worse, it can be divisive and detrimental to team building.

If you want to build a powerful personal network for business, it is all about collaboration and cooperation. But I have seen political discussions turn many networking groups into a hotbed of anger, anxiety, resentment and conflict -- clearly not a good environment for developing a healthy business network.

Related: A Small Talk Survival Guide for the Schmooze-Averse

When I bring this subject up with other people in business, some say it’s their right to discuss politics, religion or anything else they want when they network. I completely agree, but just because it’s someone’s right doesn’t mean it’s a good idea.

I understand that there are political and religious issues about which we have strong opinions -- I certainly have some -- but you risk damaging your business relationships by bringing them into the conversation.

My business operates in many countries covering almost every religion and every political system. But we wouldn’t be effective if we focused on anything other than our mission. Many of our clients have contentious political and religious positions, but when they are working with our company, they focus on their mission of relationships and referrals.

I think it’s important to understand the difference between discussing politics and religion in a networking environment and in other contexts, such as personal websites. For example, a client of mine recently got upset with me because a well-known author contributed a piece to my company’s newsletter.  The article was on-topic and strictly business. But a link was included to his personal website, which mentioned religion. Despite the fact that the article was great, the reaction from the client and some other people was negative because of the link.

Related: When It Comes to Successful Networking, Everyone Wants to Get Along

Still, if I had to do it all over again, I would do the same thing. His point of view about religion was a personal view expressed on his personal website, and for the record, was not something that would remotely be considered hateful or vile.

We can’t control what people think or say on websites or in their personal lives.  We can, however, control what we do inside our own organizations. If you want to stay on point about your business mission, stay off the topics of religion and politics in networking and other work-related meetings.