By Robert Frank June 18, 2013
This story originally appeared on CNBC

The creation myth of American wealth is almost always rooted in the entrepreneur.

It's the two kids who start a computer company in their garage or dorm room. Or the former standup comic who creates form-shaping undergarments, or the South African immigrant who creates a new electric car and private space program.

But despite the high-profile examples, America may actually be falling behind the rest of the world when it comes to creating entrepreneurial wealth. A new study from Barclays, "Origins and Legacy: the Changing Order of Wealth Creation," finds developing countries now lead the U.S. when comes to wealth creation by entrepreneurs.

Worldwide, 40 percent of millionaires (which is defined as those with investable assets of $1.5 million or more) cited a "business sale or profit" from their business as their source of wealth. Only a quarter of the millionaires cited inheritance as their wealth source.

In the U.S., only 21 percent of millionaires cited business sale or profit as their source of wealth. A much larger percentage cited saved earnings or personal investments as their sources of wealth. 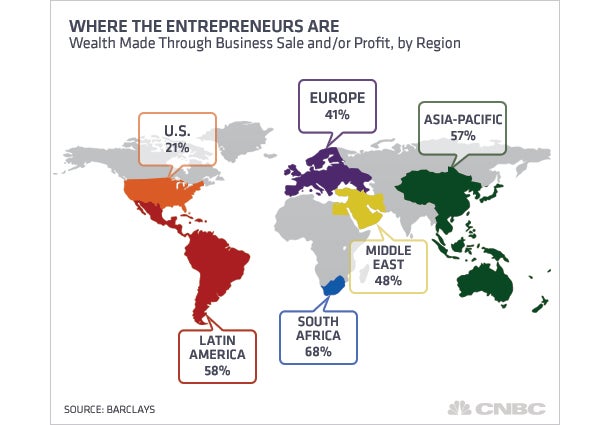 In the Asia-Pacific region, 57 percent cited business sale or profit as a source of wealth -- far more than in the U.S. South Africa (68 percent) and Latin America (58 percent) were also higher.

So is America losing its entrepreneurial mojo? There is some evidence that entrepreneurial activity is flagging. The latest data from the Kauffman Foundation found that there were 514,000 new business owners a month in 2012, down from 543,000 in 2011. The 2012 numbers marked the lowest in five years.

A report from the Hudson Institute found that brand-new companies added 2.34 million jobs in 2010 compared with an average of about 3 million a year dating back to 1977.

But the Barclays report said another difference between the U.S. and other countries could also be one of basic wealth cycles. Wealth in developing countries is newer, and therefore there is more wealth from freshly minted companies than from savings or investments.

"These [developing] markets have a much shorter history of widespread wealth creation and many of the high-net-worth individuals in these markets are first generation wealthy," the report said.

Entrepreneurs were also more likely to increase their fortunes during the recession compared with those with inherited wealth or those who made their money from investments and savings.

They are also more prone to taking risks, given that risk-taking is key to entrepreneurial wealth. As a result, their fortunes are more volatile than the wealth made from savings and earnings.

"Entrepreneurs need to embrace volatility and recognize that fortunes can be lost as quickly as they were made," the report said.

Robert Frank is an award-winning journalist, best-selling author and leading journalistic authority on the American wealthy. He joined CNBC in May 2012 as a reporter and editor for the news organization.

Prior to joining CNBC, Frank was with The Wall Street Journal for 18 years, serving as a foreign correspondent in London and Singapore, and later covering Wall Street and corporate scandals. For eight years, he was the paper's Wealth Reporter, covering the lives, culture and economy of the new rich.