SXSW is a massive event scattered over what seems like a kerbillion venues, at least to me. It’s also a circus of marketing, with companies taking over full restaurants, offices and other buildings to compete for visibility among 72,000 registered attendees.

To stand out, the clever firms looked beyond the usual branded pens, T-shirts and stress ball giveaways to solve attendees’ problems. These marketing solutions offer lessons and inspiration for anyone looking to make an impression at any large event.

1. Survival kits. People talk about surviving SXSW as if it were a war. It isn’t, but basic nourishment and equipment were essential as we stomped to and from booths, panels and other events. Several lounges created homes-away-from home for techies needing to work and take meetings between sessions. All offered artisan coffees and fancy energy bars, but others had kits on hand with supplies such as aspirin, hairbands, mints and even umbrellas on the rainy days. Most weren't branded items, just things that might be useful and that would make people think well of the company doling them out. 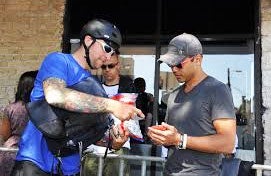 2. Power on. At SXSW, you can never charge your phone enough and finding an outlet can be more consuming than finding food and water (My own first day at the conference, I’d somehow forgotten to eat. While I found myself faint, I realized later my phone was never less than 80 percent charged). For those with Samsung phones, just tweeting #PowerOn and your location would lure a bike messenger who would pedal over with a freshly charged new battery. I watched a few of these messengers exchange old batteries for new ones and the recipients were always stunned by the simplicity. 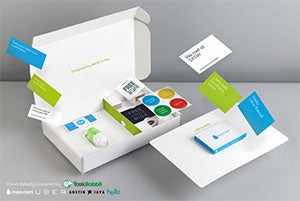 3. Give me your card. Remember how the business card was dead? That mobile had taken over and that tiny squares of cardstock were obsolete? That is a lie, or at least an exaggeration; I’ve never passed out so many business cards as I have at SXSW and I've restocked several times. If I’d actually run through the entire box I’d brought, I could have ordered new ones from the nice folks at Moo, a business card printing company. During the conference, Moo partnered with TaskRabbit, so business card orders over $30 would then be delivered by hand, at whatever time and location was convenient. They’d even come with this fun survival kit. Who can ask for more? 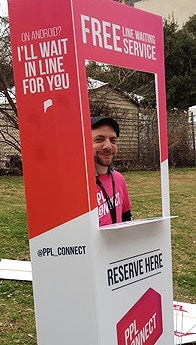 4. Wait for me? Lines can be notoriously long for panels, parties and even some of the more famous restaurants (Franklin Barbecue, anyone?). PPLConnect, an app company that links smartphones to computers and other mobile devices, wanted to entice people to download its app. As an incentive, the company had 40 people on standby to wait in SXSW’s many lines for them.

5. The nice lady did my hair. Cottonelle offered a Refresh Lounge with the requisite SXSW DJ and open bar but the space added an important rejuvenating extra: Free massages, makeup touch ups and hair blowouts. I sat to have my hair curled and appreciated the pampering as much as the chance to sit and cool my heels. I did so with a Cottonelle pillow on my lap – which I’m sure was part of the plan.