Every management program will teach you that you can't go wrong trying to boost morale and build culture through team-building exercises. We, of course, write about that in the abstract all the time.

So, I figured I'd try it myself.

I just completed a little experiment on my staff here at Entrepreneur. Nothing so bad as electric shock or toying with people's emotions on Facebook.

Rather, I wanted them to build a Christmas tree out of books.

We get sent hundreds of business books a year, all in the hope that someone here reads one and decides to write about it. With apologies to authors (and the PR reps they are paying), most never get opened. The most authors can hope for is that we like a dust jacket and decide it fits aesthetically on our shelves. A $100 bill and the formula for Pepsi could be tucked inside the books on my shelf and I would never know it.

So, they pile up, create clutter and sit dusty and unloved. It's always seemed a bit sad that trees died in vain to create books that sit in our Midtown offices, which is as close as I'll ever get to waxing environmental.

Then came Christmas season, which, as every New Yorker knows, begins when you can't walk a block without hearing the infernal clanging of a Salvation Army bell. Suitably in the mood, I wondered, what if we could make sure all those poor noble oaks didn't die in vain to create books no one reads? What if we actually created a tree with these spawn of dead trees, and made it festive to boot? Circle of Life, and all that.

So the editorial staff of Entrepreneur in New York was given a task: Take as many books as you need and build our office a Christmas tree. Make it festive. Make it look real. Make us proud. 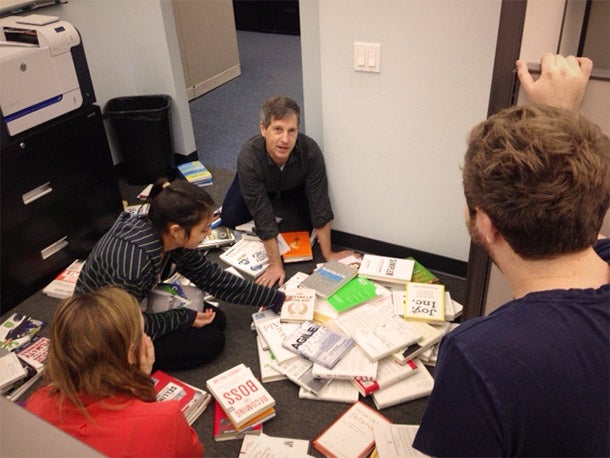 You may think I'm out of my gourd and that this was a monumental waste of time. You're spot on and irretrievably wrong, respectively.

In fact, it turned out to be a fantastic way to learn about my own team and give me ideas for the coming year.

So, what did I learn? Seven things:

1. They have amazing analytical skills.

This wasn't so much an art project as a scientific experiment. When you build something out of so many parts, you have to have a strategy. Before they set a single hardcover on the floor, the reporters made a plan. They decided how wide the base needed to be. They separated hardcover from soft. They stacked books based on size, so they had easy access to materials.

Related: Tim Cook Is Gay. But As Apple's CEO, That Isn't His Biggest Revelation.

That, my friends, is geometry and physics and architecture. I had a bias against them, given that most followed a humanities path in college, that the science and planning behind a project like this would discourage them. Rather, they tackled that part with ease. My bad.

Journalism is a creative function. In the end, we are more mad artist than mad scientist, but we express our art through wordcraft and storytelling. I was impressed by how aesthetics played a role in the staff's thinking. Once all the books were organized, they re-arranged them based on color, so that each layer had its own palette. It would have been easy to simply stack based on size, but they added the extra step of ensuring that each layer was pleasing to the eye. There was a visual theme, as a result – something that took me by surprise.

3. They are sensitive to one another.

You never want to alienate anyone, and we try to be an inclusive and diverse workplace. Any religious holiday runs the risk of doing that, and, no matter how secular it has become, you can't spell Christmas without Christ. As a result, the team tackled religious issues head-on. The base of the tree (which is, I would note from a theological perspective, an entirely pagan tradition) was made up of eight large books, representing the eight nights of Hannukah. The star on top was set in the base of a candle shaped like a Star of David. Any project like this has the risk of making people uneasy – and we live in a world where some people find offense in everything you do – but there was a real, sensitive discussion and no one was offended. 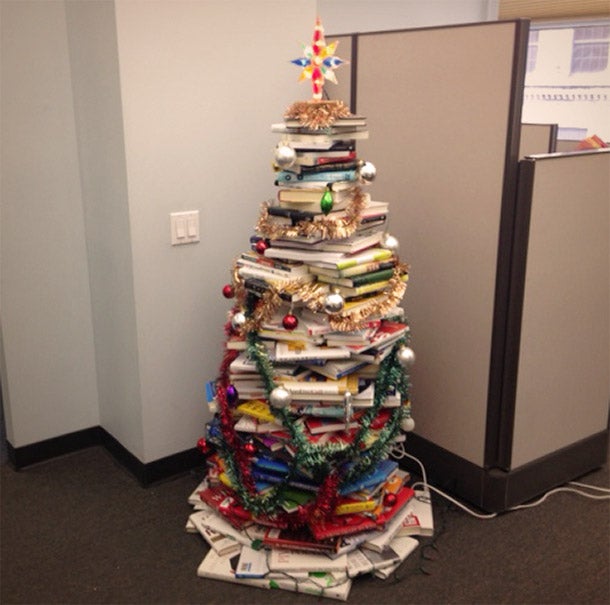 One of the biggest complaints with any exercise during the work day is that the work itself doesn't get done. I monitored productivity very closely. There was no drop in story or editing output. Rather, we accomplished more in the time the tree was being constructed than we typically do. Also, I noticed that people worked in shifts. When one had to interview sources, another would step in. Work stopped for a time when everyone had their day jobs to attend to, and then building resumed.

5. They take every task seriously.

Asking people to build a tree out of books is one of those requests that less awesome employees might simply address with a, “Sod off!” Not these folks. Let me tell you how seriously: At one point, they found a small, artificial Christmas tree, fully decorated, stowed away in a closet. Halfway up the base of the book tree, they channeled their inner Dr. Frankensteins (wrong holiday, I know) to see if attaching the fake plastic tree to the temple of books would look good. Many liked it. I didn't. I viewed that as cutting corners, and told them to make the tree solely out of books. They viewed their approach as a sign of their creativity, and – get this – actually got angry that I didn't recognize that. Those kinds of issues don't arise unless you take your work very, very seriously. That bodes well for you, dear readers.

It goes without saying that team-building exercises are designed to see how well teams work together. This is tougher with journalists. We are cranky, opinionated, and rather solitary. Shared bylines make for less usable clips in our next job interview. So their are a lot of lone wolfs out there. Not here. Here, I found, we have a wolf pack. Anyone who has ever dozed off watching the Discovery Channel knows there are few things more powerful in nature. That's why our competitors are so nervous all the time. They can't come close to matching our approach to the kill.

7. I don't appreciate them enough.

I have managed newsrooms and businesses, large and small. Each had its own character, and my leadership failure has always been in not fully understanding and appreciating the talents of all the people around me. I was aware of that personal shortcoming in watching them at work. Yes, I hired most of them, and I've tried to mentor them in a way that keeps them out of the bars and prison (with uneven success). But I never felt I really knew many of them until I saw them approach a task I had never hired them to do. No performance-review process could have taught me that, and it adds a happy surprise to the list of those items for which I am thankful this holiday.

Here's How to Have the Most Powerful DEI Conversations

Your Business Needs Gen Z and Millennial Perspectives to Get Ahead