Thanks to Crowdfunding, This Food Startup Has a Growing Fanbase to Help Female Farmers Abroad

By Amanda Nagai December 23, 2014
Opinions expressed by Entrepreneur contributors are their own.

Phrases like “food startup with a social mission,” “a 20-something female CEO only a few years out of the Peace Corps” or “supplied by women farmers in West Africa” are likely to land your business plan in a traditional venture capitalist’s polite-rejection pile. 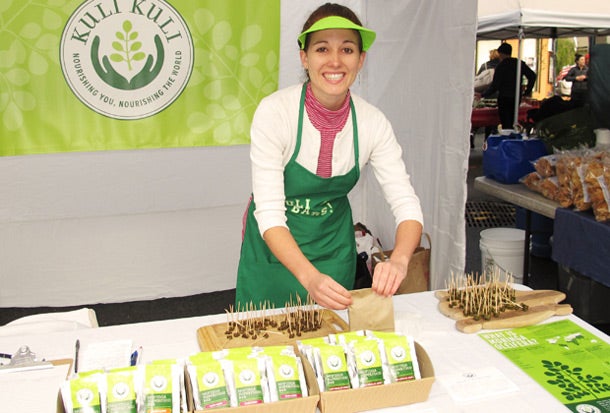 But the same factors that initially turned off many VCs resonated with crowdfunders who were drawn to a compelling story about a line of foods packed with moringa oleifera, a so-called superfood that can help fight hunger. The company sources its moringa powder from women-owned co-ops in countries like Ghana and Niger.

Lisa Curtis, Kuli Kuli’s founder and CEO, is trying to turn around moringa’s stigma as a “poor person’s food,” even in parts of West Africa that are prone to malnutrition. “Moringa is one of the only plants that grows during West Africa’s lean ‘hunger season,’” she says. “It flourishes with little water and in harsh, hot climates -- and is packed full of many of the vitamins, protein and minerals necessary for health.”

Kuli Kuli Moringa Superfood Bars are sold in more than 100 stores in northern California and the Pacific Northwest.

In the end, Kuli Kuli’s crowdfunding success attracted a number of prominent VC investors. Brad Feld, founder of the Foundry Group and a founder of TechStars, the technology startup accelerator, helped Kuli Kuli meet its crowdfunding target after Curtis sent him some moringa bars and powder.

Curtis, who had started Kuli Kuli with $50,000 raised in an earlier crowdfunding campaign on Indiegogo, courted Feld after reading his blog posts about food startups and Africa.

Feld, a health-conscious marathoner, said in a statement that Kuli Kuli caught his eye with its “impressive ability to build a movement around their business, as evidenced by their many crowdfunding successes.”

Food startups are a hot investment category, with venture capitalists investing $350 million in 2012, up from $50 million in 2008. Still, Curtis says she had earlier found it hard to be taken seriously by what she called “sharks” in Silicon Valley’s tech-oriented venture capital community.

In contrast, Rob LeClerc, AgFunder’s founder and CEO, said Kuli Kuli showed marketing savvy and ability to build a mission-driven brand that resonates with consumers. He liked Kuli Kuli’s early market penetration (its moringa snack bars are available in local Whole Foods markets and elsewhere) and the opportunity to give investors exposure to women’s co-ops in Niger and Ghana. Kuli Kuli was the second venture to be showcased on AgFunder.

Curtis puts Kuli Kuli’s social mission front and center. It pays above market wages, and partners with local organizations to boost moringa consumption and nutrition education in Niger and Ghana. The company never buys more than 60 percent of the moringa crop from any one producer.

“We are very committed to using the U.S. market as a catalyst for nutritional help abroad,” Curtis said. With support from the crowd, she can pursue that mission -- with or without the venture capitalists.

Financial
Kuli Kuli Moringa Superfood Bars are sold in more than 100 stores in northern California and the Pacific Northwest, including Whole Foods and Krogers -- Fred Meyers.

Social
Kuli Kuli sources its moringa powder from women-owned co-ops in West Africa, pays above market wages, and partners with local organizations to boost moringa consumption and nutrition education in Niger and Ghana.

Based in San Francisco, Amanda Nagai has served as an analyst and communications specialist for several government agencies. She has a particular interest in impact investment in food production and distribution.