By Jessica Pothering
December 16, 2014
Opinions expressed by Entrepreneur contributors are their own.

Making the investment case for bringing healthy food to low-income communities was none other than the First Lady. And inner-city grocery businesses and their customers are benefitting in a big way.

Michelle Obama announced the California FreshWorks fund in 2011, highlighting the need for financing inner-city grocery markets in order to bring affordable, healthy options to "food deserts" -- urban areas where it can be difficult to acquire find fresh food and produce. With transportation hurdles and higher prices for fresh food, these low-income areas not coincidentally have higher rates of obesity, diabetes and other diet-related health issues.

Within months of Mrs. Obama's endorsement, the FreshWorks fund had raised $220 million in capital and is now up to $272 million -- well above its initial target. 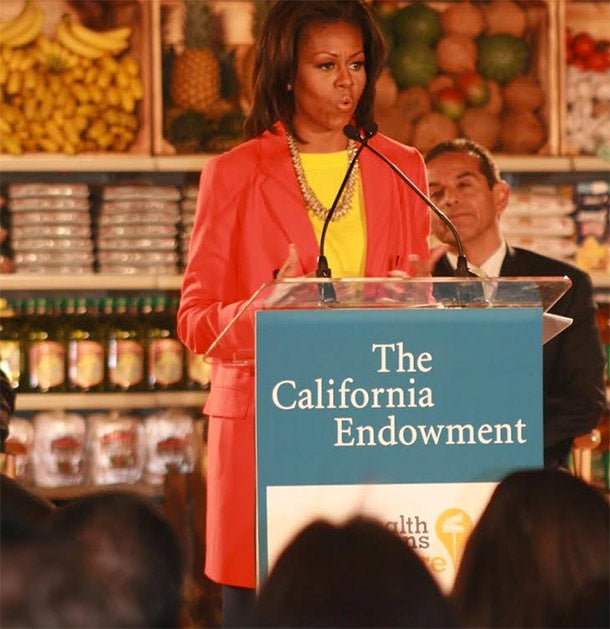 The challenge of making the investment strategy work fell to consulting firm Emerging Markets Inc. and Capital Impact Partners, a nonprofit spinoff of the National Cooperative Bank. In the lingo of finance, Capital Impact Partners is a "CDFI," or community development finance institution. With their 30-year history, CDFIs are the original impact investors, serving as lenders, financial intermediaries and technical advisors in "risky" areas to prepare the ground for mainstream capital. Capital Impact Partners is among the largest of the roughly 1,000 CDFI's in the U.S., having invested $1.8 billion in senior care, affordable housing, education and public nutrition projects in distressed and low-income communities across the country.

When it came to inner-city groceries, finding borrowers was in many ways harder than finding lenders. "Fewer supermarket businesses are willing to enter [low-income] markets due to misconceptions about crime, site availability and lack of demand," explained Veronica Saldaña, the fund's business development manager.

The impact of grocery stores goes beyond healthy foods. Supermarkets are big job creators, requiring about 25 employees for every 10,000 square feet of space. The opening of a 43,000 square foot Northgate Gonzalez supermarket in San Diego's City Heights area, an early FreshWorks investment, created 122 new jobs, for example. Opening a new grocery also boosts surrounding home values by about 5 percent, according to a survey in Pennsylvania. FreshWorks partners aim to fund 50-60 California grocery businesses by 2015.

The FreshWorks fund is able to lessen some of the perceived risk by leveraging grants and tax credits, and by spreading risk across a tiered debt structure. Specifically, grants from the California Endowment, JP Morgan and the federal Healthy Food Financing Initiative created a $7.5 million loan loss reserve, which protects senior lenders in FreshWork's debt facility.

That includes $125 million of term debt capital, $100 of which was committed from large private investors including JP Morgan, Citibank, Morgan Stanley, Bank of America, Charles Schwab and Met Life. The other $25 million is subordinated debt from The California Endowment, the Calvert Foundation, Capital Impact Partners and others.

Enabling a variety of investment plans to suit investors' varied risk profiles has allowed the FreshWorks Fund to catalyze projects that would not likely have gotten off the ground otherwise. Tapping into tax credit allocations through the New Market Tax Credits scheme, which offers investors tax credits for investing in CDFIs, generated more than $65 million in leveraged debt from TCE and Capital Impact and $60 million of tax credit equity from JP Morgan and US Bank.

A $13 million "innovation fund" financed by the Kellogg Foundation, TCE, HFFI, Kaiser Permanente and others lets the fund test new ideas, such as mobile produce trucks.

The Calvert Foundation established a vehicle for retail investors, with a micro-investment note to which individuals can commit as little as $20. To date, over 1,000 individuals have invested, with the average commitment being $700.

The FreshWorks fund helped finance six projects in the fund's first year and a total of 22 to date. With the FreshWorks fund, local and regional grocery store operators can borrow up to 90 percent of a new facility's costs. In contrast, traditional lenders might require a down payment of 40 percent or more for a large retail loan.

Three years after the First Lady kicked it off, Saldaña says, the FreshWorks fund has improved healthy food access to over 2.3 million people.

Financial
The California FreshWorks fund has raised more than $270 million, well over its original $200 million goal.

Social
The FreshWorks Fund has financed 22 food projects, impacting more than 2.3 million people, and aims to fund a total of 50 to 60 new grocery businesses by 2015.

One of a series of impact profiles produced in conjunction with the Case Foundation's new publication, "A Short Guide to Impact Investing."