Rebecca Minkoff adores the candied peanut- and popcorn-topped salted caramel sundae at ABC Kitchen in New York City. Indulging in the decadent gourmet confection is the sweetest part of her vision for a picture perfect day in the Big Apple. Other can’t-miss experiences for Minkoff in the city that never sleeps are strolling along the Highline, biking across Central Park and biting into a hot slice at Joe’s Pizza.

We don’t know these things because we asked her. We know them because the celebrity fashion designer shared them with entrepreneur Ruzwana Bashir, who then shared them on the sleek “Tastemakers Perfect Days” section of her travel activity planning and booking website, simply called Peek.

Related: How One Startup Is Changing the Vacation Tour Business

Bashir, 32, formerly a Fulbright scholar at Harvard Business School and once an analyst at Goldman Sachs, didn’t just persuade Minkoff to reveal her favorite travel picks on Peek (and on its companion iOS app). She convinced dozens of other famous (and semi-famous) people to do the same -- about 91 of them in all. And Bashir says she did it without offering them a dime. It’s worth noting, however, that a handful of the glitterati sharing their personalized travel recommendations on her and co-founder Oskar Breuning’s site also invest in it, Twitter co-founder Jack Dorsey among them. In total, the company has raised $6.9 million in funding since its founding in 2012, according to Crunchbase.

“We offer really cool experiences that people can book and buy,” Bashir tells Entrepreneur, “so we thought it would be fun to also uncover really great, local tastemaker picks that provide really unique and authentic perspectives on what they love to do in their favorite cities, like a really great hike, a perfect sunset spot, or a wonderful restaurant or a shack hidden away that you wouldn’t know about.”

Here are Bashir’s tips for how to persuade celebrities -- and other notable people of interest to your demographic -- to share content on your website, minus monetary incentive:

1. Make it almost too easy for them to work with you.

Whenever you ask anyone to do anything for your business, especially an incredibly busy celebrity, Bashir says it’s critical to make it as fast and easy as possible for them to contribute whatever it is you want from them.

“We came up with a very short list of questions that were really simple and easy for people to answer,” says Bashir. “All they had to do was answer them and we did the rest, including uploading their input on our website and promoting. It wasn’t a big ask.”

Related: How to Leverage a Celebrity Like Giuliana Rancic to Build a Business

2. Be persistent, but don’t stalk.

There’s a fine line between reaching out enough and too much. And then there’s stalking, which is unacceptable, obviously.

“You have to be tremendously persistent and break down all these barriers...because contributing content, doing something for you, isn’t necessarily the top priority in a tastemaker’s day,” Bashir says. “So you have to remind them with multiple emails, but not too many. If somebody respectfully declines, perhaps because you’re not offering compensation, that’s okay. No need to badger, just as you wouldn’t with anyone else you’re interacting with. They’re normal people, too, and the same social norms apply.”

3. Let them know others like them are on board (if they are).

Rather than attracting only one “dream contributor,” Bashir felt it would be a smart move to feature content from a wide selection of tastemakers.

First, it would showcase a diverse sampling of one-of-a-kind travel recommendations that would appeal to a large audience. “Wolfgang Puck’s lens on Los Angeles was different to Diane von Furstenberg’s, and hers is different to Steve Aoki’s, and we wanted to offer value to all types of travelers and fans.”

Second, it would make it more attractive for additional celebs to contribute. The more, the merrier. “The idea is to get lots of tastemakers excited and interested,” she says. “Once we had a handful involved, others followed. For example, Suze Orman and Nate Berkus came on board after we’d had Tory Burch and Adrian Grenier share their perfect days.”

Just as you should when pitching anyone, famous or not, Bashir says it’s important to share your enthusiasm for your website or product or service -- particularly how your business genuinely improves people’s lives -- when appealing to famous potential contributors. Tell them how it can help extend their own brand. Will you link to their website? Will you help them better reach their audience?

Bashir gives the example of Cynthia Rowley, a designer with whom she had no prior connection. “We reached out to her and expressed to her why we’re so passionate about what we’re doing and we were very clear about why we’d like her to give us her thoughts on a city that she loves,” says Bashir. “She got excited about what we’re doing and the problem we’re solving -- making memories for people through meaningful experiences, not things and the accumulation of more stuff. It resonated with her and she felt it aligned with what she’s about, so she wanted to be a part of it.” 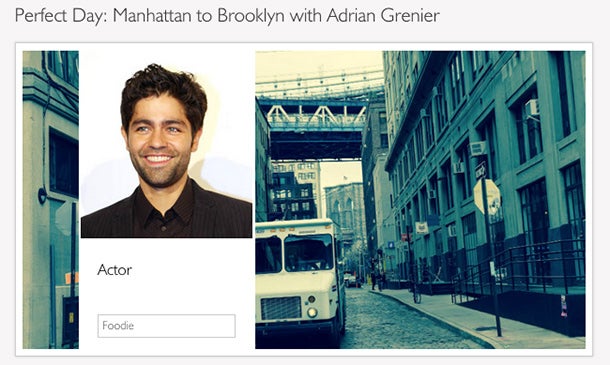 If someone in your personal or professional network is connected to a tastemaker you’d like to tap for content, ask them if they’re willing to introduce you, even if only by email.

“If we have connections that we’ve made to others or investors who have made key connections, or a team member has certain connections, we made sure to reach out through them,” Bashir says. “We sent these tastemakers cold contact emails that explained how we were connected and what we were specifically requesting of them, and, after a lot of outreach and persistence around that, it worked out.”

6. Be brief. Be personal. Be brilliant.

Busy people often don’t have time to read more than a sentence or two of an email, if they read it at all, especially celebrity gatekeepers -- managers, agents, PR people and assistants. Their job is to weed out the fluff, so don’t include so much as a word of it in your outreach.

“Make sure when you make that first contact that you’re concise, yet brilliant. Get to the point fast and passionately and don’t be afraid to make it really personal, really about THEM and why you feel they’re a perfect fit for your brand. No cold, templated messages allowed. Everyone gets those.”