The odds were stacked against Donnie Wahlberg from the start.

The eighth of nine children, he came up hard and poor on the streets of Dorchester, a gritty, working-class neighborhood on the outskirts of Boston. Alcoholism and a bent for self-destruction plagued his tight-knit family. They scraped by on food stamps and the leftover milk and cereal Wahlberg's Teamster trucker father delivered daily to Boston public schools. When they got sick, they sucked it up. Doctor visits were a luxury they couldn't often afford.

Fast forward to today and the New Kids founder has come a hell of a long way from the block.

Donnie's long, unlikely rise to success, spanning three decades now, is hard to miss. He's gone from 80s boy-band bad boy to surprise breakout TV and film actor, to Emmy-nominated producer to restaurateur and back again -- full circle to New Kids on the Block (NKOTB) frontman, only older and wiser at 45. Along the way, the busy father of two and stepfather to one has amassed a fortune topping $20 million. Not bad for a roughneck kid who could've easily ended up hooked on drugs or in jail, as he puts it.

Today Donnie's chatting with us from the backseat of a van en route to the New York City set of the cop drama Blue Bloods. It's just one of four shows he currently headlines. He's also on A&E's Donnie Loves Jenny, opposite his new wife and former Playboy Playmate Jenny McCarthy. Then there's Pop TV's Rock This Boat: New Kids on the Block, a show in which Donnie and his four fellow NKOTB bandmates set sail aboard a cruise to Bermuda with die-hard "Blockheads," their biggest fans. Perhaps the most popular in the bunch right now is A&E's Walhburgers, a rollicking, unscripted inside look at Donnie's eponymous restaurant franchise with his brothers, Paul, 50, and Mark, 43. Not surprisingly, the chronic overachiever executive produces them all. 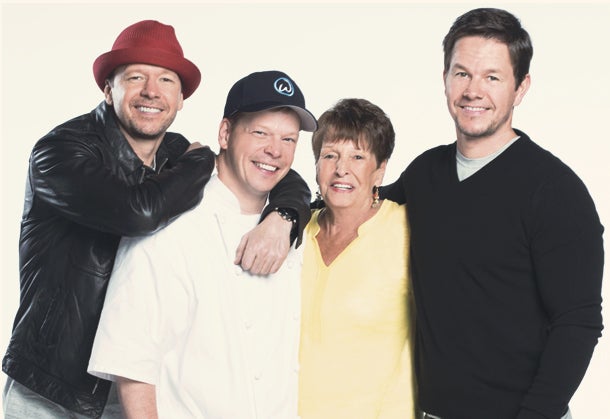 Heap on the recent launch of D&J Productions with McCarthy and prepping for NKOTB's upcoming 40-plus city reunion tour with TLC and Nelly, and it's a wonder Donnie even sleeps. "I sleep, like, one hour a month," he recently joked.

Yet the prankster celebrity entrepreneur still regularly squeezes in time to do his part for Wahlburgers, the family's second successful restaurant business in Paul's current hometown of Hingham, Mass., following the launch of Alma Nove, a fine-dining establishment named for their mother, Alma. And not just by throwing money at it or flexing his star power in the press. He puts his money where his mouth is.

"Before we launched I was taking the train from New York to Boston pretty much every other day to help design the interior of the restaurant, to design the menus, to craft the mission statement, to do taste-testing," he says. "I probably gained 20 pounds in two months tasting all of the food every other day. It was a LOT, like every milkshake, every burger."

Temporarily sacrificing his trademark abs isn't the only way Donnie pitches in at the burger franchise, which he describes as a "cross between Umami Burger and Shake Shack." Just as he says he did after his parents divorced when he was 13, Donnie also acts as the glue that holds his co-owner brothers together -- and who stops them from wringing each others' necks at times.

"After the divorce, I became sort of the dad of the family," he says. "Somehow I became the kid who planned when Christmas was gonna be at Mom's house or at Dad's. I made a plan and called all the siblings. I became that kid, and I still am somehow. Now, me and Mark and Paul are like a three-headed monster, all working together at the same time with me as the perfect middle guy."

Indeed Donnie acts as the often mischievous, not always "perfect," go-between between Paul, the lead Wahlburgers chef and the fifth sibling in the Wahlberg clan, and Mark, the mega movie star baby of the brood. Paul, the only Wahlberg sibling to graduate from high school other than Donnie, inspired Donnie and Mark to better themselves. Donnie still brings both together, despite their insane work schedules and competing priorities.

"Paul handles the food aspects and I'm more of the creative hand in it, dealing with the nuts and bolts with Paul, connecting our family history to it. Mark connects Wahlburgers to Hollywood to market the show even more and he literally runs around the world trying to open franchises in every country."

So far, Mark's aggressive expansion efforts are paying off. The brothers and their beloved 71-year-old sparkplug of a mother opened their first Wahlburgers in 2011 and expanded to a second eatery in Toronto last year, with all four showing up for the star-studded debuts. Two more locations are slated for the Greater Boston area this year, with 60 more currently in the works, according to Donnie.

Related: How Tony Hawk Skated Past Rookie Business Mistakes on His Ride to Success

"Mark is just like, "Hey, let's put [a Wahlburgers] here on top of this giant building.' Then I have to translate that language into Paul-speak and say, "Okay, Paul, that's not realistic, but what is realistic is this...and go from there.'"

Talking Paul into things is something Donnie's done all his life, and, judging by Wahlburgers episodes, he's still pretty darn skilled at it. As patient but high-strung Paul says during the show's opening credits, his mission in life was "always to open my own restaurant, but being in business with my brothers was never the plan." That is not until Donnie essentially sold him on the idea.

"Paul's concept was to open a great burger joint in Hingham with our last name on it," says Donnie. "I said, "Paul, you know you can't put that name on the sign and not expect Mark and I to want to take it to a different place.' More importantly, you can't put Wahlburgers on the sign and not have it have something to do with our family and have a connection to what that means. It's about growing up in Dorchester with nine kids, you know. That's where it had to start. For our love of food, our love of family and good times. For everything we've been through and where we are today."

Related: From Oprah to the Kardashians, 6 Celebrity-Inspired Business Lessons

For the Wahlberg kids, good times centered around a lively family dinner every night at 5 o'clock, "the one time of day that we knew we'd all be together," Donnie says. Alma scratched together savory, home-cooked meals with limited "welfare food" and Donnie's late father Donald, who he's named after, fried burger patties and topped them with surprisingly delicious government cheese. That same cheese, the taste of home to Donnie and still his favorite to this day, graces all of Wahlburgers's signature House burgers.

The Thanksgiving Day burger is another brothers Wahlberg down-home homage to the food they grew up on. The menu is full of them, right down to "dad's buttermilk dressing" and "mom's creamy mayo dressing."

"We share foods that connect to the tastes that made sense to us, from our family's sensibilities, like the Thanksgiving burger. We didn't like Thanksgiving dinner. We liked Thanksgiving leftovers on a sandwich after dinner. That was our experience. We didn't care about the turkey being carved. There was no emotional tie to that. What was an emotional tie was us eating a turkey sandwich six hours after dinner when the tryptophan wore off the first time. So that was really tying family in."

Related: From TLC to the X-Files: How the 90s are Back

Staying tethered to family and home -- and true to the Wahlberg clan's humble Boston roots -- are the heart and soul of Wahlburgers, not just another "celebrity vanity project."

No matter how far and wide their individual ambitions take them -- Donnie in New York and New Jersey and around the globe on tour, Mark in Los Angeles and on sets throughout the world, and Paul holding it down back in Beantown -- going home brings them back together as business partners and, more importantly, as brothers.

"Going home has always served me well," Donnie says. "I can reach out to all different parts of the world to try to do different things and be successful in different ways, but it seems that my greatest connection is to home, whether that's family or Boston, that's home. Launching Wahlburgers together has allowed us to get back to being brothers. We didn't want someone else, some other entrepreneur being in charge of our destiny. I wanted us to be in charge of our destiny and we are."