A flock of seagulls flies low over the Fort Point Channel, whose calm waters feed into Boston Harbor, kicking off a salty breeze. Down an alley along the waterfront, in a basement building behind a padlocked door, lies the unassuming headquarters of Blade -- a brand new initiative from one of the city's most esteemed entrepreneurs.

Paul English, a native Bostonian and founder of travel search engine startup Kayak, launched Blade earlier this year with a highly personal aim: to bolster his beloved hometown's reputation as a leading hub of consumer tech.

And the venture boasts a unique structure to boot. By day, Blade serves as a local startup "foundry" -- which differs from the traditional incubator model, English explains, in that it offers profound team-building and financial resources to only a handful of partners.

By night, however, the wheeled desks roll away and a DJ booth illuminates, transforming the offices into a speakeasy of sorts, where the local entrepreneurial community gathers for curated networking events, or just to listen to music and throw back drinks. 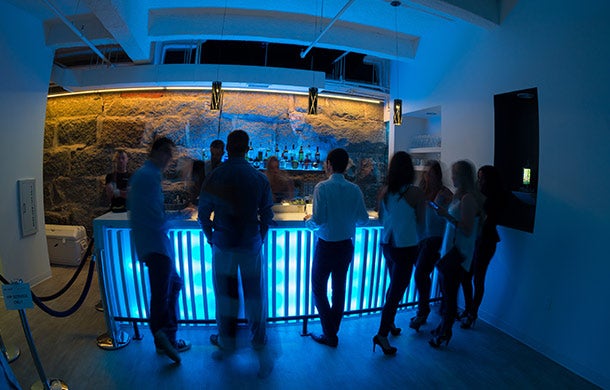 Blade's offices were conceived with this social facet in mind. Guests, who can fill out certain preferences via a proprietary iPhone app prior to their arrival, are handed iBeacon-equipped bracelets when they enter -- whereupon the building automatically starts responding to their inclinations. A visitor's favorite song may blast over speakers in the ceiling, for instance, or, while seated at the bar, liquor preferences might suddenly light up from beneath fully-stocked shelves.

But the futuristic bells and whistles serve a greater mission here. English -- who departed Kayak late last year following the company's sale to Priceline for a cool $1.8 billion -- had always been perplexed that, despite boasting some of the nation's most illustrious universities, like MIT and Harvard, Boston's startup scene felt relatively staid.

To be fair, English adds, it's one that's still rife with activity. Cambridge, for instance, offers the third-highest share of tech economic output in the nation and is home to buzzy companies like TripAdvisor and ZipCar. Additionally, noted incubators like MassChallenge, Techstars Boston, StartTank, WeWork and the Cambridge Innovation Center aim to provide resources for the nation's most gifted students after they graduate.

However, Boston-based companies tend not to carry the same cachet or name recognition as the startups regularly emerging from Silicon Valley or New York. Even Mark Zuckerberg, who famously founded Facebook from his Harvard dormitory, dropped out after his sophomore year to realize the venture out west.

Now, English is hoping to ignite a similar spark. After raising a $20 million seed fund, he has tendered initial investments within one of Boston's most dynamic demographics, he says: its college crowd.

Blade's first two partners, app startups Classy and WiGo, not only target university students, English explains, but have been helmed by student founders.

Classy, a mobile marketplace that facilitates the on-campus sale of books, clothes, electronics and more, was created by UMass grad Mike MacLean. WiGo, which stands for "Who is going out?,' is a social network that shows students where their friends are headed on any given evening. Its 22-year-old founder, Ben Kaplan -- a division 1 hockey player at Holy Cross -- promptly dropped out of school after English extended a life-altering hand. 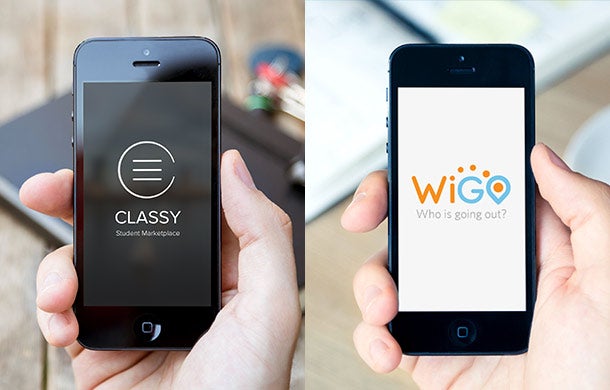 But what exactly does English seek in potential startup suitors? "The thing I liked about Ben [Kaplan] was something I call "arrogant humility,'" English says. "He's really, really sharp -- but he's also hyper aware that in any room, there's stuff in it he doesn't know."

Having long possessed a rebellious streak, English -- who attended seven different schools as a kid and admits he sold marijuana at age 12 -- particularly admires plucky leaders who aren't afraid to push back against accepted wisdom.

While founder character comprises 70 percent of the equation, English says, there is one criterion for the types of businesses he'll bring into the fold: he must believe that the product can ultimately reach 10 million users. "In order to design something for true mass market, you need to have a complete intolerance for complexity," he says. "You can't ever cave."

Even if the engineering team cautions, for instance, that a simple app interface comes at the cost of functionality, English says he always strives to be simple. "The user may want three different things, and it takes courage to say, we're not giving them any of those options -- we're just going to decide for them."

Though simplicity, English knows, can take time to muster. He was at Kayak for 10 years, and sees Blade as a similar assignment -- at least in length of tenure. At the end of his run at Kayak, English describes becoming unmotivated, particularly after the company's IPO and subsequent sale. "I was working for the man," he says.

But today, bounding excitedly across Blade's headquarters -- where video projections of bats and sharks soar across walls, a stock room teems with party favors and booze, and huge windows look out upon expansive, glittering waterscapes -- it's clear that English is back in his entrepreneurial element.