5 Reasons Why Jharkhand Is The Most Investment Ready State

By Ritu Kochar July 20, 2016
Opinions expressed by Entrepreneur contributors are their own.
You're reading Entrepreneur India, an international franchise of Entrepreneur Media.

It seemed that the India startup ecosystem had come to a halt as unicorns faced mark downs and investments dried up. I speak of this in past tense as I believe that the worst is over and startups have come to realize that getting investments will be much harder from now on.

It is times like these when governments come for the rescue of budding entrepreneurs by making up for what lacks in the private industries. India is starting up! Seeing participation from not only metropolitan cities, states like Andra Pradesh, Gujarat and now Jharkhand have been caught by the entrepreneurial wind. Only recently the Government of Jharkhand launched its investment promotion campaign “Momentum Jharkhand” in the city. The state was ranked among the best performing states in business reforms, based on an evaluation by the Department of Industrial Policy & Promotion (DIPP).

Calling it ‘the most investment ready state’ Chief Minister of Jharkhand, Raghubar Das had some pretty solid points backing his arguments.

“Jharkhand, in a sense, is the backbone of the Make in India mission, since it holds 40 per cent of India’s natural mineral wealth and on track to become the country’s power hub by 2019”, he said in his address at the launch.

Strengthening the Make in India initiative, Jharkhand has become an investment ready state and here is why:

‘The global destination of choice for investors’ is what CM Das wants Jharkhand to be, and to encourage it a Jharkhand Investment Promotion Board (JIPB) was formed on July 10, 2016. Aimed at attracting national and international investors, the Board is pivoted on the ‘Ease of Doing Business’ framework in conjunction with the State Government. It will deliberate strategies on effective implementation of investment policies, incentivise New Economy sectors and work towards simplification of procedures, policy and reforms for smooth industrial growth in Jharkhand.

“Formation of the Jharkhand Investment Promotion Board is a step towards this goal and we are confident the JIPB will help in facilitating new investments in sunrise sectors and make Jharkhand one of the global destinations of choice for investors,” Das said at the maiden JIPB meet in Mumbai on July 8. 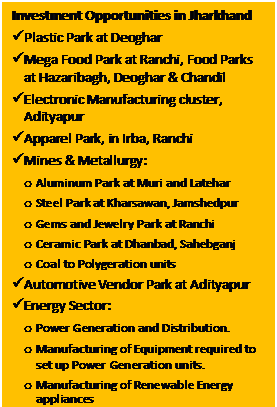 “Jharkhand is ushering in an era of industrial growth and is geared up to showcase its enormous potential to the national and international investment communities in order to attract suitable investments,” Chief Minister of Jharkhand said at the meet.

The Chief Minister emphasized that his government was totally committed to protecting and securing the wellbeing of investments, public life and property. “My government’s policies are in sync with those of the Government of India, in that we truly work as a team with unity of purpose,” he said.

Ever since the incumbent government came to power in December 2014, there has been not a single major incidence of industrial conflict. “Through highly responsive governance systems, we have ensured near perfect industrial harmony. The DIPP assessments on Business Reforms prove our unparalleled progress on labour reforms. It is testimony to the culture of the State’s people and their outlook towards organized systems of livelihood”, he added.

Speeding up urbanization in the state, a “smart city” agenda was what the Urban Development and Housing Secretary, Mr. Arun K. Singh, had in mind. The proposed greenfield smart cities in Ranchi and Barhi promise to bring progress while ensuring sustainability through comprehensive planning. “Investors should be equally enthusiastic about the services sector which would form the urban ecology. The sector has kept up pace. Its share of contribution to the GSDP has grown from 33 per cent in 2004-05 to about 49% in 2015-16,” he said.

5. A haven for investors

The government has ensured that the most investment-ready opportunities are adequately presented to prospective investors in the form of a “Shelf of Projects” publication. ‘The low hanging fruits that early bird applicants can get on board with’ is what Chief Secretary Rajbala Verma call these projects, spanned across the spectrum of focus sectors.

What brings ease of business in Jharkhand for investors is it’s single window system. Investors are assured that they would never require escalating matters or visiting any other department. The State Investment Promotion Board is an excellent consultation platform to provide strategic inputs to the top echelons led by the Chief Minister’s Office.

In a bid to boost the 'Make in India' initiative and develop high value investment opportunities in the state, a 'Jharkhand Global Investor Summit' on 15–16 February 2017 will be organized by state government in Ranchi. The summit aims to establish Jharkhand a premier Investment destination for both foreign as well as domestic investors basis macro-economic system through equitable and sustainable growth, enhance prospects of livelihoods for the people of the state and provide a platform for new ideas and innovations for future investment opportunities.

They also signed a MoU with Cisco to impart networking training to the students of engineering colleges, polytechnics and degree level Institutions in Jharkhand through the Cisco Networking Academy Program to increase the availability of skilled networking resources from within the state.

More About Make in India