Here's how I grew my influence on Periscope.

By Grant Cardone January 26, 2017
Opinions expressed by Entrepreneur contributors are their own.

I hope you're getting your brand in front of as many eyeballs as possible this week. If you aren't, you need to commit to dominating Periscope. You are being used by social media and until you decide to dominate it and own the space, you will continue to be used by it. The first step to dominating Periscope is a commitment to it. The last two years have seen this big surge in live video broadcasting, streaming, and scoping is exploding. Thanks to smartphone apps like Periscope, you can become a “broadcaster” that can record live video streams and share them with your network.

The way I took advantage of this new medium when it first came out was to share daily live broadcasts from my home in Miami. The show topics changed each day and were scheduled out so people could subscribe to them in advance, for free.

Related: 5 Marketers on Periscope You Need to Be Following

Having a set schedule really helped me grow on Periscope. Get in the habit of doing a show live at the same set time for consistency and so your viewers can know when to expect you. Sometimes on streams, I give away something like a free coaching call—priceless to any entrepreneur—to one of maybe 7,000 viewers watching. I often deliver Q&A’s to over 10,000 viewers at a time, all of this done from my cell phone. Periscope is basically an app you download from iTunes or Google, which allows you to follow me for more free content. You will receive notifications of my live broadcasts whenever I begin them. 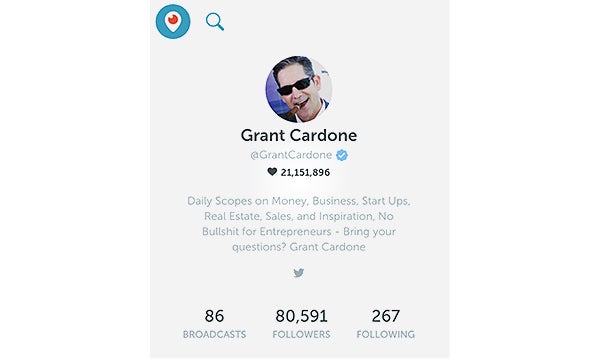 Video streaming is so simple to use it will blow your mind, and you also can become a broadcaster yourself. Many people use these broadcasting platforms for silly, mindless moments, but for me, it is a way to deliver substantial content to entrepreneurs. Back when Meerkat was a thing, I was the #1 Meerkat broadcaster in the world. Now I exclusively use Facebook, Periscope, and Instagram for all my live broadcasting—but Instagram doesn’t save the broadcasts after you end them. With Facebook and Periscope streaming, people can go back and watch the video later. Use them to their advantage. On Instagram, I do exclusive streams that you only get to see if you're involved LIVE. That's powerful.

These new tools have a lot of potential uses for people who want to get their brand known. I believe they are game changers in the world today for those that understand how to use them correctly, so I wanted to give you some tips about how you can use Periscope to your advantage.

Once you create an account, the next thing to do is get busy delivering quality content. The more engaging the content is for your audience, the better chances you have of building a larger audience. Nobody wants to watch a boring live broadcast of something you are just doing. Make a list of things you can give to people that will add value to their life or simply get their attention.

Do some research on your Twitter audience and find out what gets the most engagement and stick to those themes. We all have an area of expertise and specialties, so at the beginning of building an audience, you want to stick to those things. I have a friend who is an artist and streams as she is painting a piece. I have a radio show host and friend that streams daily on Periscope where she does a treadmill routine every day and takes questions from her audience that adores her. Both scenarios work, but wouldn't work for others. Find your own niche and your angle to dominate.

My audience is made up of entrepreneurs, business-minded success seekers, and go-getters; so I keep that in mind when broadcasting. I’m not boxed in when I do my videos, but I do try to generally keep things on topic with what my audience is accustomed to with me.

Two things will get people’s attention:

1) Your NAME, it brands you no matter where you go
2) The EXCITING purpose of your stream

Your title is as important as a title to an article or a show. The explosion of content in this space is a monster and the competition for eyeballs is immense. You need to come up with catchy titles so when people scroll through it will cause someone to check you out. If your name is Donald Trump your title probably doesn’t matter, but if you aren’t on his level yet you better come up with something catchy.

Below, I ran a little test on the same day: one stream named “Untitled”, and one titled “Who’s Got My Money” with bags of cash emoji—so one with a catchy title and one without. The untitled stream had 342 views and the one titled, “Who’s Got My Money” got 1451 views. Your title will really determine how much viewership you will get. Your content will determine how many people stay on and share. 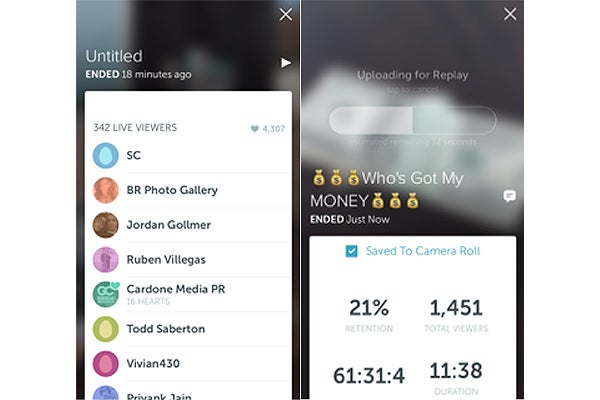 As mentioned earlier, one way to build an audience is to work on delivering a stream at the same time each day. I got in the habit when I was growing my network to each morning deliver a short motivational message around 7 AM EST to start the day. Each night I’d do a more strategic, and typically much longer, stream at 7 PM EST. This proved very useful in building an audience of people that are like-minded, which makes the interactions more cohesive during streams.

In just one month during the spring of 2015, I went from just joining to #8 in the world on Meerkat because of regularly scheduled content. The people at Meerkat reached out to me because they loved that I delivered regular streams of content, as that made their network even more substantial—until Twitter took Periscope and everyone switched over to Periscope. At that time Microsoft even reached out to me to ask how and why I did live streams because most of the media hadn’t caught on to it yet.

When you use Periscope, you’ll have the option to do a private broadcast to a specific group of followers, or share the broadcast on Twitter to anyone and everyone. To get the most views, I’d recommend sharing your broadcasts on Twitter and making sure the location tagging option is turned on. This way you will reach a bigger audience. Plus, having your video on your Twitter feed gives it a longer tail strategy.

Location tagging was a major privacy concern for many people when both Periscope and Meerkat started because it pinpointed the specific location you posted from. Thankfully Periscope updated their app since then so your location is recorded as a larger geographic region, rather than a specific one. This lets you feel free to share your location to provide context for your viewers.

One of the coolest features on Periscope is that people who are watching your stream in real time can comment and “like” the broadcast, which shows up as animated floating hearts. This is a great user experience and I love my hearts, even though I am a big tough businessman, there is something about them that is quite irresistible. Take the time to engage and inspire your audience to comment and discover what they really want from you and what they value.

Hearts help you get your username ranked in Periscope’s app under, “Popular People to Follow.” I currently have over 21 million hearts. When you are on Periscope, you are competing with mass celebrities who have multiple millions of followers on Twitter. To get engagement, you need to figure out creative ways to get your audience to share. If I make a live stream on negotiating strategies, I might tell my viewers that whoever posts a screenshot of notes they take from my content and reposts it and tag me, I’ll do a drawing of everyone that does that and somebody will win a prize. You really have to get creative to get more engagement.

You need to know how to block people because you will see a small percentage of your audience, no matter what you are talking about, that will act inappropriately. I have a zero tolerance, immediate blocking policy for anyone that has any hate for race, religion or being on a path for success. I encourage you not to warn the trolls and don’t feed into their idiocy by commenting back—simply block them and move on to dominating your space and becoming the top in your industry.

I treat haters differently on other platforms. On Facebook, I might leave a hater and his comment in my newsfeed because it can bring me more attention and my followers often fight for me. Periscope is a bit different being a live stream where you see the comments as you broadcast in real time. You don’t need to be distracted by haters, just ban them.

What I mean by that is when you begin a broadcast, it takes 30 seconds, maybe a minute for people to start to come in and watch. I like to do 15, 30 seconds or so of intro before I really get into what I want to talk about. This allows more users to come and actually listen to what you want to say. During this time, I like to give shout outs to who’s coming in and commenting, or I might do something silly, walk around and introduce the topic—but I don’t dive deep immediately.

Here’s a couple of examples of a slow start to a broadcast: 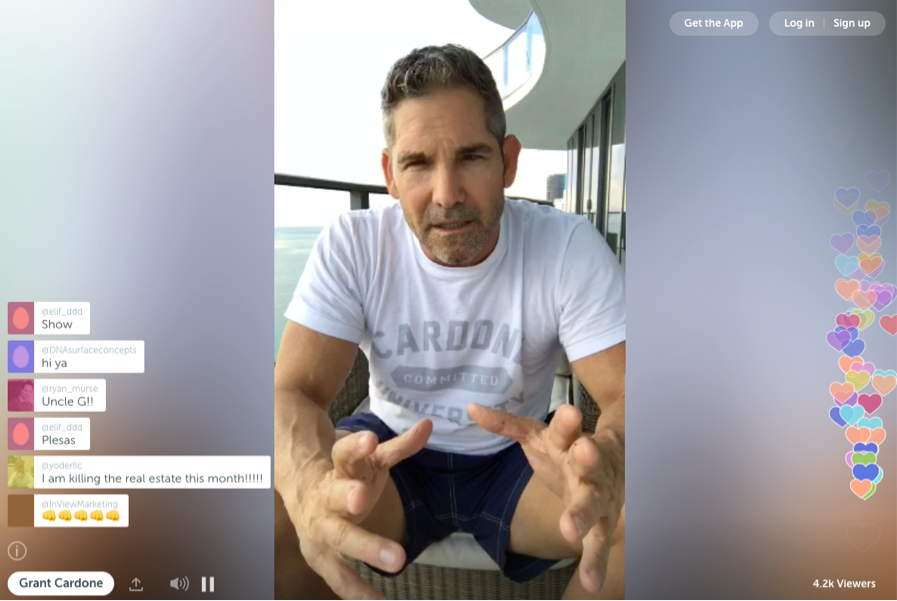 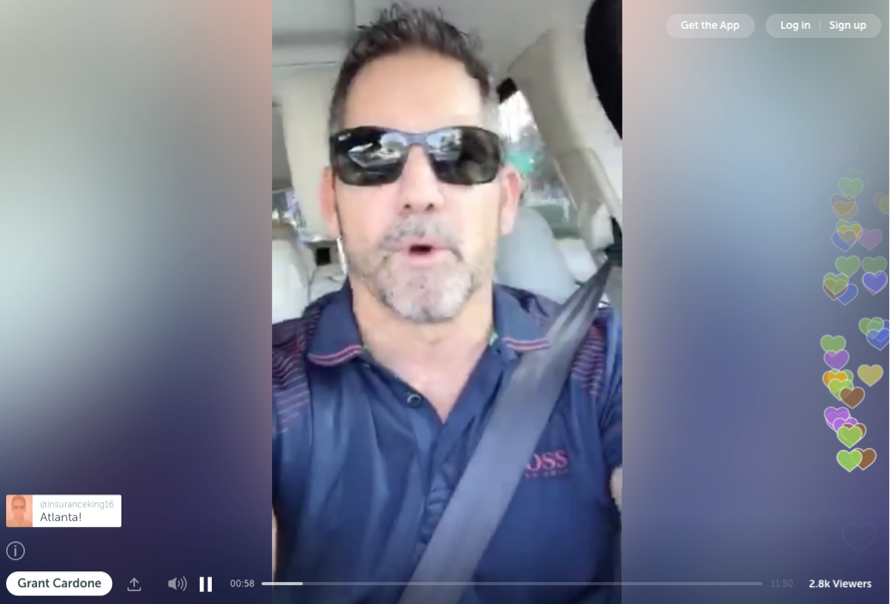 With Periscope, more than any other social media, it’s going to require your commitment. You can’t just schedule automatic tweets or posts like the other platforms. Everything is live, so there is no making 10 videos in a day and drip scheduling them out over the next 3 weeks. Periscope takes frequent attention to gain a foothold.

You aren’t going to have 1,000’s of followers after doing a few videos—unless if you have a massive Twitter audience already in place and are a well-known celebrity. No guru can create a presence for you on Periscope, and you can’t delegate your Periscope activity to anyone else. It has to be 100% you. You don’t need to worry about special effects and making a slick video on Periscope, like so many do on YouTube. This is just live, raw video.

I don’t worry about the light, how my face looks, how the camera is being held -- I just start recording and start interacting with viewers. You are dealing with live audiences here -- other social platforms people are looking at stuff you’ve already posted, whether it be a minute ago or three years ago. Keep this in mind because what you say on live video can’t be edited.

Lastly, you don’t need to invest in a studio and spend a lot of money. Your Periscope presence will require a massive effort of resources in time and energy in order to create, maintain and sustain a presence within the platform. You can generate real clients and real money for your company on Periscope if you do it right. To make it work you have to be entrepreneurial, creative, engaging and entertaining. Understand that Periscope is about people, not technology. Get on Periscope and follow me there @GrantCardone.