Throw Me a Bone: How Shop Dogs Can Be Good for Business

Having a shop dog can help foster social connections, a sense of community and customer loyalty.

By Andrea Huspeni December 22, 2017
Opinions expressed by Entrepreneur contributors are their own.

With low barriers to entry, fickle consumers and competition coming from all sides, it can be hard for businesses to stand out (and survive), especially in urban areas, where market saturation is high. Take the island of Manhattan, within 22 square miles, there are more than 315,000 companies trying to make it. Because of the density, it’s the norm, not a rarity, to see one of your favorite shops fold after being open for decades.

Many companies continue experimenting with traditional marketing tactics to deepen relationships with customers, including loyalty points, exclusive invites to events and deals for first-time visitors. Others are getting a bit more creative, including turning to pooches for help attracting people.

Related: Amazon Opens Up Dog Park for Its 2,000 Office Pups

Caramel trots over to greet me, tail wagging and ball in mouth, as I step into the boldly-painted Beba Blue hair salon in Manhattan’s trendy Hell’s Kitchen neighborhood. 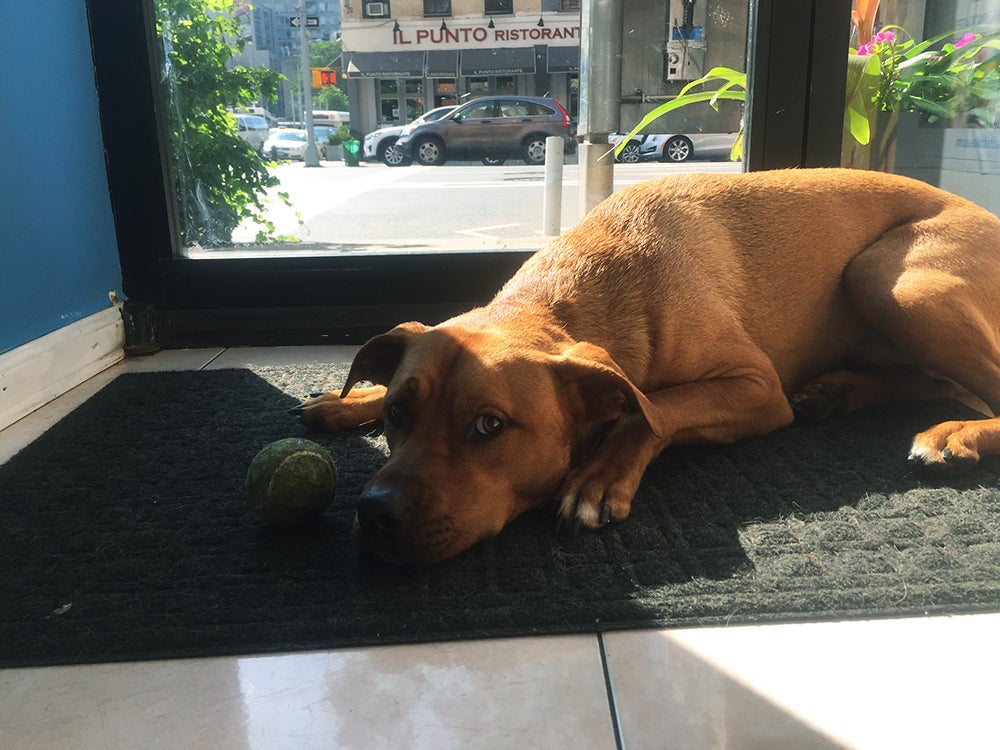 The dog has been a staple at the salon since the owner, Liljana Ndreu, rescued him. While he can act as a guard dog -- to protect Ndreu and some celebrity clients -- his main purpose is simpler: to make people happy.

After opening the salon in 2009 in Hell’s Kitchen -- a neighborhood that, until recently, was considered a dodgy area -- Ndreu knew that once things settled down, she wanted a four-legged friend at her location.

“My dream was to always have a salon dog. I thought it was a luxury for my clients; it benefits them,” she says. “In New York, they want a minute to relax, and I thought having a comfortable salon, and a dog, would provide that.” 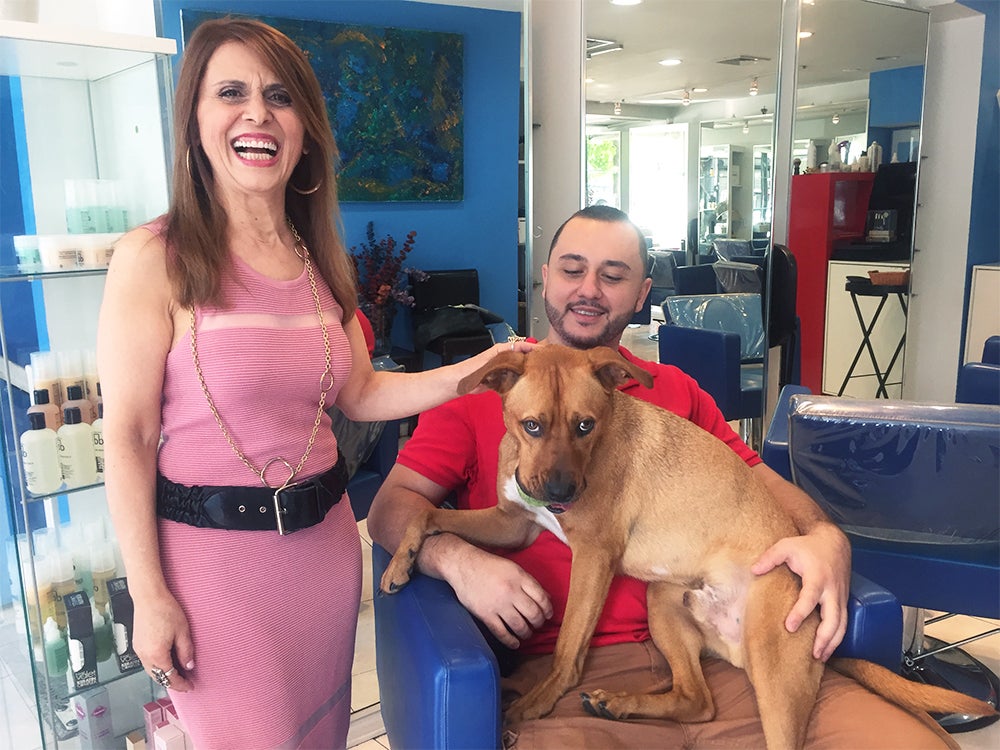 At almost 3 years old, the medium-size mix’s sweet demeanor has indeed brought smiles to many customers’ faces, which is good not only for their mood but also for business.

Before, people would come in just once a month, or every six weeks, Ndreu says. But after she made her salon dog friendly, some customers have begun visiting more frequently, simply because they “miss Caramel.”

“When people come here, they are stressed from the day, they are tired, but when they see Caramel, everything is okay,” Ndreu says.

Related: Cute Pictures of Dogs Our Readers Brought to Work

Dropping the ball in front of me, the copper-colored pup hopes I engage in a game of fetch, which I obviously do, as he is hard to resist. 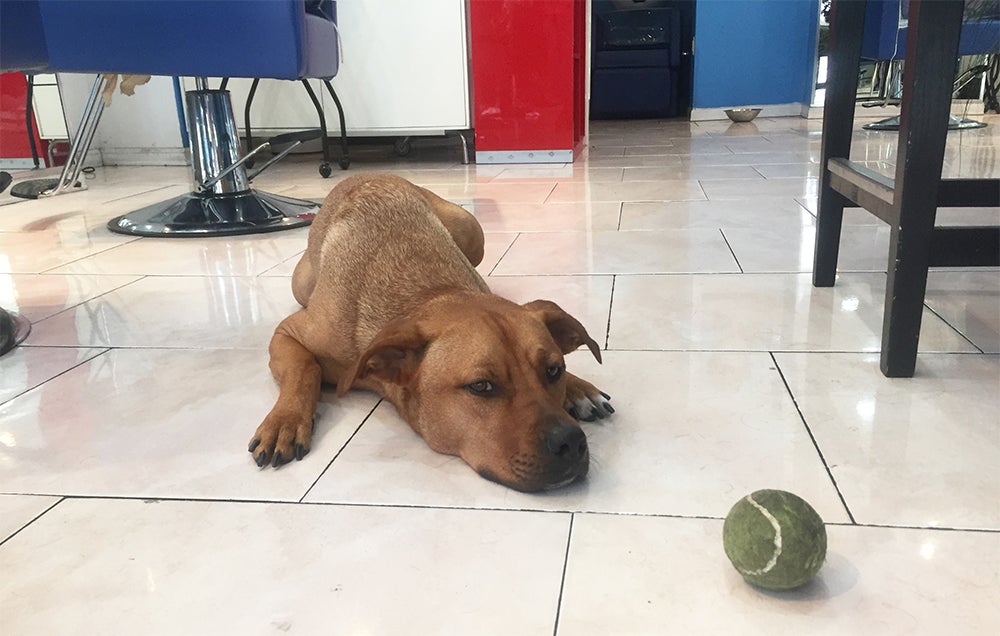 Caramel waiting patiently for me to throw the ball.
Image credit: Andrea Huspeni

The benefits of dogs in our lives

As a business owner, having a dog around helps Kathy Grayson feel better, too. The founder of contemporary art gallery The Hole in New York City, she told me earlier this year that her dog, Bertie, a pomeranian rescue, helps her relax around customers. 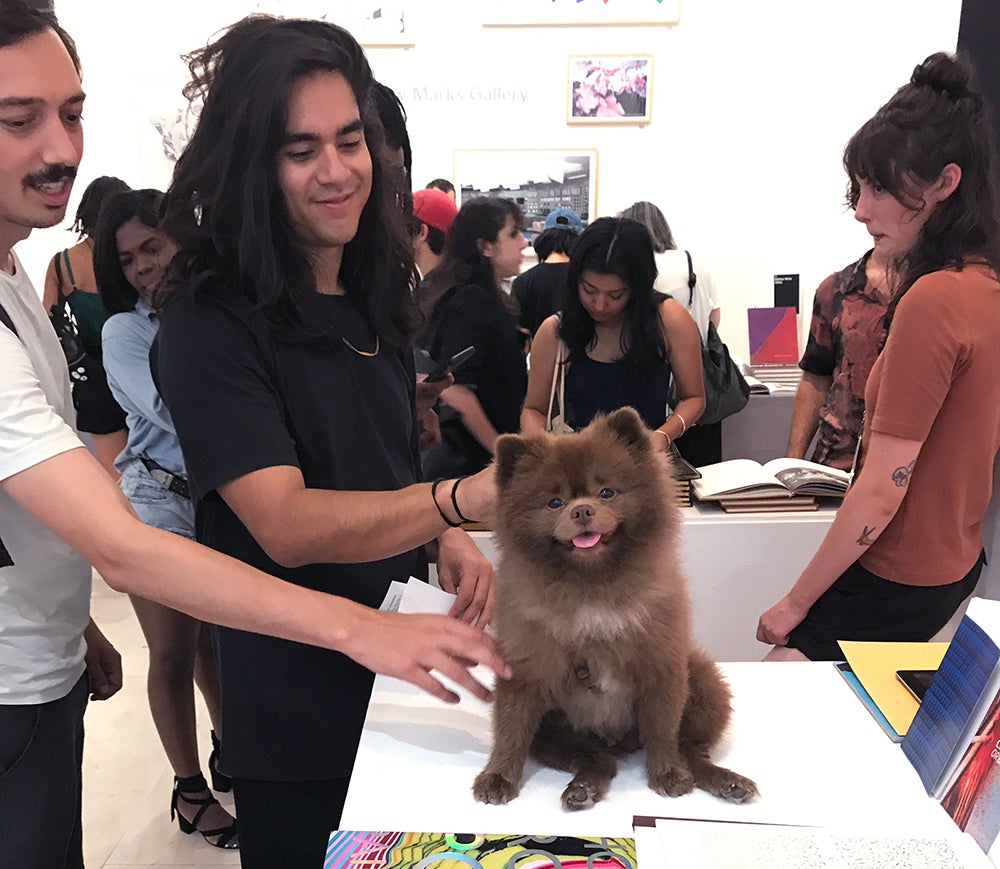 “The general public can often be intimidated by the art world, and because I get a lot of people coming at me, I have gotten a bit cagey, perhaps,” she told me earlier this year. “I am kind of shy and aloof, and Bertie breaks all the ice. He puts a smile on everyone’s face and makes a connection between me and people who come to the gallery.”

These sort of benefits have science to back them up. Indeed, for years, researchers have been studying the human-dog bond and have found many advantages to having a pup in your life, including lowered blood pressure and cholesterol and reduced stress.

And a relatively recent study found that interacting with animals can increase a person’s level of oxytocin, or the happy hormone.

"That is very beneficial for us," said Rebecca Johnson, a nurse who heads the Research Center for Human/Animal Interaction at the University of Missouri College of Veterinary Medicine, in an interview with NPR. "Oxytocin helps us feel happy and trusting."

She added that it can also affect people in the long term. “Oxytocin has some powerful effects for us in the body's ability to be in a state of readiness to heal, and also to grow new cells, so it predisposes us to an environment in our own bodies where we can be healthier.”

This may be one reason 17 percent of offices welcome dogs (or other animals) at work. Boosts in creativity, collaboration and morale are just a few other perks of having a pup in the office

And while there hasn’t been research directly related to how brick-and-mortar shops benefit from having a shop dog, a huge conglomerate is making a push for more pet-friendly businesses.

Mars, the mega corporation with products in food, candy and pet care, launched a pilot program in Franklin, Tenn., this past summer called “Better Cities for Pets,” in which more than 80 local businesses opened their doors to dogs. Mars is looking to measure the benefits of having pets in businesses, whether they are just visiting or are “full-time employees.”

In a preliminary survey of Franklin residents, Mars found that 75 percent of respondents allow pets in their business or building; 67 percent consider themselves pet friendly and 49 percent agree having pets around is good for business. 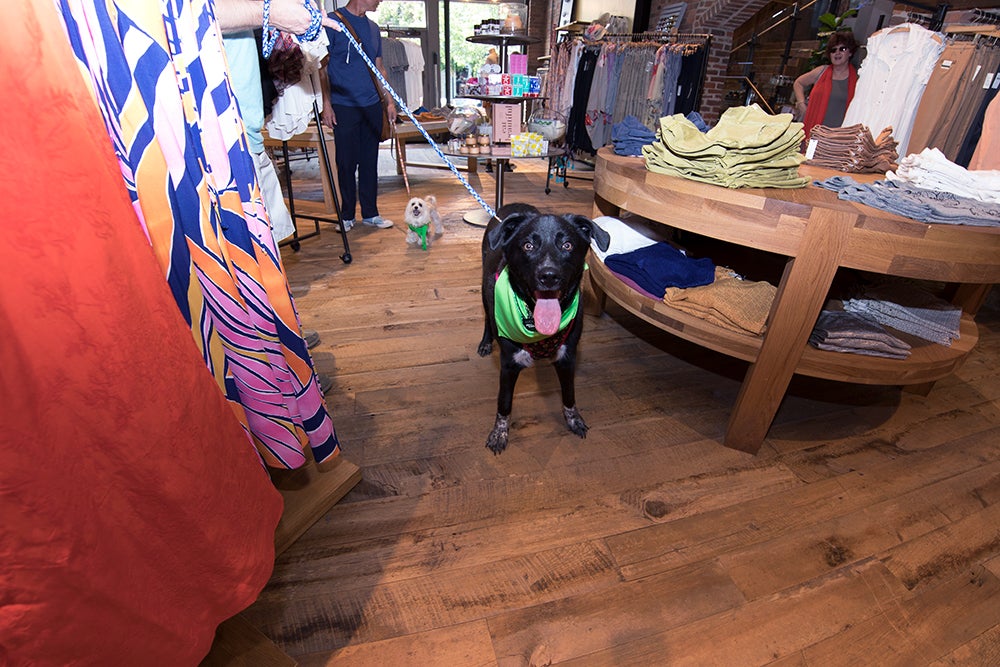 “Based on our survey findings, we know that residents not only value the ability to bring pets in more places, but they believe that having pets in more places, including shop dogs, fosters an increased sense of community and social connections -- and even customer loyalty,” Jam Stewart, director of Mars Petcare corporate communications, says.

“At my store, I often bring my dog to work with me. We’ve noticed that having Beau in as a shop dog creates an environment that puts employees at ease -- as it’s been well documented that pets help reduce stress,” she says. “When our employees feel more at ease, this in turn creates a better atmosphere for our customers as well.”

Related: Brain Break: I Took My Dog to Our Newsroom. Here's How My Day Went.

While dogs can be good for business, it is important to ensure safety first. Not all dogs are cut out to be around a diverse group of people, and not all customers appreciate having a canine in a business. Make sure your dog is people-friendly, okay in environments that have a lot of activity going on and if needed, have a sign letting people know there is a dog at the location. 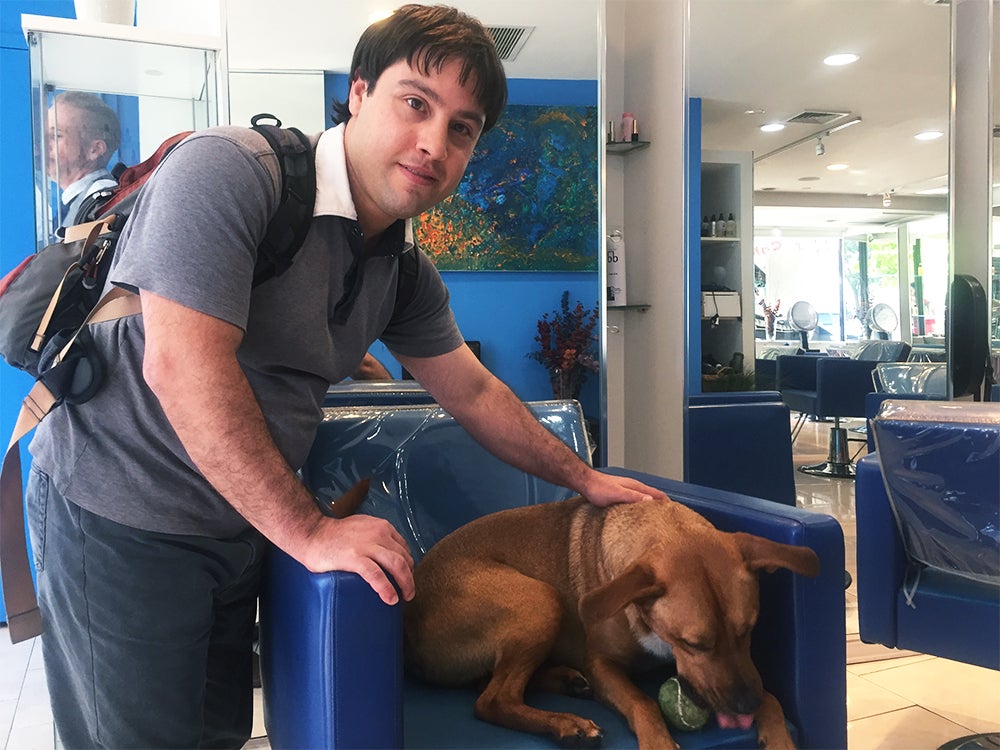 As I get ready to leave Beba Blue Salon, Caramel is sitting by the door, basking in the sun with a ball beside him. A man walks in to say hi to Caramel. The dog jumps up in the salon chair, where the man can pet him more easily, ruffle his ears and pat his head. After the man leaves, Ndreu tells me he isn’t a customer of the salon, just a fan of Caramel.

“I never see him smile,” she says, but “when Caramel jumps on him, he smiles. He becomes a different person.”