All it Took Was One Taste, and Now This Former Designer Is Living a Booze Industry Dream

Tom Baker co-founded coffee liqueur maker Mr. Black, which is now sold nationally in Australia and the U.K. and parts of the U.S.

How's this for a founding story? Some guy goes into a distillery, loves the product, then calls up the distiller and asks him to be business partners. That's pretty much what happened to former designer Tom Baker when he co-founded Mr. Black, the maker of a cold-brewed coffee liqueur that's now sold nationally in Australia and the U.K.

"I called up the guy that was making the booze and said we should start a company, and that's how the business started," Baker says.

Baker teamed up with Philip Moore in 2012, and it took 240 iterations to come up with the product that won a gold medal at the International Wine &; Spirits Competition in London that same year. Mr. Black was already finding success in its native country of Australia, with Baker dropping by restaurants and bars with booze in hand. Still, Baker, who was at the time working his day job, wasn't sure if his passion project was a full-fledged business. So the co-founders turned to the crowd.

Related: The Complete Guide to Starting a Business

"If we can sell 200 bottles, we'll start a business. We'll incorporate, we'll do everything because if we can't sell 200 then it's probably not a good idea," Baker says about the co-founders' intent in 2013. "Let's just put it out to the world and see if it's a good idea."

The co-founders put Mr. Black on Australia crowdfunding site Pozible. Not only did Mr. Black reach its goal in the first three days, it became the first alcohol company in the country to pursue crowdfunding. The founders raised more than $20,000, more than double its goal of about $7,800, with the support of 286 people. Then sales kept rising in the following months.

"So straight away we knew that it had some legs and people liked the brand and it all meshed," Baker says.

Eventually, Mr. Black landed on the shelves of Dan Murphy's, an Australian liquor store chain owned by Woolworths with more than 200 locations. It remains Mr. Black's only big retail partner in the country. (The company also sells in independent shops in Australia).

"The philosophy of Mr. Black from the start is just do good stuff and hope we attract the right people," Baker says. "That's attracted retailers and distributors to us but also the people who work for us."

Distribution in the U.K. also happened organically, albeit not smoothly. After a distributor laid out what a great market the nation would be for Mr. Black, the deal fell apart over pricing, Baker says. So he reached out to another distributor.

In the U.K., Mr. Black is sold in Harvey Nichols, Selfridge's, Oddbins and John Lewis, but its biggest retailer there is Amazon, where those with a Prime membership can order Mr. Black and receive a bottle three hours later.

Late in 2017, the company took on its biggest challenge yet: selling in the U.S., which Baker equates to 50 different countries. He plans to take on that challenge by targeting specific cities: Los Angeles, San Francisco, Miami, Chicago and New York, where it's already sold at some bars and retailers.

Year over year sales have doubled since the company started, and it's now sold in more than a 1,000 bars, restaurants and liquor shops across Australia, New Zealand, Hong Kong, the U.K. and New York City, and there are distribution deals in place for Chicago and California in 2018. It employs 15 people. Baker plans to sell a half million bottles of Mr. Black in the next three years and increase staff to more than 30 people. He wants his company to be a player in the $54 billion liquor industry.

"I launched this business while I was still working full time. I was sitting at my desk and I was like if I can sell enough of this stuff that I could just pay myself even just enough to pay my rent and get a beer, that would be success," Baker says. "Within a year I was on Mr. Black full time. It was just the best."

Read on for other insights from Baker on starting a business and taking on the competition. 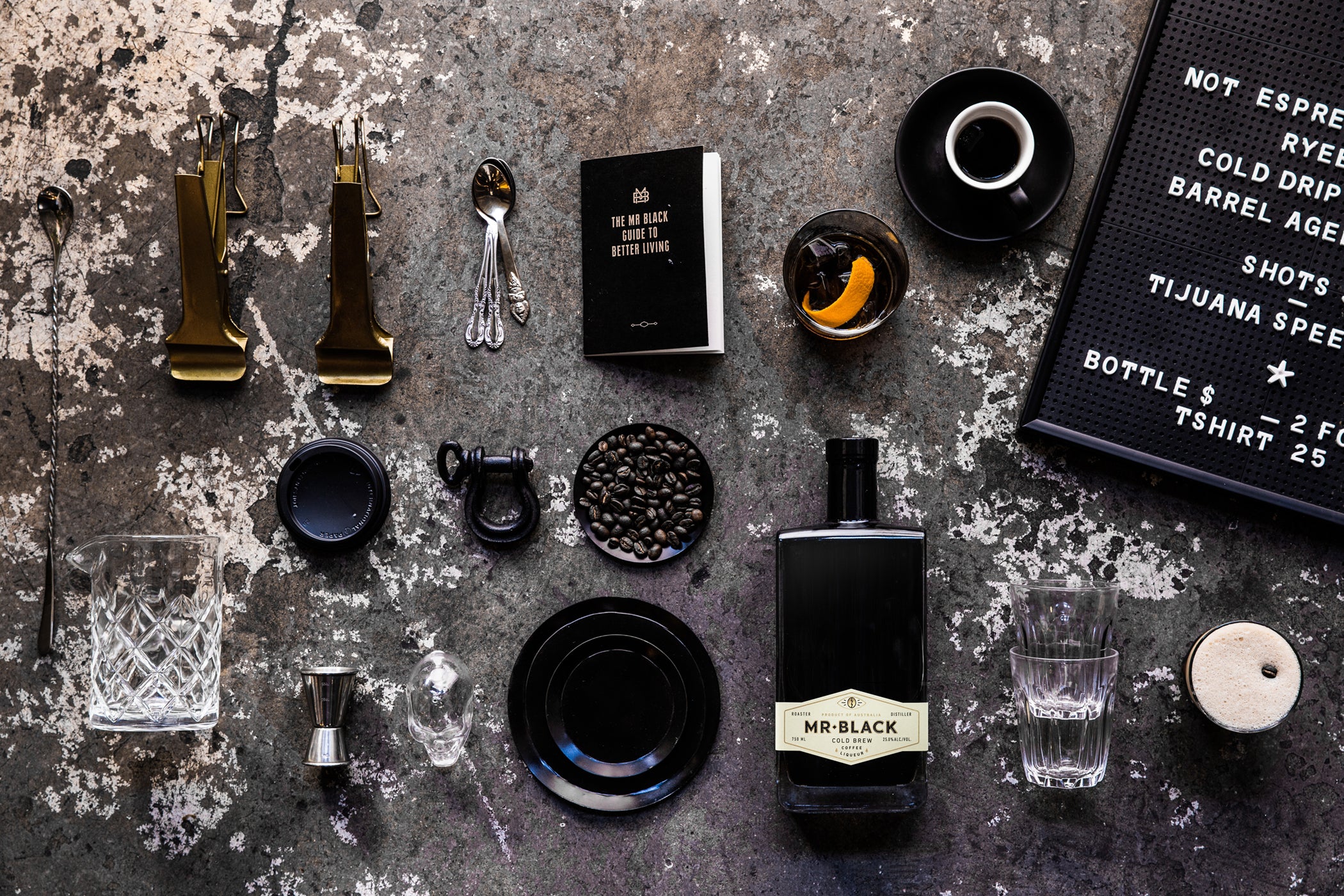 How did you work out your partnership with Moore?

There are some rules that make good business partners, you know complementary skill sets and all. And just conveniently the guy I met had a really complimentary skillset, as in I don't know how to make booze, and he doesn't have a lot of experience in marketing or sales, which I did. We split the thing down the middle. We were really clear on what we wanted.

Has the product changed much since that first year?

Everything has gotten better. The glass is better, the liqueur is better, but it's not not that different from when we started. The philosophy is still the same: very good coffee and a nice shiny bottle that people like to hold.

We [always made] everything ourselves. As soon as you don't have to outsource anything, it makes your life easy and harder at the same time. It means you don't need to look for production partners, which is handy. And you have absolute control of everything you do. I guarantee when you get a bottle of Mr. Black, I know it's good, because we made it. The problem with that is scaling up.

Why do you say scaling is an issue?

When you make cold brew, you can't just buy a cold brewer that's twice as big. It's hard to make a large quantity of very good cold brew. It's very challenging. It's incredibly oxygen sensitive, and it is susceptible to things growing in it. Even just roasting the amount of consistently awesome coffee is a challenge. We both have to innovate how we sell it but also how we make it. We need to invest in completely radical new ways of making the products, and we're exploring them now.

What's your strategy for landing in America?

We've done no PR. We've got no marketing department; it's me and a few other guys going around the block. We're working out what our flavor is here. What we didn't want to do was just come in and say New York should drink Mr. Black like they drink it in London and Sydney.

We have talks every week with the largest distributors and importers in the U.S. We're taking our time at the moment. We're effectively self-distributing it. We can find our place in the market before we have to start negotiating, which is good and helps change the balance of power.

What do you think gave you an edge with this particular business?

I drink a lot of coffee. I just have this overwhelming enthusiasm about brewed beverages. Coffee is more complex than the finest red wines. It has changed the course of civilization for like 1,600 years, it's sort of responsible for the Renaissance and wars and the entire creativity of every graphic designer ever. It's this brilliant thing. So I think just my enthusiasm and often unrequited love for coffee is hopefully a thing that drives us forward.

Mr. Black has amazing bottles and I knew you were a designer in the booze industry before starting your company. Did you design them?

I designed the original bottle. The current one is actually designed by some legends over in Greenpoint, Brooklyn, called the Young Jerks.

I do do a lot of the graphic design for Mr. Black as well. The real problem is I really enjoy doing it. I will spend my weekends just designing stuff for us because I love it -- when I should be doing the cash flow projections.

Are there any out there strategies you've used to market your brand?

Conventional wisdom is don't attack you competitors. Because if you're a bar, if you're selling a lot of Kahlua every year and that makes you a lot of money, if I attack that brand, I'm somehow undermining your decisions to retail it. It's generally not a smart thing to do, but Kahlua is terrible.

So we ran the ad that says "I really feel like a big glass of Kahlua, said no one ever." I ran it in newspapers, in like 150,000 circulation food magazines in the U.K. I ran it at trade shows. It worked; it gets noticed. It also gets cease and desist, but it gets noticed.

We've done radio ads. We do print ads. Again, conventional wisdom says don't advertise, do social media and we do that as well, but it works. I think a lot of people say advertising doesn't work because they don't have an interesting point of view. But, when you've got something interesting to say, you should tell people about that on every possible channel.

What would your advice be to people who are just starting companies now?

As a brand, your number one asset is your name. You need to assertively protect it and make sure you have adequate registrations in the market which you need to sell it. And we didn't do that and it bit us big time with very long, protracted legal battles, which are a real distraction from our mission.

What's the most surprising thing about working in the liquor industry?

You get to drink this stuff. Our job is booze, so while it is burdensome in terms of regulation and it's taxed into existence and largely controlled by four or five very large companies, at the end of the day, my customers are the world's best bars and restaurants.