This Incubator for Women-Focused Businesses Finds the Color Pink Empowering, Not Demeaning

A pink neon glow emanates through the windows of The Pink Ceiling, an incubator for women-led and women-focused businesses. Located in Raleigh, N.C., it sets the tone all the way to the parking lot that those who spend their days inside are serious about the color pink and what it means to them.

The Pink Ceiling is an investment firm, “Pinkubator” and consulting practice. Its founder and CEO, Cindy Whitehead, spent the first two decades of her career founding and running two startups, both focused on sexual health. Her second company, Sprout Pharmaceuticals, famously developed a pill called Addyi to boost female sex drives (like Viagra, but for women). She launched The Pink Ceiling in April 2016, less than a year after Sprout sold to Valeant for $1 billion. (Since then, Valeant has returned Sprout back to its former shareholders, though Whitehead has yet to announce her new role in the company.)

Related: This Entrepreneur Who Sold Her Company for $1 Billion Wants You to Throw Out the Unwritten Rules That Hold You Back

“Pink Ceiling was really a follow-on of the work that started for me at Sprout,” Whitehead says. “I got a front-row lesson in what it means for women to advocate for themselves or for each other.” 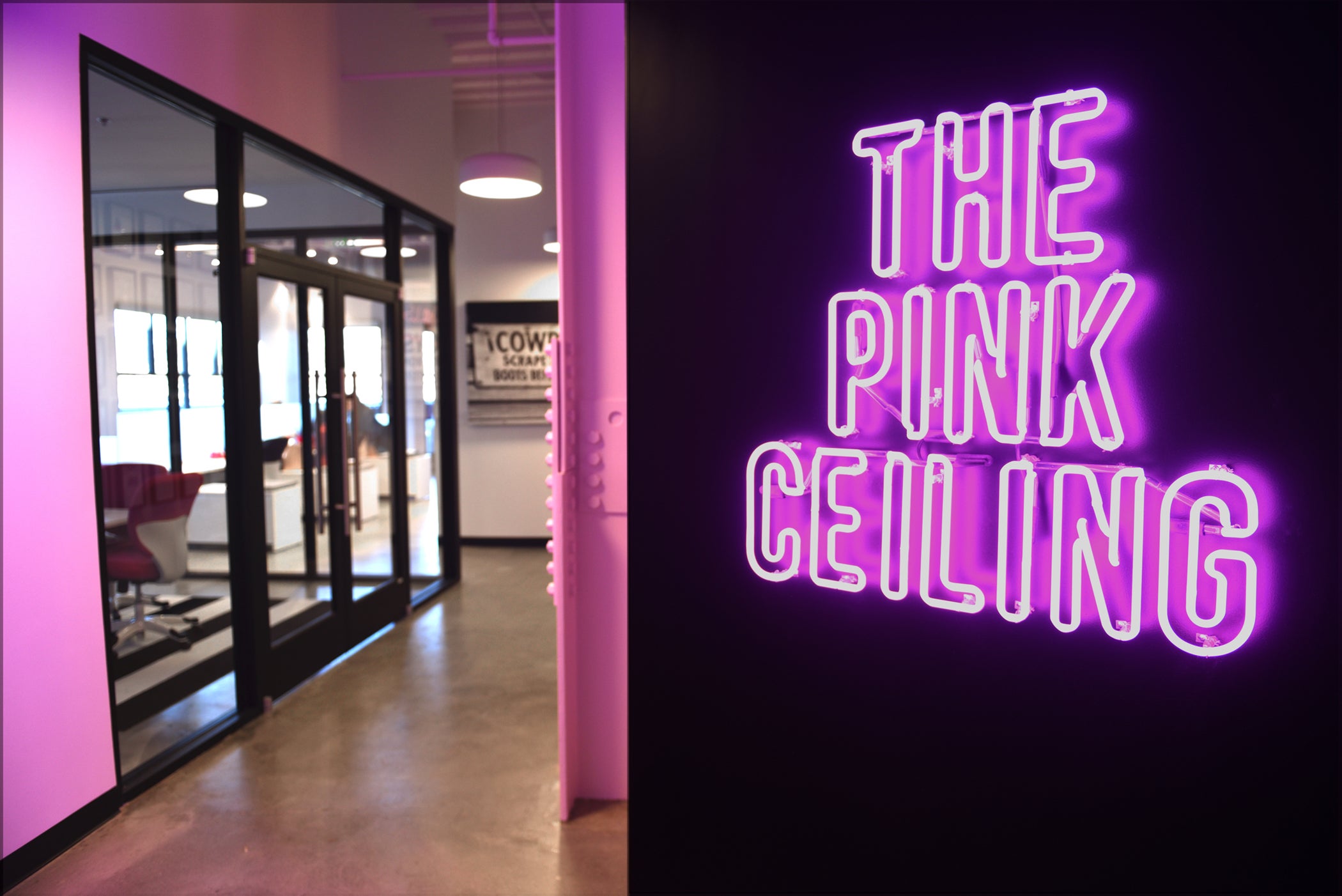 Indeed, in 2017, a mere 2.2 percent of venture funding in the U.S. went to women-led businesses, according to VC database Pitchbook. Whitehead believes mentorship among women is the solution, and that’s why she created a space to cultivate it: to help other women build successful companies even faster than she did.

“Our mission statement is to make women really rich,” Whitehead says. “That's not all a joke. We think that what will happen is, if we get other women outcomes like I've been fortunate to have, we really will start to change things,” she adds, referring to her two business exits totaling more than $1.5 billion.

However, The Pink Ceiling does have male employees, and there are male-founded companies in the Pinkubator. The requirement for member companies is that they do work on behalf of women or address women's needs in some way. On the average day, between 15 and 25 people work in the space. Whitehead and her team have developed a design and culture that encourages founders to build relationships and get empowered in unique ways.

For example, a large glass table in the office is a gathering place where everyone eats lunch together every day. Employees and company founders have a chance to chat about everything from business to reality TV. They started this ritual to cut down on the number of meetings they were scheduling with one another, but it’s morphed into a daily team bonding experience.

“It’s followed me through all of my companies, this idea of actually sitting down and having lunch together,” Whitehead says. “The idea was to get rid of so many meetings in the day, and as we move fast, being small and nimble, keep everybody on the same page. But I think what it ultimately turned into was family dinner.”

One wall features caricatures of all Pink Ceiling employees and Pinkubator founders, along with his or her nickname. Whitehead calls nicknaming The Pink Ceiling’s “biggest quirk,” and it’s a tradition she started at her first company, Slate Pharmaceuticals. All her life, Whitehead says she’s had multiple nicknames for her mother, so she wanted to apply this practice at the office.

Nicknames are sometimes off-color and all have elaborate back stories. For example, one woman’s nickname is “Duck Balls,” but they sometimes shorten it to “Ducky” to keep it clean when outsiders are present. It’s derived from her demeanor (calm on the surface but extremely active underneath) and the fact that she once bluntly used the word “balls” to prove she was comfortable having conversations about men’s sexual health. Other nicknames Whitehead shared include Sharky, LouFa and Nurse Ratchet. 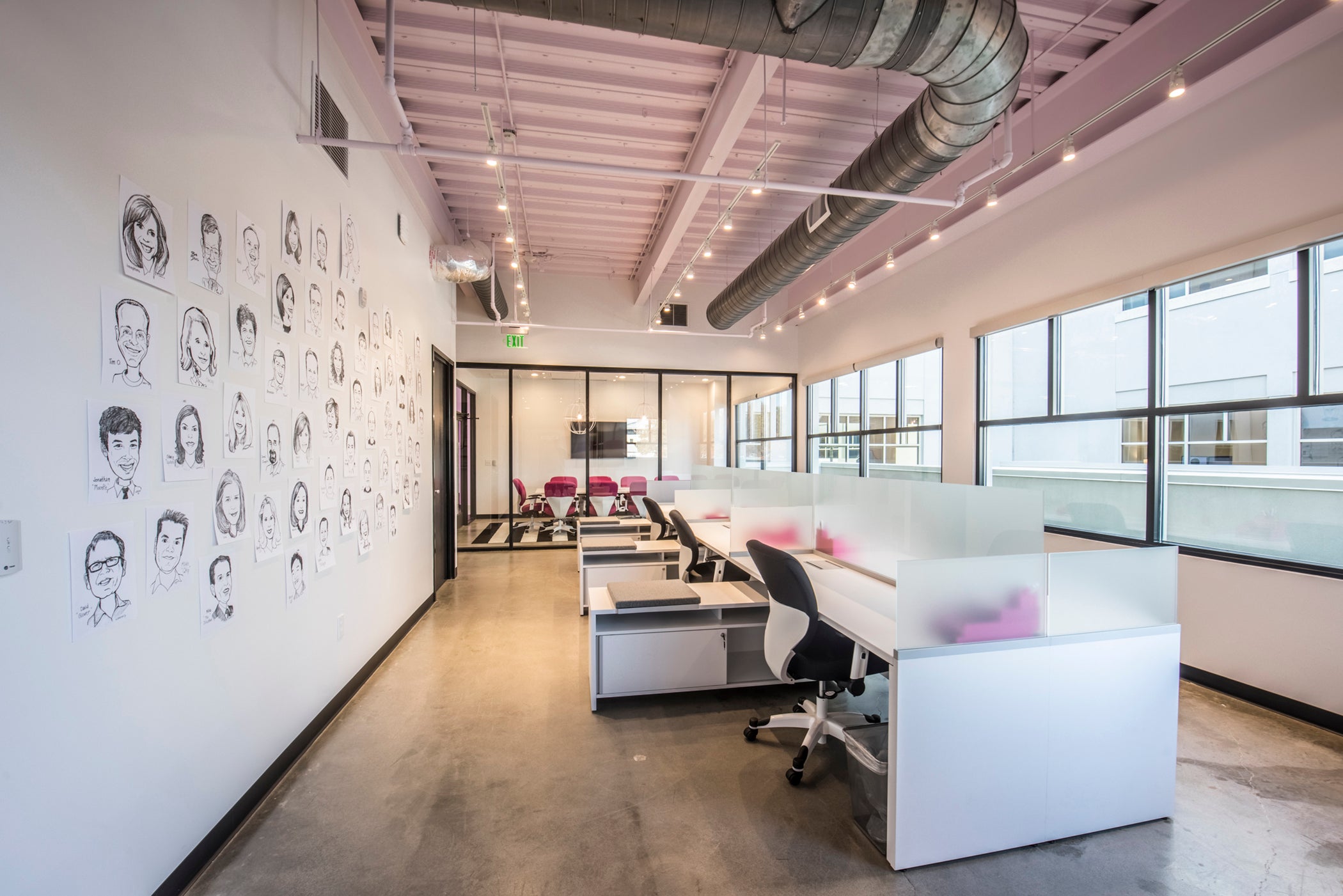 “As you build an environment in which not everybody is going to be together every day in the same space, it became this folklore that made you familiar with one another,” Whitehead says of the tradition. “You get a feel for the personalities in the office. It’s a celebration of individuality that happens in our space and what everybody has to bring to the table.”

Nicknaming is just one example of how The Pink Ceiling’s culture is defined by “a healthy irreverence,” as Whitehead puts it. A poster of Marilyn Monroe blowing a bubble with (pink) bubble gum, a gumball machine, coffee mugs that say “Kiss My Pumps!” and wall graffiti that reads #unapologeticallypink underscore this theme.

“We have to have an ability to be very candid with each other behind closed doors and then lock arms and go conquer the world,” Whitehead says. “A lot of the traditions and quirks of what we do are about fostering a sense of humor and individuality, so that we aren't taking ourselves too seriously, so that we can have frank conversations.”

These frank conversations, Whitehead says, are important in mentorship. If a young woman entrepreneur hasn’t found a market for her product outside of her sorority sisters, Whitehead says, it’s crucial to be able to tell her that without worrying about hurting her feelings.

And of course, there's the color pink. It's everywhere, including a pink ceiling in the entryway, pink chairs, pink lockers to store personal belongings, a pink London-style phone booth where people can make calls away from the often noisy open floor plan and even rosé wine on tap.

Many women reject the color pink, believing it to be a demeaning stereotype, especially when it comes to products marketed to women. But Whitehead is reclaiming it.

“Pink is about owning it as a woman. Pink, for me, was the shift from underestimated to unapologetic,” she says. She felt that many people dismissed her as she developed Addyi, which some called “the little pink pill.” “Honestly, all that was missing was the dismissive pat in the shoulder when they said it to me.” 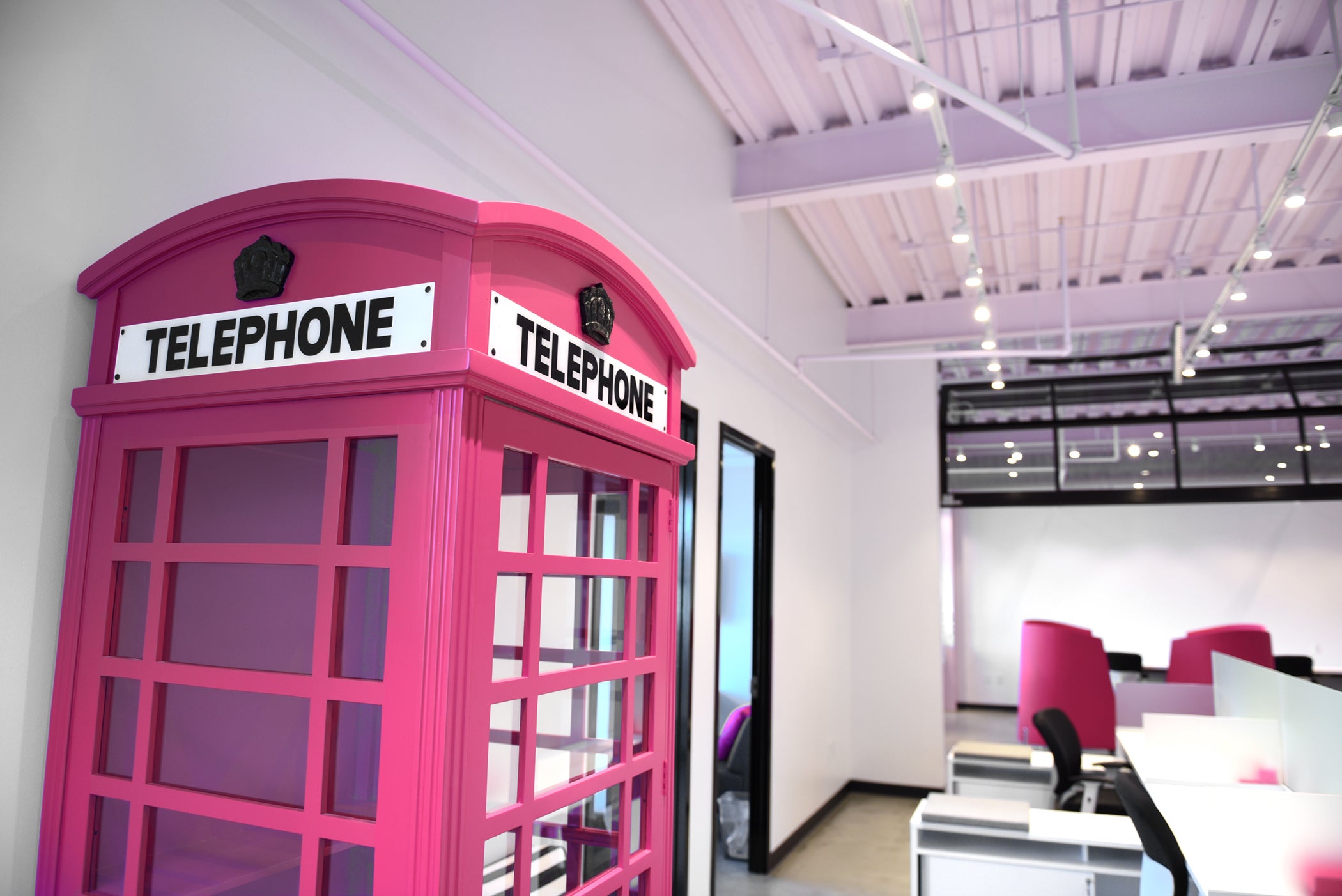 Instead of downplaying her femininity in an attempt to be taken more seriously as the CEO of a women’s sexual health company, Whitehead did the opposite. She even wore bright pink to a meeting with the FDA.

Today, she wants to send a message to female founders that they should try to dismantle stereotypes and show that women are capable and not to be dismissed, regardless of what color they’re wearing. The idea that a woman should act or dress like a man to excel in business is outdated, she believes.

“There is something you bring to the table uniquely as a woman, and you should never mute that or apologize for it,” Whitehead says. “I think we’ve shifted from ‘pretty in pink’ to ‘power in pink.’ I like to say, ‘proven in pink.’”

Related video: How to Pitch 'Female Viagra' to a Boardroom Full of Men