By Tamara Pupic May 15, 2018
Opinions expressed by Entrepreneur contributors are their own.
You're reading Entrepreneur Middle East, an international franchise of Entrepreneur Media.

When I first met H.E. Maryam Al Mheiri, CEO of both Media Zone Authority – Abu Dhabi (MZA) and twofour54, at an event in Abu Dhabi, it was refreshing to see her avoid the clichéd and oftrepeated trope of talking about what a privilege her job has been, and instead be warm and disarmingly honest in telling the audience about how she navigated her own fears and insecurities in the boardroom.

Such instances happened at the very beginning of her rising high up in her career, she said, when she had to not only regularly take part in male-dominated meetings, but also to chair them. Her solution to these jitters was to make sure everyone knew why she was there in the first place- she used to start these gatherings by making finance or technology- related remarks which was supposed to, as per her belief at the time, showcase confidence in her expertise, and thus establish her credibility. As this story shows, Al Mheiri has the gift of betraying the heightened tension of someone in a high position, making you want to trust and follow her simply by being authentic. And her on-stage persona is indiscernible from the one I meet after the panel, or even when working on this interview- here is someone who stays true to who she is at all times. 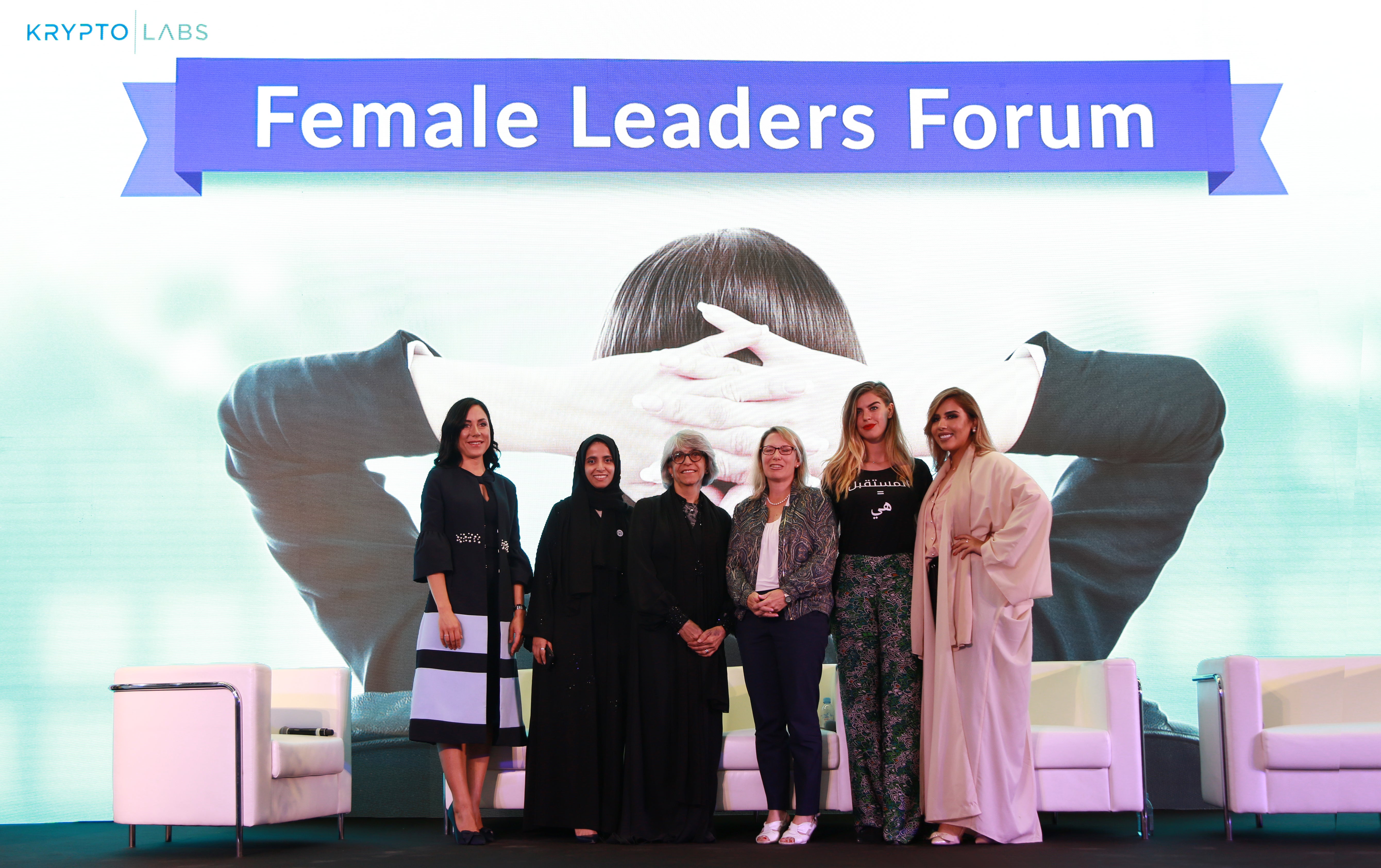 Al Mheiri oversees Abu Dhabi’s Media Zone Authority and its commercial arm, twofour54, which were set up in 2008 to develop Abu Dhabi’s nascent media and entertainment industry. In the intervening decade, much has changed. “Our vision at twofour54 is to become the capital for content creators and my role is to lead our dedicated team on this journey, and of course, there have been challenges along the way,” Al Mheiri says. “The two biggest were developing the talent pool and infrastructure. We recognized from the start that these were vital to creating a sustainable and thriving media industry. When twofour54 was first established in 2008, we didn’t have the infrastructure in place that we do today that allows media firms to so easily do business, such as worldclass studios, a backlot, and support services. We’ve had to develop this infrastructure, both hard and soft, piece by piece, with the support of our partners and the Abu Dhabi Government. Today, we have world-class facilities that not only attract top media firms to join us, but also enable the businesses of our existing partners to thrive. Similarly, the UAE is a young country with a young population, so we have had to work hard to develop a skillset that allows the sector to grow through initiatives such as creative lab, summer camp and our internship program. Developing local talent remains one of our top priorities today.”

Abu Dhabi’s current reputation as a media hub rests on factors such as offering diverse locations, appropriate facilities, talent pools, and the much talked about 30% rebate by the Abu Dhabi Film Commission. It is the Middle East’s first international production incentive, providing access to a 30% cash back rebate on productions, which also includes travel and accommodation. The impact of the rebate is shown by some of the highest grossing Hollywood films of all time –Star Wars: The Force Awakens and Fast and Furious 7– being filmed in Abu Dhabi, as well as a number of Bollywood films and regional productions.

Al Mheiri’s success formula for achieving this is simple, she says: “Customer centricity is the core of any business, and that’s not different in the media industry. We are successful if our partners are successful, which is why we look to do things differently. For example, ‘The Briefing Room’ is one of the many services that we provide for matching and connecting our partners with projects from around the region. It’s another way in which we are able to encourage community collaboration on a daily basis. I’ve always believed persistence is important in becoming a leader in your field– the process doesn’t happen overnight, but persistence will always pay off. Equally, you need to empower those around you to take responsibility. I like to tell my employees to think about the big picture, but always remember that the devil is in the detail. Success is not about the individual, it’s about the team.”

Apart from attracting the finest talent from overseas, Al Mheiri’s team is also focused on developing local potential. The 30% rebate helps with that as well, because one of its requirements is to have UAE nationals on set for the production. Furthermore, changing the youth’s perception of media as a viable career is also supported by various educational initiatives and the types of setup that twofour54 media zone allows, including twofour54’s entrepreneurship scheme and business center facility license, which is offered to content creation entrepreneurial startups. For Al Mheiri, however, entrepreneurship isn’t just a recent trend. “It is something that has been at the heart of our business since the very beginning,” she says.

“One of the keys to building a sustainable media industry is ensuring the value chain is strong across all points. The media industry is one of the world’s fastest-changing sectors, finding new ways for people to consume content, giving them the power not only to decide what they want to consume, but how they want to consume it. This is why startups are playing such an important role. They are the disruptors that are attuned to the changing demands of a relatively young audience, and they have the flexibility to adapt and innovate to meet these needs. And we have seen some incredible success stories, such as gaming firm Unnyhog, artificial intelligence data translator Narrativa, and online retailer Mumzworld.”

In achieving their goals, corporate leaders don’t need to bother about looking authoritative, observes H.E. Al Mheiri, advising them to pursue values of wisdom, respect, sustainability, and human development heralded by the UAE’s Father of the Nation, H.H. Sheikh Zayed bin Sultan Al Nahyan. “A leader should inspire and empower those around them with their wisdom and vision, yet always be humble and approachable,” she says. “They should ensure their team is built on tolerance and respect, not only for those with whom they work but everyone around them, regardless of their background or gender. And, of course, they should always be looking to the future, ensuring that their organization plays a positive role in society and helps to protect and preserve the world around them for generations to come. Being inspired by the late Sheikh Zayed seems to be Al Mheiri’s solution to all kinds of complications a leader may encounter and informs a lot of her conversation. “My career has been driven by my passion to deliver for my community and my country,” she says.

“Hard work, self-improvement, and contributing to society are my guiding principles, and ones that I practice every day in my personal and professional life. Whenever I have a choice to make, I ask myself one simple question, ‘What’s best for Abu Dhabi and the UAE?’ It’s simple: lead by example. I would never ask someone in my team to do something I wasn’t prepared to do myself. I want those around me to be part of our journey, not bystanders watching as we go by. I want them to understand what we are working towards, why and how they can contribute. This is a journey that we need to go on together, hand in hand.”

And when it comes to women being leaders in their respective industries, Al Mheiri’s approach is as practical and pragmatic as in all other areas of her career. She notes that women have always been supported in whatever they set out to do in the UAE. “I don’t see having a successful career as a matter of gender, it is a question of attitude and how you approach your work,” she says. “The UAE is a country that has always valued women as a key part of society, and nurtured and encouraged their development, both personally and professionally. But it is also a country that has always valued its human capital as a whole, so, my advice applies to everyone: male and female, young and old. Firstly, I believe to be successful, you need to listen and learn from those around you. Success is based on collaboration, not isolation. Also, think carefully about your reputation. After everything is said and done, this is the one thing you will be left with. It is vital that people understand the type of person you are, and know you will deliver. And never forget that we live in a country that believes in you, so it is up to us to seize the opportunities around us, and grow with our nation.”

Labor Shortage? Depends on Who You Ask.