Organized by The Assembly, a one-of-a-kind collaborative community makerspace and Smart lab located within the in5 innovation center in Dubai Knowledge Park, the not-for-profit initiative brought together learners, students, entrepreneurs and makers to learn and share hands-on tech skills, explore new ideas and bring them to life.

By Megha Merani July 22, 2019
Opinions expressed by Entrepreneur contributors are their own.
You're reading Entrepreneur Middle East, an international franchise of Entrepreneur Media.

A machine learning app for the blind, an augmented reality app to help make the roads safer, and mind-controlled games that help kids with attention-deficit/hyperactivity disorder (ADHD) were the winning student-designed prototypes at the second edition of Show & Tech, which took place in Dubai in June this year.

The top ideas triumphed over the more than 50 prototypes on display at the annual exhibition and competition that features innovative DIY projects contributed by tech enthusiasts of all ages from across the UAE.

Organized by The Assembly, a one-of-a-kind collaborative community makerspace and Smart lab located within the in5 innovation center in Dubai Knowledge Park, the not-for-profit initiative brought together learners, students, entrepreneurs and makers to learn and share hands-on tech skills, explore new ideas and bring them to life.

The projects on display at Show & Tech were whittled down from more than 100 submissions, organizers said.

“It was very rewarding to see twice the number of entries this year,” says Prashant K Gulati, founder, The Assembly. “We are very happy to help foster and encourage the next generation of innovators. We will continue to empower these entrepreneurs and creators through our workshops to enable more people realize their dreams.”

Related: Entrepreneurship Has No Minimum Age: Lessons From BizWorld UAE's The Kidpreneur Award 2018

For ALIVEAN, school kids Ahsan Nayaz, Aryan Krishnan, Mrudul Mamtani and Vraj Rajpura came up with the idea to build an app to help the visually impaired after discussing a video they watched that showed a celebrity helping a blind person. 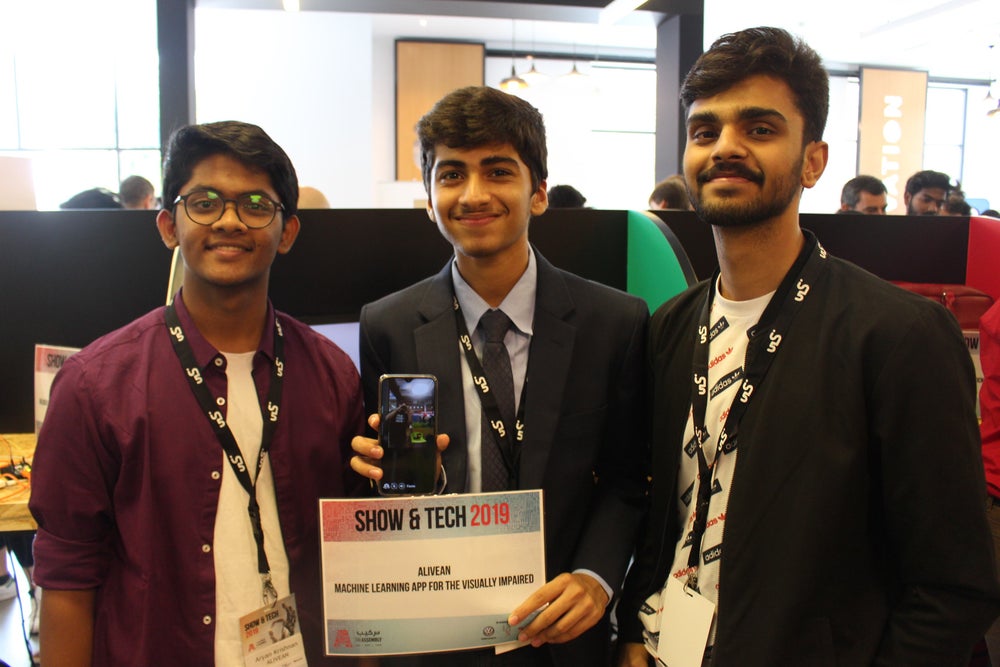 “The video was being forwarded on WhatsApp, and went viral,” Rajpura, 17, tells Entrepreneur Middle East. “It got us thinking that while this was a kind act, it really wasn't the ideal scenario. It's just boosting the celebrity's image, and that's what people are looking at. But what we felt was that the blind person was dependent on the celebrity for help, and so, we thought we should do something about it.”

Related: No One Said Building A Company Was Easy: Overcoming The Psychology Of The Tech Entrepreneur

The team, all students at Our Own English High School in Sharjah, developed ALIVEAN, a software that assists visually impaired users by using image classification and machine learning to identify objects in real time. The visual data, obtained using a smartphone camera, is converted into audio data, and relayed to users via earpiece. “It's a mobile app for now, but we are also working on a version for users to have the option to switch to glasses, so they don't have to hold a phone,” Rajpura adds.

Meanwhile, Road Rash No More is an augmented reality smartphone application for driver interaction. Developed by Ayesha Riyaz, Farhana Islam, and Jannatul Haq, students at the University of Wollongong in Dubai, the app aims to reduce road rage in drivers. 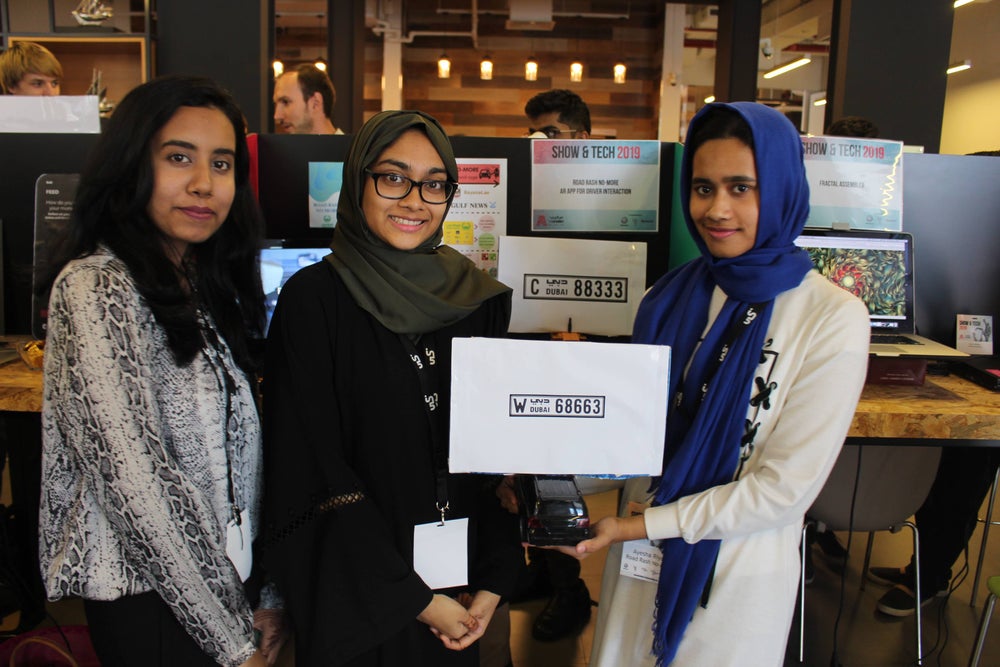 Drivers on the app can anonymously like or dislike the actions of fellow drivers to reinforce good driving practices while discouraging negative ones. Users can either tap the selection on the app, or use their voice to select an option. The car-to-car communication is carried out using Bluetooth, and the vehicle information is captured in real time using optical character recognition and object detection.

“The idea is to incentivize drivers with perks like discounts on insurance, or with Salik credit,” Islam explains. Meanwhile, those with dislikes can be supported with counseling sessions. “Instead of just fining drivers, we feel this could be a constructive approach,” the student says. “Maybe the person driving badly is under stress, or has undergone a trauma. Therefore, they can receive counseling for their rage and increase tolerance.”

And 16-year-old Rishabh Java is the brains behind Broccoli Brains, a range of subscription-based mind-controlled toys and online games developed to help children build focus and help students with ADHD, who often struggle with learning difficulties. 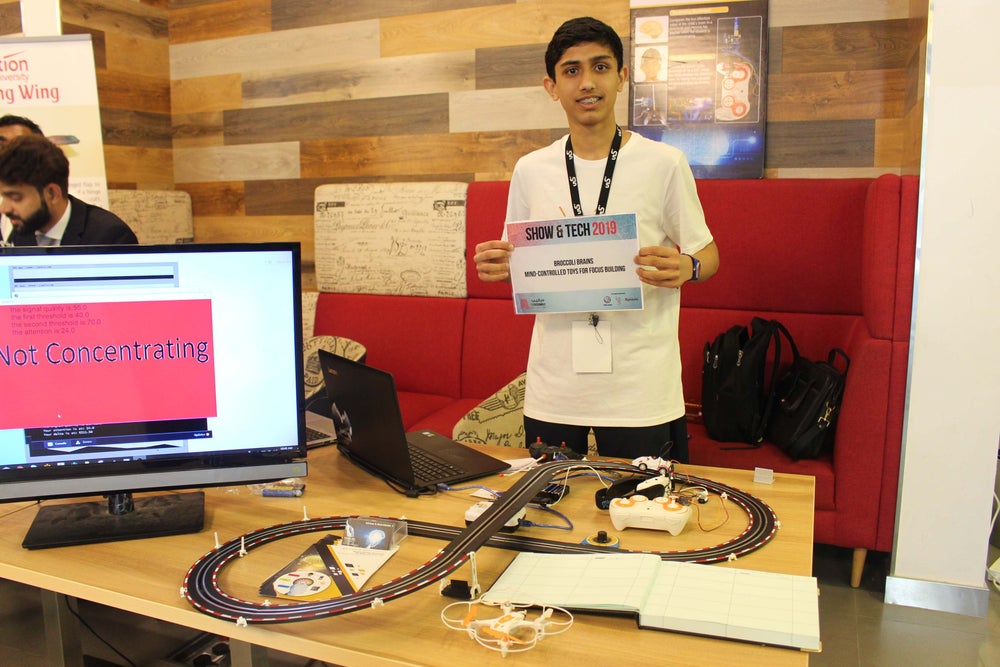 The toys are designed to build focus by incentivizing concentration, Java explains. For example, the mind-controlled toys require children to focus on them to get them to move, such as toy race cars on a track. “The toys make them want to concentrate to move the objects and builds their ability to think about a particular thing for longer than just a few seconds,” he says.

ADHD is a neurodevelopmental disorder affecting 11 percent of school-age children, according to US-based organization CHADD (Children and Adults with Attention-Deficit/Hyperactivity Disorder). Java, a student at GEMS Millennium School, is especially motivated to help because he's got friends and peers who deal with ADHD too.

Related: The Rise, Evolution And Future Of Branded Mobile Application Marketing In MENA

“People I know with ADHD go to doctors and are usually prescribed either one of two things– medication or exercises,” he says. “But these really don't work well at all. I have a friend who has landed in the hospital, due to side effects from the medication. There has to be a better way than just taking medication.”

He's been working in partnership with a team that includes a psychiatrist, educators and students. Data collected from the games will be used for research as well as to track user progress.

Java is set to launch subscriptions on his website broccolibrains.com this month, and he is also approaching hospitals and clinics to trial his products. He is currently fundraising to help with research and development.

A full list of all the projects is available at http://showandtech.theassembly.ae/projects.html.