The first thing you will notice about Rajkummar Rao, if you are lucky to meet the actor everybody is raving about these days, is his humility. The actor, busy with shoots in Mumbai, displays a calm demeanour as we settle down to what turns out to be an extensive, reveal-all-inner workings interview. The 34-year-old actor is brimming with wisdom on all things cinema as we probe his creative methods.

By Punita Sabharwal August 9, 2019
Opinions expressed by Entrepreneur contributors are their own.
You're reading Entrepreneur India, an international franchise of Entrepreneur Media.

BE THE HERO OF YOUR OWN NARRATIVE
There was a time when Shah Rukh Khan was the ultimate story of an outsider making it big in Hindi cinema. Turn many reels to 2019 and Rajkummar Rao has become the boldest outsider taking Bollywood by storm and giving India an entry to the Oscars – Newton. So many youngsters live the dream from their childhood to be the next Shah Rukh Khan of the industry but not many get to live it. Rajkummar Rao has clearly made his mark in the challenging industry. “I really don’t know how it feels to be an insider. As an outsider, you have to start from scratch,” says the actor in a matter-of-fact tone. Come to think of it, the beginnings have a cinematic touch.

Growing up in a joint family in Gurgaon, Rao remembers the weekend ritual of the whole family sitting together and binge watching Hindi movies. There are people who watch and move to something else after their piece of action and drama but Rao started seeing himself right up there someday. With age, his fascination of the stars and being one of them grew further. He started mimicking his favourites, whether it was Shah Rukh Khan’s famous romantic pose, which he further relived in one of his movies, or the power-packed performance of Senior Bachchan. The child in him was living that dream day in and day out. Soon, Rao joined an acting school in Delhi. Remembering the same, Rao shares, “I started enjoying the process of being somebody else. I just wanted to continue doing this all my life. Whenever I got a chance on stage or in school I kept doing it.” Once he finished college from University of Delhi where he tried his hand on stage, he went on to join the famed Film and Television Institute of India, Pune, to make his dream come true. Reminiscing those days, Rao says, “That taught me a lot about acting. That acting is deep.”

PLAY YOUR CARDS RIGHT
For Rao, the love for cinema has just got deeper. Talking about his early days in Mumbai, Rao says, “Initially, it was a struggle for the first two years, when I came to Mumbai in 2008. But I never had a plan B. This is the only thing I love

and I wanted to do this forever.” Every day he was meeting as many people and do as many auditions. One day, as luck had it, he met Dibakar Banerjee. He auditioned for his debut film, Love, Sex Aur Dhokha and eventually got selected and that changed the course of his life. Rao did not have a conventional start in Hindi cinema. His entry marked a new dawn in Hindi cinema, wherein a hero was no more the chocolate boy with the best of looks; Rao was being looked upon as the dark horse of Hindi movies. In 2010, Rao’s career was launched under Ekta Kapoor’s Alt Balaji Entertainment. He was confident that with this movie, his work will get noticed and it did.

Rao’s selection of films and roles has never been regular. From a newcomer and an unknown professional actor, Rao today has become a method actor who can pull off any role effortlessly. Within three years of his career, Rao received the National Film Award in 2013 for Shahid from the then President of India Pranab Mukherjee. From Newton to Trapped, he has floored audiences with his performance. In his upcoming release this year, Rao plays an entrepreneur in Made in China.

Though he has been an outdoor person throughout, going out with friends, Rao doesn’t enjoy attending parties. He likes spending time at home when not working. “I try to read something or watch something on the digital platform or travel,” says Rao.

He was lucky to enter the industry at a time that was ripe for change. Rao provided that much needed image of a hero who doesn’t look like a hero at an age when a different set of films like Love, Sex Aur Dhokha were being made. Rao was being looked upon as an actor for a different genre of films, not the same romantic movies audiences were used to.

There seems to be a strong entrepreneurial streak, too, in Rao. He never played safe. The characters he played in movies, including the latest Shahid, Judgementall Hai Kya, are bold and quirky. He has been constantly looking for out-of-the-box fearless moments. As an actor he didn’t just taste success basking in critical acclaim, but has seen commercial success with films like Stree which saw Rs 100-crore box office returns. So which character does he want to play next? “I am still exploring. I tried mostly everything. From comedy to love stories, I enjoy everything about acting. You give me a character and put me in his shoes, I enjoy that,” reveals Rao.

The Rise and Rise of Rao: From an Actor to a Superstar
Rao reflects on being the actor as a creative artiste. 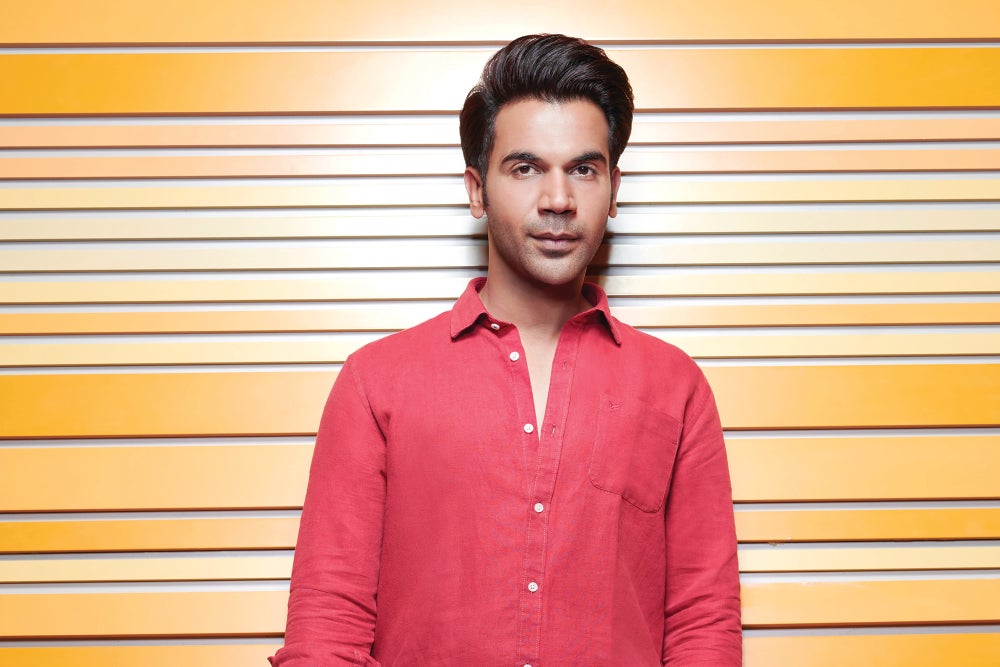 How have you evolved as an actor over these years?
Having spent nine years in the industry, I have grown on a human level as a person with more experience. I have grown as an actor with the kinds of filmmakers I worked with. There has always been a takeaway from the myriad characters I have played onscreen.

Which onscreen characters do you relate the most to?
Reel life for me is all about playing a character. We all behave differently in different situations. I try and be a different person each time I am playing a new character. The characters resembling my personality the most are Newton and Shahid.

What defines your choice of films?
I constantly try and do something which has not been done before. Playing characters that push my boundaries keeps me challenged and helps me grow as an actor. After five years, when I look back, I feel I could have done so much better in my earlier films. That is a process, a cycle that constantly evolves.

Do you perceive your choices as risky?
My decision to become an actor in this wide competitive film industry is itself a risk. But there is no life without risk. And the kind of characters we play are also risky but there’s no fun without risks and challenges. Taking any profession lightly won’t help you grow. We have to constantly keep challenging ourselves. For me it was never about the shortcuts but always about how I can push boundaries.

What keeps you going as an artiste?
By God’s grace, most of my films have been received very well. The problem lies when I think I am not giving my 200 per cent to a film or a character. As cinema is taking new shape, it is important for us to innovate and experiment as actors to remain relevant through our stories and characters. Exciting times are ahead for films!

What kind of research goes behind while working on a character?
For real life characters, the research is aggressive because people have known the person. I try and meet those people to understand my character well. In the case of Shahid, I got to know him through his younger brother Khalid besides reading books on him and seeing documentaries for his physical appearance. But when it’s a commercial entertainer like Stree or Bareilly Ki Barfi, you use your own imagination of the character. I start visualising the character when I read a script.

How intuitive are you as a person?
I go with my gut feeling. There have been times when I don’t listen to my heart, I listen to my own gut feeling and it didn’t work in my favour. Now that’s a lesson learnt. I always go with my intuition. When I am in front of the camera, I don’t plan anything. That’s the fun in cinema; if it doesn’t work, you can always do another take.

When not facing the camera, what do you like doing?
Whenever I get a chance, I try and visit a country or a place where I have not been earlier. Travel also makes me grow on a human level. I interact a lot with the locals and try to understand the history of a place. Not to forget, experimenting with food too. Apart from travel, I do like reading but I am more into watching. But it feels great to be a part of a story you are reading. I read Ayn Rand a lot. The Fountainhead is one of my favourite books. I think it is the book everyone should read every four years.

What is your take on competition?
It’s not easy for an outsider to make it big here. I feel it’s easier now because systems are way more functional. There are casting directors in the industry now. If you are talented, you know your work; sooner or later you will make it. You just have to pause and hang on.