"FortyGuard will become a $10 billion company within five years, and $100 billion in 10 years."

By Pamella de Leon September 22, 2021
Opinions expressed by Entrepreneur contributors are their own.
You're reading Entrepreneur Middle East, an international franchise of Entrepreneur Media.

When cities replace natural land cover with dense concentrations of pavements, buildings, and other surfaces that absorb and retain heat, this results in the creation of the urban heat island (UHI) effect, which then becomes responsible for increasing energy costs, air pollution levels, and heat-related illnesses. It’s thus to tackle this effect that’s especially prevalent in the Middle East that entrepreneur Jihad Sadiq launched his UAE-based enterprise, FortyGuard.

Launched in 2020 with the aim to reduce the risk of extreme heat waves caused by the UHI effect, this cleantech startup has built an urban cooling system that uses state-of-the-art proprietary sensing services, software platforms, and advanced industrial materials to mitigate expanding heat emergencies at local levels in a cost-effective manner. Sadiq was inspired to launch FortyGuard after seeing a Los Angeles municipality project in 2019 that painted roads with a white seal coat to reflect much more of the sun’s rays, and thereby reduce the impact of the UHI effect.

However, Sadiq found that this exercise was quite an expensive endeavor (its application cost about US$40,000 per mile), and it also turned out to be harmful to pedestrians and not operationally effective when executed at scale. That led Sadiq and his team to investigate alternative coatings that can mitigate the risk of heat, without changing the surface structure. Soon enough, through their engagements with international and local market players, the team concluded that such an offering did not yet exist- and they decided to make a solution by themselves, while also adding to a software monitoring tool to measure the UHI effect, and thereby help in strategic planning and the monitoring of success rates post-application.

With a mission thus to essentially cool cities, Sadiq says that FortyGuard’s urban cooling system operates as a “turn-key solution with a heat reduction capability” that’s able to mitigate expanding heat emergencies at local levels. “We utilize a two-layer sensing service to collect data from areas and roadways made of interlock or asphalt,” he explains. “FortyGuard’s software baselines the data to make better decisions; guided by our industrial technology and synced with the client’s objectives, we strategically place our material enhancement technology to reduce multiple surface temperatures in a cost-effective manner.” Be it on a school yard that uses interlock paving, or an asphalt highway running across a city, the startup’s offering can be used in a variety of locations like residential developments, car parks, cycling and jogging paths, schools, golf course facilities, marine ports and public and sporting arenas, among others. 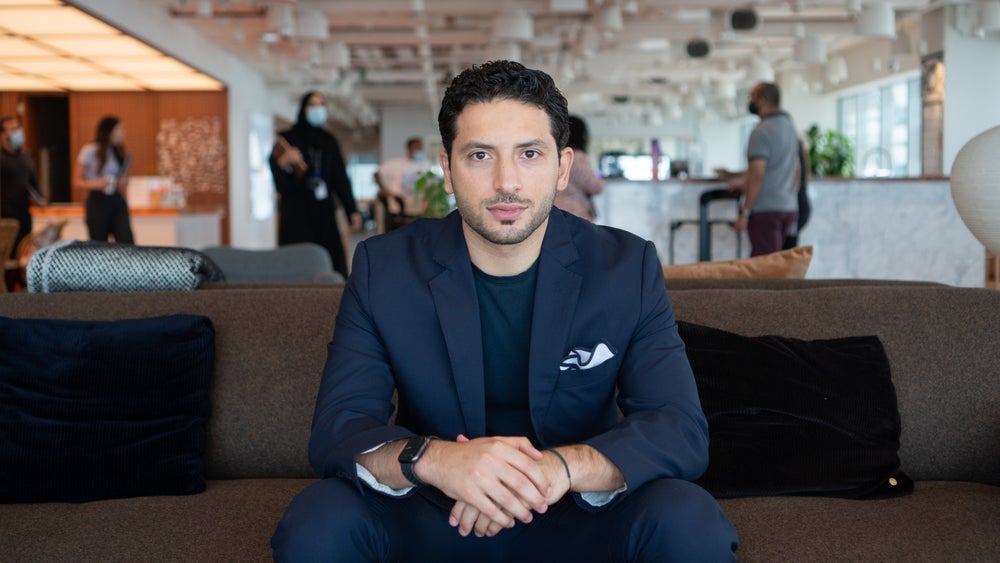 Born and raised in Abu Dhabi, Sadiq is a serial entrepreneur who began working in this realm at the age of 21 in Abu Dhabi, and has since racked up more than 15 years of experience in international business. The FortyGuard team currently consists of 14 people, who come from a range of experienced backgrounds in data, software, chemical, road, mechanical, industrial, environmental and aerospace engineering. Given how the startup tackles an issue that many may not be aware of, I was curious on his process of approaching prospective partners and clients without knowledge about this particular domain.

Indeed, Sadiq confirms that “roughly over 95%” of the clients and investors they met didn’t know what the UHI effect signified. “While many people definitely understand the pressing stress of heat in our cities, many of the people we engage with don’t understand the approach of addressing mitigation of heat through roadways, especially considering they make up to 40% of our city footprints,” he says. “This, coupled with their predominantly dark color, intensifies the energy imbalance. Funnily enough, when we started to pitch our idea, many investors were surprised that nobody thought about it from this simple position before. Naturally, this was hugely inspiring for us in the early days.”

As such, the team received positive reactions from UAE government entities they pitched the concept to. Indeed, the team had noticed that while there are many initiatives being launched to meet the UAE’s goal to reduce its carbon footprint of power generation by 70% by 2050, the impact that the country’s roadways could have on achieving a more balanced distribution of energy wasn’t really being talked about. Sadiq says that FortyGuard has concentrated on building partnerships with influential entities in the UAE that can influence the application of its tech in a broad, connective manner from a governmental level, and thereby have a holistic impact on the country and its residents.

“By engaging with the government and other international research institutions and corporations, we identified a strategic gap, established our business strategy to bring our technology to the market, and made sure that we are building it for a demand that exists,” Sadiq explains. “We have decided to establish and test our tech here in the harshest climactic conditions, before we take it to the wider region and the rest of the world.” 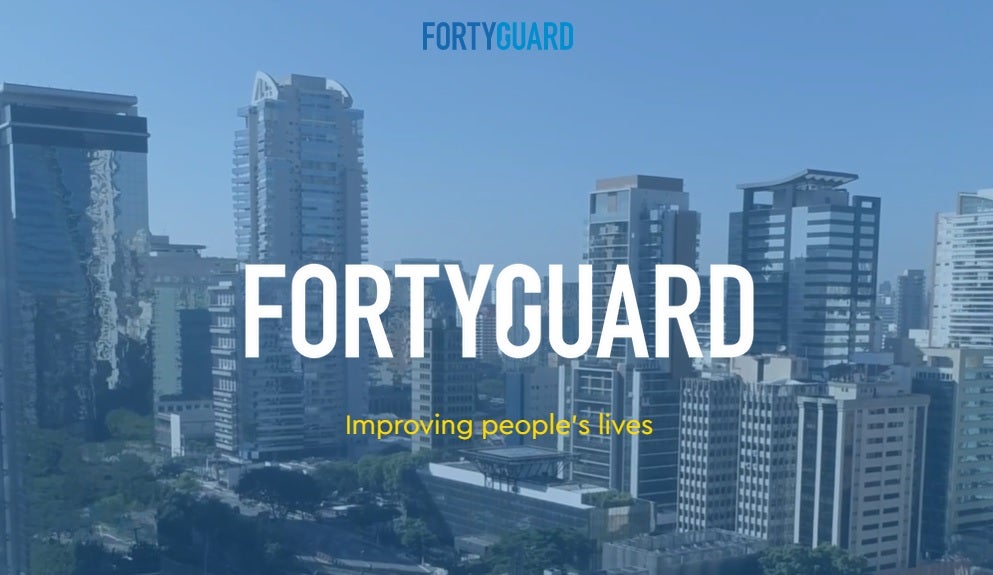 Today, the startup is backed by Abu Dhabi-based business incubator Hub71, having been selected as part of its latest program earlier this year. The incentives that Hub71 offers has proved to be hugely beneficial for the startup, with Sadiq saying, “Within days of receiving the amazing news that we had been accepted into the program, we were actively being presented to potential investors and partners.” But that’s not all- the venture was also recently accepted to be a part of the Mohammed Bin Rashid Innovation Fund (MBRIF) accelerator program. Sadiq says that the program has allowed his startup to advance its strategic direction and business model, while getting access to markets and clients, funding, talent and supplementary research, and services such as accounting, audit and legal, with technical support from market experts, as well as mentorship opportunities.

At the same time, the startup is also putting its enterprise system to use within Masdar City in Abu Dhabi. “The team at Masdar were interested to deploy the solution, because it’s fully integrated with the sustainable cities offering and supports providing efficiency to Masdar’s green-energy resources, while also bringing comfort to the outdoors,” Sadiq notes. Besides this, the team is also in the process of expanding its production capacity to work with other market leading organizations in the public and private sector in the UAE and the GCC.

Launching in a year that was headlined by the global coronavirus pandemic doesn’t seem to have deterred the startup at all- while the team spent their early days bouncing ideas in co-working spaces such as the Youth Hub in Emirates Towers, they transitioned into a remote work setup fairly easily as well. Today, the startup has a “small powerful team” with members spread across Abu Dubai, Dubai, Sharjah, Kuala Lumpur, and Virginia in the United States. As for the business itself, Sadiq says that the startup has potentially 1,300 private customers belonging to different disciplines like operators, contractors, developers and suppliers. “We estimate being awarded contracts in the UAE with a minimum fee of $78 million in the first 18 months of our roadway application commercialization, and we plan to target 6% revenue from $4.2 billion dollars spent annually in the UAE on roadway projects,” he elaborates.

As a self-funded startup, Sadiq admits that he and his team were concerned that funding for startups such as FortyGuard would be reduced rapidly through the course of 2020 and after. After all, many cleantech startups start operating with debt, Sadiq notes, and so, the startup made sure to have a clear strategy for its road ahead. “Our target today is not to prove that we are an attractive startup, but to generate enough traction to be the first in demand for the cleantech market, which is going to expand dramatically in the near future,” Sadiq says. “We keep shaping our technology and systems to offer an extensive commercial plan to disrupt or compliment current practices, and build a multi-skilled startup, offering solutions which can be used across a range of industries, aside from cooling cities.” 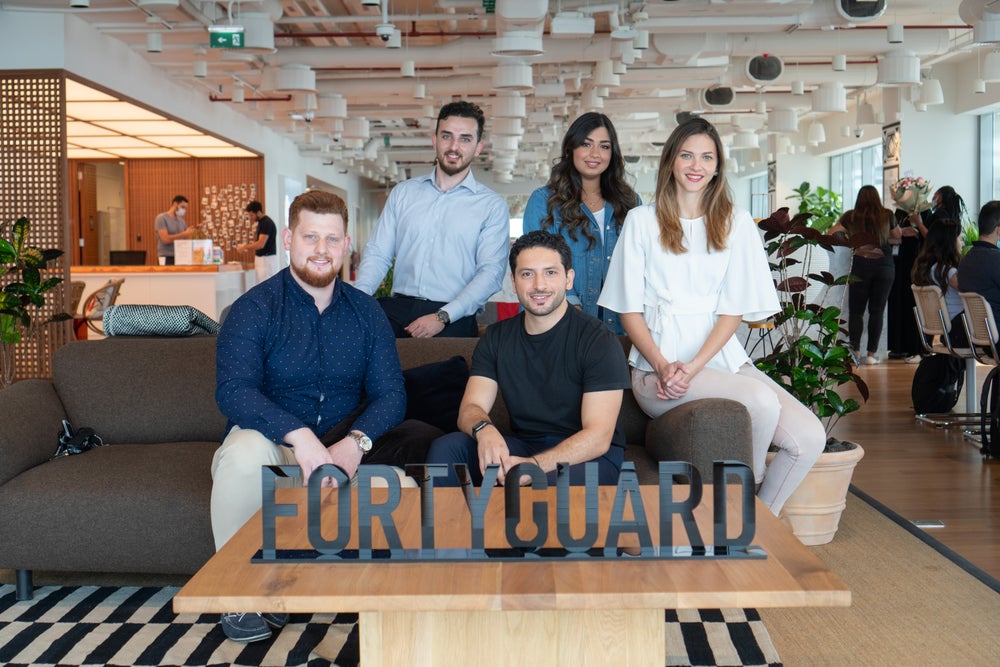 This would thus explain Sadiq and his team’s plans for FortyGuard in the short term. First on the list is to initiate a seed funding round later this year to continue its research and development requirements, while also continuing to develop a mandate for its technical requirements by engaging with vital policy makers in the UAE. Sadiq reveals here that following FortyGuard’s Masdar City project, the company has seen a lot of interest from other private and government partners to execute initial trials, which he and his team hopes will be followed up by commercial agreements.

In terms of long-term plans, Sadiq says he hopes to have FortyGuard go public in the next five years. “Until then, we plan to work with international operations to continue developing additional technologies, which will diversify FortyGuard’s offering for another 10 years and pave the way for our business to stay far from competition,” he says. “FortyGuard will become a $10 billion company within five years, and $100 billion in 10 years. Our team will never hesitate to make ambitious big goals. It might be daunting and perhaps risky, but the adventure, excitement, and challenge to prove our beliefs is what inspires us to maintain the momentum to succeed with our goals.” 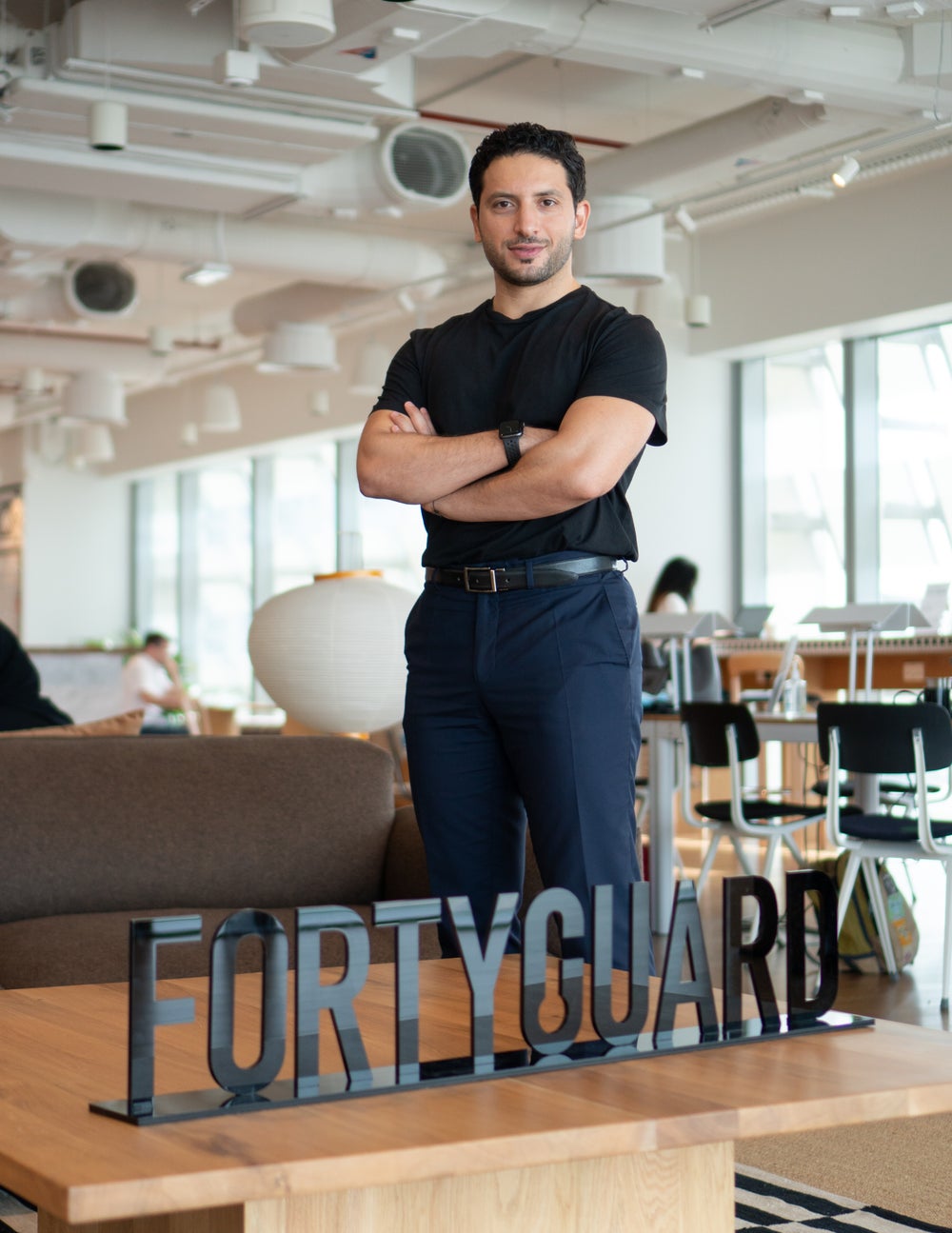 1. Keep the passion alive. “Stay insanely curious and passionate about what you are doing, embracing change for a new future, and with that future vision, be realistic about the opportunity and challenges you are facing. It takes a great team to build a startup, because the difference between winning and losing in the startup world can be directly traced to the team. Work with a group of believers to keep your negative tendencies in check, and balance each other, so the total is greater than the sum of the parts. Great ideas are not executed by one person; they are achieved by a team who believe in doing everything required to advance the company’s vision.”

2. Go directly to your customers. “Once you have identified an opportunity, try to bring innovation to the marketplace by directly engaging with your customers, showing them the solutions in the environment of their own problems, while discussing how those problems can be solved with those solutions you create. Often, it's easier to identify a problem or a solution from a position outside of a traditional industry, and your market-fit is essential to survive, coupled with funding.”

3. Don’t shy away from difficult conversations. “It is absolutely ok to ask for help, and it’s essential to listen to people who can tell you the things that you won’t like to hear. Founders with a clear vision and direction are very distinctive, but they will require getting advice from trusted advisories in order to achieve the reality of their visions. This, coupled with curiosity, passion, and pragmatism, are powerful tools for any startup.”

Related: Kitopi's Mohamad Ballout Is Aiming To Have His Cloud Kitchen Platform Dominate MENA (And The World) With A US$415 Million Funding Round Led By SoftBank