As someone who started cooking at the age of five in her native city of Ho Chi Minh in Vietnam, Nguyen is clearly at home in her role today as the Executive Chef of Vietnamese Foodies, the award-winning homegrown restaurant franchise that she founded in 2018 in the UAE.

By Aalia Mehreen Ahmed March 17, 2022
Opinions expressed by Entrepreneur contributors are their own.
You're reading Entrepreneur Middle East, an international franchise of Entrepreneur Media.

There is a popular proverb that goes, "If you want to go fast, go alone. If you want to go far, go together." And when preparing for my interview with Vietnamese Foodies owner Lily Hoa Nguyen, I came across multiple instances of her journey so far that almost instantly reminded me of these lines. As such, I was pleasantly surprised when Nguyen used the same saying in her responses to one of my questions. "If you wish to get ahead in your business, then you need to make sure that people work well together," Nguyen says, and then goes on to quote the aforementioned aphorism, while adding, "Growing up in a big family of six taught me that there is a place for everyone in a team, and everyone has their own strengths and weaknesses."

As someone who started cooking at the age of five in her native city of Ho Chi Minh in Vietnam, Nguyen is clearly at home in her role today as the Executive Chef of Vietnamese Foodies, the award-winning homegrown restaurant franchise that she founded in 2018 in the UAE. Since then, the restaurant has become extremely well known for its take on fresh and authentic Vietnamese cuisine, with everything from its flavorful pho to its hearty banh mi sandwiches finding favor with the people of Dubai. With four branches spread across the Emirate, Vietnamese Foodies has been the recipient of several industry awards and accolades, and as the brand has grown over the years, so have Nguyen's leadership skills.

"When we used to be in one small location in Dubai's Jumeirah Lake Towers (JLT) neighborhood, leading the team was about being a role model, and showing the team the standards to follow," she says. "Today, with four locations leading our Vietnamese Foodies team, it's about finding the right people for the right job, and giving them the tools to thrive and develop beyond their limits. Leadership now also means developing the right strategy to recruit talent from within and outside the UAE, and crafting the most effective retention policies."

For Nguyen, launching the fourth branch of Vietnamese Foodies in December 2021 at Dubai's Nakheel Mall in The Palm has been the biggest achievement of her entrepreneurial trajectory so far. "The newly opened location is located right alongside international chain restaurants such as Din Tai Fung, Le Pain Quotidien, and Starbucks, and we are also receiving our fair share of business from shoppers," says Nguyen. 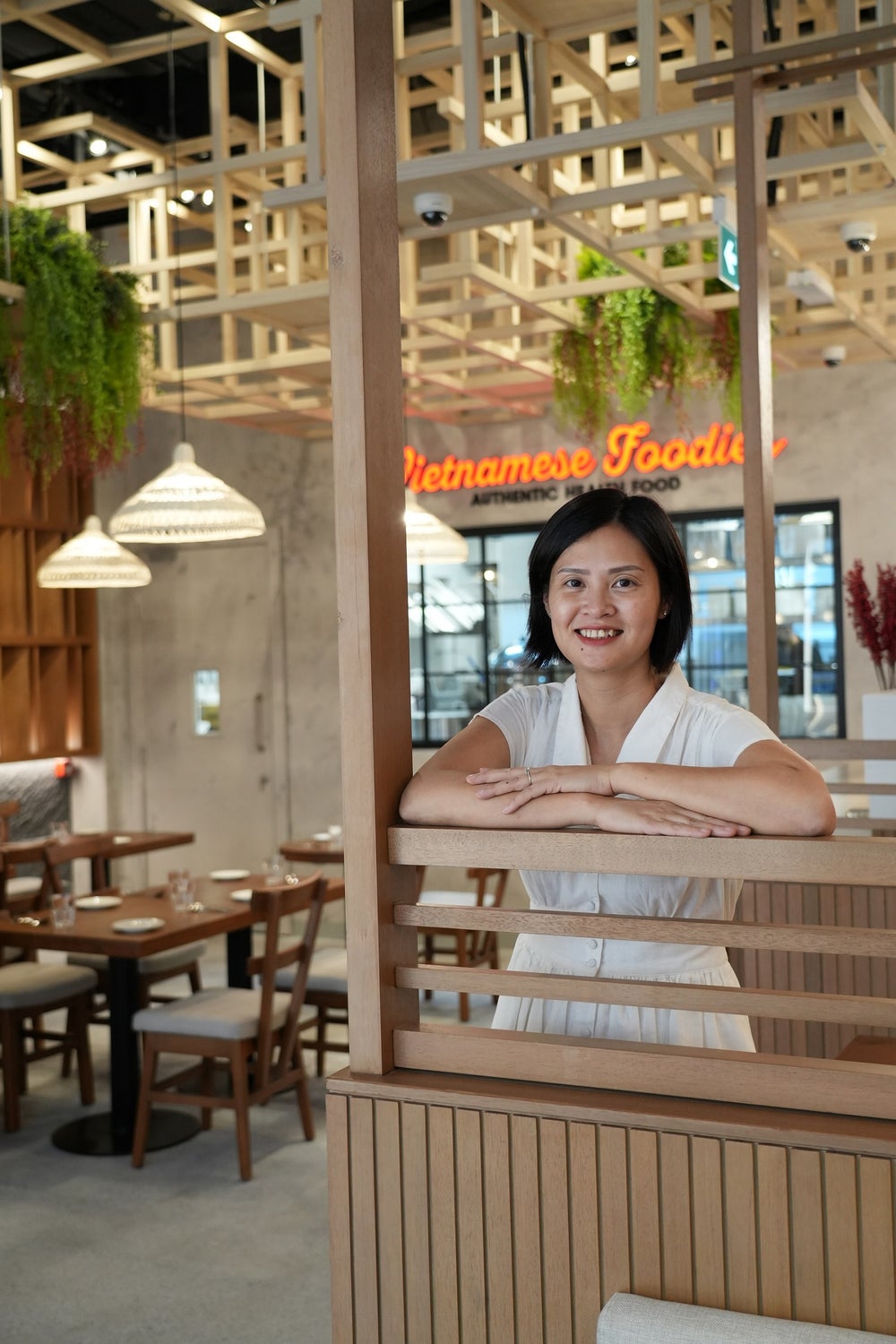 "This showed us that we are being considered and chosen at the same level of quality and value for money with international brands that are a lot more established. This, in particular, has made me so proud!" But ask the founder what, or who, she attributes this quick growth to, and she only has one answer: her employees. "It has been said that a restaurant is only as good as its people," says Nguyen. "To me, the people of Vietnamese Foodies are the most valuable assets that we have. They give us the competitive advantage against many other businesses in the same market segment."

Here, I ask Nguyen if her upbringing had any influence on the leader she is today- cooking with a big family is, after all, a task that requires strong interpersonal skills. "When I was still cooking from our family kitchen, I was sometimes assigned to cook for family meals for 20 to 30 people, and I had to employ help from anyone I could get a hold of," Nguyen recalls. "I think that experience taught me that harmony is very important in running a kitchen and running a business. It is very difficult, if not impossible, to make someone do something using authority alone. You need to somehow inspire them towards achieving the same shared goals. Only when you are able to do that will you be able to lead big groups of people."

Nguyen's words are perhaps best reflected in how Vietnamese Foodies' annual celebration of the Chinese Lunar New Year's "red envelope" tradition, which is catered specifically towards acknowledging her employees's efforts. In East and Southeast Asian cultures, a red envelope is typically used to gift money during holidays or for special occasions, and for Vietnamese Foodies, the occasion of the Chinese Lunar Year sees all profits generated on the day are handed out in crimson covers to the staff as tokens of gratitude for their hard work at the enterprise. 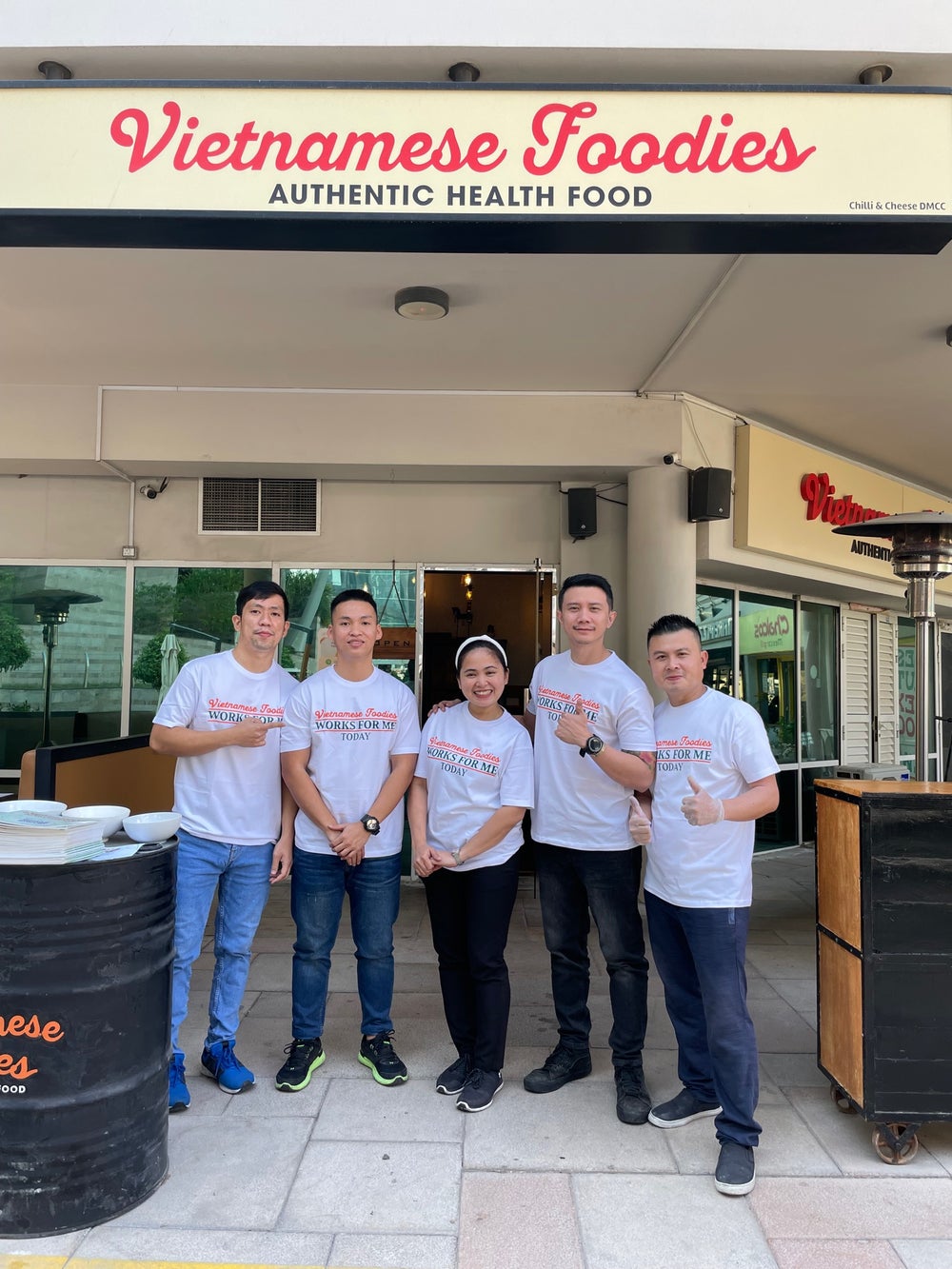 This year's event, held on January 31, saw all four of the restaurant's branches partaking in the event, which ended with all 71 employees being treated to a cruise boat party as well. "The most rewarding moment of the day for me was when I distributed the red envelopes to our people, knowing that some of that money is going to their country to support their families," Nguyen recalls. "I am blessed to think that Vietnamese Foodies is a stable corner of their lives, and that we are able to touch many people's lives through it."

While this style of leadership is one that Nguyen takes pride in, it isn't one that is necessarily adopted across the UAE's hospitality industry, she admits. "Personally, I think more can be done to take care of people in hospitality, because the F&B sector and wider service industry is a very labor-intensive sector, and to elevate the service level overall, we need happy people in the workplace," says Nguyen.

"Having said that, Dubai is also a high-cost market, and the number of people that businesses can afford to employ is much lower than many other markets. This poses a dilemma for restaurant operators, especially small operators like us." Nguyen thus believes the industry needs to put in more work to ensure better retention policies. "What we need to do is to think of a long-term solution to retain people in order to reduce recruitment and visa fees, and instead use that to invest in a retention program," she adds.

Related: By Reinventing Dates As Gourmet Treats, Kimri Founder Sara Saleh Is Aiming To Bridge Cultures With Her F&B Brand 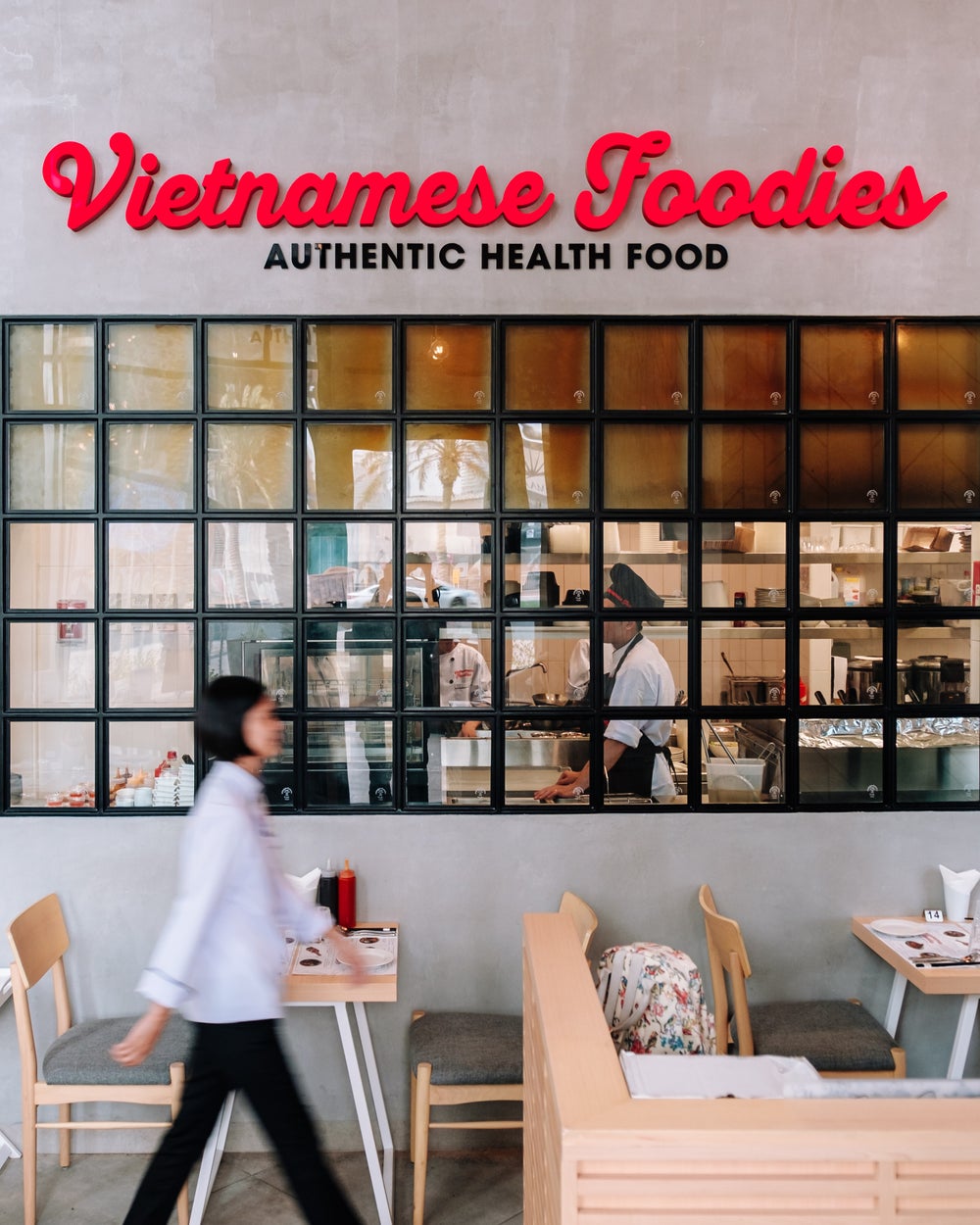 It is this kind of attention to the finer details that has governed Nguyen's strategy for business growth too. The founder says she and her team meticulously worked towards ensuring they followed through on their expansion plans. "Being focused and consistent in our product offering, but at the same time, ambitious in expanding our footprint, has contributed to our quick growth in Dubai," says Nguyen. "Instead of introducing different concepts, we try to fine-tune Vietnamese Foodies menu to the best offer possible, and replicate that offer in different locations within the city. That way people can expect to receive the same service and culinary experience in any of our four Vietnamese Foodies locations."

In fact, this approach encapsulates the vision Nguyen has had from day one of her entrepreneurial journey. "When Vietnamese Foodies JLT just opened, in the very first few months itself, I had a dream that I would like to, one day, see pho restaurants and banh mi stands in every corner of Dubai, and that dream is slowly becoming a reality!" Indeed, further growth is on the cards for Vietnamese Foodies, Nguyen says. 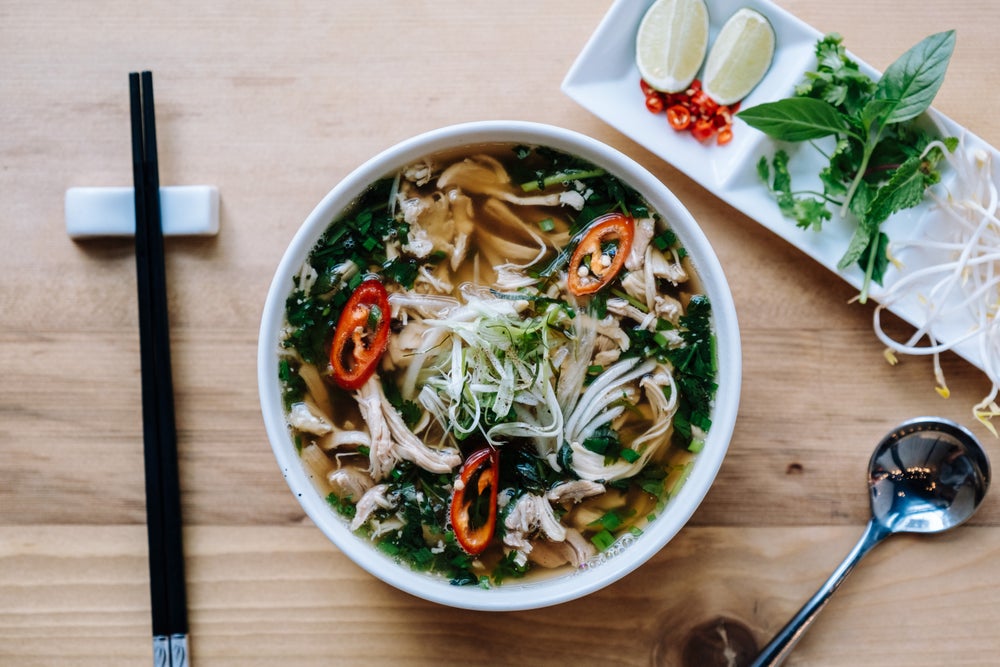 "Part of our mission is to make Vietnamese Foodies available for people in every corner of Dubai, and the entire UAE in the near future, so our goal for 2022 is to open one other location," she says. "We are also working to refine our menu to make sure that we keep offering the same delicious healthy food that we have become known for and excite our customers with new offers at the same time."

As Nguyen looks back on her journey so far, she admits there have been a few hiccups along the way. The founder is, after all, a female, Vietnamese chef leading a franchise in a primarily male-dominated industry that doesn't often see Asian talent at the helm. "Both gender and race biases are existing challenges for many in the Middle East, including myself," Nguyen admits. "But I just don't let it bother me too much, and with my tenacity, I have created my own table, where I'm sitting at the head."

3 Expert-Backed Strategies for Staying Calm in Times of Confrontation